When Mystery Science Theater 3000 aired the final episode of its tenth season back in 1999, it was practically unknown in India. Colloquially known as MST3K, the show was about a guy and his two robot friends riffing to keep themselves sane, while being forced to watch the worst of B-movies, with everything happening in real-time.

MST3K has never aired on TV in India, or seen a single DVD release. Even the piracy route was of little help, and got you access to inferior quality versions of only half a dozen episodes. And though YouTube now has most of the early collection, the site's length restrictions back in the day made it far from convenient.

That changed in November 2015, when MST3K creator Joel Hodgson announced a crowdfunding campaign, with the intent of bringing the show back to life. Despite some scepticism from some corners, the project broke Kickstarter records, garnering more than $6 million (about Rs. 38.7 crores) to produce 14 new episodes.

In July the following year, Netflix picked up the series reboot, and put it in the capable hands of Elliott Kalan - former head writer of The Daily Show - along with Community alums Dan Harmon and Joel McHale. Netflix's clarification that it wouldn't be a global release was a slight bummer, but with a good VPN you can still access this gem via the US, Canada, UK, Ireland, Australia, and New Zealand. 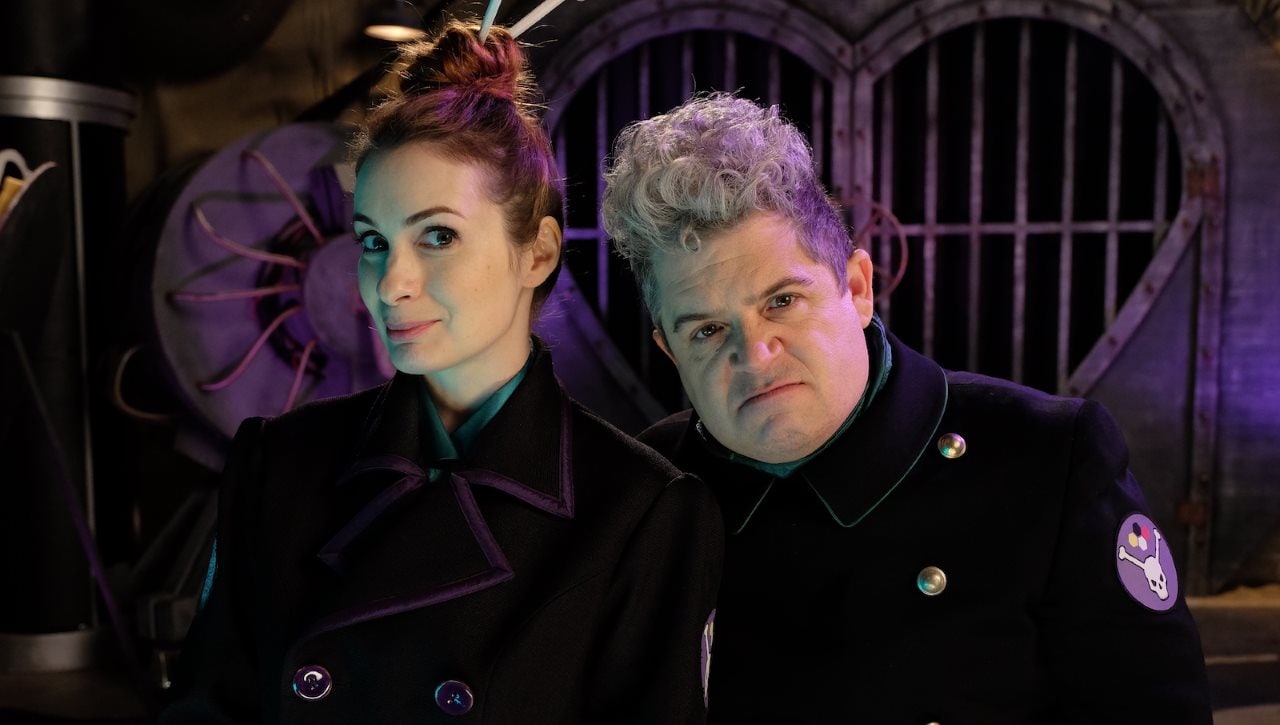 (L-R) Felicia Day, and Patton Oswalt in a still from Netflix's Mystery Science Theater 3000: The Return

The show's format is as simple as it was in the old days. Though the series is meant for its loyal following, the first episode does the job of introducing itself to potential newcomers. Felicia Day and Patton Oswalt play two mad scientists, Kinga Forrester and "TV's Son of TV's Frank" respectively, both names call-backs to the scientist characters on the original series. Replacing Hodgson in the jumpsuit is comedian Jonah Ray, who is kidnapped by the "Mads", and put into orbit aboard the Satellite of Love for an experiment that involves terrible movies. To keep himself sane, he constructs two robot friends - Crow (Hampton Yount) and Tom Servo (Baron Vaughn) - to keep him company. Together, the three riff on said movies, be it the lacklustre acting, nonsensical plot, or the production chops.

The show's revival/ reboot - or return, as Netflix is calling it - maintains what the show beloved to its die-hard fans. It's still an hour and a half long despite Netflix's freedoms. The ad-break cuts, meant for broadcasting, are still there with Oswalt announcing and reminding us what we were witnessing despite there being no actual ads. The other segments, involving enactments of the movie's tropes and "invention exchange" are all still there, as well.

The Mads base has moved to the Moon now - it's called Moon 13, instead of Deep 13 - and they have an in-house band called The Skeleton Crew. On the production front, the new MST3K benefits from higher detailing and superior cameras, and it still somehow has that feel of a local theatre production, like a bunch of passionate high school kids come together by their shared interest for all things pop culture.

That's obvious from the opening episode, which features 1961's Danish monster flick Reptilicus, which contains references to Finding Nemo, Breaking Bad, and Jacques Tati. Later episodes involve a lot more - Die Hard, and Apocalypse Now's famous lines get a nod, and the likes of Lost, Saturday Night Live, The Groundhog Day, and Memento are acknowledged as well. The writers' wide-ranging approach to pop culture humour and satire stems from their predecessors, who had a habit of packing in so many jokes and references that it was always best enjoyed by those who were as nerdy about their entertainment as the subjects on the Satellite of Love.

Best of all, the new MST3K retains its original's penchant for paying attention to the smallest of details on screen, be it the topography, artefacts, transitions, or even the font. In a later scene from Reptilicus, with the film trying to build up tension with lightning, Crow remarks: "Nobody's going to notice if we use the same lightning shots, are they?" To which, Tom replies: "Are you kidding?! They'd have to be geniuses!"

Taking on the film's obvious low production values, and the props used for the monster scenes, they remark how Reptilicus is really just on a turntable, its bobbing head a flywheel mechanism, with a model tank being pulled by a string on a bed of tree made of sprigs of rosemary.

That theme re-emerges in the sixth episode, 1978’s Starcrash, where they jokingly point out that the spaceships seem to be made out of salt pepper shakers, paper cup dispensers, a Thermos, and a Rubik's cube. And they are quick to call out the film's obvious inspirations, labelling a ship "a crude knock-off of the Millennium Falcon"; and when someone utters "Have faith, and never give up hope", Crow is quick to butt in: "I was going to say, 'May the Force be with you' but just forget it."

As always, some of the best zingers are reserved for the cringe-worthy and laughable stupid dialogues that are naturally part of B-movies. After a character refers to himself as "Prince of the League of Darkness", Tom chimes in: "It's a working title, but you get the drift."

One of the nicest things about MST3K was its capability to feel natural, which almost made you feel you were hanging out with them. This reboot version perfectly captures that feeling. As effortless as it may seem, it takes careful writing and re-writing, with call-backs and elaborate set-ups to keep you from staring away at your phone, that can easily happen with films that seem to induce sleep. (L-R) Crow, Jonah, and Tom in a still from Netflix's Mystery Science Theater 3000: The Return

The jokes extend beyond pop culture, too, with a bunch of practical jokes and other 21st-century references crammed in all over the place. When Kinga asks about ratings in episode one, TV's Son - or Max, as she prefers calling him - tells her that Netflix doesn't do those. Aboard the satellite meanwhile, when Tom Servo makes a joke that doesn't please Jonah, he unscrews the top of his head and throws it away.

And thanks to MST3K's cult following, big-name celebrities show up in unmarked cameos this time around, including Jerry Seinfeld, Mark Hamill, and Neil Patrick Harris. Seinfeld appears as a famous inventor called Freak Masterstroke during one of the "invention exchange" segments, and asks the Mads what they are up to. "I'm driving a man mad by showing him bad movies," Kinga explains.

In a jab to how entertainment has evolved, he points out the lack of "audience interactivity" and "second-screen experience", and tells them to take the human subject and his two robot friends and turn them all into apps. "Now they live on your phone. And now," he pauses to let Kinga and Max finish his sentence, "you got something."

Funnily enough, thanks to Netflix, MST3K does live right on my phone now. And just like that, the show's return - after an incredible gap of 18 years - is proof that even the wildest dreams can come true for fans thanks to our new golden age of television. Finally, we’ve got movie sign again.

Further reading: MST3K, Netflix, Seinfeld
Akhil Arora Email Akhil
Akhil Arora covers entertainment for Gadgets 360, interviewing stars such as Christian Bale and Anurag Kashyap, covering series premieres, product and service launches across the globe, and looking at American blockbusters and Indian dramas from a global socio-political and feminist perspective. As a Rotten Tomatoes-certified film critic, Akhil has reviewed over 150 movies and TV shows in over half a decade at Gadgets 360. When he is not completely caught up with new film and TV releases, Akhil ...More
Trump to Seek Changes in H-1B Visa Program to Encourage Hiring Americans
Essential's Bezel-Less Smartphone Spotted With Snapdragon 835 SoC in Benchmark

product Jonah Ray steps into the role of the human captive forced to watch B-movies as an experiment, with robots Crow and Tom Servo keeping him company.