Netflix's Mute by Duncan Jones Is More Warcraft Than Moon

When Duncan Jones announced that he was finally making Mute, a sci-fi mystery thriller that was intended to be his first feature, but had long wallowed in development hell owing to a lack of studio support, it was cause for celebration. The writer-director had proved himself in the sci-fi genre with the 2009 sleeper hit Moon, and followed it up with the 2011 Jake Gyllenhaal-starrer Source Code, and so despite the disappointment that was his adaptation of the video game Warcraft, there was genuine interest in seeing Jones' passion project come to life.

The final product, released Friday on Netflix worldwide, is a disaster of epic proportions. Mute includes a terrific trio of actors, Alexander Skårsgard (Big Little Lies), Paul Rudd (Ant-Man), and Justin Theroux (The Leftovers), but the writing is so poor, tone-deaf, and all over the place that it feels like Jones has forgotten what movie he was trying to make in the years he kept waiting for the greenlight. Or he never had a good script in the first place. It wastes the potential and capabilities of its award-winning actors, either by not giving them enough to do, or hiding them under comical hairpieces.

The film is split between two threads that slowly intersect. One follows a Amish bartender named Leo (Skårsgard), who had a terrible boating accident when he was little that left him mute after his religious mother refused to let the doctors even attempt to help him. He now lives and works in near-future Berlin – Jones said he was heavily inspired by Blade Runner, and the influences are quite obvious – at a swanky nightclub/ robot strip-club called Foreign Dreams, alongside his blue-haired girlfriend Naadirah (Seyneb Saleh), who works as a cocktail waitress.

The other narrative strand follows a pair of US army surgeons gone AWOL: Rudd as "Cactus" Bill, sporting an overgrown horseshoe moustache, a man with a short fuse; and Theroux as Duck, in a long blonde wig and round glasses, who's always got an eye on young girls. The two are homoerotic best friends and partners-in-crime, who make easy money by patching up wounded friends of Berlin's underworld. For Bill, this also helps him curry favour with the owner of Foreign Dreams, who's promised Bill a way out of Germany with his young daughter.

One night at the club, Naadirah gets eyed by a likely-drunk customer, and when he keeps pestering her, Leo gets rough, leading to an altercation that draws a warning from his employer. If the situation is ever repeated, Leo will be let go. So when the customer returns the following night, and teases him about his girlfriend who isn't around, good boy Leo gets all worked up again and gets himself fired. But soon, there are bigger problems: Naadirah is nowhere to be seen, a night after breaking down and telling Leo that she's harbouring some secrets.

What should be a signal for Mute to move into a higher gear is completely ignored, and after hitting the same beats again and again, the film displays a complete lack of knowledge about plot direction, tonal momentum, and character development, and it doesn't even substitute those with action set-pieces. While Skårsgard is limited to a choice few expressions, which renders his performance monotonous and boring, even Rudd and Theroux's best attempts to inject some fun into their roles go ultimately nowhere, as the script has nothing to provide.

Nowhere is that more obvious than in the film's last half-hour; it ought to be an achievement if Netflix subscribers can even get to this point. Mute completely fumbles an unnecessary paedophilia subplot that it had introduced as an insensitive joke – two characters come to grips with each other in one scene, and then go get drunk at the mall in the next scene, as if the previous scene never happened – and the film then stumbles through multiple incomprehensible climactic scenes, each somehow getting progressively worse, again botching how to depict paedophilia. 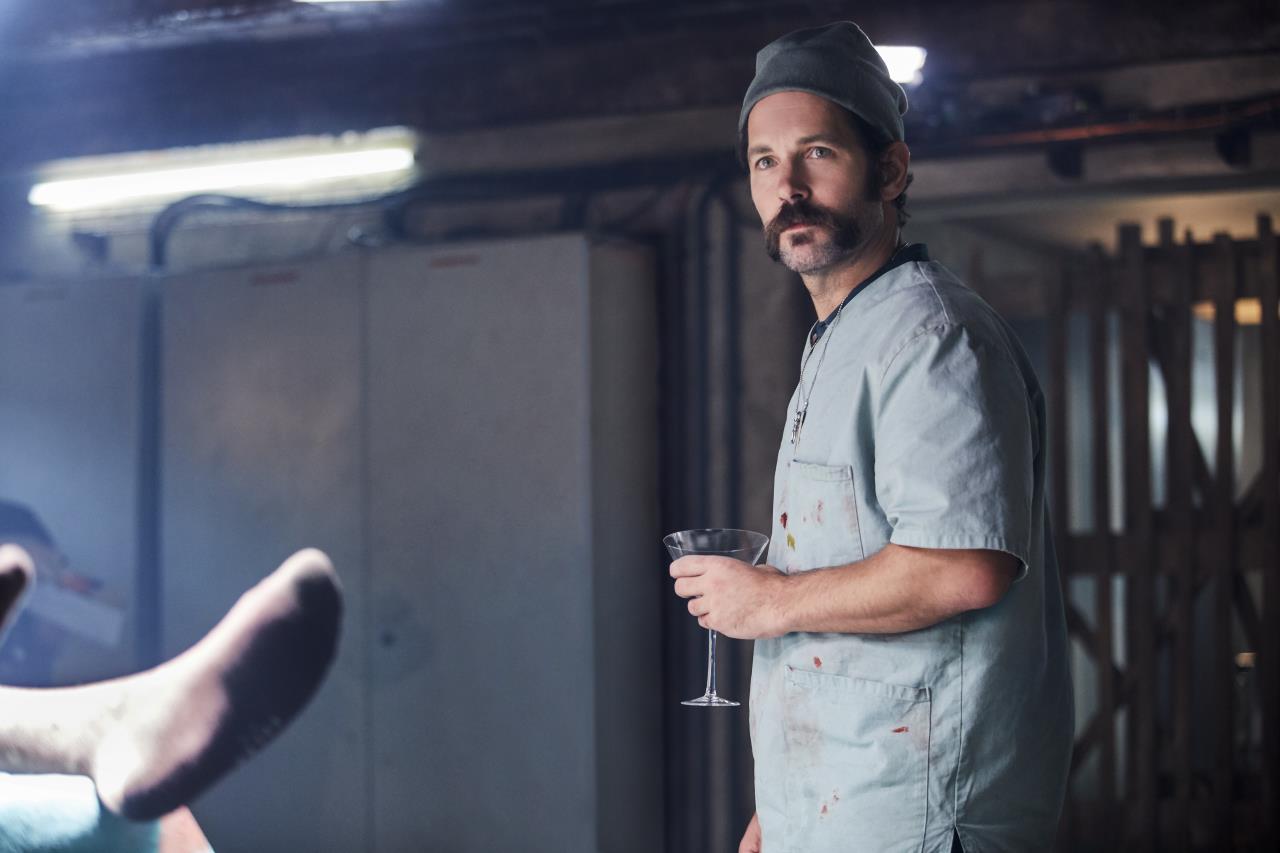 It's never even clear why Mute needs to be a sci-fi film set in near-future Berlin, aside from the director's wish to explore his love and admiration for Blade Runner, and make references to Moon's Sam Bell, giving us an indication of the character's future. The film's storyline would virtually be unaffected if it were set in the present, except for one turn of events where Leo finds someone's address by inputting their phone number in a drone-delivery meal service. The film stays mute on the privacy implications though. There is only one real advantage of Mute's futuristic setting: the visuals.

Were the plot not such a distracting dud, Mute could be enjoyed for the work of cinematographer Gary Shaw (Moon), production designer Gavin Bocquet (Star Wars prequel trilogy), and set decorator Bernhard Henrich (Bridge of Spies). The film has everything going for it in the visual department – doused in various shades of blue, every frame in the film is framed and lit brilliantly, and immediately commands your attention. It's a shame their very good work has been drowned amidst what is otherwise a complete waste of time.

As the big studios have pulled funding from mid-budget genre undertakings, it's laudable that Netflix has come to the aid of film-makers who are in need of a big canvas and have an original vision, but their stories are unfortunately not Star Wars, a Disney fairy-tale, or a superhero property. But every time a writer-director with the name recognition of Jones delivers a work of this level, it only serves to prove those risk-averse studio executives right.

product Mute is streaming on Netflix. The director of Moon and Source Code returns to his fertile ground of sci-fi, with disappointing results.
Comments

Further reading: Mute, Netflix, Duncan Jones
Akhil Arora Email Akhil Akhil identifies himself as a stickler for detail and accuracy, and strongly believes that robots will one day take over most human jobs. In his free time, you will find Akhil beating the computer at EA Sports FIFA or streaming new highly-rated TV series. More
Nissan Starts Testing Semi-Autonomous Rides, Glitches or Not