Made in Heaven, Amazon Series About Indian Weddings, Is Both Big and Fat

Made in Heaven: Arjun Mathur and Sobhita Dhulipala in Amazon Prime Video series

“Just crazy, rich people getting married,” Tara Khanna (Sobhita Dhulipala, from Raman Raghav 2.0) says in reply to her best friend Faiza Naqvi (Kalki Koechlin, from Margarita with a Straw), after she enquires about her hectic day, in a scene from an early episode of the latest Amazon original series from India: Made in Heaven. Tara is a wedding planner who co-runs her own studio, named after the show, which is itself adopted from the central tenet that marriages in India are “made in heaven”. Her remark is a crude approximation of what the show is about — you can think of it as Crazy Rich Indians — though it doesn't quite capture what the show wants to be.

Its creators, the Gully Boy duo of Zoya Akhtar and Reema Kagti, have claimed that Made in Heaven is meant to be a satire of the extravagance of Indian weddings, but in practice, it's more a display and celebration of the culture alongside perfunctory remarks about the social ills, monetary waste and family one-upmanship. Akhtar and Kagti co-wrote the show with Lipstick Under My Burkha writer-director Alankrita Shrivastava, while Baar Baar Dekho director Nitya Mehra served as the showrunner. Akhtar, Shrivastava, and Mehra also directed several episodes.

As a concept, Made in Heaven will be slightly reminiscent of the Ranveer Singh, Anushka Sharma-starrer 2010 film Band Baaja Baaraat to mainstream audiences. In its ambition, the hour-long Amazon series — out now on Prime Video globally — has the same lofty aims as that of the 2016 half-hour Voot series Shaadi Boys, which too attempted to offer a critique of the hubbub around weddings. And with its execution, Made in Heaven feels a tiny bit like Mad Men, in that the client pitches swap ad campaigns for wedding plans, and the professional lives reflect on the personal ones.

But its decision to adopt an episodic structure — there's usually at least one wedding per episode — gets in its way. By maximising the use of Amazon's big budgets at its disposal, Made in Heaven turns into a reality series that's about “big fat Indian weddings” at times, not realising that it could use that time — and effort — to deepen its characters.

Speaking of characters, Made in Heaven focuses on two co-founders of the eponymous Delhi-based wedding planning agency. There's the aforementioned Tara (Dhulipala), an unapologetic go-getter who married into the city's uber-rich circles by way of entrepreneur Adil Khanna (Jim Sarbh, from Neerja and Sanju). The other one is Karan Mehra (Arjun Mathur, from Brij Mohan Amar Rahe), an expert liar and a half-closeted gay man, who has a habit of borrowing money from seemingly everyone. And there are a couple of supporting characters, in Titli stars Shashank Arora and Shivani Raghuvanshi playing the in-house cameraman Kabir Basrai, who also serves as the narrator, and new employee Jaspreet “Jazz” Kaur, who hails from a lower socio-economic stratum.

Made in Heaven is mostly set in the upper echelons of Delhi though, a world that's a mix of spoken English, Hindi, and Punjabi — in that order — and is full of unimaginable riches, demands and egos. It's why Tara and Karan aren't just wedding planners. Either willingly or unwillingly, they are also crisis managers, having to intervene in the personal matters of the ones getting married and their extended families. That makes for easy pulpy drama and Made in Heaven is more than eager to give into that, on more than one occasion, to cater to audiences that crave a more polished form of Indian soap operas. Alongside, each new marriage presents an opportunity for the show to bring out its satirical paint-brushes while also using them to draw parallels between the wedding shenanigans and its central characters.

The attempt to address the social ills and mores that exist in Indian society, which are particularly heightened during weddings — a time when the family is supposed to be at its best — is commendable. But unfortunately, beyond its aforementioned perfunctory treatment of those topics, the show's ostentatious display of “big fat Indian weddings” is way too sincere to come off as ironic, and the writers seem a bit clueless as to what the best way there is to call it out and critique it. In their desperation, Made in Heaven turns to the most ill-advised of tools: voice-overs. Film is a visual medium — it's why the principle “show not tell” exists. By having Kabir deliver didactic statements, the show belies a lack of trust in its audience or an attempt to cover up for its lack of finesse in other departments.

Its moral offerings and preachy statements are naturally cloaked under a narrative excuse. Kabir is shown to be a wannabe documentarian who is using his time as a wedding cameraman to gain inside access — and supposedly pay the bills — with which he can then point out the dualities that exist in Indian society. He is essentially what one would call a “woke artist” in our times. Too bad then his supposed woke-ness doesn't entail any real documentarian skills — or stretch to his clothes. In one episode, Kabir sports a t-shirt of that Pirates of the Caribbean character Jack Sparrow, made famous by Johnny Depp, who has been mired in domestic abuse allegations by ex-wife Amber Heard, allegations Depp has denied.

There are other hiccups across the season. An early (tiny) subplot involving Jazz isn't earned, with the establishing scenes that require viewers to feel for her coming after, rather than before. The first well-done episode of Made in Heaven is the sixth one, “Something Old, Something New” — directed by Prashant Nair (Umrika) — where the threads that are set up in the five previous episodes are dealt with properly, not just with sincerity but executed in a relatable fashion as well. That is asking a lot from viewers.

The second half of the nine-episode season — critics had access to all — is better than the first, but even then, it tends to hit the same story beats at times. Made in Heaven could definitely be shorter, especially what with the frivolous wedding celebrations that turn the show into a music video now and then. It does seem like that the creators were scared that the audience would disappear if it was all heavy and serious all the time.

Made in Heaven also tends to not do justice to supporting characters that it invests time in. That includes a fellow employee of Tara and Karan's, Shibani Bagchi (Natasha Singh, from Yudh), Karan's landlord-neighbour Ramesh Gupta (Vinay Pathak, from Bheja Fry), and a loan shark that Karan is involved with, Jauhari (Vijay Raaz, from Gully Boy). All three characters are given varying amounts of time on-screen, with two of them also getting scenes independent of our main characters, but their arcs feel incomplete and the characters forgotten amidst the bigger picture. 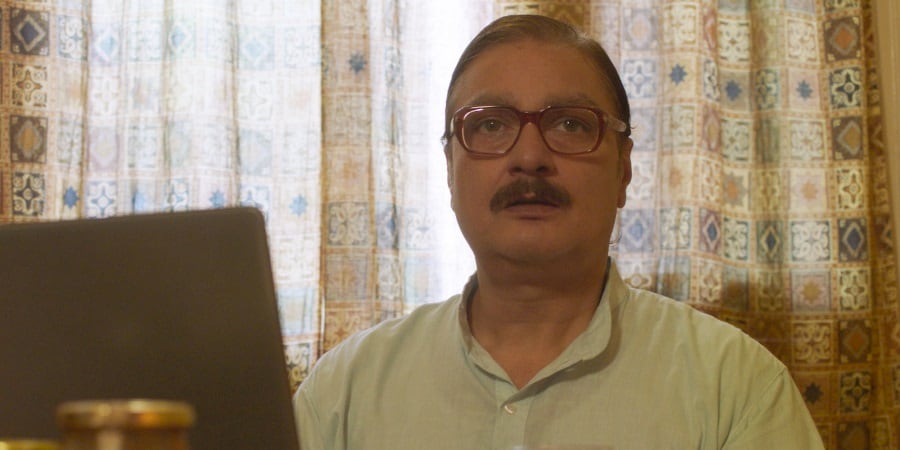 Vinay Pathak in Made in Heaven on Amazon Prime Video

And lastly, the show also makes some technical mistakes. In a couple of scenes, including a sexual adventure of Karan's at his home in the first episode, Made in Heaven forgets the 180-degree rule. Sure, filmmakers have every right to break it to create a sense of disorientation, but there's no such justification for it, in that instance or elsewhere. And in what amounts to a minor complaint, even when Kabir is filming handheld with no aids, there are no shakes or jerks in his shots, as if the camera was on a gimbal or a Steadicam.

Made in Heaven does have a few things going for it. Its exploration of the treatment of and insensitivity towards homosexuals in India — the show was made before the landmark decision reversal by the Supreme Court on Section 377 and LGBTQ rights in India last year, and hence is set in a time before that — covers a lot of necessary ground. And by using various perspectives to showcase the dark underbelly of Indian weddings, it brings several thorny subjects to light such as power and the ensuing privilege, patriarchy and at times, its women enablers, and faux-liberalism and regressive attitudes. But in allowing its central duo to routinely become champions of justice — apart from a couple of ethical missteps — without allowing for failure, Made in Heaven makes things feel too easy.

Worse yet, it doesn't go enough deep enough with its characters. If the show had really committed to their season-long arcs, instead of constantly cutting away to whatever wedding it's throwing in each episode, Made in Heaven would have been able to push further with the parts that matter more. In that sense, in fact, it could do well to learn from Mad Men. The show was about the people in the ad agency, and their ad campaigns rarely ever overshadowed the storylines the characters were on. As it is though, Made in Heaven feels equal parts wedding reality series, big-budgeted music video, and a drama about the lives of wedding planners.

Made in Heaven is out now on Amazon Prime Video worldwide.