Logan Is the Perfect Send-Off for Hugh Jackman's Wolverine

In the last nine years, Marvel Studios has more or less perfected the recipe for superhero success, earning its way past $10 billion (about Rs. 66,705 crores) worldwide last year. Fox, which holds some Marvel licenses, has been at it for much longer – the first X-Men film came out all the way back in 2000 – though its efforts haven’t been commended as universally. Where Marvel’s variation of tone and creators gave it the upper hand, the reception for Fox alternated between praise and disappointment, and it was never quite able to sustain any momentum.

But through it all, Hugh Jackman’s Wolverine has become an icon for the genre itself. Jackman has appeared in almost all of the X-Men adaptations since the beginning, and his success is apparent from the standalone films he has been given. Logan marks the third such entry for the character, and the final appearance for Jackman, as both the studio and he have claimed. It helps that the director James Mangold – who also directed the previous Wolverine film, 2013’s simply titled The Wolverine – understands the gravitas of that event, and imbues the movie with emotional resonance through his writing, too; Mangold worked on the screenplay alongside Minority Report co-writer Scott Frank, and American Gods showrunner Michael Green.

Another important facet for Logan is its R-rating (‘A’ here in India), which Mangold craved and Fox granted, the studio’s decision no doubt influenced by the immense success of its previous R-rated outing, Deadpool. But that is about the only thing the latest Wolverine adventure has in common with its fourth-wall-breaking irreverent cousin. The movie’s penchant for graphic violence and frequent profanity is underscored by the treatment of its subject matter – a grim, unforgiving take on Logan’s life, and the larger X-Men world, in the near future.

Logan is set in the year 2029, at a time when most of the X-Men are gone, and no new mutants have been born for a quarter century. Moreover, Logan’s regenerative powers are wearing off with old age, and his Adamantium implants are slowly poisoning him from the inside. The man has even contemplated killing himself. Don’t make him talk about it though, or he will lash out in anger, as Caliban – a sun-sensitive mutant played by Stephen Merchant – finds out after losing his favourite mug to Logan's anger. Instead, the aging warrior spends his last days on the bottle to minimise the pain that comes with his situation, while working as a limousine chauffeur under his other name – James Howlett – in El Paso, Texas, on the US-Mexico border.

A trailer for James Mangold-directed Logan

Wolverine has always been the reluctant hero, and here too, he’s part of something similar. After an ailing Charles ‘Professor X’ Xavier, now in his 90s – Patrick Stewart returning to the role for what he also said would be the last time – is involved in a ghastly incident, Logan takes him south of the border to an abandoned refinery. He cares for him by purchasing medication off the books, which keeps the old man’s superior brain from going into violent seizures that make his powers run loose. Xavier tells Logan that they can’t hide forever, but the weary metal-clawed superhero has resigned himself to a life not worth living.

Enter Transigen, a mysterious organisation that’s turning young mutants into weapons, and its head of security Donald Pierce (Narcos' Boyd Holbrook). Pierce is tracking one of their subjects – X-23, real name Laura (Dafne Keen) – who has a lot in common with Wolverine, as anyone who’s seen a trailer for Logan will tell you. Logan gets a rude introduction to Pierce, who claims he’s a fan, while making veiled threats to his face. Later, when the responsibility for Laura is thrust upon him, Logan’s world-weariness makes him reluctant to invite the wrath of Transigen upon his frail existence.

In that sense, Logan is similar to its previous chapter, The Wolverine. But where that film eventually dissolved into a generic action piece in its closing act, Mangold has seemingly learnt the lessons of those mistakes. Even though the film is essentially a vehicle for a life on the lam – Logan, Xavier, and Laura are forced on the run, with Pierce and his team of cybenetically-enhanced humans chasing the trio through the American mid-west – what keeps from the action from feeling routine is the variety the director brings to it, time after time.

By its narrative techniques, Logan can easily be termed as a Western, the kind where a broken-down hero, pushed to the edge by years of pain, takes on one last mission. And Mangold doesn't shy away from acknowledging its influences, even straight-up presenting them in one scene, as Xavier and Laura are shown watching clips from George Stevens’ iconic 1953 film Shane, which follows an aging gunfighter with a mysterious past, whose efforts to have a proper family are ultimately in vain. In interviews, he’s mentioned other movies too, from Clint Eastwood’s The Gauntlet, to Darren Aronofsky’s The Wrestler. The story is also inspired by the Old Man Logan comic arc, penned by Mark Millar, but those inspirations are merely on the surface. 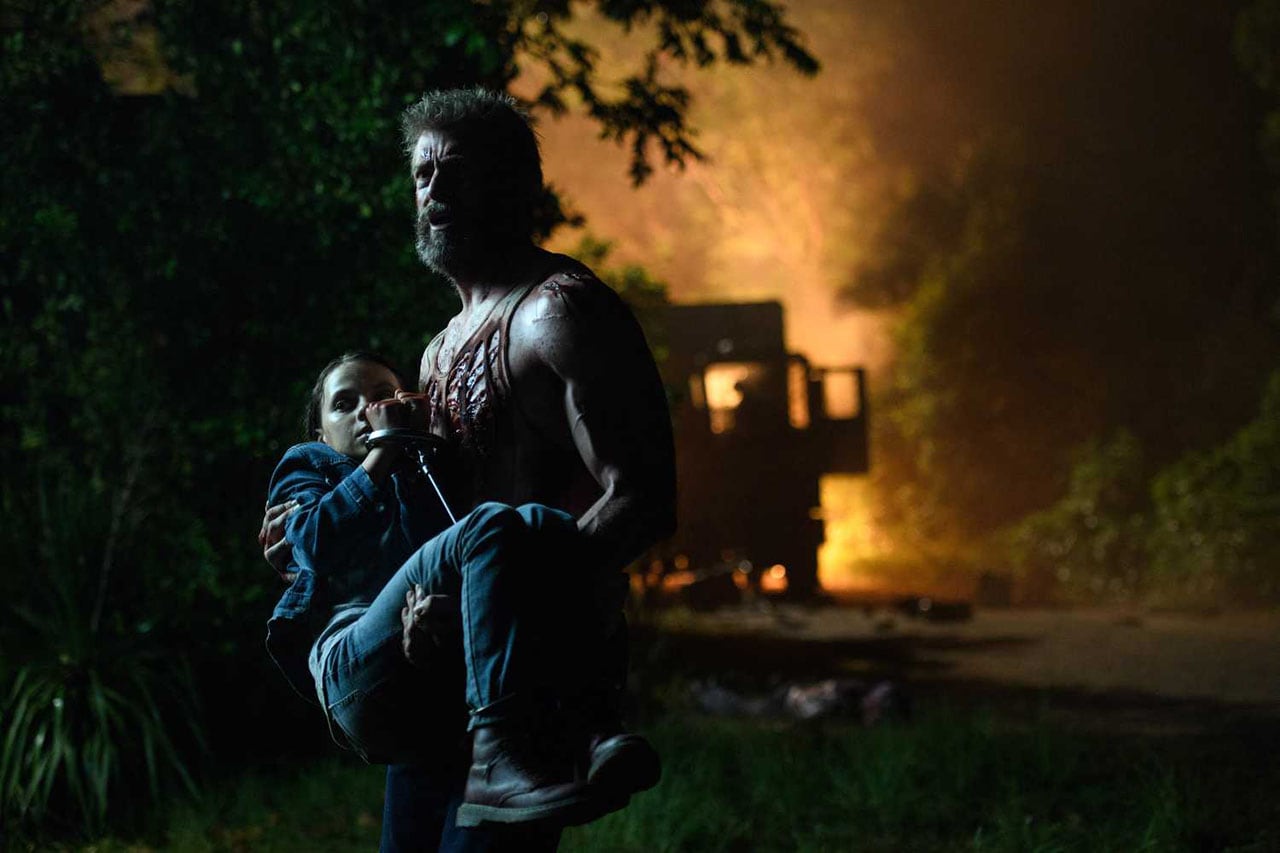 Dafne Keen as Laura, and Hugh Jackman as Logan in a still from Logan
Photo Credit: Ben Rothstein/20th Century Fox

What truly anchors the film is the symbiotic yet crestfallen relationship between Logan and Xavier. Even as the former resents the latter’s disintegrating mind and rabid barks, and they vehemently disagree over the right path to most things, there is still affection and mutual respect between the two. And thanks to Jackman and Stewart’s effective portrayal of their characters, Logan delivers its message – of family, trust, pain, decay, and responsibility – in a piercing fashion. Logan might have resigned himself to never being a hero again, but he’s still highly protective of the one thing that’s left. Xavier, on the other hand, has gone from being the leader of the X-Men to an old man who needs help even getting into the toilet.

Laura’s youth and energy may bring a distinctly different third frontier to this triangle, but her rage and loathing at how she’s been treated channels itself in a wordless frenzied ferocity, as she fights and hopes for a better future elsewhere. It’s a testament to the 11-year-old Keen – making her feature film debut – who carries herself wonderfully alongside two great actors of our time, and plays a crucial part in earning the movie’s big emotional moments.

In that, Logan is full of trauma from all sides, and the film never relents on its dark, and solemn approach. At the same time, Mangold is smart enough to understand how not to fall into the pitfalls of an all-too-serious film, which can easily get dragged down by its cynicism and world-weariness, as evinced by the multiple Warner Bros-DC superhero stories. Hence, very much unlike them, Logan doesn't forget to breathe. The writer-director, along with Frank and Green, know when to insert pauses into their film, to allow the audiences to reflect on what they have witnessed, and connect with the characters on a deeper level.

The film does end up wallowing a bit longer than it needs to – at 2 hours, and 17 minutes, it could have been tighter – but its deliberate pace helps set a mood of its own elsewhere, setting itself apart from any other superhero movie that has landed in cinemas this century. That extends to both Jackman and his character, who finds a beacon of light amidst his near-endless misery – in his connection to Laura – and simultaneously subverts the standards set for superhero tales. It keeps itself away from another ‘saving the world’ trope, and crafts a uniquely personal and tragic story that will leave many choked up.

The Australian actor wasn’t first choice for playing Wolverine in Bryan Singer’s X-Men (2000), but as he rides into the sunset, it’ll be a struggle for anyone who lived through this period to imagine someone else in the role. Logan’s excellence in being the perfect send-off for Hugh Jackman’s Wolverine will make it harder still.

Further reading: Logan, Wolverine, Hugh Jackman, Fox, X Men
Akhil Arora Email Akhil
Akhil Arora covers entertainment for Gadgets 360, interviewing stars such as Christian Bale and Anurag Kashyap, covering series premieres, product and service launches across the globe, and looking at American blockbusters and Indian dramas from a global socio-political and feminist perspective. As a Rotten Tomatoes-certified film critic, Akhil has reviewed over 150 movies and TV shows in over half a decade at Gadgets 360. When he is not completely caught up with new film and TV releases, Akhil ...More
Apple Has 1,000 Engineers Working on AR for the iPhone 8: Report
NASA Shares Key Software With the Public

product James Mangold returns to the X-Men universe in this mature, grim take on the metal-clawed superhero, as Logan must care for an ailing Professor X, and a young mutant.

Logan Is the Perfect Send-Off for Hugh Jackman's Wolverine
Comment