Even Timon and Pumbaa can’t save this one.

Simba, Pumbaa, and Timon belt out “Hakuna Matata” in The Lion King

If you haven't seen the original, you'll be able to easily appreciate the remake's photorealistic visuals, which borrow and build on the tech that Disney and Favreau used on 2016's Jungle Book remake so spectacularly. Every animal, bird, and blade of grass in the new Lion King is exquisitely rendered. (It's not a “live-action” remake, as many are calling it, but a computer-animated film that's made to look as real as possible.) When the characters aren't talking or singing, you could easily mistake the film for a brilliantly-framed nature documentary, à la BBC's Planet Earth.

For those that have seen the original, the new Lion King — arriving just over two and a half decades on — is like a visually-enhanced hit of nostalgia, with a who's who of A-list actors taking over the voice roles for the characters you fondly remember and the songs that have been etched into popular culture, including the famous “Hakuna Matata”. (Donald Glover and Beyoncé are a couple of the new additions, with James Earl Jones as Mufasa the lone carry-over. If Hindi is your fancy, you'll be treated to Shah Rukh Khan and his son.) The remake then offers an opportunity to revisit those memories and rekindle them on a grander scale, potentially in IMAX.

But the push for realism has its shortcomings. By limiting itself to how animals look, feel, and behave in the real world, the new Lion King has to eschew the stylistic exaggerations allowed of traditional animation. (That's a problem it partly shares with the live-action Aladdin remake, released back in May.) As a result, some of the most imaginative and best-looking frames of the original are virtually discarded on the remake, which in turn opts for a more natural feel. Therefore, those who haven't seen the original will enjoy the remake more, as they'll have nothing to compare it with.

And in its commitment to realism, the new Lion King also spoils the majesty of its villain Scar, discarding his regal look in favour of a dishevelled, impoverished frame. Moreover, the photorealistic approach also gets in the way of the expressions that can register on the faces of characters. It's unclear how much motion capture was used, but if Favreau's prior statements regarding The Jungle Book are any indication, then he likely minimised it. The lack of anthropomorphisation hurts The Lion King as a result, as the mouths of the animals and birds barely open, their faces barely twitch, and there is barely any emotion.

That disconnect and imbalance results in The Lion King remake coming across an impostor, as it features a star-studded voice cast and can invoke the iconic soundtrack but doesn't possess the artistry and the heart of the original. It's a bit like Fantastic Beasts is to Harry Potter. And just like that on-going spin-off franchise, this is a Lion King movie for no one essentially, because what it does offer is pretty much cancelled out by what it doesn't. It has no reason to exist.

Like most of Disney's previous live-action / CGI hybrid remakes, The Lion King retains all the big plot points from the original. We open with the sun rising over an African savannah, as a young lion cub is presented on top of Pride Rock to a gathered audience below. His name is Simba (JD McCrary when young, Glover as an adult) and he is the future King of the Pridelands, a kingdom currently looked after by his father Mufasa and his mother Sarabi (Alfre Woodard). Simba is extremely eager to prove himself has to rescued by his father after he ventures into the forbidden lands with his best friend Nala (Shahadi Wright Joseph when young, Beyoncé as an adult). 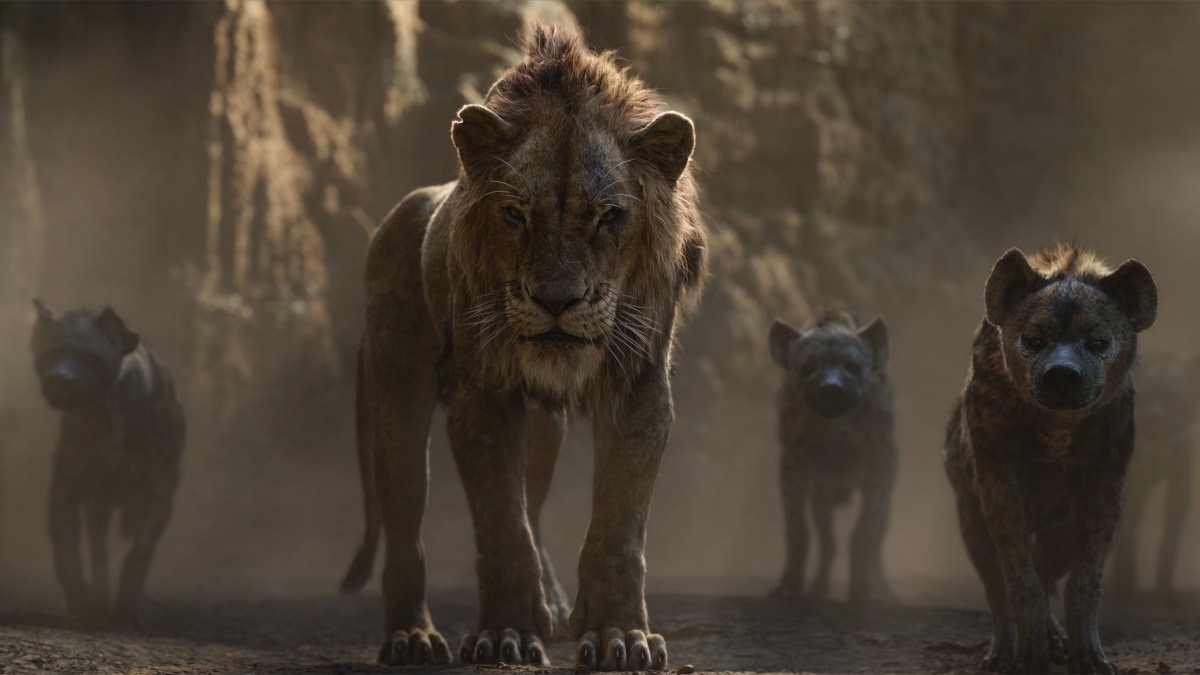 Scar and the hyenas do evil stuff in The Lion King
Photo Credit: Disney

Meanwhile, Mufasa's younger brother Scar (Chiwetel Ejiofor), who the film suggests had challenged his elder sibling for leadership and made a play for Sarabi in their days of youth, is plotting to take over. Scar makes a deal with the pack of hyenas that inhabit the forbidden lands, and together, they put a plan into motion that ends with the death of Mufasa. (Spoilers for a 25-year-old movie, sorry.) Scar convinces Simba that the young cub is to blame for his father's death, who then runs away from the Pridelands and off into the desert. There, he's found by the pair of wise-cracking meerkat Timon (Billy Eichner) and the dim-witted warthog Pumbaa (Seth Rogen), with whom Simba grows up in their lush, jungle home.

As you can tell, the new Lion King doesn't shake the cauldron in any significant manner. It's nearly a shot-for-shot remake at times. There's a bit more backstory for some of the lions, and a couple of new songs: “Spirit” for Nala, likely because they've hired Beyoncé, and “Never Too Late”, which brings back Elton John, who composed much of the original music. Neither are anything special, though “Spirit” is a slight improvement on the new song given to Jasmine on the Aladdin remake. But these films, in not even attempting to update themselves for the times, ensure the female characters have a limited role and in turn, the films simply become more outdated and irrelevant even before they are out.

For what it's worth, The Lion King has updated itself for the times with the inclusion of more African actors and others with African ancestry. The likes of Ejiofor, Kani, and Jones (as always) are wonderful in their respective roles, bringing a sense of much-needed gravitas. Meanwhile, other voice actors in Rogen, Eichner, and John Oliver as Zazu make a great impression as well. The former two deliver on the chemistry that's required of Timon-Pumbaa, and lift the film after a serviceable first act that merely fulfils its narrative purpose. They also provide the only bits of self-awareness in the new Lion King, which otherwise feels like it's worshipping the original considering how closely it hews. 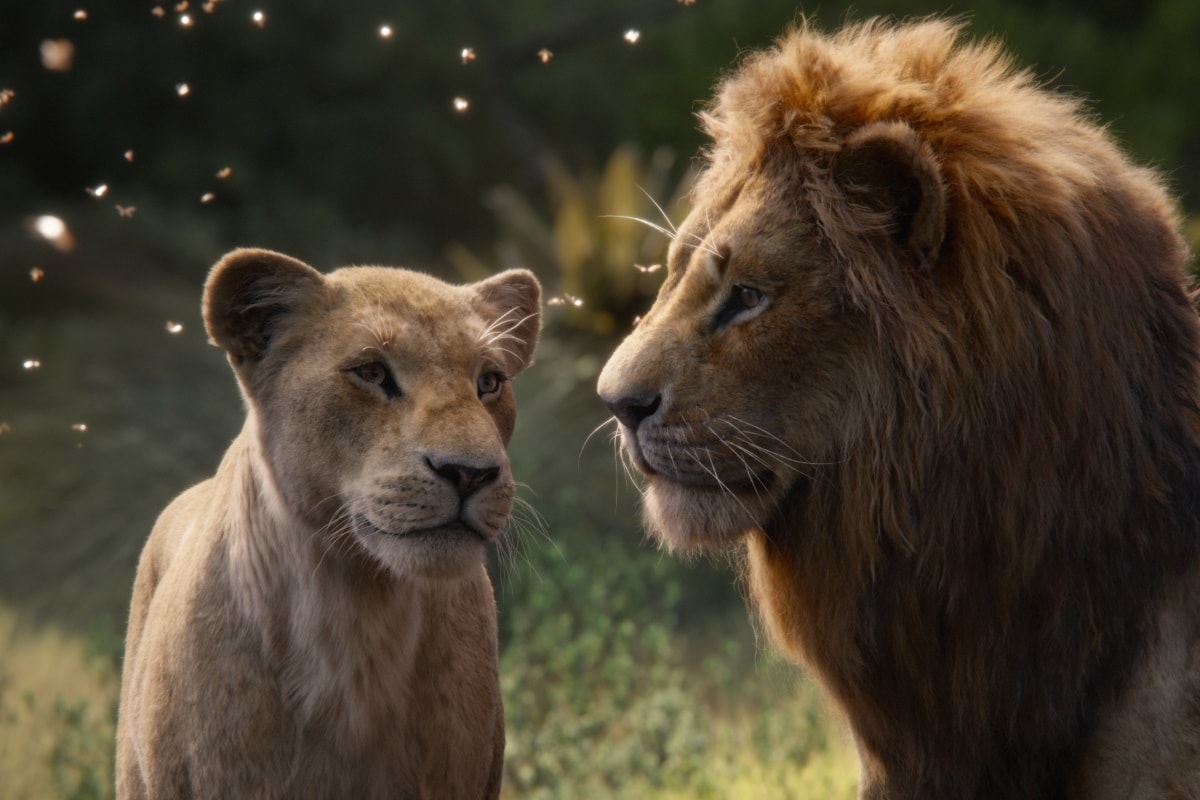 Nala and Simba try to Feel the Love “Today” in The Lion King
Photo Credit: Disney

The pair, and Zazu, do lose out on a couple of songs that are axed from the original, in “Hawaiian War Chant” and “The Morning Report”. They are rare signs of creative license on the Lion King remake, which could have used a lot more of it. Speaking of the songs though, even the ones that are retained aren't very special — not because of the singing, but the visuals. Disney has been smart enough to hire singer-actors in Glover and Beyoncé, who deliver as you'd expect them to, but the overall performances are muted for they lack the freedom that traditional animation provides. Even their duet “Can You Feel the Love Tonight” is surprisingly flat on-screen, which is also weirdly performed in broad daylight.

Ultimately, the new Lion King doesn't have the charm and connect that endeared the original to everyone, save for a middle section featuring Timon and Pumbaa. If Disney is really insistent on bringing all its animated tales into the modern era, it ought to take a stronger look at updating their stories and finding someone with a creative vision, than simply giving them the splashy big-budget photorealistic makeover. (The remake is estimated to cost $250 million, about Rs. 1,700 crores.) That said, if it makes anywhere near as much money as it's expected to make — the original made nearly a billion dollars (about Rs. 6,800 crores), after all — it should give the studio exactly what it's in for with these “live-action” remakes of its beloved properties.

But if Disney could bother to make the lions look so real, the least they could have done is take inspiration from the real animal world, where female lions are the ones who run the pride.

The Lion King releases July 19 in India in English, Hindi, Tamil, and Telugu.

product The new Lion King movie is a — photorealistic, computer-animated not live-action — remake of the 1994 animated original, featuring the voice talents of Donald Glover, Beyoncé, and James Earl Jones among others. Directed by Jon Favreau, The Lion King is out July 19 in India.

The Lion King Review: A Visual Upgrade, Devoid of the Disney Magic
Comment