The Lego Movie 2: The Second Part Is an Enjoyable Ode to Sibling Rivalry and Love

Five years ago, the original Lego Movie — before the terrific Lego Batman and the underwhelming Lego Ninjago spin-offs followed in 2017 — delivered a masterclass in corporate synergy and big screen entertainment. What was essentially conceptualised as a feature-length advertisement for children's toys manufactured by the eponymous Danish brand, ended up being much more than that, thanks to the brilliance of writing-directing duo Phil Lord and Christopher Miller. The inevitable sequel — The Lego Movie 2, with that clunky redundant subtitle ‘The Second Part', out Friday in theatres — has the unenviable task of topping that, without being able to rely on the clever trump-card late-game twist used in the original, of the entire story existing in the imagination of an actual human kid, Finn (Jadon Sand), playing with Legos.

Devoid of that surprise, The Lego Movie 2: The Second Part — directed by Mike Mitchell (Trolls), off a script by Lord and Miller — doubles down on those live-action real-world metaphors, as it picks up where the first chapter left off. Having been invited by their father (Will Ferrell), Finn's younger sister Bianca (Brooklynn Prince, from The Florida Project) has started to regularly “invade” the basement where Finn constructs his elaborate Lego worlds, grabbing anything that is adorable, sweet or pleases her. To put an end to it, the colourful and shiny world of Bricksburg has given way over five years to Apocalypseburg, a desolate wasteland that's extremely reminiscent of Mad Max: Fury Road. The characters within have taken a grim turn too, except the always-affable Emmet (Chris Pratt), who deludes himself by listening to remix versions of “Everything Is Awesome”.

Emmet's inability to clamp down his cheery side attracts the interest of an intergalactic alien called General Sweet Mayhem (Stephanie Beatriz, from Brooklyn Nine-Nine), who captures all his friends — Lucy (Elizabeth Banks), Batman (Will Arnett), Princess Unikitty (Alison Brie), Benny (Charlie Day), and MetalBeard (Nick Offerman) — and transports them to the Systar System (get it?). Ever the good friend, Emmet sets off on a rescue mission and needs saving himself by Rex Dangervest (Pratt), “a galaxy-defending archaeologist, cowboy, and Raptor trainer” who's meant to be a spoof of Pratt's characters from Guardians of the Galaxy and Jurassic World among others, all tough-guy roles he has played in the five years between the two Lego movies, having gone from affable Parks and Rec guy himself to big-time Hollywood action star.

In doing so, The Lego Movie 2 charts along three different narrative tracks and allegories. The first obvious one is the world asking Emmet to grow up, which runs parallel to the demands made of its target audience, which has itself grown tremendously in the five-year gap between the two films. On a second level, the sequel explores what all siblings have dealt with in their lives at some point, including squabbling over the pettiest stuff and eventually making up. The Lego Movie 2 also critiques the pop culture scenario and model on a third stage, which tends to produce cardboard characters that pump out the same old men-without-emotion tropes. And Bianca's age and completely different views on what to do with the Lego becomes a marketing vehicle to show off new toys such as Lego Duplo, that waste no time announcing themselves as such when they crash the party in the beginning. 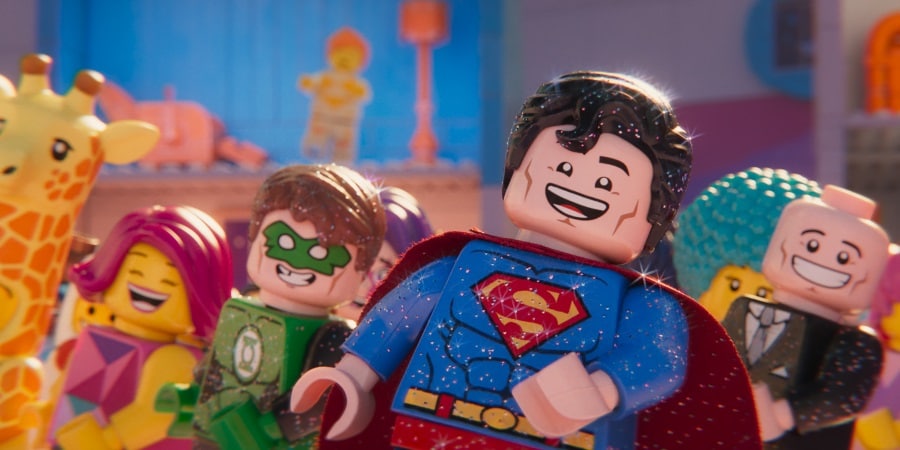 Set aside the commercial ploy that has been true for this exercise since the start, the other parts of The Lego Movie 2 fit fairly well, as construction blocks of different shapes and sizes possibly can. The sequel's expansion on the metaphorical front benefits the depth of and humour in the story; the latter is both relatable and heartfelt, more so for those that grew up with a sibling of their own, while the former translates a relatively small real-world consequence into an existential problem for the Lego beings. If the siblings fight too much, it will trigger an “Armameggedon” in Apocalypseburg and Systar System, a portmanteau of Armageddon and “Ar-mam” i.e. our mom (Maya Rudolph, from Bridesmaids), who has threatened the kids with shelving all Lego pieces into storage bins. The plot is a bit wobbly and convoluted at times, but it gets the job done.

The Lego Movie 2 is smart enough to focus on that sibling rivalry and not let the mother come across as the villain, in what would otherwise feel like a rehash of the first film. In a fourth wall-breaking telling joke, Rudolph's character says: “I'm not the bad guy in this story, I'm just an amusing side character.” That wittiness and self-awareness extends to the aforementioned earworm song from the original, “Everything Is Awesome”, which — in addition to receiving a more-mature grown-up companion in “Everything's Not Awesome” — becomes the basis for an intentionally “Catchy Song”, playing on the fact how (unintentionally?) catchy “Everything Is Awesome” was. The new song's primary lyric, “This song is gonna get stuck inside your head”, is as deliberate as anything can be, and it's grafted onto the plot in a jokey fashion as well. 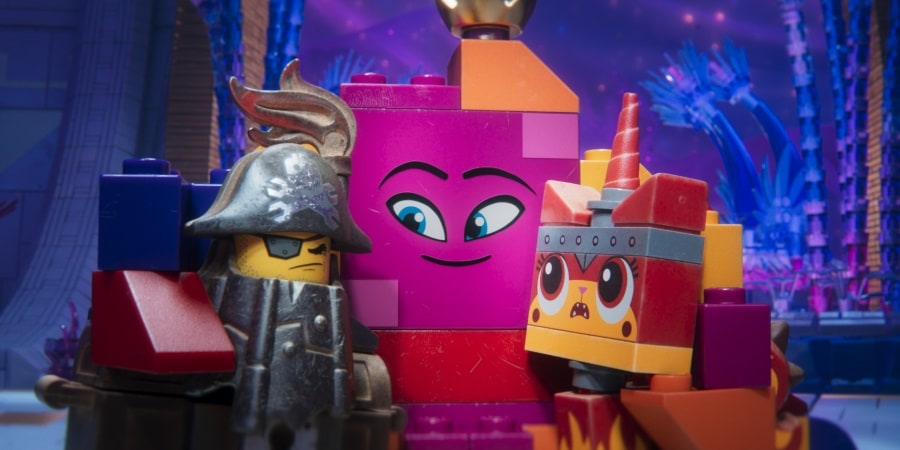 Where the “Catchy Song” showcases the sequel's knowing smarts, another new song — “Not Evil” — that serves as an introduction for the shape-shifting alien ruler of the Systar System, Queen Watevra Wa-Nabi (Tiffany Haddish, from Girls Trip), riffs on existing pop culture, which in this case are the several musical tunes written over the years for Disney animated villains. Her first appearance in The Lego Movie 2 is one in a long line of fun sight gags, which turns the blonde-princess trope on its head. While some gags such as Gandalf's (Todd Hansen) iconic line from Lord of the Rings are in your face, others such as the Wizard of Oz quartet might need a second viewing for some. Alongside, there are obvious, extended references to Mad Max: Fury Road and the Lego Batman spin-off, and jabs at the endless nature of superhero movies in Hollywood and lazy filmmaking conventions such as a convenient plot device.

Apart from the jokey songs, sight gags, endless references and eccentricities of its characters, The Lego Movie 2 also derives humour from the blown-up consequences and impact, or rather lack of, of the Lego-world happenings on the real-world — and vice versa. It's similar to what audiences have seen before with 2015's Ant-Man, and its 2018 sequel Ant-Man and the Wasp, but it's still entertaining if not as refreshing as the original's offerings. Not all of this is targeted at the children in the audience. At The Lego Movie 2's Indian premiere, we felt that that the film generated split laughs from different sections of the audience, depending on the joke.

Ultimately though, the lessons and themes of The Lego Movie 2 hold more meaning and are more resonant for the younger ones, who have no doubt faced similar pressures as Emmet. The film notes that it's just as important not to lose what it means to be yourself as you figure out how to grow and adapt to the times. At the same time, it's also an ode to sibling rivalry and affection, which stems from wanting to spend time and bond with each other. And from a filmmaking perspective, The Lego Movie 2's greatest strength is how it makes such a studio vehicle feel like an indie project, true to the roots of the homemade Lego movies that started it all. The creative credits, which have no ulterior motive involving a post-credits scene, are a great example of that spirit and energy that is reflective of the film series.

The Lego Movie 2: The Second Part is released Friday, February 8 in India and across the world.

Further reading: The Lego Movie, The Lego Movie 2: The Second Part, Lego, Warner Bros, Chris Pratt
Akhil Arora Email Akhil Akhil Arora covers entertainment for Gadgets 360, interviewing stars such as Christian Bale and Anurag Kashyap, covering series premieres, product and service launches across the globe, and looking at American blockbusters and Indian dramas from a global socio-political and feminist perspective. As a Rotten Tomatoes-certified film critic, Akhil has reviewed over 150 movies and TV shows in over half a decade at Gadgets 360. When he is not completely caught up with new film and TV releases, Akhil ...More
Vivo V15 Pro, V15 Smartphones to Further Consolidate Position in India: Vivo
Facebook's Data Gathering Hit by German Anti-Trust Clampdown

product In The Lego Movie 2: The Second Part, Chris Pratt and Elizabeth Banks return as Lego figures in this sequel to the original Lego Movie, who are facing a new threat posed by Lego Duplo invaders. The Lego Movie 2 releases on February 8 in India.

The Lego Movie 2: The Second Part Is an Enjoyable Ode to Sibling Rivalry and Love
Comment