If there’s one word that perfectly encapsulates The Lego Batman Movie, it’s relentless. From the copious amounts of fun and satire it brings to the animated brick-world of Gotham, to the unceasing egomaniac personality of its crime-fighting vigilante – gravelly voiced by a wholly-enjoyable Will Arnett, reprising his cameo appearance from 2014’s The Lego Movie – the film is packed to the rafters, mostly in a good way. A lot of its blend of humour is directed at the Caped Crusader himself, and in its attempt to be eternally self-aware and skewer everything in its sight, The Lego Batman Movie doesn't spare anything – with Batman even narrating over the studio logos before the first frame comes into view.

That quality extends throughout the 90-minute adventure, which moves at such a frenetic pace that it barely affords any time for its audience to unpack the many layers of its previous comments before landing a barrage of successive ones, on and on. The biggest proof of both those qualities - self-awareness, and the pacing - come in the film’s opening minute. Arnett's Batman takes swipes at the art of film-making itself, giving us a play-by-play of what all “important movies” do – they all open with a black screen, follow it up with a rising soundtrack, and present a wall of text for viewers to read, which Lego Batman ends up narrating anyhow. Why? Because he can, and because this is his film.

Batman's portrayal as a fully conceited, uncaring individual is given the full burn in the sequence that kick-starts this comedic romp from director Chris McKay – who served as animation co-director on The Lego Movie – and his team of five screenwriters. For the world’s greatest detective, getting dirty with Gotham’s elite squad of villains – or human farts, as a disappointed Joker (Zach Galifianakis) calls them later – is like going through the motions. He lives off the rock star treatment he gets from the citizens of Gotham, but he has severe disdain for quite literally everyone, which involves a full-of-himself approach towards defeating the villains. Having lost his parents at a young age, Master Wayne has built himself into a supremely-guarded adult – he lives on an island figuratively, and literally – who refuses to let anyone into his life. It’s gotten to the point where he’s oblivious of the true role and impact of his butler Alfred Pennyworth (Ralph Fiennes). Confronted with the prospect of having to care for an orphan he inadvertently adopted, Batman questions Alfred on how he could possibly know what having a surrogate son – Michael Cera bringing a fantastic sense of comedic timing to a young Dick Grayson, and later Robin – feels like.

His contempt for emotions extends towards his hostility with Joker, who wants Batman to acknowledge that they are the greatest of foes, and have something special – he might be a villainous fella, but he’s secretly sensitive. It’s also one in a series of homoerotic comments between the two. But Batman is adamant to not concede even an inch. He doesn’t "do ‘ships, as in relationships", he tells the Joker. And when he follows it up by saying there’s no “us”, the Joker’s eyes swell up. It’s one of the most hilarious, delicately sweet, yet deep understanding of the complex dynamic between the two, and it’s outright fascinating to witness that in an animated film where everyone’s a Lego.

That aspect is one of the overall great things about The Lego Batman Movie. McKay and his genius team of writers have inculcated a steady stream of jokes on a variety of levels; so, while there are plenty of asides (with a handy sprinkle of butt jokes) and elbow-jabs that will keep the younger viewers pleased, the grown-ups can rest assured that the film’s satire is wide-ranging – going all the way from last year’s Zack Snyder trash, to the 60s Adam West days – and nuanced enough to earn those knowing laughs, be it a critique of our superhero culture, or the way the animation genre cheats to ride into our hearts.

In the latter sense, it’s sometimes a bit too clever for its own good. When Robin points out how animated characters are given bigger eyes in proportion to their faces, the very same thing is already being done with the character. Even if it works on one level as a method of self-awareness, on another level, it feels like a way of having the cake and eating it too, all to its own glee. Its problems extend into the handling of Batman as a central figure. 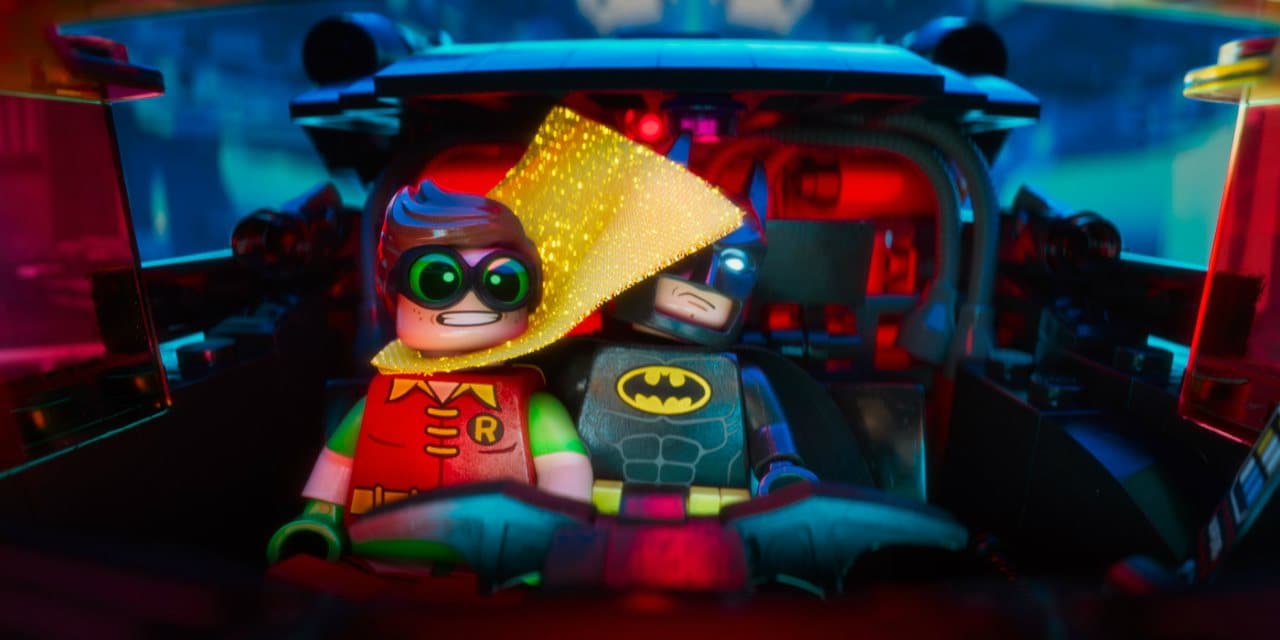 At one point in the opening minutes, Batman commands his Batcomputer to "overcompensate", which allows his Batmobile to stage a grand entrance for itself, and give its owner the upper hand in a dicey situation. At its self-indulgent worst, Lego Batman can feel very much like that, in that it's overcompensating for its weak links – namely a straightforward plot, and the lack of character development beyond its titular star, who loves the spotlight anyway. In doing so, it falls into the trap of not learning from its own protagonist's shortcomings. Because Batman is so much of a bigger draw for the film, it affords him much more importance than everyone else around him.

Thanks to Arnett’s charm as a forever-right Batman who’s always this side of annoying, wall-to-wall action, and the ability to ridicule itself the most – something must be said of how the execs at Warner Bros. willingly take on the self-mockery, of its dozen or so properties with free reign – the spin-off Lego adventure has achieved the seemingly unthinkable.

Three years ago, before the toy company’s characters first came to life on the big screen, it seemed like the ultimate cash-grab for Hollywood, and Lego. But The Lego Movie proved to be a clever insight into our consumerist culture, in which everyone happily functions, nobody questions, and “everything is awesome”. The Lego Batman Movie is nowhere near as inventive, but it largely does more of the same for skewering our current superhero culture – a dark, cynical mess that’s too busy with morality and inner struggles to see the joys of life.

Move over, Batfleck – this is the Batman all fans deserve. Even if it’s ultimately made to benefit the merchandising line of Batman and Lego, it’s all excusable for the sheer, exhilarating ride it offers.

Further reading: Lego, Batman, The Lego Batman Movie, Warner Bros, DC Comics
Akhil Arora Email Akhil
Akhil Arora covers entertainment for Gadgets 360, interviewing stars such as Christian Bale and Anurag Kashyap, covering series premieres, product and service launches across the globe, and looking at American blockbusters and Indian dramas from a global socio-political and feminist perspective. As a Rotten Tomatoes-certified film critic, Akhil has reviewed over 150 movies and TV shows in over half a decade at Gadgets 360. When he is not completely caught up with new film and TV releases, Akhil ...More
PS3, PS Vita, Sony Bravia, and Samsung TVs to Lose PlayStation Now Support
Cognitive Computing Is India’s Future, Says IBM President

product In the first spin-off Lego adventure, Will Arnett's Batman is the hero we needed, after the calamity of recent outings.