Klaus Review: Netflix’s First Animated Movie Has Its Heart in the Right Place

An origin tale of Santa Claus.

As Netflix has gotten bigger, it has — somewhat naturally — made bigger bets. It forked over upwards of $300 million (about Rs. 2,150 crores) to produce Martin Scorsese and Michael Bay's latest movies, the mob drama The Irishman, starring Robert De Niro and Al Pacino, and the action thriller 6 Underground, led by Ryan Reynolds. And it's said to be spending $200 million (about Rs. 1,434 crores) on Red Notice alone, an action flick that stars Dwayne “The Rock” Johnson, Gal Gadot, and Reynolds. But these bets are risky too. All these films are not based on existing intellectual properties, which is scary for traditional Hollywood studios reliant on theatrical earnings. And as part of taking on projects that others in Hollywood refused to bet on, Netflix has gotten its first animated feature: Klaus.

For one, Klaus has been made in the old ways of traditional hand-drawn 2D animation, which fell out of favour in the early 2000s as computer animation took over. But thanks to animator and debutante director Sergio Pablos — best known as the creator of Despicable Me — who makes use of modern touches such as volumetric lighting, Klaus can easily be mistaken for computer animation, something Pablos knows too well. That means most viewers will overlook the painstaking work that went into it, which doesn't get much traction anyway in a world now run by Pixar and DreamWorks. Rather interestingly, Pablos said the sticking point for Hollywood studios wasn't Klaus' animation style, but the focus of its story: Christmas.

As you have likely surmised from the film's title already, Klaus involves the legendary figure of Santa Claus. In fact, this is supposed to be an origin story. Every part of the Santa Claus mythos is given a backstory in Klaus, from how children came to write letters to Santa and why the presents go through the chimney, from how reindeer came to pull his sleigh and why they are imagined with the ability of flight, to how Santa got his red-and-white attire and how those who help him make toys came to be. Some of the “answers” are delightful executions of physical comedy, while others reaffirm the Netflix film's inherent belief in the power of kindness. Or as its characters say: “A true act of goodwill always sparks another.”

Klaus begins by introducing us to a spoiled young man named Jesper Johanssen (voiced by Jason Schwartzman), who's lazing away his life at the Royal Postal Academy, run by his dad the Postmaster General (Sam McMurray). But he's in for a rude awakening. With his father wanting to make a man out of his son, Jesper is dispatched to the frigid, remote island of Smeerensburg, somewhere above the Arctic Circle. There, he must set up a postal office and stamp 6,000 letters in the first year if he doesn't want to be cut off from the family fortune he's been living off. It's clear that Jesper has never had to work a day in his life, and making matters worse, he has no clue that Smeerensburg is an exceptionally harsh posting.

You see, there exists a generations-old feud between the isle's two factions, the Krum and the Ellingboe, led by a matriarch (Joan Cusack) and a patriarch (Will Sasso), respectively. That means the kids don't go to school, where the only teacher Alva (Rashida Jones) has turned into a fishmonger to make enough money to leave. And for Jesper, that means the townsfolk have no interest in sending letters to one another, given half of them despise the other half. The newly-minted mailman comes close to giving up until he accidentally leaves a child's drawing at the doorstep of a well-built, white-bearded woodsman named Klaus (J.K. Simmons), who has a huge collection of hand-crafted toys. Klaus recruits Jesper to help him deliver a toy to said kid, and Jesper realises there's a business in getting toys to kids.

Pablos proves himself to be quite adept as a first-time director, as he brings in elements from other genres to punch up what is a family comedy at the heart of it. The introduction to the horrid town of Smeerensburg feels like it's been lifted off a horror or Western movie, with the monochrome visage of its cityscape, the looming dread of its seeming emptiness, or the psychopathic tendencies of its young inhabitants. In a later montage, Klaus presents Jesper as a drug pusher, a visual motif clearly meant for the adults among the viewers. There's plenty of comedy for the Netflix film's target audience (kids) as well, with a collection of sight gags and slapstick humour, which is offset by sarcastic quips and self-aware, darkly comedic lines of dialogue elsewhere. 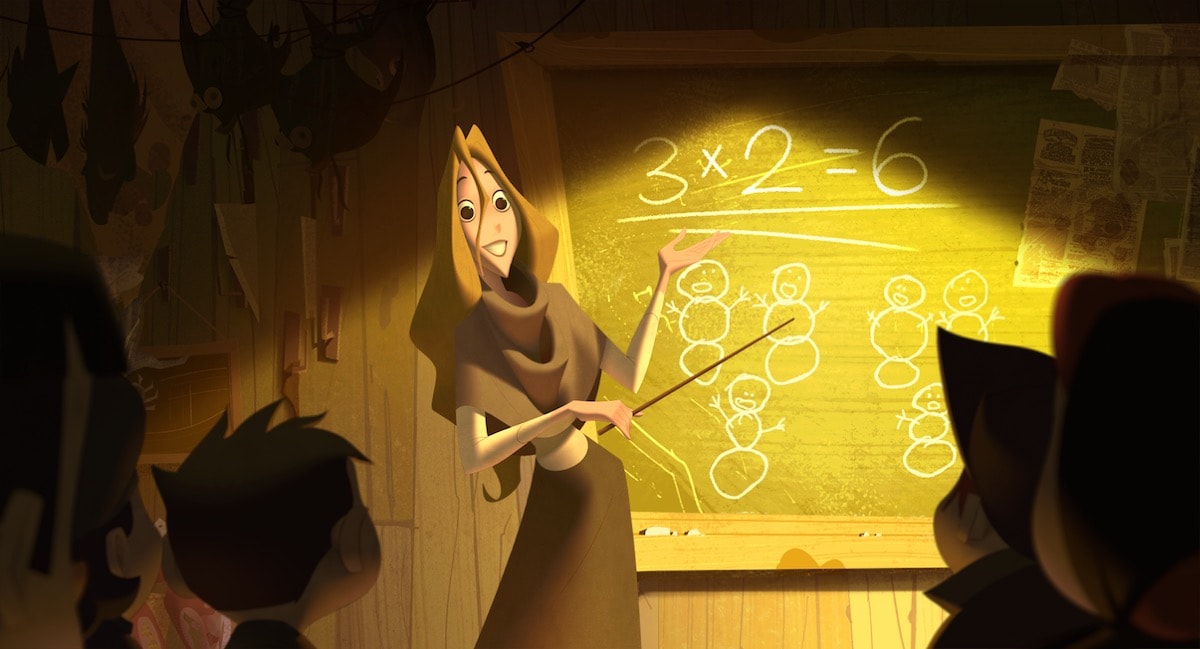 But the writing — from newcomers Jim Mahoney, Zach Lewis, and Pablos — is weaker in terms of characters and story. Alva is largely present in Klaus to tell Jesper what a good job he's done and then end up as his love interest, even though the film bothers to present no evidence of their connection whatsoever. And in likely not wanting to upset anyone, Klaus ends up keeping things simple and reaffirms the existing legend of Santa Claus. It does have one interesting thing to say about Christmas. Klaus subverts the message that gift-giving began as a wholly altruistic exercise, by noting that most humans only ever do things out of self-interest. It's funny that something as wholesome as Santa Claus could be borne out of that.

But Klaus also shows that children's acts, even when driven by greed, can set an example for adults. For the obliviousness that stems through their innocence overlooks grudges and in turn, undoes the mistakes of the past. Or in other words: “A true act of goodwill always sparks another.”

Klaus is out now on Netflix worldwide. A Hindi-language dub is available as well.

Further reading: Klaus, Netflix, Netflix animation, Netflix Kids
Akhil Arora Email Akhil Akhil Arora covers entertainment for Gadgets 360, interviewing stars such as Christian Bale and Anurag Kashyap, covering series premieres, product and service launches across the globe, and looking at American blockbusters and Indian dramas from a global socio-political and feminist perspective. As a Rotten Tomatoes-certified film critic, Akhil has reviewed over 150 movies and TV shows in over half a decade at Gadgets 360. When he is not completely caught up with new film and TV releases, Akhil ...More
Tata Communications Joins Microsoft in Connected Car Space
Apple Launches App to Let Users Enroll in Health Studies

product In Klaus, Netflix’s first animated movie, “a selfish postman and a reclusive toymaker form an unlikely friendship, delivering joy to a cold, dark town that desperately needs it.”