Despite being massively underwhelming, Jurassic World went on to garner over $1.6 billion worldwide upon its release in 2015, and still ranks in the top five films of all-time when it comes to the global box office. A big reason for its success was the fact that audiences hadn't seen a big-budgeted dinosaur movie for a while. Its sequel and the fifth entry in the franchise started by Steven Spielberg – Jurassic World: Fallen Kingdom, out this week in some parts of the world including India – doesn't have that advantage, and must attract audiences on its own worth.

Unlike the first, which was decidedly a children's film in many ways, the follow-up makes it clear from the get-go that it wants to deliver a more satisfying story for the grown-ups. Written by Jurassic World director Colin Trevorrow and his writing partner Derek Connolly, and directed by J.A. Bayona – best known for his 2007 horror film The Orphanage and the 2012 tsunami disaster drama The Impossible – Fallen Kingdom takes itself quite seriously, and tries to have a solemn touch with several scientific, political, and social themes.

There's a grittier and darker edge to the way it's shot and how the story is handled, right from the beginning. For those that followed the film's production, this isn't surprising. Trevorrow wrote the film with Bayona in mind, and that's why the second half of Fallen Kingdom does feel like The Orphanage meets dinosaurs. The Spanish director has also compared his film to Star Wars: Episode V – The Empire Strikes Back and Star Trek II: The Wrath of Khan in how both sequels were darker than what came before, though it's become perfunctory for sequel directors to cite the former.

Bayona has also spoken about how the treatment of dinosaurs in Jurassic World: Fallen Kingdom would directly reference the treatment of animals in the real world, and the film makes quite an effort to push in those directions. There are warnings regarding genetic experimentation, cries of saving endangered species, discussions about using them as weapons, and echoes of isolationist practices being harmful in the long run. But those themes are dealt with in as perfunctory a manner as Bayona's Star Wars reference, as the film is happy to oblige and hand audiences what they've come for.

Because Fallen Kingdom doesn't have the time investment of a television series, its desire to reckon with the greed, selfishness, and neglect humans have for dinosaurs and also present the latter as vicious creatures who can tear apart the former in less than a second turns into a fast-swinging pendulum, with the filmmakers and (possibly) good storytelling on one end, and the studio and (obvious) piles of money on the other. It's an impossible balancing act, and it turns the newest Jurassic Park film into an unoriginal adventure whose soul is as authentic as the dinosaurs on screen.

Jurassic World: Fallen Kingdom begins by acknowledging who and what made Jurassic World the theme park possible. Three years have passed since the events of the first film, and the dinosaurs find themselves facing certain death after a previously-dormant volcano turns active. (Whose idea was it to choose an island with a volcano in the first place?) The US government convenes and decides to do nothing, since it was a privately-made debacle. There's a point here about government regulation, but don't bother looking as the film certainly doesn't.

Former corporate shill Claire (Bryce Dallas Howard) – her character was insanely sexist in Jurassic World, and Fallen Kingdom goes all out to correct its mistakes, including giving her sensible shoes – who saw dinosaurs as property is now a dinosaur-rights activist. She's contacted soon by Sir Benjamin Lockwood (James Cromwell) – he's a former business partner of Jurassic Park founder John Hammond (the late Richard Attenborough) – who plans to transfer the dinosaurs to another (non-volcano) island, where they can live in peace away from any tourist nonsense.

A big priority of theirs is the velociraptor named Blue, which brings her former trainer, the Indiana Jones-y Owen (Chris Pratt) into the fold. Throw in a couple of Claire's new co-workers who have polar opposite reactions to dinosaurs – a systems analyst (Justice Smith) who is extremely afraid, and a medic (Daniella Pineda) who's not afraid at all – and they're set to revisit the setting of the first film, except with a highly-active volcano in the mix this time. If you're wondering that sounds like a slightly upgraded rehash of what came before, rest assured it only forms the first third of the film.

The rest of Jurassic World: Fallen Kingdom takes place closer to home, i.e. where the dinosaurs were first brought back from extinction, at Lockwood's sprawling estate in Northern California. That gives the film a chance to feature its new child character: Lockwood's grandkid, Maisie (Isabella Sermon). Though she plays her role well, the film's darker intentions and a huge plot twist that's largely ignored because it'll be dealt with in the third and final chapter somewhat subdues her character. 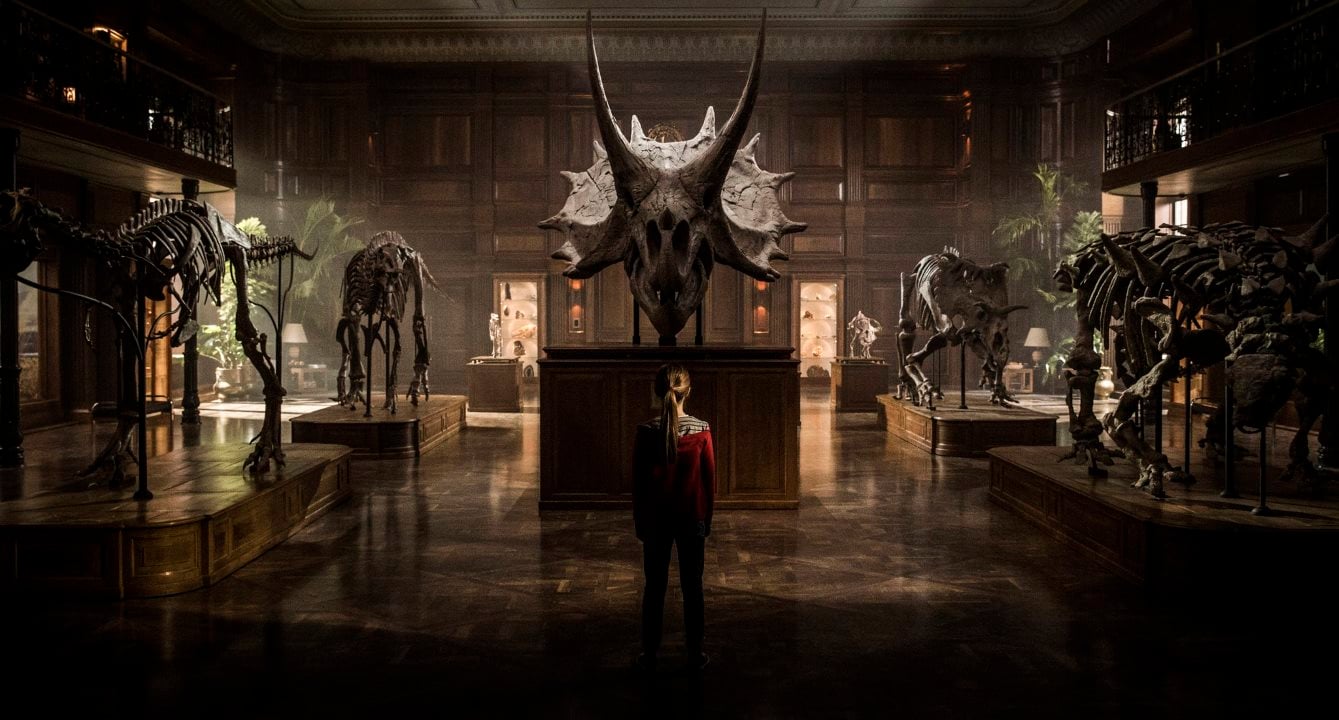 Unfortunately, that's a bit of trend here. Despite Howard and Pratt's best efforts, Fallen Kingdom doesn't have any interesting places to send their characters to, and is content with putting them in one bad situation after another. Smith and Pineda are served even worse; not only do they have no arcs of their own, the film seems to completely forget they even exist now and then. And though the film's marketing has hyped the return of Dr. Ian Malcolm (Jeff Goldblum), his role is little more than a minute-long cameo.

Frankly, that wouldn't be that much of an issue if Fallen Kingdom delivered where it mattered most: dinosaur action. After all, they are the real stars of any Jurassic Park film. Seeing T. rex tear through the frame is like a nostalgia hit for many, and Jurassic World's biggest achievement was creating a dino-human bond, between Blue and Owen. But unfortunately, the soft reboot franchise can't stop creating hybrid dinosaurs in a blatant attempt to increase the wow factor, and visually majestic yet otherwise empty moments of dinosaurs craning their necks up and roaring as loudly as possible.

It also doesn't help that just like Owen trained Blue, the Jurassic Park series has trained us to expect all hell to break loose. That turns every situation into a waiting game, to find out when and how things will get violently out of control. Even when those moments do arrive, they simply aren't as awe-inspiring, scary, or poignant as those that came before, with the sole exception of a few that can be counted on one hand. One refers the original Jurassic Park, a second is a touching shot of a brachiosaurus being left behind, and the third involves a dinosaur showing the acuity of pretense.

Though Bayona has some interesting visual ideas – there are multiple shots of dinosaurs' shadows on walls – and makes good use of the indoor setting as opposed to the traditional forests, the script for Jurassic World: Fallen Kingdom fails to liven up its set-pieces, in part due to its treatment of dinosaurs, who are subdued in one way or another for most of the running time. It's a shame; the writers' wish to create parallels to animal abuse and poaching means the dinosaurs spend too much time in cages, shackled, and sedated.

The Jurassic Park series has been on a decline ever since Spielberg first introduced us to the digitally-recreated reptiles back in 1993, but it continues to be a box office juggernaut and an adventure for the entire family. And though Fallen Kingdom is unsuccessful in pushing the franchise towards a more sincere take, it does manage to usher it into an era of new possibilities and properly justify its title (but not the subtitle), subtly at first and then in the most on-the-nose fashion with Dr. Malcolm in its closing moments.

Jurassic World: Fallen Kingdom is out Thursday, June 7 in India. There's one post-credits scene, so stay in your seats till the end.

product Out June 7, the sequel to Jurassic World – Fallen Kingdom – finds the leading duo (Chris Pratt and Bryce Dallas Howard) rescuing the dinosaurs from an active volcano, only to meet an even sinister fate.