Incredibles 2 Is Here and It's Excellent

It's been a while since we first met the Parr family of five in The Incredibles. Fourteen years, to be precise. The landscape of superheroes has been littered since, mainly thanks to the prolific nature of the Marvel machinery. But despite the boom in such stories, there isn't anything exactly like the Incredibles, a family that fights crime together. The closest thing to it would be the Guardians of the Galaxy, but even it can't match the unique dynamic. And that's why Incredibles 2, even after all this time, is still very much its own thing.

Moreover, writer-director Brad Bird – best known for Pixar's Ratatouille and Mission: Impossible – Ghost Protocol – who returns to the medium of animation with the sequel and in the same capacity as the first film, retains his superb command on pacing and staging. That results in a dazzling kinetic adventure, one that blasts out of the gate with the acceleration of the Incredibile, and never slows down. One action set piece early into the film has more ingenuity than most superhero films do in their entire runtime.

Of course, Bird is helped by the fact that his sequences are made entirely with computers. But that doesn't take away from the sheer creativity that goes into conceptualising and executing them in a fitting and stylish manner. Alongside that, Incredibles 2 supplies all sorts of laughs, with the baby Jack-Jack being at the heart of many, owing to his obliviousness and a list of powers that seems to have no end, giving us hilariously absurd situations one after another. It's a testament to Bird's script that he brings action and humour together with such ease and brilliance.

Incredibles 2 picks up right where The Incredibles left off, with everyone as they were: there's the super-strong father Bob aka Mr. Incredible (Craig T. Nelson), the super-stretchy mom Helen aka Elastigirl (Holly Hunter), the eldest teen daughter Violet (Sarah Vowell) who can become invisible and project force fields, the younger super-fast son Dash (Huck Milner), and the infant son Jack-Jack. "Supers" – as people with abilities are known in its alt-1960s world – are still illegal, and their attempts to do any good only gets all the blame of the collateral damage thrust upon them.

After a new incident makes life financially difficult for the Parrs, they are offered a way out by a silver-tongued owner of a telecommunications giant named Winston Deavor (Bob Odenkirk) who wants to change public perception and make superheroes legal again. He picks Elastigirl to lead the effort, which means Mr. Incredible has to stay home and watch the kids. The latter isn't exactly pleased with the idea because he thinks he can make a bigger contribution out there, while the former doesn't want to leave the family and break the law.

But the two are united by a common goal, in that they want to see the law changed so their kids aren't forced to live in hiding – there are easy parallels here for communities to fight injustice – and in turn leave the world a better place for the next generation. Helen realises she must leave the family to save it, and Bob accepts his new job as a responsible parent of three, which includes having to deal with Violet's adolescent outbursts, Dash's homework, and Jack-Jack's refusal to sleep. 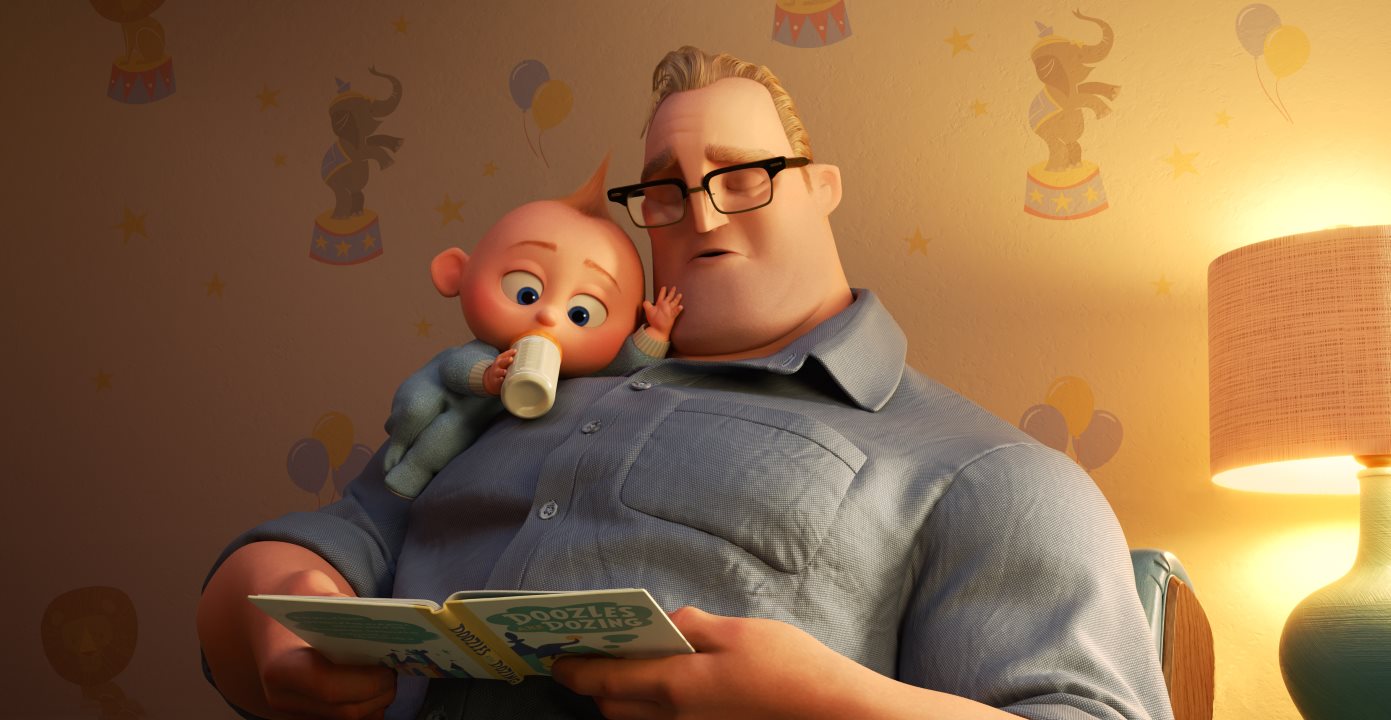 That puts a spin on the dynamic from the first film, and it allows Incredibles 2 to comment on several things. For one, it's now Helen getting the spotlight while Bob has to deal with the more mundane, yet equally important task of raising the children. Through it, the film brings about their respective shortcomings, and deals with their opinions of each other and how they see their kids. And while Helen is doing her best professionally in dealing with a new villain called Screenslaver, it's Bob who struggles back home and learns by failing repeatedly.

The villain seems to be an attempt at modern-day commentary by Bird, given he uses flashing screens to hypnotise people and will them to his way, a metaphor for people addicted to their devices. And if that's not clear enough, there's an extended monologue midway through the film where Screenslaver explains why he detests superheroes, blaming them for turning the rest of mankind into passive creatures, swapping real things for their simulated versions. Elsewhere, Bird has much to say about people with extraordinary powers living amongst us, but the film doesn't have the time to unpack any of it.

Incredibles 2 is better off when it's focused on the family side of things. Bird said as much in a 2015 interview, remarking he wanted to stay away from superhero genre tropes and focus more on what it takes to be a family, which he felt was more timeless. And the film excels in that regard; in the beginning, Bob wants to be leading the charge, Helen is ready to drop everything and come back home at the slightest sign of trouble, and both children don't wish to babysit Jack-Jack. Over time, they discover that family is about chipping in, while Helen finds she can't be everywhere. 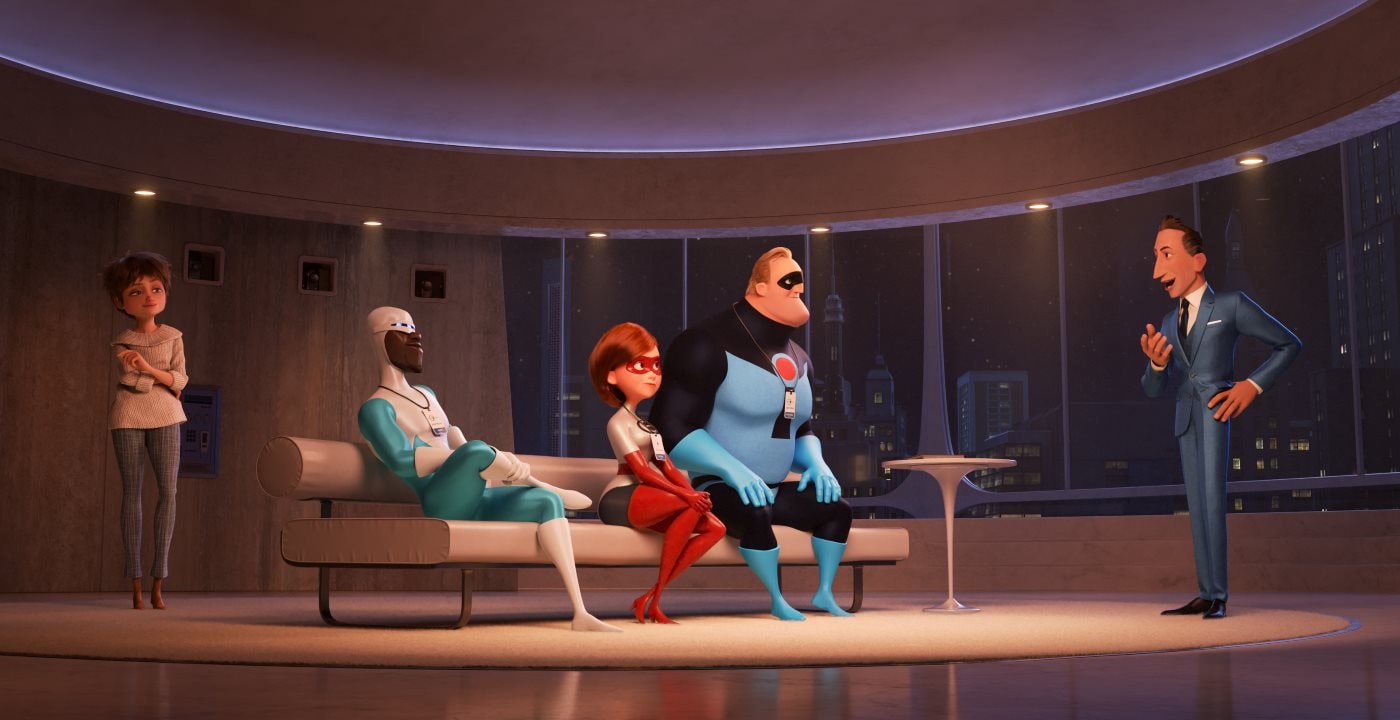 That the film manages to convey all that while being a rollicking memorable ride – action sequences with Elastigirl are awe-inspiring, while Jack-Jack steals every scene he's present in – is what makes it great. Its frenetic pace masks the well-constructed screenplay that must have been a pain to write, and makes it seem effortless. Add to that the terrific work of composer Michael Giacchino, who came up with new '60s-inspired jazz-orchestra themes to match the changed family dynamics of Incredibles 2, rather than riff on his well-known original tunes.

Ever since The Incredibles' critical and commercial success in 2004, Bird had been pestered about a sequel, to which he never fully committed and never fully shied from. Part of that was because he had certain story elements in his mind, and part of it was because he was too busy working on other projects, such as the aforementioned Ratatouille and Mission: Impossible, and overseeing other Pixar projects. But if this is what he can deliver after so many years with Incredibles 2, then Bird should feel free to take as much as time as he wants.

Further reading: Incredibles, Incredibles 2, Disney, Pixar
Akhil Arora Email Akhil
Akhil Arora covers entertainment for Gadgets 360, interviewing stars such as Christian Bale and Anurag Kashyap, covering series premieres, product and service launches across the globe, and looking at American blockbusters and Indian dramas from a global socio-political and feminist perspective. As a Rotten Tomatoes-certified film critic, Akhil has reviewed over 150 movies and TV shows in over half a decade at Gadgets 360. When he is not completely caught up with new film and TV releases, Akhil ...More
Nvidia Overestimated Bitcoin Mining Demand, Stuck With Excess GPU Inventory: Report
Instagram Launches IGTV Long Video App to Take on YouTube, Now Has a Billion Users

product Out June 22 in India, Pixar's long-awaited return to the world of The Incredibles from writer-director Brad Bird is a rollicking ride, with masterful action sequences and an endless amount of laughs.