Hawkeye Episode 3 Recap: For Echo and Ronin, It’s All About Family

Spoilers ahead for Hawkeye episode 3. 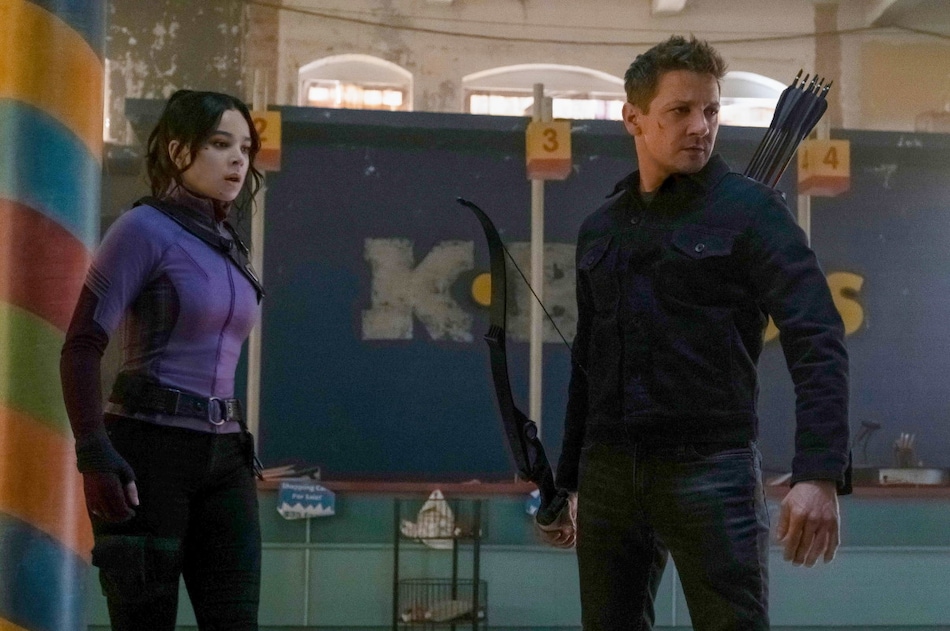 Hawkeye episode 3 — out now on Disney+ and Disney+ Hotstar — gives us more villains; I'm considering Jack Duquesne (Tony Dalton) to be one for now. It properly introduces the antagonist Maya Lopez/ Echo (Alaqua Cox) who was teased last week at the tail end of Hawkeye episode 2. Heck, Hawkeye episode 3 was nearly named after her (“Echoes”). Maya is important to the Marvel Cinematic Universe given Marvel has already confirmed the Echo spin-off. Hawkeye episode 3 also teased a big bad in “Uncle” whom you don't want to mess with, as Hawkeye/ Clint Barton (Jeremy Renner) notes. We never see him, but there are multiple references to Uncle in Hawkeye episode 3.

It's fair to assume that we will meet this Uncle in the second half of Hawkeye. Three episodes in, so now there is three episodes to go for this Marvel miniseries. The remaining three episodes will also deal with Clint's complicated legacy, with the building blocks of Clint having to reckon with his Ronin past slowly coming into view in Hawkeye episode 3. Neither Kate Bishop (Hailee Steinfeld), Maya, his family or anyone — save for Black Widow/ Natasha Romanoff who's dead — know that Hawkeye is also Ronin. And I imagine when that secret is exposed, it won't be pretty. It will be a disaster on an intrapersonal front, sure, but also publicly: an Avenger going around and killing people? That's not a good look.

Hawkeye episode 3 — titled “Echoes”, directed by Bert & Bertie, and written by Katrina Mathewson and Tanner Bean — opens in 2007 in a classroom. A young girl (Darnell Besaw) can't hear what anyone is saying but she can lipread and is quite ahead of her class, as her teacher checks up on her. It's clearly a young Maya Lopez, the hearing-challenged woman we met in Hawkeye episode 2. Later we see her at bedtime with her dad William Lopez (Zahn McClarnon). This is a nice scene, as they talk about the sound of the sky and dragons. Maya wonders why is she not going to deaf school. Dad admits he can't pay even though he once said he could.

“You have to learn to jump between two worlds,” William tells her daughter Maya who wonders how. The reply? By watching. Cut to a karate class where Hawkeye episode 3 reveals that May also has a physical disability: her right leg is a prosthetic. But that has never stopped her, and she's always been quite capable of handling her own, both as a child and as an adult (Cox). How did she come to hold a grudge against Ronin? One fight night, she witnessed Ronin's fury who took out a bunch of her friends before fatally stabbing her dad and whisking away.

It's a very emotional start to Hawkeye episode 3, as it instantly makes you feel for Maya who's now a complicated character. Sure, she might be high up the Tracksuit Mafia chain and doing bad stuff, but in the case of Ronin, it's all about taking revenge on the person who killed her family. That's human, even though the why of it is not as straightforward. You feel for Maya even as you realise that her dad was likely involved in something criminal.

Hawkeye episode 3 then brings us back to where we left in Hawkeye episode 2. It's now the morning of the next day — and the adult Maya has some questions for Hawkeye/ Clint Barton (Renner). He tries to assure her that Kate has nothing to do with Ronin, and that she put it on just like that. “Look at her, she's nine,” Clint adds. For Maya, this is the most solid lead she's had in locating Ronin, so she wants to know how they can help. Clint lies that Ronin is dead — well, figuratively, he is. Who got him? Black Widow, comes another lie from Clint. So, Ronin is dead and the person who got him is dead? That's convenient, Maya notes, before wondering how he knows. Clint says he was there.

Maya is angry, so she starts grilling Kate before squeezing her throat in frustration. As her second-in-command Kazi (Fra Fee) pulls her aside in a bid to calm her down in Hawkeye episode 3, Clint loses his duct tape and escapes deeper into the warehouse. The Tracksuit Mafia run after him, whom he evades by making shelves crash on them, before being confronted with Maya. She's more than a match for him. He loses his hearing aid and discovers her leg isn't made of flesh in the ensuing fist fight. Clint runs up to get his bow and then traps Maya with his arrows. Then he frees Kate before they run out and get into a car. Kate wants the red Dodge Challenger, but Clint doesn't want to destroy it.

This throws us into a long car chase, which begins with a short impressive long-take of sorts. There's a lot of comedy going on mostly, which is what Hawkeye is about to be fair. With Clint missing his hearing aid, he's unable to hear what Kate is saying. This results in them saying the same thing but a few seconds apart, with Clint repeating what Kate had suggested just a short while ago. On top of that, there's more comedy in Hawkeye episode 3 arising from the fact that Clint is out of regular arrows. So now, it's all trick arrows — none of which are labelled making it tough for Kate to figure out what does what. One arrow has purple Play-Doh, another has purple gas, yet another has a (useless) suction pump, and another pulls in surrounding objects to cause a blockade.

The Hawkeye episode 3 car chase ends on a bridge with traffic. Trapped and unable to proceed, Clint and Kate coordinate to use a Pym arrow and a regular arrow — that Kate retrieved from Maya's vehicle, so kind of her to carry Kate's bow to her. The Pym arrow expands Kate's arrow in size and smashes into a vehicle, splitting it into two. With Maya and the Tracksuit Mafia firing at them, they jump off the bridge and use a grappling-hook arrow to land on the New York metro train running under the bridge.

At home, after Kate is back walking the dog, Clint gets a call from his youngest son Nathaniel. Clint can't hear, so Kate has to write what Nathaniel is saying on a notepad. Nathaniel is bored, because he's an early bird and no one else is up at home. This Hawkeye episode 3 scene is designed clearly so that Kate understands what Clint is having to sacrifice to help her — he wants to be with his family for Christmas, but he's missing everything. First the gingerbread house, now the movie marathon, and possibly the whole thing — Nathaniel isn't optimistic that his dad will make it, so to prevent his own disappointment, he tells dad that it's okay if he can't make it home for Christmas.

Hawkeye episode 3 takes us back to Maya, with the Tracksuit Mafia clearing out the warehouse because it's compromised. Kazi tries to talk to her about how they are causing too much trouble, they are supposed to be keeping a low profile after all. Kazi notes that “Uncle” — whose face wasn't shown when he visited young Maya at karate class early in Hawkeye episode 3 — won't be happy. Your father didn't behave this way, he put the crew first. Maya says she's in charge, so they will look into Clint Barton as she wants.

And we go back to Clint and Kate in Hawkeye episode 3 who get his hearing aid fixed. In a diner later as they eat, Kate tells him that she's dreamed of doing this all her life. Clint tells her it comes with a heavy price, but rich-girl Kate brushes it off by noting the benefits: cool costume and trick arrows. Shen then shows him a flashy costume she designed — with hawk wings around the eyes, and a H on the forehead. It's over the top like something you would see in a comic book. Clint notes that he would never put that on because a) he's supposed to be a ghost, b) his wife would divorce him, and c) he's not a role model. But you are, Kate says. You left your family for a stranger so that they won't get hurt.

All You Need to Know About Hawkye on Disney+ Hotstar

As they head out of the diner and go for a walk, Clint and Kate discuss the folks after them: the Tracksuit Mafia. Clint says there's someone above Maya you don't want to mess with; there's that reference to Uncle again. In a cab later in Hawkeye episode 3, Kate brings up her mom's fiancé Jack Duquesne (Dalton) — who she thinks is trying to kill Eleanor (Vera Farmiga) and was involved in the death of Armand III (Simon Callow). Eventually, they decide to go to Kate's family apartment to learn more about the people they are facing. At the apartment, Kate logs into a Bishop Security system to find out about Kazi. He's an employee of Sloan Ltd, the computer says. Kate looks up Jack but she can't because she's locked out for security reasons.

Kate turns around to see that Clint isn't by her side. Thinking he's heard something in the apartment, Clint starts moving around to see if someone's there. Hawkeye episode 3 ends just as he is confronted by Jack who's got the Ronin sword aiming for Clint's neck. We will have to wait another week for Hawkeye episode 4 to see where that leads.

Hawkeye episode 3 is now streaming on Disney+ and Disney+ Hotstar. New episodes release every Wednesday around 1:30pm IST/ 12am PT.