Good Omens Review: Terry Pratchett Convinced Neil Gaiman to Bring This to the Screen and We’re All Better for It

David Tennant and Michael Sheen’s performances are a joy to watch.

Twenty-nine years since it was first published, Neil Gaiman and the late Terry Pratchett's biblical fantasy satirical novel Good Omens is getting its first on-screen adaptation at the end of the month: a six-episode miniseries premiering May 31 on Amazon Prime Video globally. As creator and showrunner himself, Gaiman has decided to bring forward the setting to modern-day England, although Good Omens still feels like a show from a different time considering the period elements scattered everywhere. Not to mention the fact that the story — about the end of times i.e. the Apocalypse — spans several millennia and criss-crosses dozens of different periods, starting all the way back at the Garden of Eden in 4000-something BCE.

At the centre of it all are Crowley (David Tennant) and Aziraphale (Michael Sheen), a demon and an angel respectively, who have been on Earth alongside human beings since the beginning. The former is the more conniving of the two, naturally, while the latter is the more innocent. And while the two are meant to be serving opposite sides — Heaven and Hell, not in that order of course — they have developed a close friendship having been around for six thousand odd years. On Good Omens, Aziraphale's optimistic naïvety complements Crowley's apathetic disregard of everything, and it's their dynamic, banter, and Tennant and Sheen's combined charisma that carries you across the show.

With Gaiman at the helm, there's a whimsical charm to Good Omens, which blends eccentric humour that takes pot-shots at everything from religion to Hollywood, historical fantasy and sci-fi happenings that span the Roman Empire and nuclear power plants, and adolescent drama. Most of the jokes are delivered by way of Crowley and Aziraphale's conversations, including jabs at Jeffrey Archer's books, The Sound of Music, and the Reign of Terror in 18th-century France. Some are literal, with the book's running gag about Queen turning into Queen songs playing in the background here. Other jabs are much sillier, about investing in Apple stocks in the 1980s and not buying Betamax in the 1970s. The humour on Good Omens does require you to know your history and pop culture, lest you might miss some one-liners.

Others still are delivered with the help of Good Omens' narrator, the voice of God: Frances McDormand, in this case. Many of her lines are verbatim from the book — saving Gaiman a little bit of effort — including the ones about the creation of the Universe (it wasn't millions of years ago as science says, God would know after all) and why most books say witches work naked (because men write them). There's a funny scene early in the first episode, where McDormand explains what two characters who winked at each other meant to say, and what they actually conveyed. She is also the guiding voice of the show, helping to explain events in case it's not clear to viewers what's transpiring on screen.

It's McDormand's voice that kicks off Good Omens, dating the beginning of it all to Adam and Eve, before jumping thousands of years ahead to the 21st century, as the Antichrist arrives on Earth as a baby. If you're not up on your biblical references, the Antichrist is the son of Satan (Benedict Cumberbatch) who will bring about the Apocalypse shortly after his eleventh birthday. With the help of the demon Crowley, Hell has deemed that the baby be placed with the family of an American diplomat in Britain, but due to a mix-up at a hospital run by Satanic nuns, he ends up with typical English parents in a quintessential English village. Meanwhile, having grown fond of life on Earth, Crowley and Aziraphale decide to groom the Antichrist, in hopes of postponing the end of times.

But the two realise they have been looking after the wrong kid only three days before the destined end of the world. As they set out to find the actual one, the world of Good Omens expands to include several supporting characters. There's the Four Horsepeople of the Apocalypse: Death (Brian Cox), War (Mireille Enos), Famine (Yusuf Gatewood), and Pollution (Lourdes Faberes), instead of Pestilence, as Aziraphale's boss Archangel Gabriel (Jon Hamm) tells us. And then there's another subplot about the witch Agnes Nutter (Josie Lawrence), who's part of the book's full title, and the person who burned her. The descendants of both — the occultist Anathema Device (Adria Arjona), and Newton Pulsifer (Jack Whitehall) — are also involved on Good Omens. 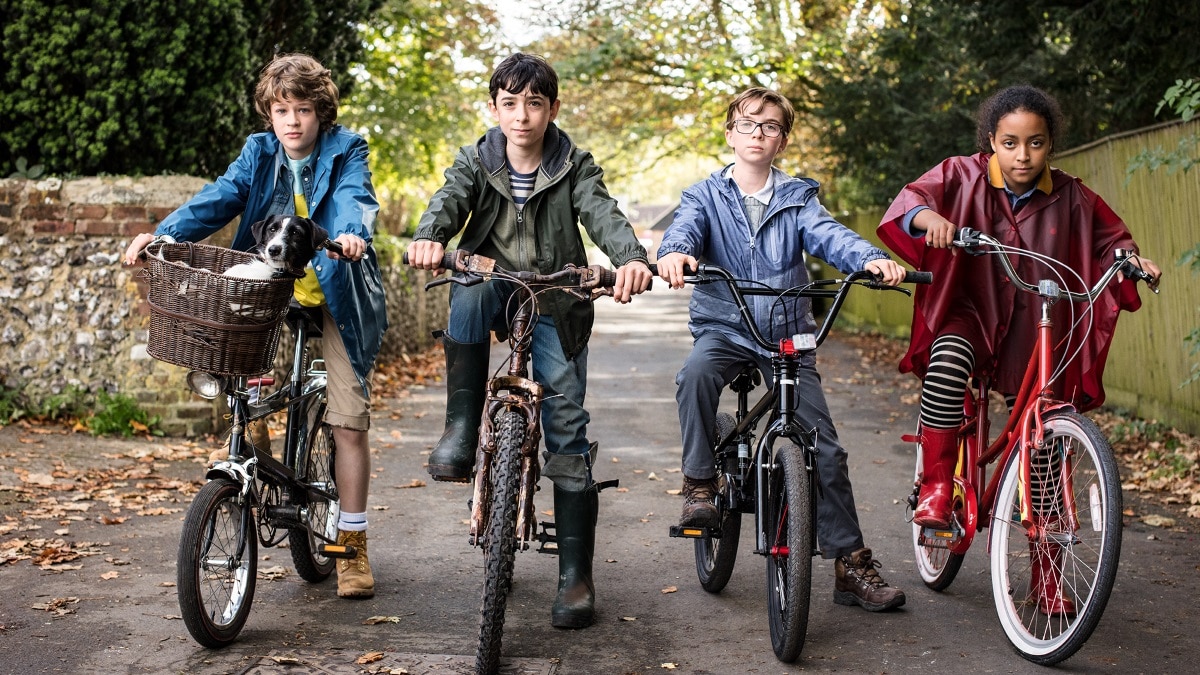 It's Them — the young Antichrist (left) and his three friends
Photo Credit: Amazon

That's not all. The show must also introduce the young Antichrist himself, and his three friends — which includes a feminist, a knowledgeable one, and the third capable of getting ice-cream all over himself in an instant — considering they play an important role later. It'll be immediately clear to anyone that this is a dense book. In the process, Good Omens the TV show ends up throwing a lot at you as exposition, not all of which contributes to forward momentum. For instance, the third episode's cold open lasts for half an hour, which is entirely devoted to the development of Crowley and Aziraphale's friendship across centuries, going from the Garden of Eden, Noah's Ark, the Crucifixion, Ancient Rome, Wessex, Shakespeare-era London, the French Revolution, to the Second World War.

Sure, it's fun to see Tennant and Sheen dress up in various period-fitting costumes and get in a joke or two that poke fun at religious absurdities, historical figures, or the Nazis. Good Omens does well to mine the “divine plan” narrative, in that God's workings are “ineffable”, as it gets in several pointed remarks about the great flood and the reason for Christ's death. It also takes aim at Shakespeare's writings and the English-French rivalry. But these asides, worth half an episode of a six-part miniseries, don't much serve a bigger purpose than ‘Crowley and Aziraphale have been around forever and share something that might be a little more than friendship.' The scenes would be much more meaningful if parallels were drawn with contemporary events of the main storyline.

It's possible the payoff exists in the second half of the series. (Critics, including us, had access to the first three episodes of Good Omens.) Hopefully, said second half will also explore some of the book's thematic underpinnings, including environmental destruction, and showcase the bigger role for Jon Hamm's Gabriel that Gaiman promised on the show. He was only briefly mentioned in the book but was to have an expanded presence in a planned sequel. The first part doesn't give Hamm enough to do and reduces him to an expository role. In fact, that's an issue for Good Omens on the whole, with the show sometimes explaining the same things twice 10 minutes apart. The show's VFX can be problematic too, with Crowley's snake eyes very distracting in close-ups and one creature effect off-putting. 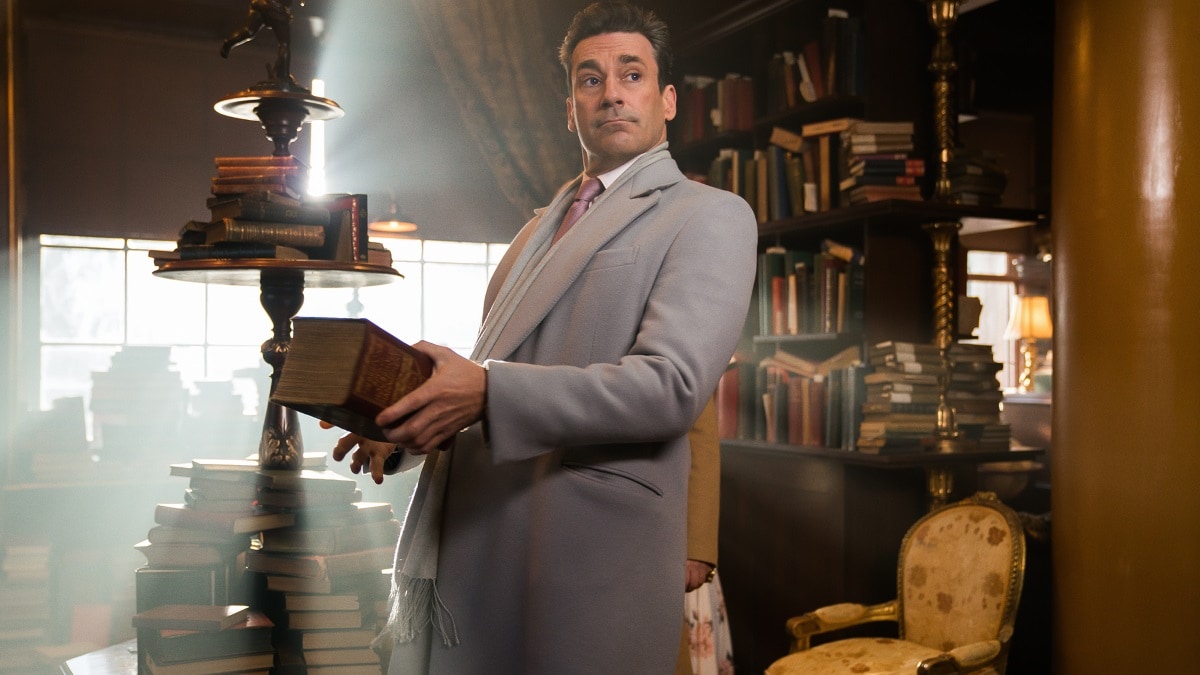 Ultimately, it's the acting prowess of the central duo — Tennant as the wily, crafty demon Crowley with a penchant for designer sunglasses, and Sheen as the gastronomic angel Aziraphale who also enjoys dealing in rare books — that is the best aspect. Additionally, Emmy-winner Douglas Mackinnon, known for Doctor Who and Sherlock: The Abominable Bride, does a commendable job balancing the various story-blocks and tonal differences he's forced to deal with. Good Omens spent nearly two decades in its road to the screen, and it never would have gotten made, had Pratchett not urged Gaiman to do so in a letter sent after his death in 2015. Fans will be no doubt be delighted, and the rest can tune in to see what this strange, zany world has to offer.

Good Omens is out May 31 on Amazon Prime Video in India.

Further reading: Good Omens, Amazon, Amazon Prime Video, Neil Gaiman, Terry Pratchett, David Tennant, Michael Sheen
Akhil Arora Email Akhil
Akhil Arora covers entertainment for Gadgets 360, interviewing stars such as Christian Bale and Anurag Kashyap, covering series premieres, product and service launches across the globe, and looking at American blockbusters and Indian dramas from a global socio-political and feminist perspective. As a Rotten Tomatoes-certified film critic, Akhil has reviewed over 150 movies and TV shows in over half a decade at Gadgets 360. When he is not completely caught up with new film and TV releases, Akhil ...More
Game of Thrones Season 8 Episode 6 Online: You Can Now Watch GoT Finale on Hotstar

product David Tennant and Michael Sheen star as a demon and an angel trying to prevent the Apocalypse in Good Omens, a six-part miniseries based on Neil Gaiman and Terry Pratchett’s novel, releasing May 31 on Amazon Prime Video.

Good Omens Review: Terry Pratchett Convinced Neil Gaiman to Bring This to the Screen and We’re All Better for It
Comment