Game of Thrones Season 7 Episode 7 'The Dragon and the Wolf': The Top 7 Moments 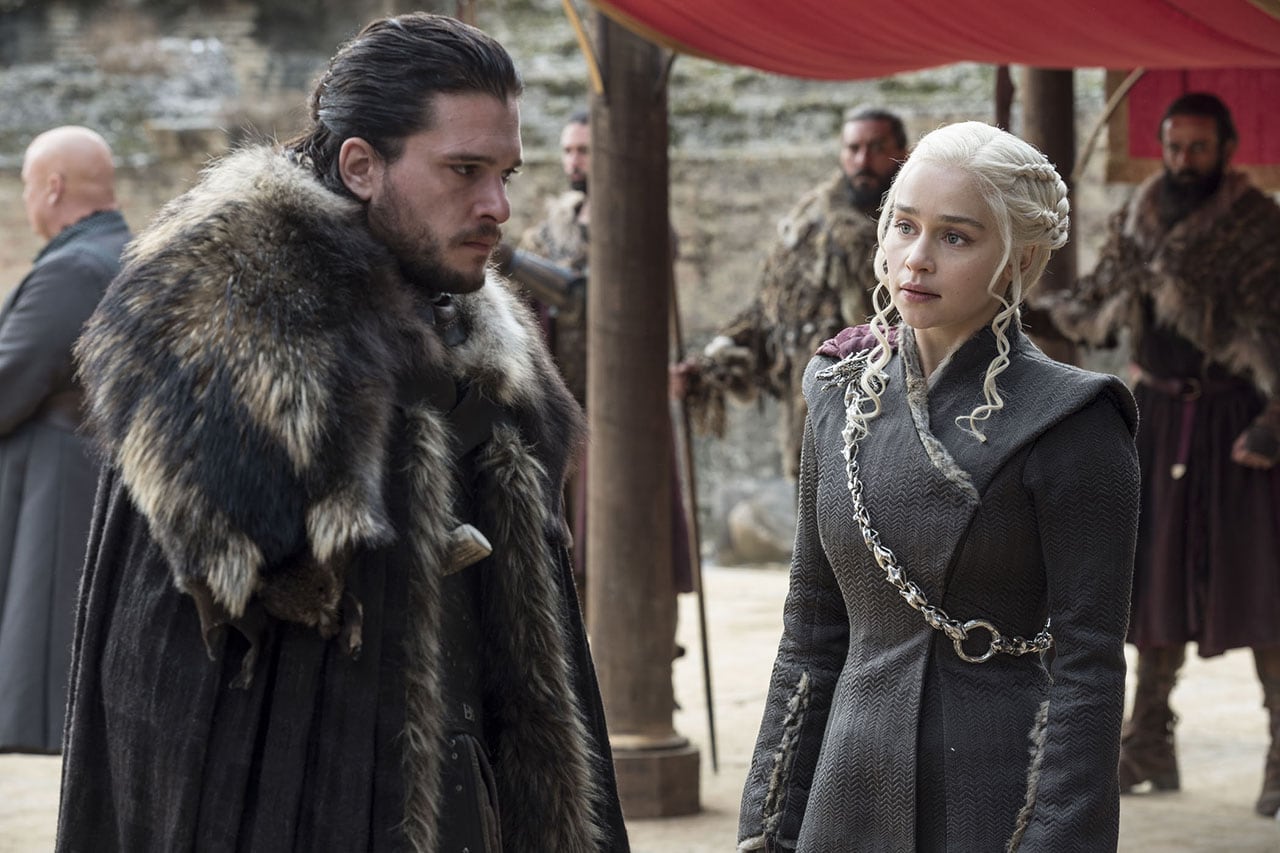 Game of Thrones season 7 episode 7 - the final episode for the season, and the longest in the show's history - saw everyone coming together in King's Landing to discuss the big threat looming on their kingdoms. Named “The Dragon and the Wolf,” the Game of Thrones season 7 finale is centered on what Jon Snow calls The Great War, and is filled with some epic moments. In fact, you will notice that the writers have purposefully set aside some of the most important information for the end. There was a lot to choose from this week's Game of Thrones, and we’ve had to exclude the clever little chats that occurred between many, including Brienne and The Hound.

Daenerys making a stylish entry
In the first few minutes of Game of Thrones season 7 episode 7, while everyone else walked to the Dragonpit for the big meeting, Daenerys chose to show off her strength by flying down on Drogon. Why not, when you’ve got your own fighter jet, which sends a clear message that you’re not to be messed with.

It also provided the Dragon Queen with a little win, as she successfully annoyed Cersei by making her wait. “We’ve been here for some time,” the ruler of King’s Landing said with clenched teeth, seething at Daenerys, who replied in a cheeky fashion: “My apologies.”

Of course, it was an intentional move on the Targaryen’s part, and it helped establish a stern dynamic that will no doubt be further explored in the Game of Thrones final season.

Cersei sabotaging the chances of the living
After Jon decided to not lie (he’s like his father uncle Ned, he knows) and extend the truce, saying he couldn’t serve two queens, Cersei ended their negotiations and left. It took a brave Tyrion to head into the Red Keep alone, in a bid to try and convince her to see what they’re up against.

And it seemed to work, with Tyrion playing defence to her sister’s attacks. The two came to an agreement in Game of Thrones season 7 finale over their common love - wine - and Cersei promptly returned to the Dragonpit, to pledge her armies in the fight against the White Walkers. It was a 180-turn from her previous stance, and Jon’s look at Tyrion signified their surprise at his skills.

But as she has noted many times before, Cersei has gotten really good at playing the game of thrones. She confessed to Jaime that Euron didn’t leave her, but has rather departed for Essos to fetch the Golden Company, with the gold they stole from Highgarden. Meanwhile, she’d rather stay in the south with her armies and have her child, than risk fighting alongside their enemies.

End of the road for scheming Littlefinger
Since the beginning of the feud between the Stark sisters, we had hoped they would be able to see through Littlefinger’s scheming. For a while, the opposite of that seemed to continue in the season finale, as he sat opposite her and whispered her darkest fears into her ears.

But in a twist that Lord Baelish himself would have been proud of - if he wasn’t the one caught in it - Sansa invited Arya into the Winterfell great hall, and proceeded as if everything was going according to Littlefinger’s plan, until she said his name.

A man who anticipates every move of the people around him was visibly shook by it all, and he begged for his life, after his words were turned on him by Bran and Sansa, and the Knights of the Vale refused to protect him. It was poetic justice that Arya split his throat open with the knife he had used to drive a wedge between Starks and Lannisters.

Theon begins his path to redemption
Theon has seen all kinds of hell during his tormented life: being ignored by his father, feeling like an outsider at Winterfell with the Starks, getting captured by Ramsay who turned him to a castrated pet of his, and then having the shame and failure of leaving his sister behind when Euron surprised them earlier this season.

But finally, as we saw in Game of Thrones season 7 episode 7, the man is taking charge of his own destiny. A chat with Jon helps him realise what he must do, but not before he proves a point to his own men. His fist-fight with a Greyjoy soldier doesn’t go his way at all, until the man makes the error of kicking Theon in the groin.

He has become the butt of many jokes after losing his manhood, but this is the first time it’s come to his aid. Theon is now on his way to the Iron Islands, and Euron’s voyage to Essos should help him in freeing Yara.

Jon and Daenerys hook up
We saw it coming, right from the way other characters nudged the two together, down to the title of the episode. The trouble was that the shortened run of Game of Thrones season 7 didn’t allow the writers to build the romance as well as they could have, and it always felt rushed.

Still, they’ve seen witnessed each other’s strengths: Jon’s resolve and willingness to thrust himself into the fight, and Daenerys’ own courage at flying into battles on the back of her dragon; alongside the common ground and respect they’ve found for the other, during their short time together.

Jon and Daenerys coming together is great for the two of them, as they’ve clearly fallen for each other, and it would also be great for Westeros, were it not for the political and incest-filled ramifications on the horizon.

Jon Snow is actually Aegon Targaryen
While the two rulers were busy getting into bed together, Bran and Sam’s chat led them towards a big season finale reveal that the audience has known for a while. Since observing Lyanna giving birth last season, Bran has known that Jon was the son of Rhaegar and Lyanna, and he finally told someone.

Bran thinks that makes Jon a southern bastard, so his last name should be Sand, not Snow. But Sam has the other piece of puzzle, in that he knew that Rhaegar and Lyanna got married, so really, Jon is a legitimate child. Bran observes that makes him the rightful heir to the Iron Throne.

Lyanna provided her brother Ned with the son’s name - Aegon - though Ned chose to bury that information in lieu of protecting the child.

The Wall is rendered useless
For thousands of years, the Wall was the only thing that stood between the living and the dead. And now, it’s been blown apart.

For a time, we thought Bran’s mistake at the Three-Eyed Raven’s cave last season would cost them. Instead, it turned out to be the foolish plan to capture a wight that might doom the Seven Kingdoms.

Thanks to the undead Viserion, the Night King flew in and opened up a massive hole in the Wall. His blue fire was up for debate last week, but now that’s clear. Whether Tormund, Beric, or anyone else made it out alive isn’t.

What was your favourite Game of Thrones season 7 finale moment? Let us know via the comments.

Samsung Has a More Advanced Digital Assistant Than Bixby. But Where Is It?
WhatsApp Beta for Android Gets Verified Accounts: Here's How It Will Work