Four More Shots Please Is Fresh in the Streets, a Mess in the Sheets

Amazon's first original scripted comedy series from India — Four More Shots Please!, out now on Prime Video globally — is about the lives of as many millennial women as there are tequila drinks in the title. To some, that might feel reminiscent of Lena Dunham's comedy-drama Girls, though most of the leads here tilt towards the latter half of their twenties and early thirties, with the age differences spanning nearly a decade between the quartet. Four More Shots Please! is also a lot more glamorous — all of them live in Mumbai's posh southern district, as opposed to the gritty Brooklyn, New York of Dunham's show — which makes it more akin to Girls' spiritual predecessor, Sex and the City. Naturally, its closest homegrown equivalent is last year's Veere Di Wedding, which also centred on four glamorous women.

Unfortunately for Amazon, that's not the only similarity between Four More Shots Please! and Veere Di Wedding. Besides the obvious, superficial comparison of how both are possibly lavish to a fault, with ever-changing clothes for the four protagonists, the new Amazon series — created by Rangita Pritish Nandy (Pyaar Ke Side Effects), with a script by Devika Bhagat (Jab Tak Hai Jaan) and Ishita Moitra (Half Girlfriend) — also tends to be as shallow as the film. The pre-adult mentality of Four More Shots Please! is made evident by the series' unquestioned acceptance of how much neat alcohol the women can gulp down, with nary an acknowledgement of its disastrous effect on human bodies, let alone a self-aware joke.

For what it's worth, Four More Shots Please! is carrying some empowering and powerful ideas in its bottle, including body positivity, bisexuality, online abuse, and single motherhood, which are still too rarely represented on the big screen in India. But merely having good ideas isn't enough. Filmmaking is about executing them well enough to warrant interest, and Four More Shots Please! repeatedly fails to punch above the desired level. It simply doesn't have the necessary nuance from the writing, directing (Waiting's Anu Menon), or editing (Bombairiya's Antara Lahiri) standpoint. For all the freshness behind the scenes — in addition to being a story about four female friends, it's been made by a (largely) all-female crew — the output is as routine as they come.

Worse yet, Four More Shots Please! doesn't trust its audience to be smart enough and pick up on important moments, which is why every big event is instantly accompanied by a background song or a sound effect. Scenes that ought to be intimate are made soaring, filmed as if the whole thing is meant to be a music video, betraying an inexperience in direction. And in nearly every case, the new Amazon series opts for melodrama over a better alternative — authenticity, absurdity or relatability — which suggests that the scripts could have used another eye. It could do well to learn from Girls or several other modern comedy shows, be it the caustic wit of Better Things or Fleabag, the irreverent nature of Broad City, or the lived-in feel of Casual or Catastrophe.

The central quartet of Four More Shots Please! involves Damini Rizvi Roy (Sayani Gupta, from Inside Edge), an award-winning journalist and founder of an investigative journalism website, who usually prefers masturbation to sex because of the attachment that comes with the latter; Anjana Menon (Kirti Kulhari, from Pink), a lawyer and single mom who begins to spiral after her ex-husband Varun Khanna (Neil Bhoopalam, from 24: India) gets serious with his new girlfriend Kavya Arora (Amrita Puri, from Aisha); Umang Singh (Bani J, from MTV Roadies), an openly-bisexual fitness trainer who falls for Samara Kapoor (Lisa Ray, from Water), a closeted Bollywood celebrity; and Siddhi Patel (Maanvi Gagroo, from Tripling), a virgin and jobless in her early 20s who has always been body-shamed by her mother Sneha (Simone Singh, from Kal Ho Naa Ho) and accepts that marriage is one way to get out from under her.

We first meet the four in present day — last October, to be precise — as the show weaves through their personal and professional lives, with a much bigger focus on the former bit. But the scenes in Four More Shots Please!'s opening episode give you the feeling that they are set up to introduce the characters to the audience, and hence don't feel true to its own world. After Anjana is mocked for not knowing Marathi by the court and loses a defamation lawsuit, Damini calls it out for misogyny and sexism. But if Anjana is a successful practising lawyer, given her South Bombay apartment and her lifestyle, surely the judges know her by now? It also has tendency to be on the nose, with the show's name literally said out loud by the characters, or the pilot episode ending with a song-and-dance number. Each episode of Four More Shots Please! kicks off with a statement that will serve as the ethos for the next half hour, with the early episodes — critics, including us, had access to the entire 10-episode season — fitted with flashbacks for one character at a time, which sketches out their backstory. Umang's is easily the most powerful of the lot, and Anjana's brings out the most grounded and honest scene of the first season, while the other two are perfunctory. Siddhi's, particularly, has the potential to do so much more than the same beats it keeps hitting about the lack of motherly love that drives her to her breaking point. A better show would bring up why Sneha thinks the way she does, partly owing to the ingrained patriarchy of Indian society, but this doesn't have the vision to see that angle, let alone explore it.

At the same time, some of the best writing Four More Shots Please! manages during its first season comes as a result of those flashbacks, with the sixth episode focused on the story of how the four met. Through exchanges and vignettes, it encapsulates the various problems women — including millennial ones, even those in modern, cosmopolitan Mumbai — face in India, the adventures twenty-something friends go on together, and how they have grown, as a result, on that journey. For these group of tequila lovers, it's their transformation from a partly-naïve small-town girl to a fearless woman, from shedding their innocence for an inner awakening, or realising the importance of their freedom and reclaiming their life.

For a show meant to be a comedy-drama, it fails repeatedly in both regards. It took two episodes and over 45 minutes for the first good joke in Four More Shots Please!, where Gagroo quotes John Mayer's 2001 hit “Your Body Is A Wonderland” as a defence for not defiling her body with a condescending know-it-all guy her mother set her up with, and then immediately jumps at chicken wings she spots on the table. And the same guy helps deliver the only standout absurd moment, after he objects to being offered a sanitary napkin to stop his nosebleed. On the whole though, genuinely funny moments are few and far between in ‘Four More Shots Please!'. 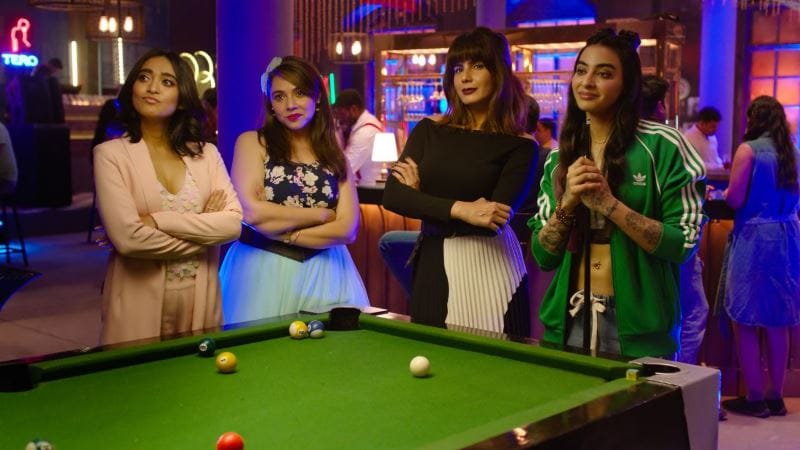 From the narrative (drama) standpoint, it's the second half of the show where things start to go downhill. There's a generally accepted limit to happy coincidences in entertainment and Four More Shots Please! blows past that with a series of chance encounters during a birthday weekend trip to Goa that feels all too Bollywood. It could have been completely avoided by simply putting the necessary blocks together in an organic fashion, but the show's wish to have Goa as a be-all and end-all, in the teenage dream way-of-life, is a major undoing. And it doesn't help that the episode also lacks majorly in craft, with establishing shots used way past they are needed to essentially string together a loose script.

Four More Shots Please! wants to be an easy, frivolous comedy that also tugs at your heartstrings, which explains the season finale's chickens-coming-home-to-roost approach, after nine episodes of egging on the characters' slippery-slope behaviour. But for those story threads to land with any weight, they would have to be set up and be executed in a convincing fashion, which they aren't. It might be an all-women show in front and behind the camera, but that doesn't prevent it from succumbing to the same problems that plague the entertainment industry. And it has limited success with female topics too, such as falling into the ‘bisexuals are promiscuous' trope while skewering ‘Manic Pixie Dream Girl' elsewhere. Whatever money Amazon threw on the show is on full display, but it's ultimately just a pretty shell.

Further reading: Four More Shots Please, Amazon, Amazon India, Amazon Prime Video
Akhil Arora Email Akhil
Akhil Arora covers entertainment for Gadgets 360, interviewing stars such as Christian Bale and Anurag Kashyap, covering series premieres, product and service launches across the globe, and looking at American blockbusters and Indian dramas from a global socio-political and feminist perspective. As a Rotten Tomatoes-certified film critic, Akhil has reviewed over 150 movies and TV shows in over half a decade at Gadgets 360. When he is not completely caught up with new film and TV releases, Akhil ...More
Kingdom Hearts 3 Leak May See Square Enix 'Reconsider' Physical Editions
Google Asks US Supreme Court to End Oracle Copyright Case
product Amazon Prime Video’s first original scripted comedy series from India, Four More Shots Please!, is the story of four millennial women in the city of Mumbai, who live life by their own rules.

Four More Shots Please Is Fresh in the Streets, a Mess in the Sheets
Comment