Fast and Furious 8: The Dumb, Fun Action Movie You've Been Waiting For?

Ever since Justin Lin gave us Fast Five in 2011, the franchise has veered away from its origins in street racing towards the heist genre. And it’s worked. Fast Five was easily the pinnacle of the Fast and Furious franchise, with a final action sequence that will likely never be rivalled for sheer ingenuity, and excitement by the series itself. That helped its future instalments break box office records, over and over, with the latest in the series - Fast and Furious 8 aka The Fate of the Furious - aiming to continue the trend.

Whatever the hell that the plot may purport to be, Fast and Furious films are enjoyable for their million-dollar over-the-top action sequences that ooze fun, defy all kinds of logic, and contain a healthy amount of wise-cracks. Two cars dragging a bank vault through the streets of Rio de Janeiro? Sure. The crew holding down an aircraft that tries to take off from an (endless) runway? Who cares. Dom (Vin Diesel) and Shaw (Jason Statham) starting a fight that only exists because Dom willingly discards his shotgun? Why not.

Unfortunately, Fast and Furious 8 discards all that for a large part of its runtime. It’s written by Chris Morgan, who’s now a veteran with his sixth entry, with a new director in place: F. Gary Gray, known for his work on The Italian Job (2003), and Straight Outta Compton (2015). The new entry is set after the events of Furious 7, with Dom and Letty (Michelle Rodriguez) on a honeymoon in Cuba, when hacker villain Cipher (Charlize Theron) ambushes Dom with spoiler-y blackmail. So, where does The Fate of the Furious falter? Does it get anything right? Ready, set, go.

Note: mild spoilers about certain action sequences, all of which can be glimpsed in trailers. 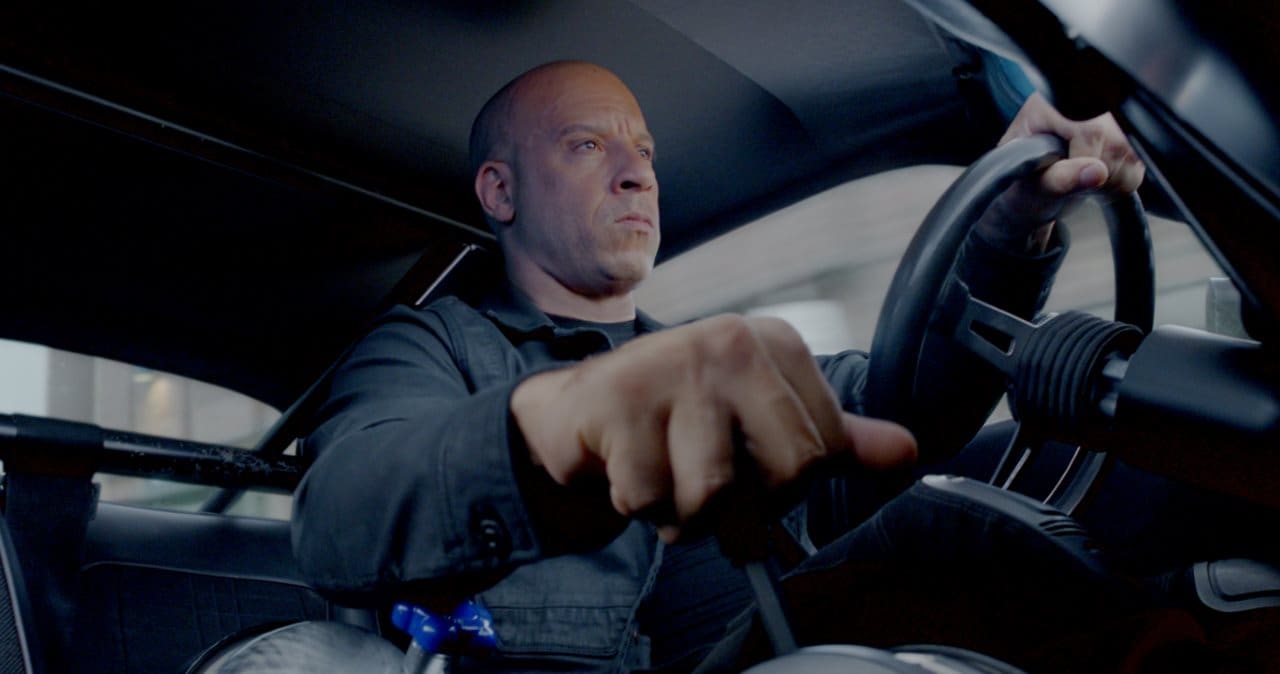 1) Fast and Furious 8 takes itself too seriously
From the headline, these films work best as big dumb, action blockbusters. Just look at how absurd that name is. This isn’t a franchise that was moulded carefully with the intent of creating one; it just organically found itself in that spot. 2 Fast 2 Furious (2003) could have been easily been the death of the franchise, and Fast & Furious (2009) nearly killed it with its sad plot, and reliance on CGI (F&F is known for its practical effects, performed by a capable stunt-team).

Gray spoils Fast and Furious 8 not by embedding the film into an all-too serious plot with save-the-world stakes – that’s been done before – but because it forgets to have fun along the way. That’s the film’s crime. It's too dour and bland.

The Fast and Furious series has always been about wish-fulfilment and living out your fantasies (at least for the 15-year-old inside you) but here, Gray mutes and drains the film of both colour and energy. Apart from an opening scene in Cuba, there's frankly too much of desaturated blue and silver throughout Fast and Furious 8. Even the style of humour and wise-cracks the franchise is known for, don't roll around until the film's final third. 2) All that Fast and Furious car action just isn’t as thrilling as before
Fast and Furious 8 opens with a race between Dom, and his cousin’s Cuban enemy, featuring two very opposite cars – one on its last legs, and the other the talk of the town, respectively. That sequence ends with Dom reversing over the finish line as he wins narrowly, the kind of outlandish cool factor the franchise continually aspires for.

But in terms of those ‘over-the-top action sequences’, the first memorable one in Fast and Furious 8 doesn't come until – you guessed it – the final half hour. For a film that runs for 2 hours and 16 minutes, that’s a really long wait. That’s not to say the rest of the film doesn’t have action in it, it just isn’t memorable.

For example, there’s an extended sequence midway through the film in New York City, where Cipher (Charlize Theron) – the film’s hacker villain – hijacks the city’s car through zero-day exploits on the software end, and turns them all into self-driving bots for her own use. In a following scene, dozens of cars exit a high-story garage to fall onto the cars below. It makes for great carnage, but little else.

Fast and Furious was born out of a celebration of both great-looking cars, and the driving culture. The new film's New York segment goes against that by taking the all-important human element out of it. No one cares if a Bentley drives itself into a Mercedes. But put Dom and Hobbs (Dwayne Johnson) in those vehicles, and you have everyone’s attention.

And that’s precisely what happens – the scene in Fast and Furious 8 becomes a lot more fun when the gang literally latches onto Dom's car to stop him. That memorable scene we mentioned? It involves Hobbs telling Roman (Tyrese Gibson) to take the wheel as he gets out of his car, and pushes away a torpedo (emphasis: torpedo!) with his feet. It’s utterly ridiculous, and makes no sense. But then that's what the audience is here for, so give them that. Unfortunately for all of us, there's too little of that in Fast and Furious 8. 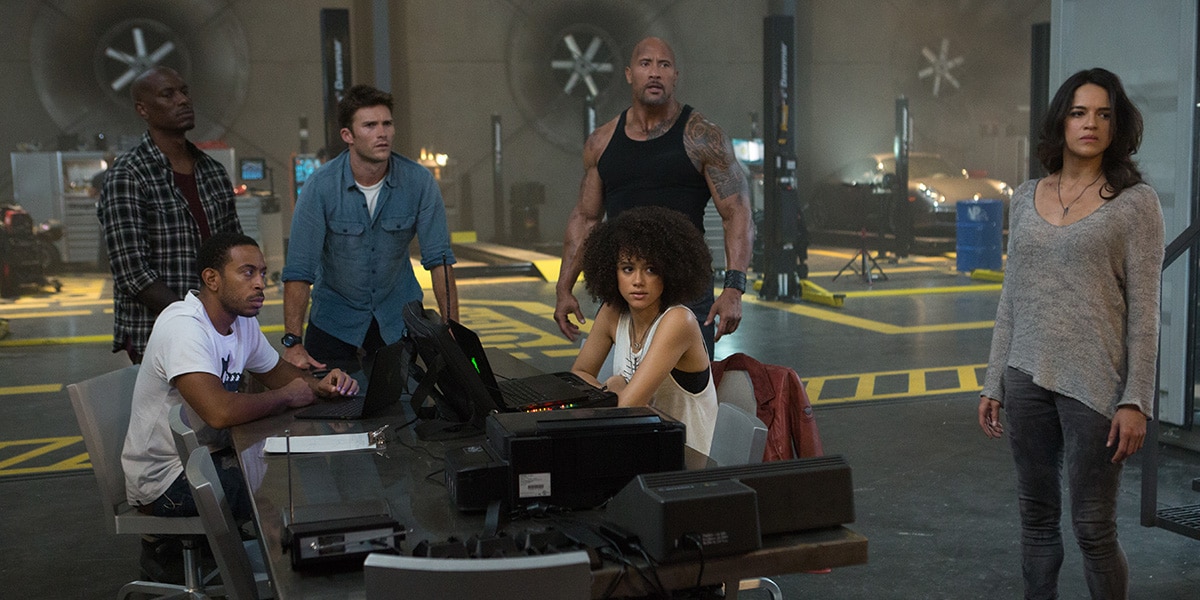 3) The ensemble cast suffers in every possible way
This might sound ludicrous, and we can’t believe we’re saying this, but the cast for Fast and Furious 8 feels small. That shouldn’t be the case, considering how many there are: Dom (Diesel), Hobbs (Johnson), Shaw (Statham), Letty (Rodriguez), Roman (Gibson), Tej (Ludacris), and Ramsey (Nathalie Emmanuel). The film even adds a deputy to Mr. Nobody (Kurt Russell) in Eric Reisner (Scott Eastwood), who plays a by-the-book law man.

But there are three reasons for why Fast and Furious 8 doesn’t quite come together the way it should. One, the series has possibly lost too much of its core. Gisele (Gal Gadot) and Han (Sung Kang) left at the end of Fast & Furious 6 to maintain continuity, while Brian (Paul Walker) and Mia (Jordana Brewster) left after Furious 7, owing to Walker’s death in a car accident. All those actors brought a different dynamic to the group, and it almost feels hollow now.

Two, Fast and Furious 8 divides the cast further by pitting Dom against everyone else. That may have been an appealing prospect on paper, but it plays out terribly on screen, especially when he turns to outside help instead of asking his loyal gang, the one he keeps referring to as family.

Three, Fast and Furious 8 separates its already fractured cast into smaller chunks, to an extent that Diesel and Johnson don’t share more than 30 seconds on-screen. Fast and Furious became fun with Fast Five because it was about the team that resembled a family. When you take that away from them, and place them in a heavy drama (see point 1), it spoils the well-oiled engine of the franchise. 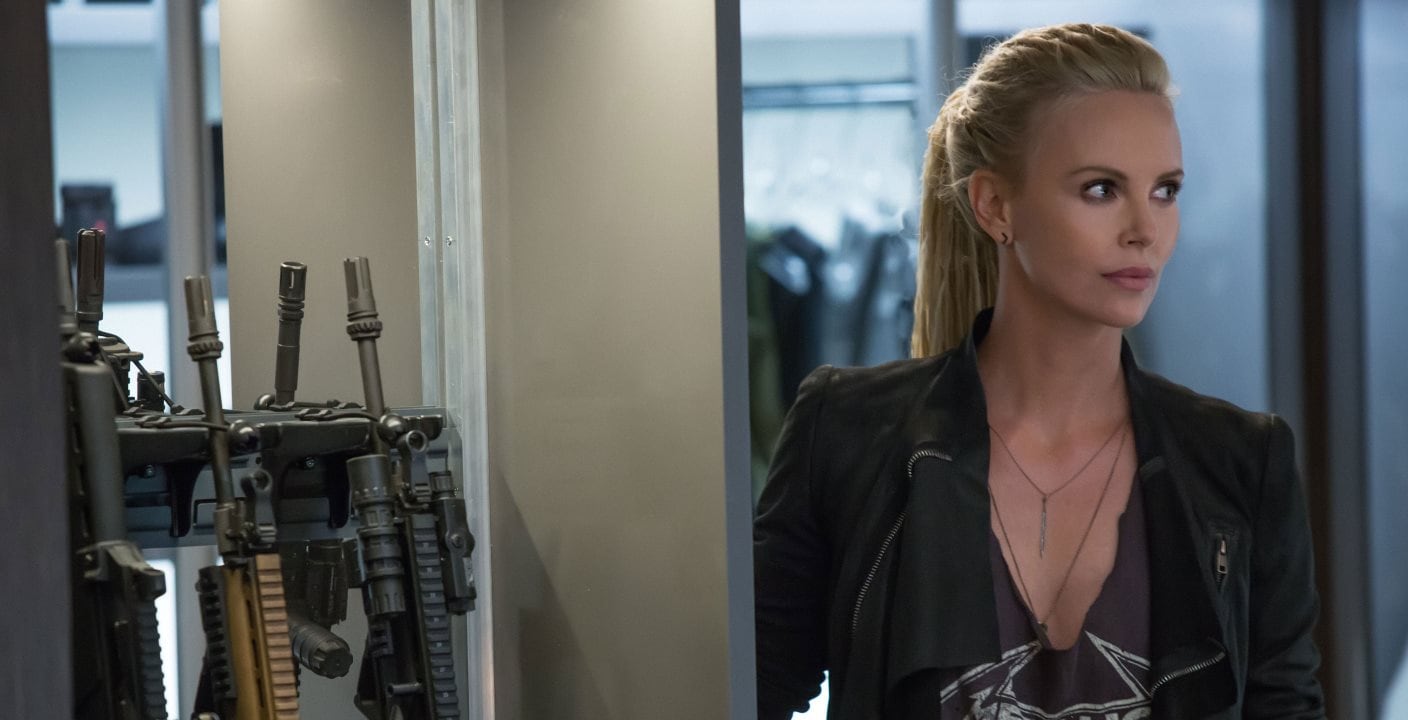 4) Cipher is a weak villain, and it’s not Charlize Theron’s fault
The problem of divvying up its two-hour runtime extends to Fast and Furious 8’s villain, too. Being a sophisticated hacker, Cipher is not only given a terrible name, but gets relegated to a plane in the sky for the entirety of the film. She shares scenes only with Dom, and never comes face-to-face with the rest of the diverse crew.

Film is a visual medium, and it works best when characters inhabit the same space, which is why you’ll always see that characters will be given every excuse to meet up and talk, rather than just chat over the phone. That holds even truer for a series that’s frequently about chasing each other in vehicles.

Unfortunately, the script for Fast and Furious 8 doesn’t give Theron any hands-on action. She is a great action actress – Mad Max: Fury Road is proof of that – but she just isn’t given enough to do with here. It doesn’t help that she gets monologues on choice theory, or stupid lines like, “It’s zombie time.” 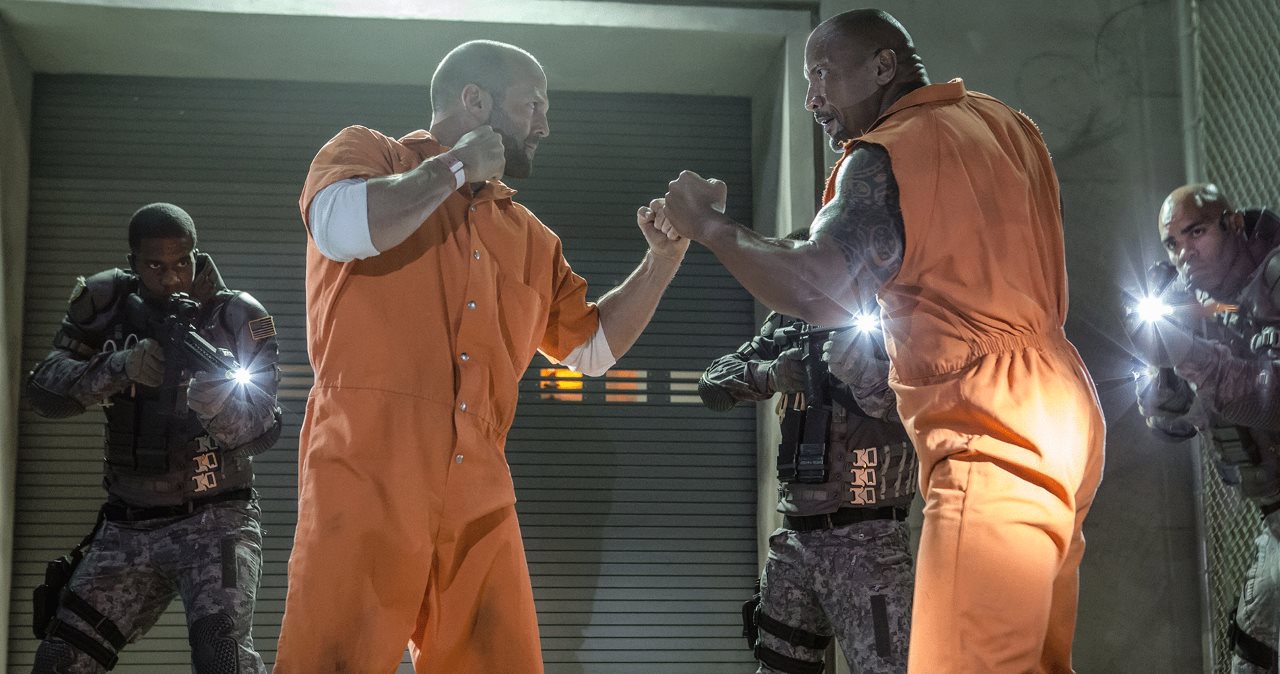 5) India’s rating and certification process further kills the film
With the wise-cracking nature of the crew, come the regular insults filled with all kinds of profanity. India doesn’t have a direct equivalent of PG-13 (the film’s rating in the US), and it has been certified as U/A here. But despite that classification, and mainly thanks to the CBFC's penchant for acting as moral policemen, the film's moments lose their desired impact.

Sure, that's not a problem unique to Fast and Furious 8, but it definitely dilutes the fun. It’s frustrating to watch the full, raw power of the actors’ delivery – especially Statham’s – wasted on the big screen, muted because the certification board doesn’t deem it ‘right’.

Q) Should I watch Fast and Furious 8?
From start to finish, no. Fast and Furious 8 undercuts nearly everything that made its predecessors enjoyable as mindless escapism. If you’re a die-hard fan, you probably don’t care about our opinion anyway. For the rest, the eighth instalment of Fast and Furious lacks the flavour and sentiment that somehow made a film series about big biceps and big engines one of the most dependable franchise to come out of Hollywood.

What was once merely a street gang of petrol heads now consists of globe-trotting James Bonds who have enough superpowers to emerge unscathed from the wildest crashes and the biggest explosions. Hopefully, the next two entries – in 2019, and 2021 – will course-correct and find their groove.

The best way to watch Fast and Furious 8 is to wait for it to hit TV – tune in for the opening, disappear for an hour, and then return for the final third. Speaking of the latter, there’s a fantastic sequence involving Jason Statham and noise-cancellation headphones that’s worth a watch.

Further reading: Fast and Furious, Fast and Furious 8, The Fate of the Furious
Akhil Arora Email Akhil Akhil identifies himself as a stickler for detail and accuracy, and strongly believes that robots will one day take over most human jobs. In his free time, you will find Akhil beating the computer at EA Sports FIFA or streaming new highly-rated TV series. More
CIA Chief Calls WikiLeaks a 'Hostile Intelligence Service'
WhatsApp Tells Supreme Court It Will Cooperate in Blocking Sexually Offensive Videos

product The eighth instalment in the long-running franchise goes down the wrong road in search of a new direction.

Fast and Furious 8: The Dumb, Fun Action Movie You've Been Waiting For?
Comment