The Expanse Is More Sure of Itself in Season 3

For the first two seasons, The Expanse – based on the eponymous sci-fi series by James S. A. Corey, the pen name of authors Daniel Abraham and Ty Franck – has been ratcheting up the hostilities between its three main factions Earth, Mars, and the (Asteroid) Belt, showing us the inevitable conflict through various viewpoints, while delivering some terrific social and political commentary along the way. At the start of season three – premiering Wednesday, April 11 on Syfy in the US, and available for purchase elsewhere – that war has arrived for better and worse.

Better because unlike previous seasons, where the show tended to drag its feet at times and felt like it was following one thread too many, The Expanse's third season – Syfy has given critics early access to just two out of 13 episodes – has a lot of forward momentum thanks to a narrower, more cohesive approach: there are only three primary interconnected narratives, and even those are converging towards each other. The planets (and asteroids) may be millions of miles apart, but they're all now united by war, just as it says on the show's poster for the season.

And worse because all the primary characters are in great peril. The Expanse season 3 picks up right where season 2 left off, with the high-ranking United Nations official Chrisjen Avasarala (Shohreh Aghdashloo), Martian marine 'Bobbie' Draper (Frankie Adams), and Cotyar (Nick E. Tarabay) still stuck aboard the ship owned by unethical businessman Jules-Pierre Mao (François Chau), who was ordered to kill all of them by UN's second-most powerful individual, the warmongering and manipulative Sadavir Errinwright (Shawn Doyle). 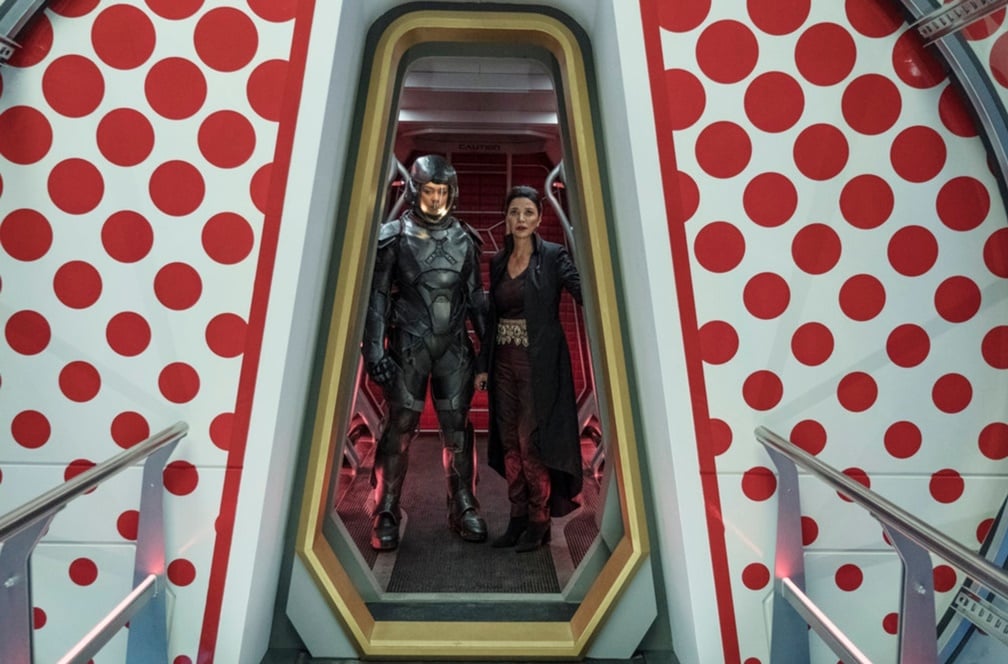 Back on Earth, Errinwright manages to sway his boss, the Secretary-General Esteban Sorrento-Gillis (Jonathan Whittaker), through a mix of rhetoric and fear to declare war on Mars, while spinning tales about Chrisjen and Mao to move them out of the picture. To help sell the war to the public at large – who are against it for they already have guaranteed basic income, open skies and free drugs – Sorrento-Gillis ropes in an old friend, Reverend Dr. Anna Volovodov (Elizabeth Mitchell, from Lost), a new addition to the cast, to craft his speeches in return for UN funds for her charity work on Jupiter's moon, Europa.

That leaves the crew of the Rocinante – Earther captain James Holden (Steven Strait), Belter engineer Naomi Nagata (Dominique Tipper), the Martian pilot Alex Kamal (Cas Anvar), the Earther mechanic Amos Burton (Wes Chatham), and their new companion late into the last season, the Ganymedian botanist Prax Meng (Terry Chen) – who having gotten rid of their last, big problem (the protomolecule monster) now find themselves right in the middle of a warzone. That means having to change their ship name, while dealing with the ramifications of Naomi's big decision: handing control of the protomolecule she hid to the leader of the Outer Planets Alliance (OPA), Fred Johnson (Chad L. Coleman).

Johnson and his second-in-command Drummer (Cara Gee) barely feature in the first two episodes – like last season, creators Mark Fergus and Hawk Ostby have written the premiere, with joint authors Abraham and Franck handling the second, and Breck Eisner (The Last Witch Hunter) in the director's seat for both – though they should become more prominent as the season progresses given the importance of the protomolecule, and the events in the books. The third season of The Expanse will cover the remaining half of Caliban's War, and centre on Abbadon's Gate. Their absence from the action early on is necessary to allow for a high-octane start, one that's consistent with how The Expanse operates: pull audiences into the season by delivering something engaging upfront, and then settle down into a slower routine that provides time for character work, themes, and the multiple allegories. Of course, season 3 could be different in that sense since an all-out war between Earth and Mars is not on the horizon any longer. The Expanse can't afford to be action-heavy because it operates on a limited cable TV budget, and it's going to need those funds to scale up the action as everyone amasses their forces.

But since the war is very much in its infancy for now, the beginning of the new season benefits by keeping it intimate. There's ample time for character moments to register, be it black-humour banter between Chrisjen and her friend-bodyguard Cotyar, Draper making Terminator references, Alex delivering a heartfelt message to his family, or Prax passionately talking about his admiration for pine trees (or rather pinus contorta, since he's a botanist). Hopefully, The Expanse will be able to keep this up as it ventures into the season, and the show's focus naturally expands.

Veteran actor David Strathairn, an Oscar nominee for Good Night, and Good Luck and also known for his role in The Bourne Ultimatum, is the other big addition to the cast for the third season, and will be part of that expansion. There's no official word on whom he'll play, but most fans on Reddit think it'll be Captain Ashford, who has an important role working for Johnson, given what we know of him from the books. That goes for Mitchell's character as well. 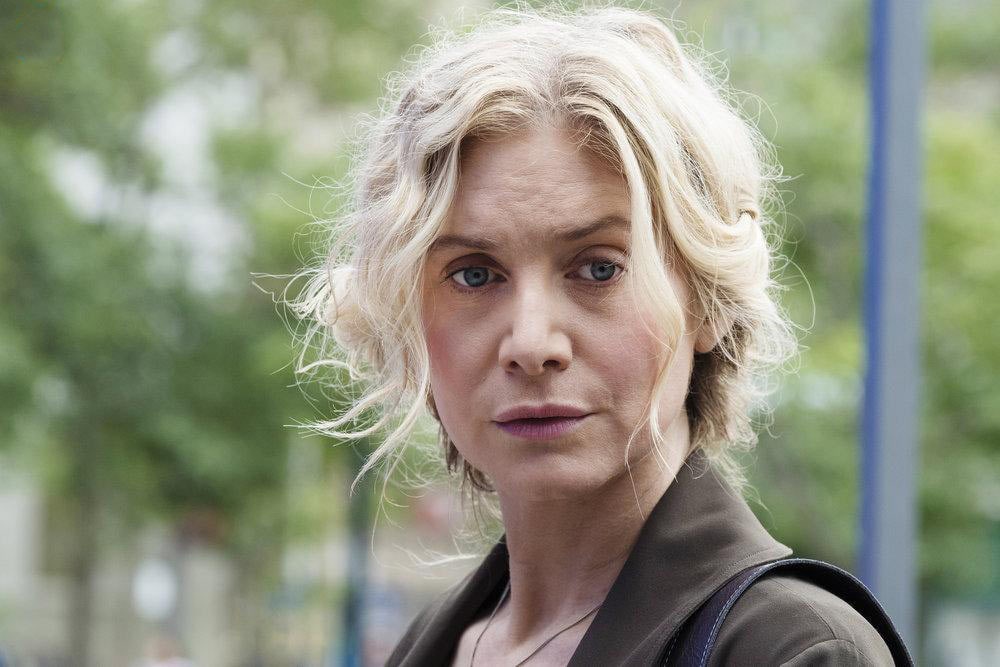 Reverend Volovodov's Methodist background adds an interesting facet to Earth's war-room discussions – when Sorrento-Gillis and Errinwright remark they are not averse to using Mao's children to lure him out, Volovodov points out they've had a whole new testament since "visiting the sins of a father on the children" was considered okay – while serving to further cement the fact that the scheming of the people at the top causes most trouble for those with the least means for survival. And as the biggest powers vie for more powerful weapons, in this case unlocking the protomolecule's secrets, it will only lead to more horror, terror, and loss of life.

That's exactly what happened to the Arboghast and its crew at the end of season two, who remain in the suspended-animation sort of state with the ship entirely dismantled, hanging over Venus. It's too early to say how the show will handle the war at its doorstep, and whether it'll effectively build on the related themes, but The Expanse season three does offer a promising start with thrills.

New episodes of The Expanse season 3 air Wednesday on Syfy in the US, and are available for purchase via Amazon Video, Google Play, iTunes, and Microsoft Store. The first two seasons are available on Netflix in India, and season 3 will be available after it ends.

Affiliate links may be automatically generated - see our ethics statement for details.
product Premiering April 11, season 3 of The Expanse has a lot of forward momentum thanks to a narrower, more cohesive approach. Elizabeth Mitchell and David Strathairn are new to the cast.
Comments

Further reading: The Expanse, Syfy
Akhil Arora Email Akhil Akhil identifies himself as a stickler for detail and accuracy, and strongly believes that robots will one day take over most human jobs. In his free time, you will find Akhil beating the computer at EA Sports FIFA or streaming new highly-rated TV series. More
Mark Zuckerberg Says Facebook Is Committed to Integrity of Elections in India
Google Chrome, Mozilla Firefox to Support New Standard for Password-Free Logins

The Expanse Is More Sure of Itself in Season 3
Comment