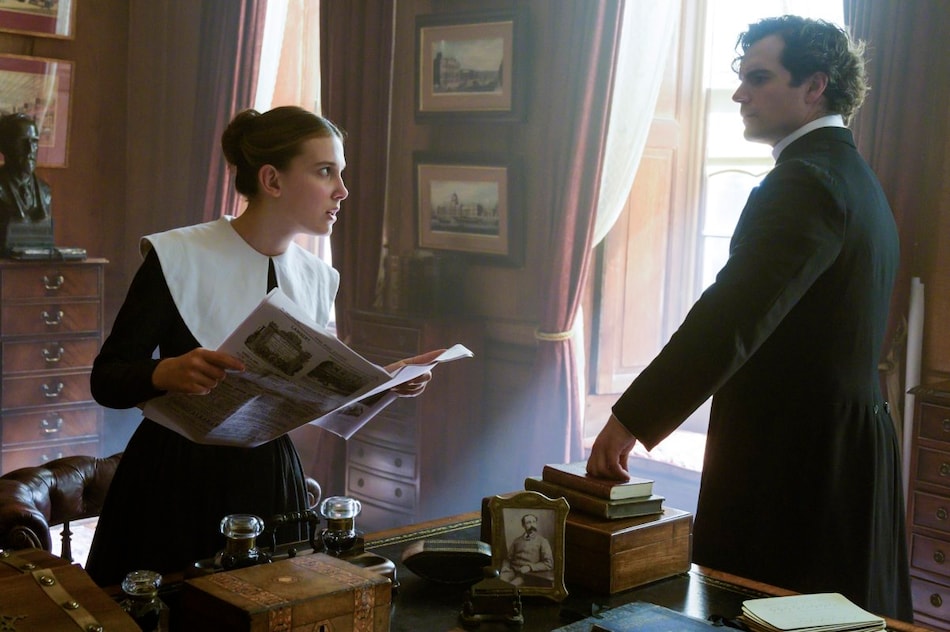 The concept of the new Netflix original Enola Holmes sounds like the Hollywood machine in overdrive: what if Sherlock Holmes had an equally-smart teenage sister? But it's in fact based on the eponymous best-selling young-adult book series (published between 2006 and 2010) from American author Nancy Springer. And its Netflix adaptation — made by an all-British cast and crew, as is fitting the setting — is a jolly, family-friendly outing, though it's not particularly ambitious. Its convoluted plot doesn't have the intrigue of a story befitting the Holmes moniker. Instead of showcasing its titular heroine's deductive reasoning powers, Enola Holmes seems more interested in her physical abilities. In doing so, it becomes more Robert Downey Jr. Sherlock Holmes than Benedict Cumberbatch Sherlock.

It's a shame if that's because the Enola Holmes creators — Harry Bradbeer (Fleabag, Killing Eve) directs off a script by Jack Thorne (His Dark Materials, Harry Potter and the Cursed Child) — don't think the film's target audience would be able to keep up. But dumbing down all the puzzles into anagrams isn't the only example of this problem. Enola Holmes also has a habit of hammering home the same point over and over, including something as basic as that Enola spelt backwards reads “alone”, and making use of quick flashbacks to remind us of events and information that was conveyed less than half an hour ago. Enola Holmes feels like a film built for the TikTok generation, who can't lift their heads from their phones long enough to follow a two-hour movie.

Where the Netflix film partly redeems itself is in its themes. By virtue of its setting (late 19th-century England) and its protagonist (a knowledgeable teenage girl), Enola Holmes is of course a feminist story. It further adds to that from several angles: a reform bill, middle-aged men trying to uphold status quo, the women's militant suffragette movement, patriarchal finishing schools for girls, and Enola's equal-rights-champion mother Eudoria Holmes (Helena Bonham Carter).

There's talk about England's glory, preserving what life is like, and not asking “What could be?”. Through its female characters, Enola Holmes delivers a somewhat on-the-nose lesson that those who are apolitical can only afford to do so because the world is designed for them. It's a clear shot aimed at today's centrists and the ones sitting on the fence as the world burns. And the film seeks to empower its young viewers, reminding them that the “future is up to us”.

From The Boys to Enola Holmes, What to Watch in September

Enola Holmes opens with bursts of exposition, delivered by the titular character (Millie Bobby Brown) with a heavy sprinkling of fourth wall breaks. The last bit (speaking to camera) is what you'd expect from an Emmy-winning director who has worked on Fleabag, where creator and star Phoebe Waller-Bridge is known for doing as much. Enola explains that she shared a seemingly perfect life with her mother (Carter) after their dad died and her much elder brothers — Sherlock (Henry Cavill) and Mycroft (Sam Claflin) — went away. Her mother was her whole world, Enola summarises. All that fell apart on her sixteenth birthday when Enola woke up to find that her mother had left her without a reason.

With no adult left to supervise her, Enola's brothers make a rare trip back home. Not only do they fail to recognise her at first due to her dishevelled look, the upright Mycroft — this version of the eldest Holmes sibling isn't as smart, is jealous of Sherlock and Enola's brain power, and is more concerned with the image of the Holmes family — promptly decides to pack off Enola to a finishing school, to be educated into a young lady. But he doesn't mean the education you're thinking of. When Enola says she has no need of a husband, Mycroft (who scoffs at feminism) says that needs to be “educated out of you”. With her mother gone, Enola is now Mycroft's ward and she must do as he says, what with Sherlock (who is more understanding) reluctant to make a stand.

Except Enola has been brought up to think for herself. Realising that words won't change the future determined by her brothers, Enola decides to sneak out and head off to London, hoping to find her mother in the big city. Not having enough plot to propel the story, Enola Holmes brings in a side plot involving a helpless boy of Enola's age, a lord whose mouthful full name, Viscount Tewksbury, Marquess of Basilwether (Louis Partridge), is repeated in full each and every time. Tewksbury is also on the run, like Enola, and the Netflix film sets him up as a future love interest. Enola Holmes swings between the two narrative threads — the missing mother and the marquess case — hoping to tie them together, but it's not able to organically pay off each other in satisfying ways.

Aquaman, Enola Holmes, and More on Netflix in September

It doesn't help that it underuses its primary adult characters. Sherlock's presence in Enola Holmes is limited to brotherly support on a couple of occasions, though the second time is also a ruse to help himself. After all, for Sherlock, their mother's disappearance is another mystery to be solved. Enola doesn't want a mystery; she just wants her life back. Sherlock puts Enola on the path to become a detective in her own right, but Cavill doesn't get enough to do in the role. More importantly, the mother Eudoria largely exists in those quick flashbacks where she's stuck delivering platitudes. Carter is marginalised from the film as a result, and rarely gets a proper scene opposite Brown where she emerges as a fully-realised character.

Enola Holmes rightly belongs to its lead, with the 16-year-old Stranger Things star — as old as the character she is playing — sprightly, full of charm and panache, carrying the film on her young shoulders. Crucially, Brown delivers in another coming-of-age role that demands something very different than her first Netflix venture. However, it could have imbued her with more layers and allowed her to be more complex. The same can be said of Enola Holmes, especially of the saggy middle section, but thanks to its exuberant teenager, the Netflix film manages to do just enough to serve as a series starter. Enola Holmes draws off Springer's first book from 2006, “The Case of the Missing Marquess”, and there are five more waiting in the wings.

They might not première on Netflix though. Warner Bros. had theatrical plans for Enola Holmes but ended up going straight to streaming due to the pandemic. For now, a new game is afoot.

Enola Holmes is out September 23 on Netflix in India and elsewhere.