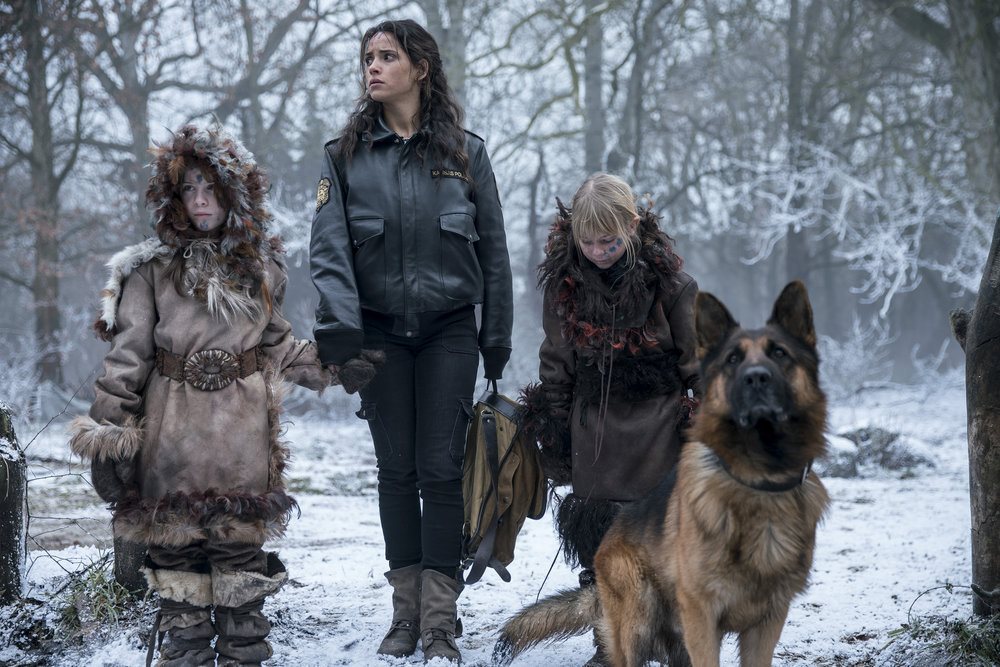 Early on in the new adaptation of L. Frank Baum’s The Wizard of Oz titled Emerald City, our protagonist Dorothy (Adria Arjona) is shown to be a young nurse who’s always ready to help people in her home town of Lucas, Kansas, which has a population of just 393 people. Apart from a mysterious tattoo on her hand and a mother who gave her up at birth, there isn’t much drama in her life. But all of that is about to change, as anyone who’s ever seen, read, or heard the tales of Oz well and truly knows.

Dorothy’s arrival in the Land of Oz takes place just as it was in the source material, by way of a tornado. Only this time she is transported from the 21st-century in a police car with a K-9 German Shepherd for company, into a cold, snowy inhospitable place unlike the cheery, Technicolor version of the famous 1939 musical film starring Judy Garland. Her grim entrance is made starker by her accidentally hitting a red-robed woman (Florence Kasumba) with the car, and the munchkins who greet her aren’t singing either, and instead reflect the environment and setting the show’s aiming for.

At the munchkin village - which looks like a tribal outpost - Dorothy confesses to her actions, she is tortured and branded a witch by the people. Eventually, they vote to exile her from their lands, and she is taken by the only English-speaker among them to the border. The action then shifts to the show’s titular focus – Emerald City – a city full of gleaming structures, bathed in sunlight, and flying monkeys as drones, that can also serve as film projectors. It’s here we meet the Wizard (Vincent D'Onofrio) himself, who we are told helped save everyone from the great evil, the comically-named The Beast Forever.

To do so, he called on mighty warriors, whose stone effigies now dot the Oz landscape. After the war, he also outlawed the witches from using their magic. The opening in the sky – the tornado – amid news of The Witch of the East’s death (the red-robed woman) has reignited fears that the Beast will return. Meanwhile, the other two living witches – the Witch of the West (Ana Ularu), and Glinda of the North (Joely Richardson) – seem to be conspiring to return themselves to power.

From its dark take on the fantastical landscapes, the dour-faced characters either surviving or scheming, and the talk of mysteries that are now considered folk tales, there is an obvious attempt by the creators of Emerald City – Matthew Arnold (Siberia) as developer, and Tarsem Singh (Mirror Mirror) as director for all 10 episodes of the first season – to evoke the feeling that draws so many towards the fantasy-epic mainstay of our time, HBO’s Game of Thrones.

The Witch of the West gets an introduction climaxing on top of a fully-oiled man, and her new trade is owning a brothel. There are elaborate routines of introducing characters before they enter throne rooms. (At least it serves as fodder for a joke.) And the show sprinkles a hefty amount of violence and eccentric happenings to keep the audience on their seat edges. This mixture of war and sex forms part of a new TV style – one that’s been adopted by the likes of Vikings, Marco Polo, and Westworld to varying degrees of success.

Emerald City is NBC’s attempt at its own Thrones-style epic, dressing the children’s tale of Oz in a darker, adult-oriented setup. But it fails to light up in that manner. The problems aren’t certainly with the visuals, even if sometimes they have a B-grade feel to them. That says more about the rest of the show than it does of the imagery.

Arjona delivers a one-note performance as Dorothy, and is unable to showcase the range of emotions that is needed even in the first two hours. D’Onofrio seems to be missing the spark that he brought to Marvel’s Daredevil as the Kingpin in the show’s first season, and the huge beard wig he’s given to wear doesn’t help his cause. Ularu’s crazy wicked portrayal of the high-on-opium witch is enticing to watch, and her sister – Richardson’s Glinda – attempts to radiate a half-baked Galadriel from Lord of the Rings.

Even while Emerald City brings up new ways of introducing its support cast – the scarecrow is now a man with tight abs named Lucas (Oliver Jackson-Cohen) whom Dorothy finds affixed on a crucifix, and the dog isn’t named Toto, but rather that's the word for ‘dog’ in the local language of Ozians – it ultimately fails to make us connect with these characters, and give us someone to root for. The show’s bright light is instead a boy named Tip – introduced in the first book sequel by Baum – through whom the writers explore a gender identity narrative.

Beyond that, Emerald City tends to be forgettable, slow-moving, and uninspiring with both cast and storylines. In recent times, Hollywood too often confuses serious, plot-driven, and epic-scope drama as the means to an end, overlooking the fact that it’s always more about the people involved.

Part of its issues can be attributed to the show’s troubling path to development, which involved network NBC cancelling production in 2014 before reversing course the year later. Those decisions even meant a change of showrunner, with David Schulner (Desperate Housewives) replacing Josh Friedman (Terminator: The Sarah Connor Chronicles). NBC clearly saw some potential in this new modern take on an old tale, but its opening two hours are proof that it could have done with more heart à la Dorothy, and less of the grittiness that’s taken over prestige television.

Emerald City airs in the US on NBC, Fridays 9pm, and in India on Colors Infinity, Saturdays 8pm.