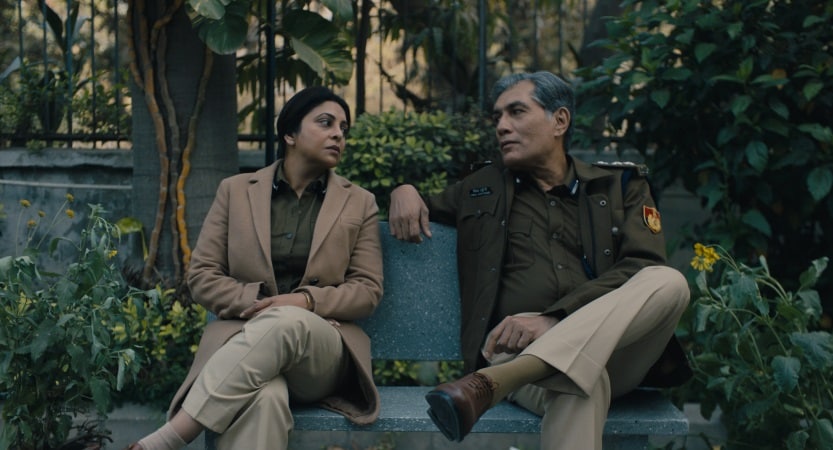 Given the widespread international attention to and local impact of the Nirbhaya case, in which a young woman was gang raped and brutally assaulted by six men in Delhi in late 2012, it's curious that there hasn't been a single mainstream effort by Indian producers to recount the tragedy, the indelible effect it left on the Indian consciousness, and its importance in the social and political spheres of the country.

The BBC documentary in 2015, India's Daughter, that made waves remains the most high-profile account, aside from a 2013 indie Bengali film, Nirbhoya, and Deepa Mehta's 2016 film, Anatomy of Violence, which have explored the larger maladies surrounding it.

Netflix's new police procedural anthology series — Delhi Crime, out now — comes closest, being a joint production of Mumbai-based, digital-focused Golden Karavan, and Crazy Rich Asians-helmer Ivanhoe Pictures. It has been created, written and directed by Indo-Canadian filmmaker Richie Mehta, best known for indie entries Amal and Siddharth, who developed Delhi Crime with the help of British producer-writers Laurence Bowen (My Life as a Popat) and Toby Bruce. Neeraj Kumar, Delhi's then-Commissioner of Police, served as a story consultant on Delhi Crime, and Mehta has thanked Chhaya Sharma, the then-DCP of South Delhi, after whom the show's protagonist is modelled.

The seven-episode first season of Delhi Crime — it has been renewed for a second — offers a fictionalised look at the police investigation, based on case files, chronicling the six days from the day of the incident: December 16-21, 2012. That time constraint naturally brings a sense of urgency to the series. With each episode covering a day's events or less, it gives Delhi Crime the immediacy of something like the Kiefer Sutherland-starrer series 24, showcasing how the Delhi Police responded in a swift manner and nabbed all six suspects in less than a week. That is in stark contrast to the police's public image in India, and in some ways, it's comforting and empowering to see a force that seems to be both willing and competent.

Of course, the Nirbhaya case was an exception in terms of prosecution of rape cases. In reality, most rape survivors in India face a series of problems, from faults on the forensic and police investigation fronts, some of it brought on by budget shortfalls, which then contributes into a weak prosecution argument. It doesn't help that the judicial system is falling behind — the Nirbhaya case resulted in new stricter laws and fast-track courts, but the victim's father maintains that enough hasn't been done — which drags cases for years, during which victims and witnesses routinely drop out.

Despite its limited scope, Delhi Crime touches upon some of that, for what a show told from the perspective of the Delhi Police can. The show gets right into it, from the moment the first responders of the law arrive on the scene, before jumping back earlier in the day to set up its ensemble. The makers have changed everyone's names. There's Vartika Chaturvedi (Shefali Shah, from Dil Dhadakne Do), the DCP of South District, who hails from an upper middle-class family. Chaturvedi is hard-working, stringent and humane, the kind you want every cop to be. She believes that there's hope for India's capital city and it's getting better, plus she has a point to prove to her daughter Chandni (Yashaswini Dayama, from Dear Zindagi and Adulting), who has heart set on leaving Delhi for Toronto.

Chaturvedi's most trusted aide is the head of a Special Task Force, Bhupendra Singh (Rajesh Tailang, from Siddharth, reuniting with Mehta), who is both adept and unapologetic, and whose work ethic has put a strain on his back, in addition to his vain attempts to find a groom for his daughter. Chaturvedi ropes in an IPS officer in-training called Neeti Singh (Rasika Dugal, from Manto) to be with the victim's family, who has moved from Chandigarh to Delhi to be independent, but her parents are forcing her to get married. The investigating team also includes several station heads and sub-inspectors that make up the ensemble, alongside the Commissioner of Police and the Delhi Chief Minister, who have small roles as the season goes on.

When Delhi Crime first introduces a new police character, it not only displays their name and rank in the force, but also lists their years of service, which serves as an indication of the combined experience that went out into solving the Nirbhaya case. It's Chaturvedi's personal interest in the case — midway through the season, a magistrate jokes that DCPs generally play golf and drink champagne — that allows her to form a team of this order, which set out to find the six suspects with little to go on. While the first few episodes of Delhi Crime are mainly focused on the search, the other subplots involving the political angles and Chandni joining protests are hinted at and start to filter in more as the season progresses.

The Netflix series benefits from a combination of good acting, direction and scripting. Both Shah and Tailang are great in their respective roles, carrying a mixture of duty, rage and relentlessness that propels Delhi Crime. It's more of a showcase for Shah, of course, who by far has the most screen time of any. And though Dugal doesn't get enough to do here, she — much like many of the supporting Delhi Police cast, including Gaurav Rana, Gopal Datt Tiwari (Pitchers), and Anurag Arora (Dangal) — are relatable and believable, which matters. Mridul Sharma, a newcomer who plays one of the six rapists, Jai Singh, impresses as well in a scene from an early episode, as you can feel your blood curdling as he brags about what they did to the victim and justifies his actions with his warped logic.

Some of that is down to Mehta, who knows how to build moments with his direction. That is especially true of a wordless scene in the finale. At other times, he benefits from the work of music composer Andrew Lockington (San Andreas), whose scores delivers a sense of permanent uneasiness. The show's pacing is good for the most part as well, though Delhi Crime loses some of its forward momentum towards the end of the season, likely because it's trying to set the table for the season finale. And there are a few moments scattered across that could have used a softer touch and been less dramatic.

More importantly, Mehta understands that a case of this nature could suffocate a show with its bleakness. It's why he finds moments in Delhi Crime that make space for a bit of humour, which allows for a release of tension through its character exchanges. Most of it is driven by the ineptitude of the police, the culprits, and those around them. In an early episode, Bhupendra makes easy work of two suspects who are amateur liars, while he and Chaturvedi rebuke the police's in-house cyber expert as he tries to complain about his working hours in the face of a ghastly crime. And in a different scene, when a character tries to plead innocence over bloody clothes, claiming he thought the blood belonged to a cow, the cops berate him: “Let's go to the station, the cow is pressing charges.”

Then, there are times when Delhi Crime is unintentionally hilarious, owing to dubious technical and medical claims. Midway through the second episode, an officer suggests he can zoom into a CCTV still with his phone camera. Chaturvedi naturally points out that you can't zoom into the original image. But the show then doubles down on its offer as said officer clicks a photo of a screen and magically delivers more detail. We figured it was mocking a prevalent issue in detective shows, but Delhi Crime went ahead and made things worse. In a later episode, a police station head suggests using bite marks as evidence against the culprits, claiming he's seen it on “American shows”. Bite mark analysis is an inexact science, though the show might be justified in showing it as the problematic aspects of police investigations.

If that is indeed supposed to be commentary, it is delivered terribly. Unless viewers are already aware of the facts, Delhi Crime perpetuates the culture of acknowledging bite mark analysis as forensic science. Thankfully, the show is much better in most other regards, from its tackling of police brutality, the political and judicial problems faced by those in uniform, and the day-to-day budgetary concerns.

Alongside, it also briefly touches upon the societal causes in India that breed violence and misogyny, from income inequality to the lack of sexual education. Delhi Crime also attempts to address concerns about the police, from how they dissuade victims from not lodging FIRs in the first place to how long it takes them to carry out basic necessary procedures that put lives at stake, but it only grazes them in passing though.

On the whole though, Delhi Crime does a commendable job of showcasing the extremes of India's capital city — the worst and the best — from the heinous crimes committed by the six individuals to the police officers working tirelessly to apprehend the suspects, sacrificing their personal lives in the process. And it all ends with a quietly devastating moment in the final episode, as Chaturvedi brings up a similar incident from the past, except that it all went under the radar. That paints a scathing picture of India as it signifies the omnipresent nature of sexual violence, and that the Nirbhaya case was simply different for the attention it garnered. And it says a lot more about our society that local producers and filmmakers have kept their distance.

Delhi Crime is out now on Netflix worldwide.

Holi 2019: 5 Apps That Will Add More Colour to Your Holi Memories
Delhi Crime: Shefali Shah, Richie Mehta on That Big Table-Setting Scene in the First Episode