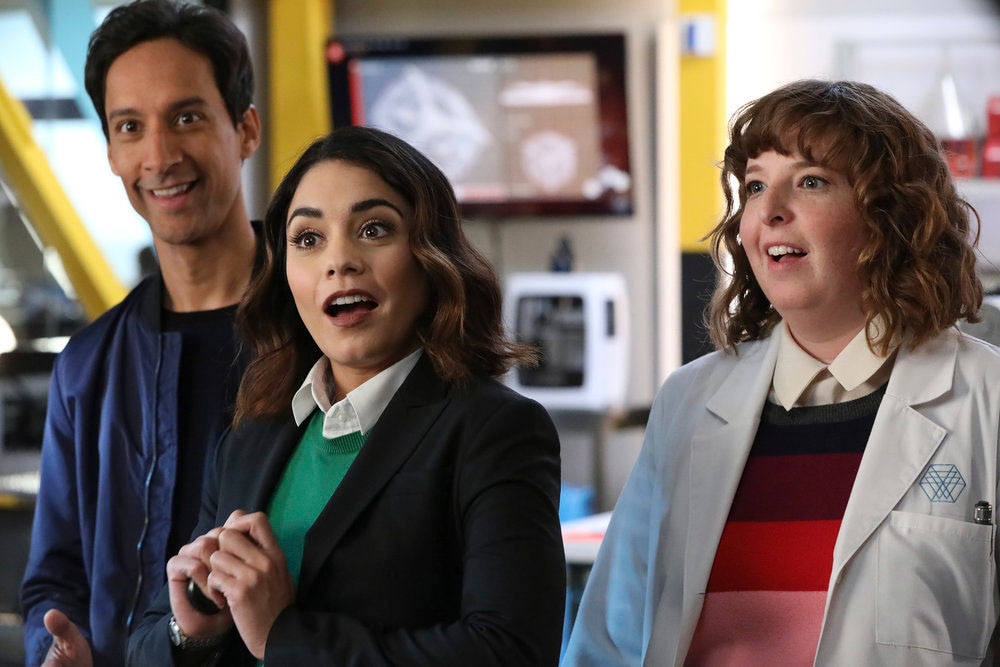 Danny Pudi, Vanessa Hudgens, and Jennie Pierson in a still from NBC's Powerless

A few minutes into NBC’s new show, Powerless, set in a world full of superheroes, two Z-list DC Comics characters – villainous fire-throwing Jack O'Lantern and the agile Crimson Fox, who has superhuman strength – engage in a fight that leads to collateral damage, mainly in derailing a passing metro coach. Vanessa Hudgens, playing a confident young woman called Emily Locke, is on that train, on her way to a new job at Wayne Security. As the train takes off the tracks, the frame freezes and Emily breaks the fourth wall to remark: “I know what you're thinking, yet another superhero battle.”

But this isn’t one of them. Powerless is the first sitcom from DC, and its focus aren’t the people flying around wearing capes and saving the world – instead, it’s the ordinary civilians. The show introduces this premise by way of a wonderful opening credits sequence, modelled right after the comic book pages from the 70s. As it shows the likes of Superman, Batman, and The Flash saving people, the camera zooms past them to focus on scared and terrified passers-by, who are the protagonists of Powerless, hiding behind lamp-posts, or hanging from buildings, all fearing for their lives.

Emily is one of them, and she is quick to note that she had an uneventful childhood growing up in a “flyover state”, a phrase which here denotes a place that superheroes never stop at, and only fly over. As an adult too, her life feels “unfulfilled”, that is until she gets to work for Bruce Wayne. Or, as her co-worker and assistant to the boss Jackie (Christina Kirk) puts it – Bruce Wayne’s much less charismatic cousin, Van Wayne (Alan Tudyk), who actually runs the division. It’s also not located in Gotham City but its dud of a neighbour, Charm City, a place hated by the people that inhabit it.

All of that doesn’t seem to perturb Emily though – her admiration of Wayne (Bruce, not Van) displays itself in a book she’s heavily annotated and marked with sticky notes, called ‘Wayne or Lose: How to Succeed in Business’, supposedly written by Bruce Wayne himself. The words within are like dictum for her; she quotes them verbatim when she’s feeling down, and feels deeply about her coding system – of underlining, circling, or starring. So much so that when Jackie starts to ruffle through the pages, and ends up confused, Emily is happy to explain that "a star is greater than a circle, but less than a heart," while giving her a that-was-obvious face.

Emily is also a people’s person, in her own words and those who have previously worked with her. That’s why Van has brought her in as Director of Research and Development, in the hopes to revive the struggling division, and create a product that will impress his cousin. For Van, it’s a way to get himself out of Charm City, and into the glitzy embrace of Gotham. Viewers who have seen Gotham regularly torn apart on the big screen may not agree with that assessment.

Filling up the cast around Hudgens’ Emily are Danny Pudi as Teddy, an office prankster who’s still carrying over the eccentric style to his personality from Community; lead software engineer Wendy (Jennie Pierson), who does not take a liking to Emily; and Ron (Ron Funches), who’s got a child-like enthusiasm for all superhero-related stuff. The team has seen some terrible days, and they are wary of getting another boss who is going to give them “pep talks” and leave soon after. You see, in his Gotham pursuit, Van has fired four R&D directors already. But even though her new colleagues aren’t interested in following her motto – “let’s be better” – because they realise the futility of such action, Emily isn’t afraid of taking on moon shots.

Hudgens’ sense of wonder and general excitement at things around her is not only a natural draw for the show, but also serves as contrast to play up the comedic events around her. Before the incident with the train, Emily had never observed super beings up close. But the citizens of Charm City have grown so accustomed to the consequences of living alongside superheroes and supervillains that they don't even stand up at their notice. For them, it’s just another inconvenience, like traffic is for cars.

After Crimson Fox saves the coach, a giddy Emily rhetorically remarks: “You don't see that every day.” But a fellow commuter is quick to point out: “Actually, you do. You see that every day.” It goes to show how tiring and full of hassles it must be having to deal with the regular destruction, and also acts as a jab at how there are too many superhero films being made every year. Powerless isn't afraid to take digs at the holes in its big screen counterparts, as when Van once says "superhumans fighting one another for vaguely defined reasons", referring to the pointless duel between Batman and Superman in last year’s Zack Snyder-directed venture, or possibly the rivals, Marvel’s Captain America: Civil War, which split the Avengers into two factions. The show even goes to the extent of riffing on classic quotes from those universes, which adds another layer for anyone even remotely aware of the existence of superhero culture.

Ultimately though, Powerless is set in that world for a reason, as it allows it to namedrop characters that people know too well already. Bruce Wayne appears through text messages and phone calls, though his voice is never heard. The former shows that BvS’ overly-cynical Bruce Wayne has a softer side too, who tells Van to stop using his HBO Go password, and reacts to the idea of hiring Emily as “sounds good”. Executive producer Patrick Schumacker has said that Batman will appear “in a very small way”, and Powerless will be better served to keep it that way – the bigger names can take away the limelight far too easily.

Later in the first episode, when the team at Wayne Security show off a new invention – a suit that blows up on impact to protect its wearer – Emily is ecstatic and full of praise. It doesn’t last long, though. Teddy points out that it’s actually made by LexCorp, a chief rival. “We're trying to figure out how it works, so we can make a cheap knock-off,” he adds. Another time, Ron comes up with a window pane made of Kryptonite to protect people inside glass buildings from Superman, but the problems are obvious when Emily wonders what happens if the people need help. The jabs at their own incompetence also paints them as the underdogs, which naturally makes them more relatable.

But the laughs are never of a higher order, or even the continuous rolling nature. In the comedy department, Powerless’ first episode can feel just like its title, but it does bring some much needed respite to the tired, dark and serious superhero world, by infusing a light-hearted take on those events – be it the annoyance on people’s faces as opposed to wonderment, or bewilderment in how a gadget made for Wayne Security lands up in the hands of Batman. So even though the new show sets itself up as an outlier from other comic book adaptations, it will undoubtedly be best enjoyed by those already in love with the material.

Powerless premières on NBC in the US Friday, February 2 at 8:30pm EST. You can also catch it via the NBC app in other territories by using a VPN service.