Captain Marvel Review: Brie Larson–Starrer Is No Match for Wonder Woman, and That’s a Shame

With Captain Marvel, the home of the Avengers has put a huge target on its back. It must prove itself as the first solo Marvel film centred on a female superhero lest it become an excuse for (male) executives to not greenlight more women-led adventures. For what it's worth, though, the preceding chapter — Ant-Man and the Wasp — already gave us a female superhero in the title. And having taken so long — nearly 11 years and 20 previous films in the unstoppable Marvel Cinematic Universe — it must also contend with the impressive shadow that sprung from the critical and commercial success of rival DC Comics' first solo female chapter, Wonder Woman, which is still the sole redeeming gem of Warner Bros.' attempt to copy the Marvel Studios model.

And at the same time, Captain Marvel — from the directing duo of Anna Boden and Ryan Fleck (Half Nelson, Sugar), off a script by Boden, Fleck, and Geneva Robertson-Dworet (Tomb Raider) — also has to justify the character's introduction to the Marvel world and roster of (half-erased) heroes at its most delicate moment. It is sandwiched between the fallout of Infinity War and the endless what-ifs surrounding Endgame, which will undoubtedly disappoint many no matter how it overturns the ghastly consequences of its predecessor. This isn't simply a nature of Marvel's release strategy, but also how its hero is placed in the continuity: Captain Marvel was deliberately set up as the hope for all kind in the only post-credits scene in Infinity War.

It's almost impossible for any superhero film to live up to those demands, especially one that makes the curious choices that Captain Marvel does. For one, the title character — played by Brie Larson, Oscar-winner on Room — doesn't even know her real name let alone who she is, owing to the onset of amnesia brought on by a traumatic incident. In an earlier life, the protagonist was a secret fighter test pilot named Carol Danvers, alongside her best friend Maria Rambeau (Lashana Lynch, from Still Star-Crossed), at a time when women weren't officially allowed to fly.

And because that past is crucial to her story, the film ends up being an origin story while not wanting to be one. It does its best to disguise that, by adapting a non-linear narrative that allows selective memories to filter though, but that also means Larson is mostly stuck playing a character that feels like a bit of a blank slate. Maybe Captain Marvel would have been better off using traditional flashbacks, where the film intercuts between the past and the present, instead of trying to organically fold them into the plot. That's because the life that she has forgotten and has to be reminded of by people around her, sounds terrific and worth a revisit. Infinitely more so for what it conveys, that women can be whatever they want to be.

Instead, the film opens with Danvers living on Hala, the home planet of the alien Kree civilisation, who were portrayed as the villains in Guardians of the Galaxy. Just like the audience, she doesn't know how she got there and why she's dreaming of a person (Annette Bening, from American Beauty) she seemingly doesn't know. All she does know, which she has been told by her mentor-trainer-commander Yon-Rogg (Jude Law), is that she serves the Kree, a race of supposed noble warriors — sorry, ‘noble warrior heroes' — that has long been at war with the Skrulls, a race of alien shapeshifters led by Talos (Ben Mendelsohn, from Rogue One).

Danvers is also part of an elite Kree military unit called Starforce, which is run by Yon-Rogg and includes returning Guardians of the Galaxy star Korath (Djimon Hounsou) alongside three other forgettable additions. They routinely work together in partnership with that Guardians of the Galaxy evil Ronan (Lee Pace) and his band of Accusers, whose single mode of operation is to bomb everything in sight. On a classified assignment to a Kree border planet, the Starforce is ambushed by the Skrulls and Danvers is taken hostage. After realising that the Skrulls are playing with her memories, she frees herself and escapes, only to crash land on the planet below that turns out to be our own: Earth, circa 1995. 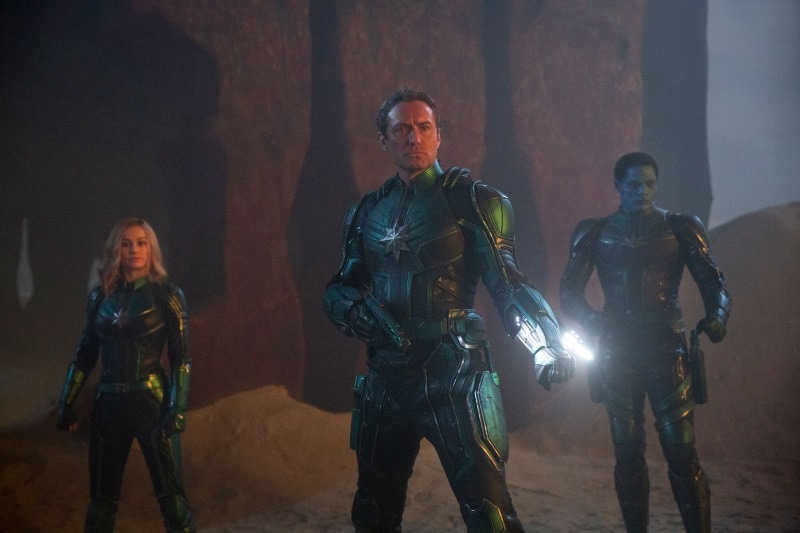 And of course, out of everything on a planet made up of about 70 percent water, Danvers crashes into suburban US state of California, because the filmmakers need her to. There, she has a cosmic meeting with the digitally de-aged versions of Nick Fury (Samuel L. Jackson) and Phil Coulson (Clark Gregg), who are much lower in the S.H.I.E.L.D. pecking order, naturally. If you think too much about the de-aging VFX, you might not be able to focus on anything else. But if you forget about it for a second, as we did, the effect doesn't particularly call any attention to itself. (What does call attention to itself is the Indian censor board's blurring of alcohol brands in a bar.) After a chase sequence involving a train, Danvers and Fury join hands, and begin to dig into her memories.

The banter and chemistry between Larson and Jackson are some of the best parts of Captain Marvel. It feels like a buddy-cop subplot bolstered by a charming young-Fury performance from the latter and an easy-going Larson, who unfortunately only has glimpses of Danvers' personality to work with, which is a mix of Tony Stark and Doctor Strange's self-confidence and the quirky relatability of Peter Parker and Star-Lord. Yon-Rogg keeps telling her that emotions are a warrior's biggest weakness, but Danvers is at her best when she's letting said emotions seep through. He also asks her to not go overboard with the immense power she possesses, but it's when she does exactly the opposite that Captain Marvel is a giddy delight. When she enters ‘God Mode' during the third act, you wonder if she might take on Thanos by herself.

Danvers' ability to kick ass, and the effortless way she goes by it, helps distract from how generically crafted and choppily edited the action sequences otherwise are. There is also a lone winning moment for Rambeau, though the film could have set it up better. Captain Marvel is somewhat reminiscent of Thor: Ragnarok in that sense, and it's also similar in that the action is played for humour, the highlight of which is a subversive moment that upends the big hero-vs-villain fight towards the end. It's the comic elements that help elsewhere too, be it the fascinating scene-stealer cat named Goose, or 90s' things like dial-up Internet and super slow CD-ROM drives, in addition to the terrific acting work of Mendelsohn. 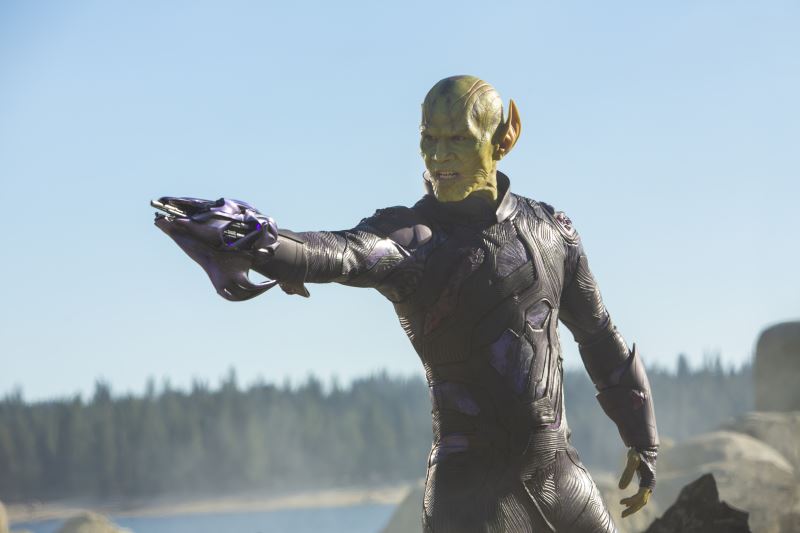 While Marvel's villains and anti-heroes tend to be two-dimensional, Mendelsohn — who has previously worked with Boden and Fleck on 2015's Mississippi Grind — is excellent as Talos, imbuing him with smarts, a darkly comic bite, world weariness, and more emotion than anyone else, including Danvers. The last of those is naturally a problem for Captain Marvel, since the title character is usually supposed to be the strongest audience link — an issue it shares with the previous standalone Marvel introduction, Black Panther — but the bigger problem is that the writers and the directors haven't actually figured out who Danvers truly is, why she's worth rooting for, and what sets her apart from other Avengers, whom she's set to soon get on board with.

If there is a central thread in Captain Marvel, it's about resilience and independence, with pointed references to The Dark Knight and The Matrix, alongside a scene that will evoke memories of Rey's cave mirror scene from Star Wars: The Last Jedi. Free yourself, you are your own worst enemy, et cetera. For Danvers, that's tougher than usual, given she doesn't know which side she is on and what it is that she's truly fighting for. Boden and Fleck have cited RoboCop as an inspiration and, well, that fits. You can also read into Captain Marvel as being about women ignoring how men ask them to behave, in how Danvers is told to suppress her emotions, but it's a shame then that isn't developed as it ought to have been.

With most of the film taking place on what seems like one long day and a tight runtime of 124 minutes, Captain Marvel does deliver an enjoyable time at the movies, one that functions well enough for her entry into the larger world. (Avengers: Endgame is out in seven weeks.) But in an over-crowded universe — Marvel's might be getting a little lighter but there's no shortage of superhero stories, in general — the film needed to do a lot more to be anywhere near as powerful as its heroine. As it is, Captain Marvel is more a reminder of Marvel's early work (think the first Captain America or Thor) than its more recent output (Black Panther or Infinity War). It's no match for Wonder Woman, and that's a shame, because Captain Marvel deserves better.

But at least it tells us how Fury lost his left eye and where the word ‘Avengers' comes from. Sure, the latter feels like answering a question no one really asked, just as with many of the things in last year's disappointing Solo: A Star Wars Story, but the former is so hilariously cute that you might not ever look at Fury the same way again.

Captain Marvel is out Friday, March 8 in cinemas worldwide. There are two scenes during the credits: one in the middle and one at the very end.

Further reading: Captain Marvel, Brie Larson, Marvel, Disney, MCU, Avengers, Avengers Endgame
Akhil Arora Email Akhil Akhil Arora covers entertainment for Gadgets 360, interviewing stars such as Christian Bale and Anurag Kashyap, covering series premieres, product and service launches across the globe, and looking at American blockbusters and Indian dramas from a global socio-political and feminist perspective. As a Rotten Tomatoes-certified film critic, Akhil has reviewed over 150 movies and TV shows in over half a decade at Gadgets 360. When he is not completely caught up with new film and TV releases, Akhil ...More
Ottomate Smart Fan Launched in India at Rs. 3,999, Company to Bring Smart Lights Later This Year
iPhone Sales Are Falling, and Apple's App Fees Might Be Next

product Captain Marvel stars Brie Larson as the titular superpowered half-human, half-alien who goes on a journey of self-discovery on Earth in the 1990s. Captain Marvel release date is March 8 worldwide.

Captain Marvel Review: Brie Larson–Starrer Is No Match for Wonder Woman, and That’s a Shame
Comment