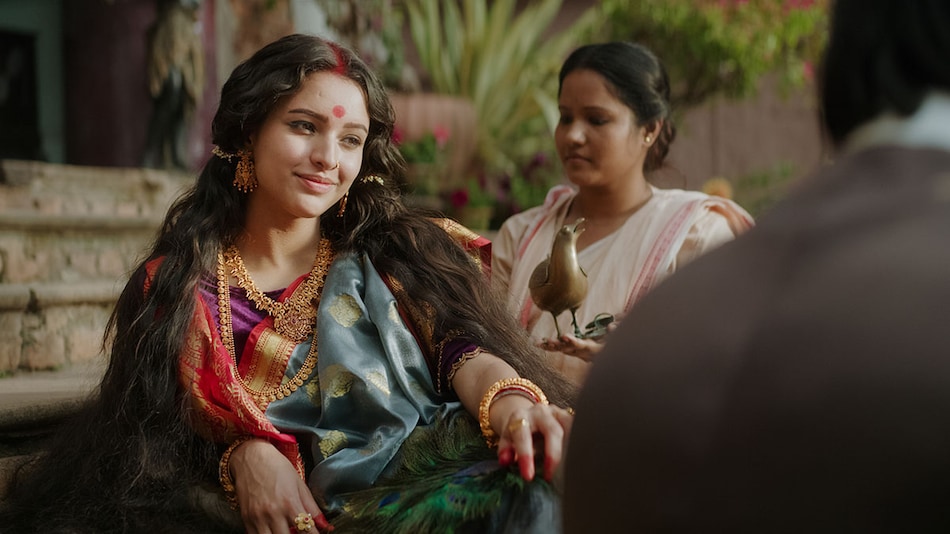 Tripti Dimri as and in Bulbbul

Bulbbul, the latest Indian original from Netflix, is a disaster. In a smarter film, its title character — Mrs. Bulbbul Chaudhary (Tripti Dimri, from Laila Majnu) — would have made a fascinating villain. For most of Bulbbul, she's adorned in the most exquisite sarees and jewellery. Whenever she's sitting idle, which is nearly always, as the lady of the house, Bulbbul fans herself with peacock feathers. And she makes no attempt to hide her true feelings, smiling ear-to-ear or heartily laughing at the predicament of others. Unfortunately, Bulbbul is stuck in a drab, inert, and ridiculous film, the kind whose plot you can entirely predict after watching the first few minutes. It's only the film's characters — except for Bulbbul — who fail to see otherwise, to the point where it all feels like a giant prank, as if they are merely pretending to act oblivious.

Nearly all of that is down to writer-director Anvita Dutt, a lyricist and dialogue writer who makes her directorial debut on the Netflix original. Bulbbul — a period supernatural tale set in Bengal — centres on the folklore of chudail, a woman who rises from the dead (with inverted legs) after an unnatural death. The English subtitles translate it as “demon-woman” but her behaviour on Bulbbul is more akin to a vampire. Though Dutt erases the misogynistic and patriarchal overtones of chudail to put a feminist spin on the story, she doesn't add to it in any meaningful manner. Moreover, Bulbbul's Bengal setting makes zero sense. Not a single character talks in anything but Hindi, and the film doesn't use the localised term for chudail. It may as well be set in any part of (British) India.

Though you wouldn't even know Bulbbul was set in British India by simply watching the film, since there's no trace of the British, except for a throwaway dialogue. Or the three words of on-screen text at the very beginning, which states “1881, Bengal Presidency”. The Netflix film opens with a child marriage, as a young Bulbbul (Ruchi Mahajan, from Yeh Teri Galiyan) is wedded off to a much older man, Indranil Thakur (Rahul Bose, from Shaurya). Bulbbul tries to throw viewers off by employing a happy background score and featuring a friend her age in Satyajeet Thakur (Varun Paras Buddhadev, from Koi Laut Ke Aaya Hai), but it does such a poor job that it serves as an early indicator of the film's predictability. Bulbbul is the only one convinced she was due to marry Satya.

Fast forward two decades as Satya (Avinash Tiwary, reunited with Laila Majnu co-star Dimri) returns from London, where he's been studying to be a lawyer. In the five years he's been gone, Bulbbul (Dimri) has assumed her aforementioned status as the lady of the house. Her husband is nowhere to be seen, her bumbling fool of a brother-in-law is dead, and his widow and her scheming sister-in-law Binodini (Pauli Dam, from Hate Story) has been forced to shave her head and out of the palatial house. The relationship between Bulbbul and Binodini is like a relic from the soap opera era, full of jealousy and pettiness. (Strangely, there are no kids to be seen anywhere, which is curious given being baby-factories was deemed as the only reason for women's existence in those times.)

The film's story unfolds in two parallel timelines thereafter. There's the one in 1901 as Satya investigates a series of murders, solely of men, which are attributed to a chudail by village folk, for the bite marks on the victims. And the other consists of flashbacks, as we witness Bulbbul continue to pine after Satya and suffer a litany of atrocities from everyone else in the household. It's obvious to everyone and their grandma that Bulbbul had a thing for Satya and that she's the chudail — something she all but hints at on multiple occasions — but it takes ages for the other characters to figure it out. And to make matters worse, Bulbbul keeps on hammering home the same point across multiple scenes, wasting time on a film that runs just 90 minutes.

The amateurish writing and direction is matched by a lazy background score on Bulbbul, consisting of generic tunes that seem like the first search result you'd get on Google after typing “horror music”. That's surprising given Amit Trivedi is the composer, known for his work on the likes of Andhadhun, Dev.D, and Udaan. That lack of originality translates as both oppressive and over-the-top, which is also the case with the saturated tones of red — the cinematographer is Siddharth Diwan (Queen) and the production designer Meenal Agarwal (Dum Laga Ke Haisha) — that bake night-time scenes to convey a sense of dread. Diwan's camerawork is the only technical aspect of Bulbbul that doesn't call attention to itself, with the other departments seemingly succumbing to the director's wishes.

All that ultimately results in a catastrophe of epic proportions. Its rote, tired dialogues will make you roll your eyes. The tonal dissonance and foolish characters will pull you out of the movie. And it doesn't have anything worthwhile to say about male entitlement and the treatment of women. In the hands of a more capable writer-director, Bulbbul would've upended viewer's expectations from a movie about the folklore of chudail, than merely play into them. It could also have been Netflix's first Bengali-language original. Instead, Anushka Sharma has helped deliver a dud for Netflix, which may as well write off the first half of 2020, having given us seven straight Indian films on the spectrum of mediocre to downright terrible. It's almost as if the streaming service is masochistic.

Bulbbul is now streaming on Netflix in India and across the world.