Kelly Reilly as Kerra in a still from Britannia

Through a mix of violence, sex, an epic scale, and powerful characters, Game of Thrones has made itself the biggest TV show on the planet. But with a final season only due in 2019, and no new episodes this year, there’s an opportunity for other fantasy shows to get a foot in. HBO is determined to hold onto that audience, which is why there are no less than five spin-offs in the works.

The spin-offs are set to arrive as early as 2020, just a year after Game of Thrones wraps up in 2019. But other networks are joining the party too. Sky Atlantic, the British broadcaster for Game of Thrones and other HBO shows, has a new large-scale fantasy series of its own: Britannia, which it co-produced with Amazon.

Britannia has many of the elements that Game of Thrones began with: an ancient period setting, a sprinkle of fantastical elements, and a wide ensemble cast. It’s got a good setup theoretically, but can it deliver what fantasy epic fans want? We’ve seen multiple episodes from the first season, and here’s what we can tell you. 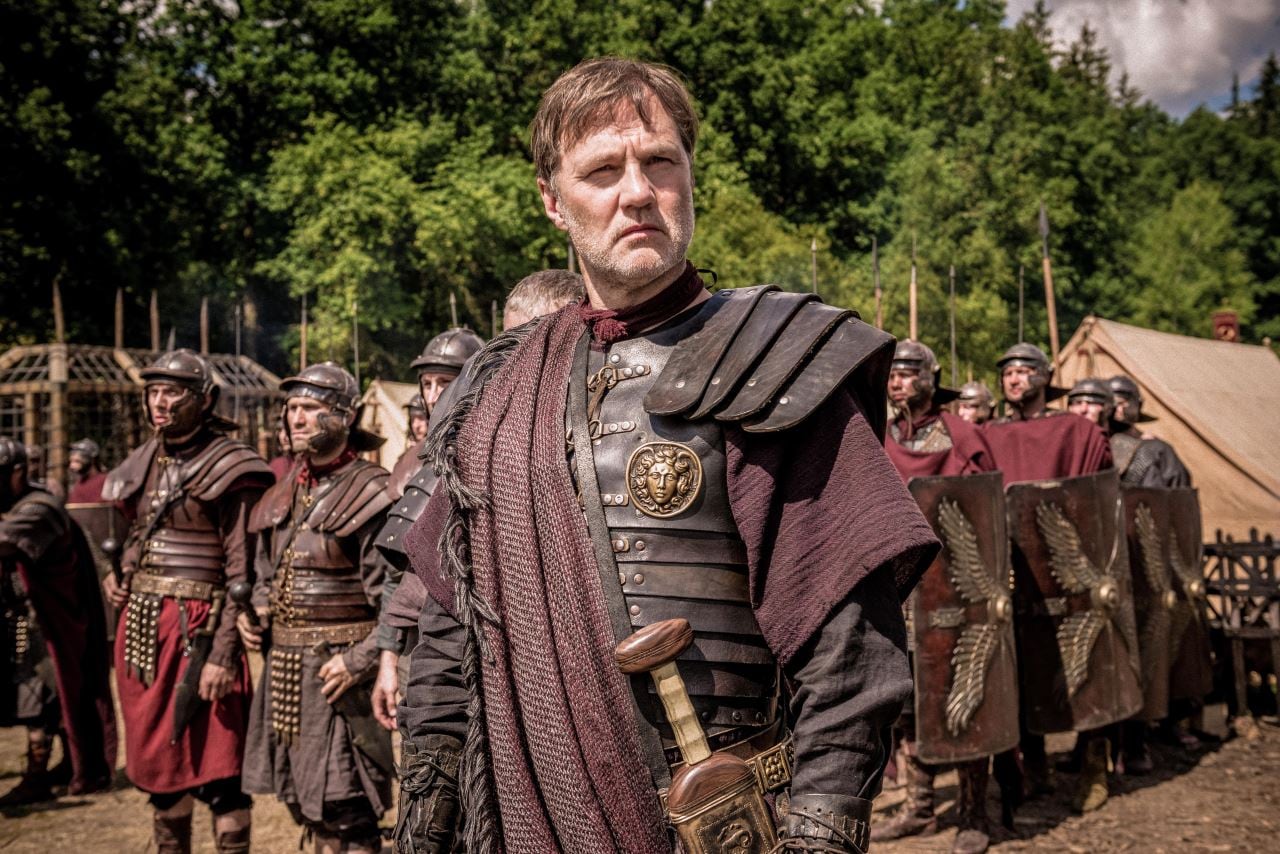 David Morrissey as General Aulus Plautius in a still from Britannia

When is it out? How many episodes?
Britannia premieres January 18 on Sky Atlantic in the UK, with all nine episodes of the first season available on day one just like a Netflix series. It’ll then arrive on Amazon Prime Video in the US on January 26, and should come to India as well. We’ve reached out to Amazon India to confirm, and will update once we hear back.

What is it about?
Set in 43 AD, Britannia is about ancient Rome’s invasion and eventual conquest of the Celts in the British Isles, what is known as modern England. Romans are led by Aulus Plautius (David Morrissey), who’s the first general to retry conquering the land where Julius Caesar himself failed. The Celts, on the other hand, are divided between different tribes, and must work together to fight off the Roman invasion.

The creators – Jez Butterworth (Spectre, Jerusalem), his brother Tom, and others – knew that a simple history lesson wouldn’t appeal to the masses, so they’ve added magic, wizardry and spiritualism by way of druids “who can channel the powerful forces of the underworld”.

Okay, what is it actually about?
When the Romans arrive, the Celtic tribes have been in-fighting for generations, with the Cantii – led by King Pellenor (Ian McDiarmid) – bickering and scheming to get rid of Queen Antedia (Zoë Wanamaker) and her followers. Aulus Plautius sees he can take advantage of the situation, though he has to deal with the stories weaved by those who fled with Caesar: how the land is filled with ghosts and nightmares.

That has instilled a fear in his men, and the Druids fully exploit that to cause further chaos to achieve their means. The Druids are also widely respected by the Celts, who defer to them on matters of judgement, believing they are in communication with the gods. 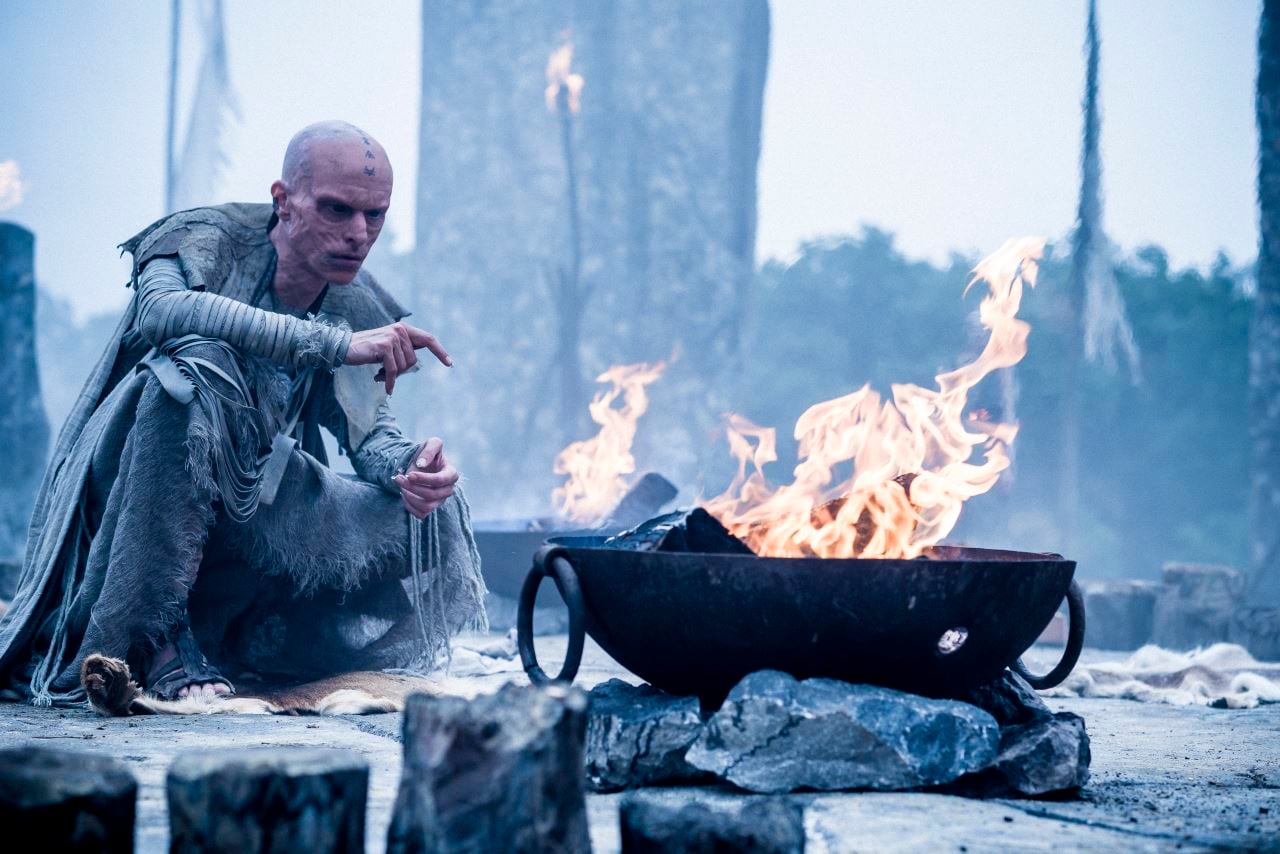 Mackenzie Crook as Veran, the leader of the Druids, in a still from Britannia

Who are the main characters?
Britannia has a wide ensemble, as we said before, with nearly two dozen main cast members. Like Game of Thrones, this means the show can kill important characters when you’re least expecting it. The first few episodes do build up in a way that you can start to see major confrontations come the end of the season.

David Morrissey (The Walking Dead) plays General Aulus Plautius, and he’s one of the few figures who’s been directly drawn from history. The character is level-headed yet a maverick, who likes making his own decisions and asserting his authority.

Kelly Reilly (True Detective) plays Kerra, daughter of the King of the Cantii, a fiercely independent woman who loves her father but questions his decisions, and pays the price for insubordination.

She has a brother, Phelan (Julian Rhind-Tutt), who’s the heir to the throne, but he’s feeling pretty emasculated at the start of the show because his wife, Amena (Annabel Scholey), has been given a second husband by the Druids – Lindon (Stanley Weber) – to help her bear children (and future heirs).

Kerra is also sleeping with his brother’s wife’s second-husband whenever she gets the chance, so it’s all getting Game of Throne-sy. 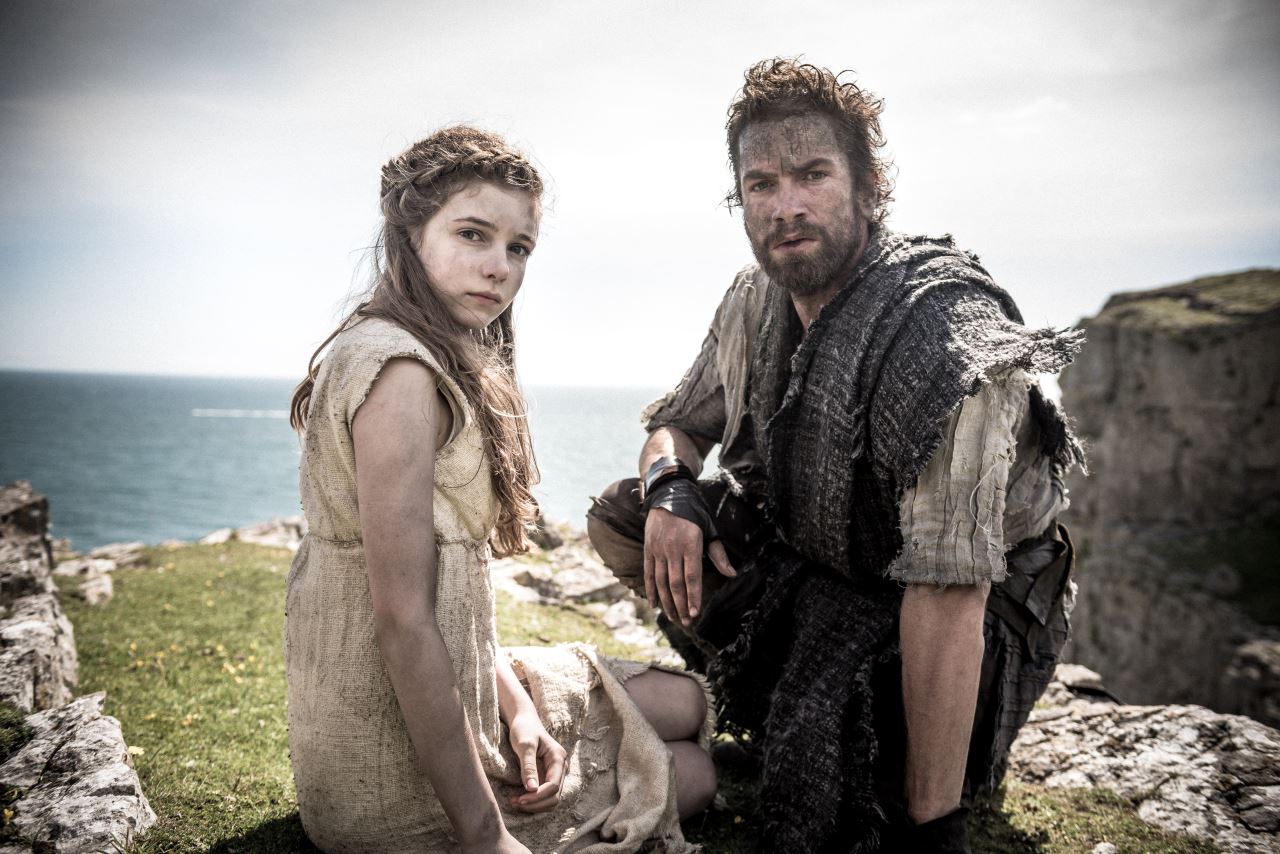 Eleanor Worthington Cox as Cait, and Nikolaj Lie Kaas as Divis in a still from Britannia

The Druids are led by a bald man named Veran (Mackenzie Crook), who inhales a lot of homemade herbals that enlarge his irises and give him an otherworldly look, and then preaches about what the gods demand. Crook’s performance makes him a thoroughly unsettling figure.

Britannia also follows a rogue Druid called Divis (Nikolaj Lie Kaas) – known as the Outcast to most – who has a few telepathic abilities and claims to have visited the underworld. In the first episode, he meets a young girl Cait (Eleanor Worthington Cox), who’s separated from her family during the war, and their relationship is a bit like The Hound and Arya from Game of Thrones.

What’s the show like?
Having been shot on location in Czech Republic and Wales, it looks the part. Its budget does seem more than Game of Thrones’ first season, which spent most of its time with the Starks inside different rooms. There are growing pains when it comes to writing, with the writers trying to cram too much in in the pilot. Theme music is a complete tonal mismatch, with the choice of instruments not gelling at all with Britannia’s setting and time period.

Thankfully, Britannia isn’t spinning its wheels. It’s got a lot to go through, and the show has powerful female characters who can’t be bothered with the ways of their rulers, and must come together to stop a foreign invasion. History tells us they’ll fail, but... Britannia isn’t bothered with accuracy – it’s got superpowered individuals and strange visions for a reason.