In 2001, the BBC released an eight-part cinematic deep dive of the world’s oceans called The Blue Planet, with David Attenborough as the narrator and presenter. It brought to our screens extraordinary shots of marine life, and their behaviour that had never been filmed. Sixteen years later, and four years in the making, Blue Planet II – the sequel with a wiser and older Attenborough in the same role – has arrived, promising us a better view thanks to improvements to technology.

Filming for the new series has involved 125 expeditions in a total of 39 countries, with the crew spending more than 6,000 hours below the surface. It’s resulted in the production of seven episodes altogether, being broadcast in the UK from October to December. BBC has already presold the full season to 30 countries, and it’s scheduled to arrive in India via Sony BBC Earth next February. There’s a companion podcast for the series too, if you enjoy that sort of thing.

The first episode of Blue Planet II, titled One Ocean, charts the globe from the warm waters of the tropics to frigid, icy sections of the poles. The journey begins off the coast of South Africa where bottlenose dolphins are surfing on waves for the sheer joy of it, and checks in with tuskfish and trevallies before ending on a poignant note with walruses up north near the Arctic, their habitat disappearing before their sights.

It’s not just shot wonderfully, but paired with similar composition too, thanks to the bombastic score provided by Hans Zimmer, who returns after working on Planet Earth II last year. BBC wanted to keep things fresh with the new nature documentary series, executive producer James Honeyborne said, but the 60-year-old German composer – better known for his work on The Dark Knight, Inception, and The Lion King – had “such an impassioned pitch” that the studio handed him the reins anyway.

As always, the show begins with an Attenborough monologue to camera, as he talks about how unexplored the oceans are despite occupying 70 percent of our planet's surface, and the need for Blue Planet II in today’s time, be it the ability to capture in unforeseen ways, and highlight the massive negative impact human activities are having on wildlife, showing us why we must do more to mitigate our impact. And not soon, but right now and yesterday.

No other segment of the opening hour of Blue Planet II is a bigger, heart-wrenching proof of that recklessness and apathy than the one following a walrus mother and calf in the icy waters of Svalbard, Norway. Attenborough’s voice-over reiterates what we’ve known for some time: the extent of summer ice in the Arctic has fallen by 40 percent in just the last three decades, something that had been virtually unaffected for millennia.

Though the walrus can swim, they prefer the warmer land for resting. But chased off by a mother polar bear who’s looking to feed her young, the aforementioned pair have no choice but to jump into the colder environment, where the bear can’t follow them. The baby walrus needs to rest though, and floating ice is hard to come by in the summer. It’s made tougher still owing to competing families, with each mother looking out for their own.

Elsewhere, Blue Planet II brings to light unseen or unfilmed behaviour of these marvellous sea creatures. At the Great Barrier Reef – often described as the largest living thing on Earth, covering an area nearly the size of Germany – a tuskfish travels to the edge of the coral reef every morning in search for food. It carries the clam it finds back to a massive rock, and then bashes it repeatedly to crack it open. “It’s not easy when you’ve no hands”, Attenborough notes. Another startling segment takes us a little south to New Zealand during springtime, when the bounty of food brings in visitors: Bottlenose dolphins, being chased by 6-metre-long false killer whales, who are relatives of the orca. But just as they are surrounded by the latter, the dolphins turn around to greet them, as if they're extending a peace offering. Attenborough says that scientists studying them think the individuals know and remember each other, and have turned into long-time friends over the years. They even work together as a 1,000-strong force to forage for food.

But the most enlightening and talked-about section of the Blue Planet II premiere – like how the iguana and racer snake chase was for the Planet Earth II premiere – will be the kobudai fish, an ugly specimen with a big bump on its forehead, which can alter its sex. Females of a large enough body size can undergo a months-long transformation to become a male, and then challenge the existing males for mating rights in their territory.

In terms of chases though, the opening episode offers up a coastal encounter on a remote atoll in the Indian Ocean, between giant trevallies and tern hatchlings, who practise flying in the lagoon before taking to the open seas. But the bigger challenge is to be wary of tiredness and resting on the sea waters, where the trevallies hunt for food. The large fish is an extraordinary predator, capable of calculating air speed, altitude and trajectory of its prey. In short, leaping out of water to snatch a bird out of the sky. 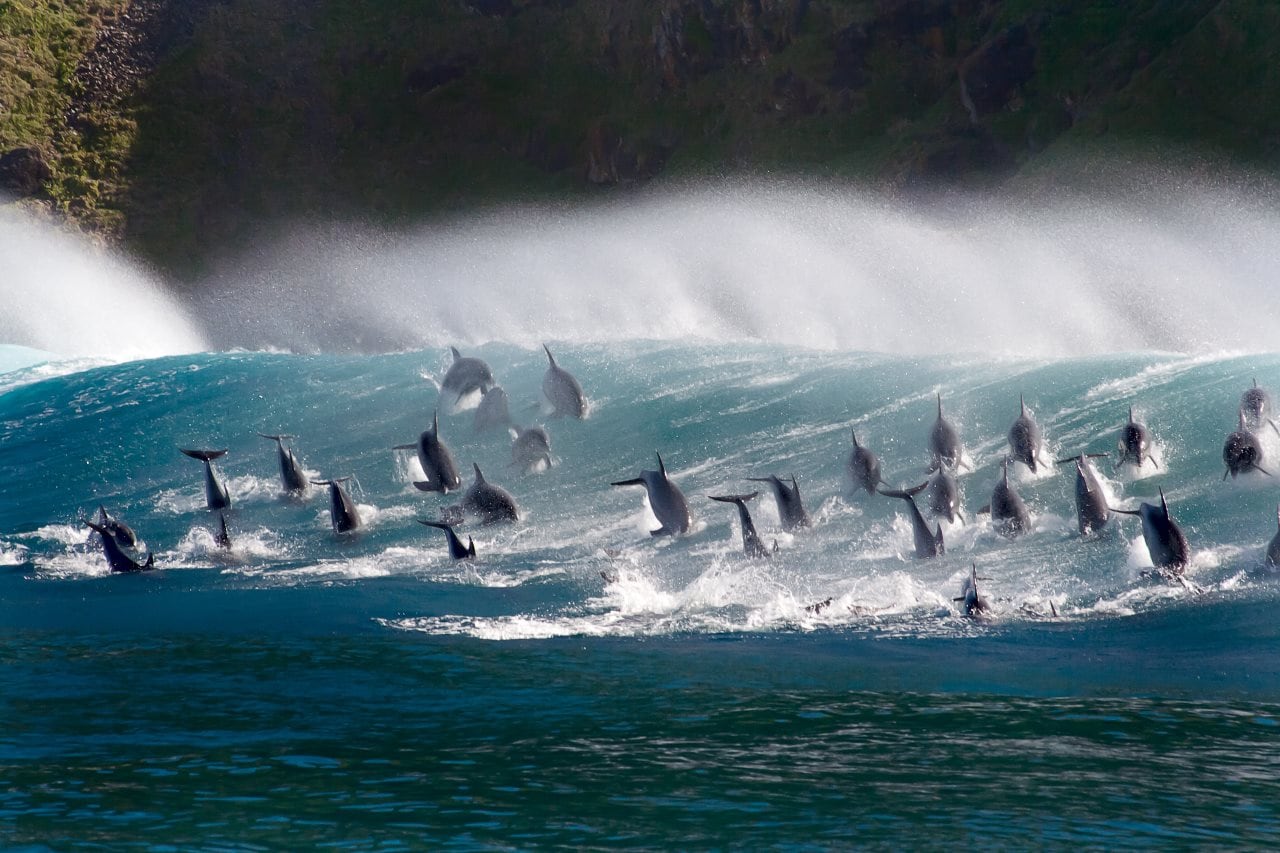 Stuffed between these exotic chapters are tiny revealing moments, such as the bottlenose dolphins rubbing their bodies on corals for its medicinal benefits, and mobula rays jumping out of water for reasons we have yet to figure out. And like on Planet Earth and its sequel, each episode is bookended by a making-of segment, called Into the Blue, which offers a peek into the challenges faced by the production crew in getting the footage.

There’s a lot more to come over the next six weeks, with episode two – The Deep – making use of giant submersibles to study life at the bottom of the ocean, and episode three titled Coral Reefs exploring the eponymous underwater ecosystem at length, which are some of the most endangered parts of our planet today. For all its lush, visual beauty, shows like Blue Planet II can sometimes hide the ugliness that human lives have heaped on the only habitat we know of.

Unfortunately, it’s only getting worse on a policy-making level, given the likes of the US have further crippled our recovery efforts by pulling out of the Paris climate agreement. Hopefully, the millions spent by BBC in bringing this show to air will help shake the deniers, and spur everyone in doing our bit to conserve resources and lead a more sustainable lifestyle.

Blue Planet II is available via BBC iPlayer in the UK, and various channels in other countries. If your country is not listed, use the Chrome extension Beebs to access iPlayer where you live.

Further reading: Blue Planet II, Blue Planet 2, BBC, BBC Earth, BBC iPlayer
Akhil Arora Email Akhil Akhil identifies himself as a stickler for detail and accuracy, and strongly believes that robots will one day take over most human jobs. In his free time, you will find Akhil beating the computer at EA Sports FIFA or streaming new highly-rated TV series. More
Best Science Fiction Books Releasing in November 2017
Is VR the Future of Content? Here's What Netflix and Dolby Have to Say

product A sequel to the 16-year-old original, Blue Planet II takes us back underwater, giving us a glimpse at startling events and wildlife behaviour.