All the best episodes of Black Mirror – the anthology sci-fi series from Charlie Brooker that focuses on the unanticipated pitfalls of near-future technologies – introduce a new concept and the likely social, ethical, and physical ramifications of it, before driving up the horror in an insidious fashion which either culminates in a smart late twist that magnifies it, or effectively call backs to an earlier moment.

That’s true of the Jon Hamm-starrer “White Christmas” episode, or last year’s biting social media commentary in “Nosedive”. (The Emmy-winning “San Junipero”, which focused on an inter-racial couple living in a digital afterlife, remains a lone exception to this rule.) But there are times when this approach fails to deliver, because the build-up is too slow and unconvincing, the late twist defies belief, or the episode fails to properly identify its themes.

Black Mirror’s season four – which is out Friday, December 29 – is a mixture of both, with some episodes coming up short, while others execute their nightmarish visions in bloody, spine-chilling ways. Unfortunately, there are no happy stories in this new crop of six episodes, though there are some laughs scattered across, including a scene where someone grabs a teddy bear by the neck and threatens it.

The most awaited of the lot has been the Star Trek-inspired “USS Callister” – the only episode in season four to have been co-written by Brooker with William Bridges, with every other episode having Brooker as the sole credit – which stars Jesse Plemons (Fargo season 2), Cristin Milioti (The Wolf of Wall Street), Jimmi Simpson (Westworld), and Michaela Coel (Chewing Gum) among others. Owing to Netflix’s stringent spoiler guidelines, we can’t say anything about the plot except that much of it is set in space.

Because of that, “USS Callister” is easily the most expensive episode this year, with the level of production and costume design required for authenticity, along with the cost of CGI for delivering spaceship scenes, Trek-style beam technology, and alien creatures. The episode also directly references the presence of the original Trek series – the opening sequence is even shot in 4:3 aspect ratio, and edited to match the 60s film stock – but skips any legal hassles by calling the show and its crew ‘Spacefleet’ instead of Starfleet.

It's not a direct space story per se; this is Black Mirror after all, and the episode uses its setting to talk about topics such as power fantasy, social exclusion, virtual consciousness, and privacy. Though Plemons is the captain of the Callister, he’s the kind of overbearing authority that Hollywood has slowly begun kicking out of its stable in the wake of widespread sexual harassment allegations. Brooker’s work has never been decidedly political, and “USS Callister” is only tangentially about female empowerment, with its focus being how technology enables creeps. 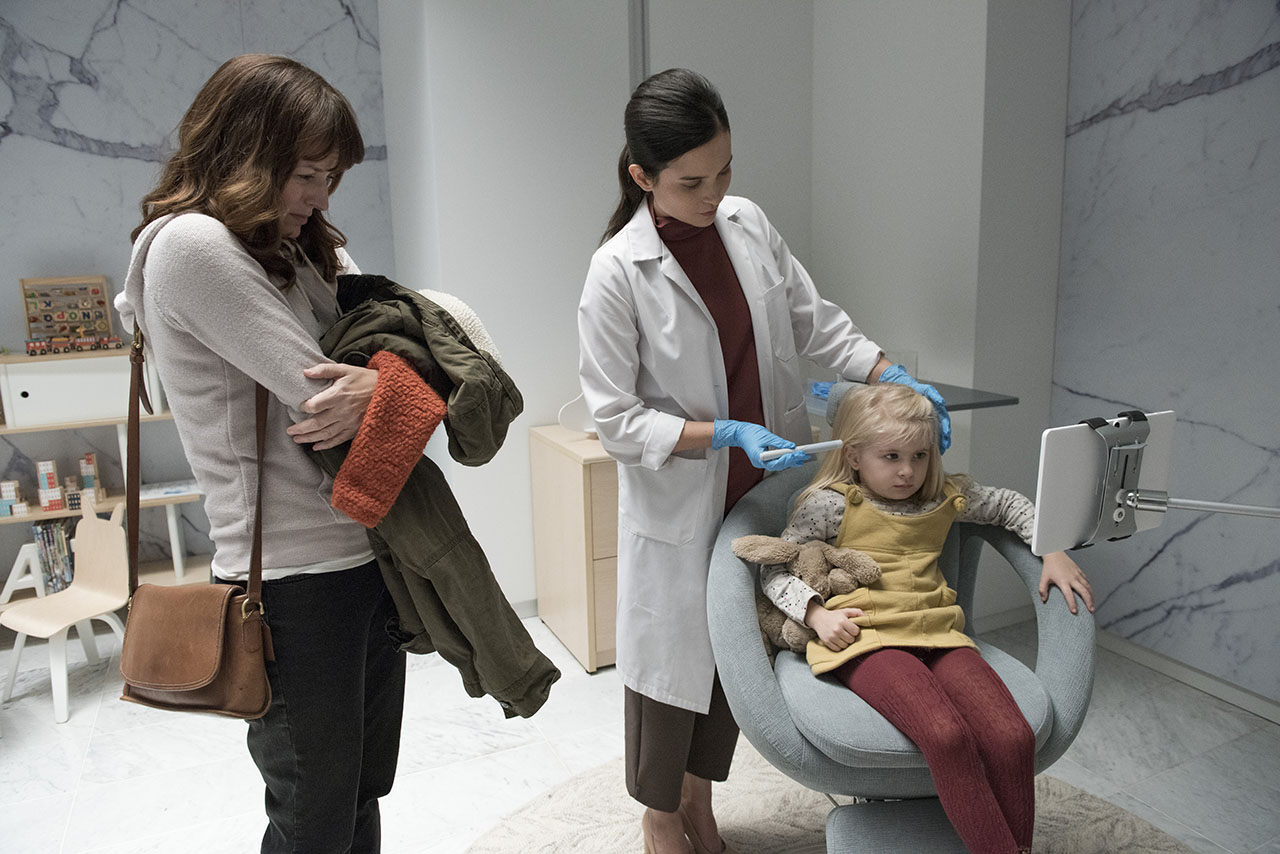 The disappearance of privacy is also central to the Jodie Foster-directed “Arkangel”, which takes the concept of helicopter parenting to its logical extreme. After her daughter Sara goes missing at a local park, as in shown in the trailer, the physiotherapist mother Marie (Rosemarie DeWitt) opts to have an implant installed in the child’s head, which allows her to keep a track on her always. It’s like the iPhone’s ‘Find My Friends’ app, except there’s no turning off and it never runs out of battery.

“Arkangel” takes place over several years, following the daughter as she grows up with having a tracker inside her head, and the consequences of Marie’s impulse decision to protect her child. Her father, the daughter’s grandfather, even voices his protestations and says that children grew up fine without any kind of monitoring. As Sara becomes older, Marie consents to not use the tracking abilities, but Sara's teenage rebellion phase results in a series of escalating situations that lead her mother to snoop on Sara’s actions.

Even as the episode tackles important privacy vs security topics, it falters on multiple levels, be it the few leaps of logic required to make its central technology work, the restrictive nature of tracking and lack of any parental controls, and a big moment towards the end that feels entirely unconvincing, and feels shoed in to drive the plot. Plus, the events in “Arkangel” could easily have been told in a short film, making the almost hour-length unnecessary. 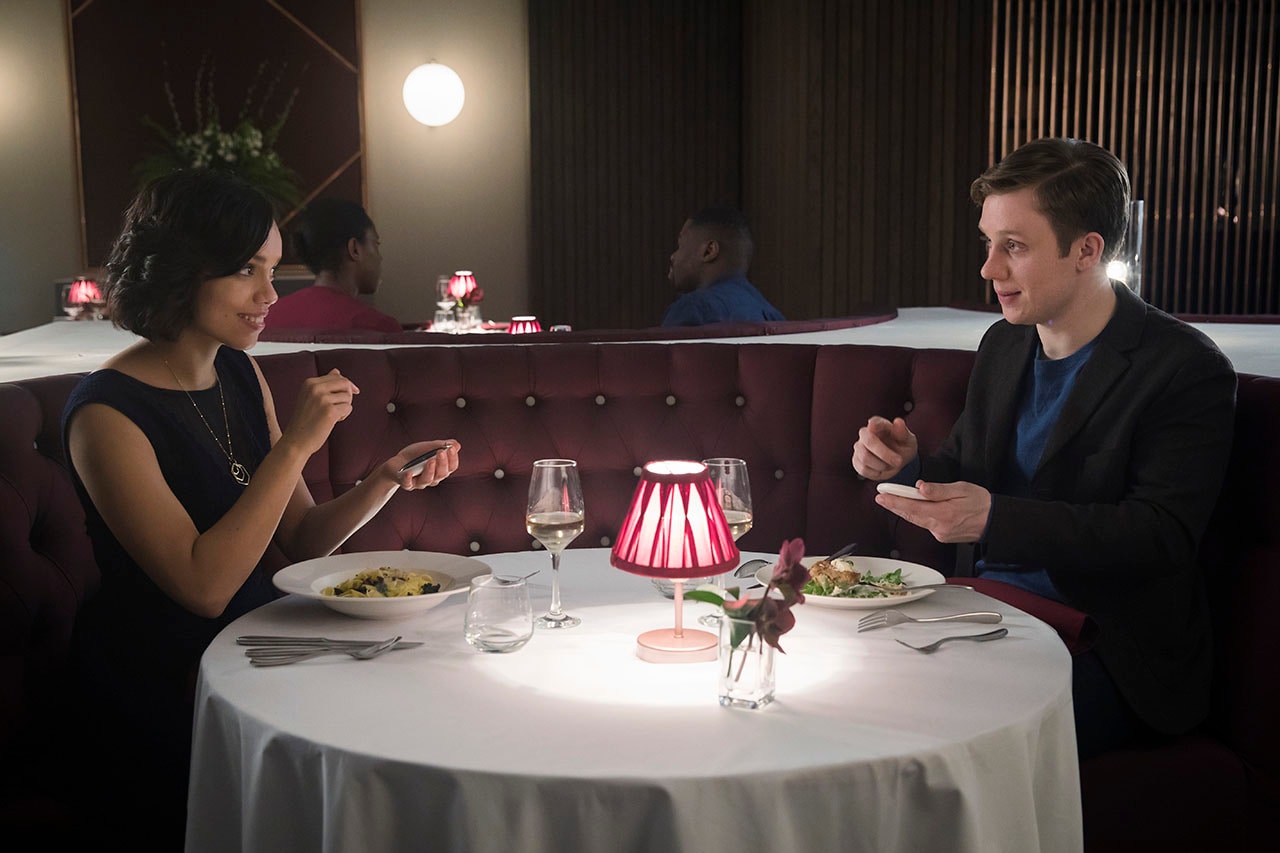 That’s also the case with season four’s take on near-future dating apps in “Hang the DJ”, which focuses on two primary characters played by Georgina Campbell (Broadchurch), and Joe Cole (Peaky Blinders). The two are matched by an advanced dating system that collates and studies every interaction you’ve and then uses that to find the perfect match for you after a series of relationships. It also decides how long you’ll have with every person, before being forced apart.

When Campbell and Cole’s unnamed characters first meet, they realise they only have 12 hours together. Despite their initial awkwardness, the two end up enjoying each other’s company, but are compelled to move on to the next relationship the new day. Though they see each other at social events (it’s a very small remote town), they don’t see much of each other until years later.

Directed by Tim Van Patten (The Sopranos, Game of Thrones), “Hang the DJ” resides on a singular big twist to amaze you that has to do with machine learning, but when it does arrive 50 minutes in, it feels as if the episode could easily have been shortened. It’s still enjoyable in parts – it has the most laughs and sex of any Black Mirror season 4 instalment, and hence the most light-hearted of the six – but there just isn’t enough here to carry you across. 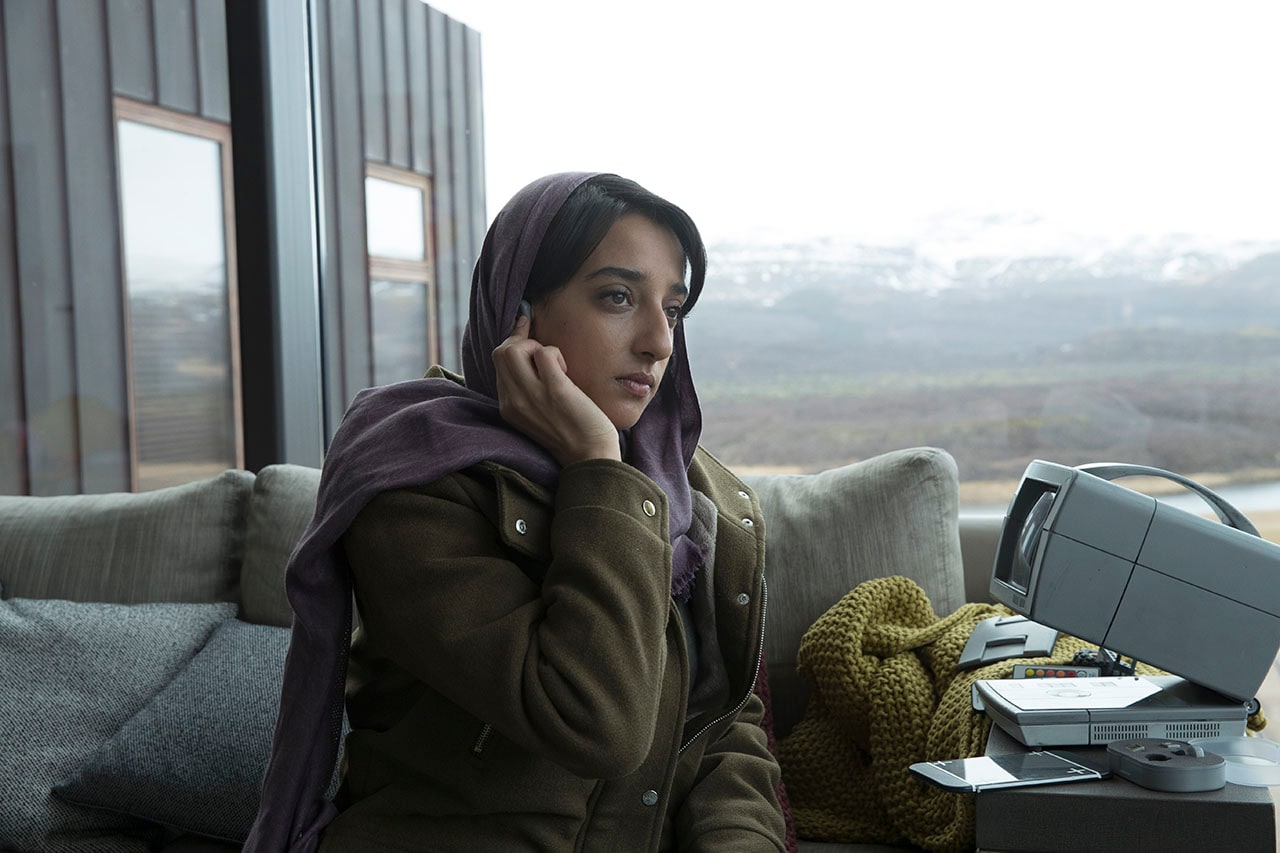 Thankfully, the remaining episodes are much better, though they may not suitable to everyone’s taste given the level of violence, blood, and gore in all three. The season opener “Crocodile” – shot in Iceland, though there’s no mention of its people or their language – follows a successful woman called Mia (Birdman’s Andrea Riseborough). After a terrible secret comes back to haunt her many years later, she unravels in the most unexpected way.

The technology at the centre of “Crocodile” is a device that allows authorities to access your memories, or rather the impression of how you remember things. It sounds a bit like the device in “The Entire History of You”, though here it’s merely a recollection and not a recording, which means the police can’t rely on it as evidence, given memories can be totally subjective. The technology has been put into law in Black Mirror’s near-future, which brings up many thorny concerns.

Kiran Sonia Sawar (Murdered by My Father) plays Shazia, an insurance agent who uses it to build her case by talking to witnesses and corroborating a version that makes sense, and in turn help process claims in the case of an incident. An accident involving a driverless pizza carrier and a pedestrian eventually leads Shazia to Mia’s doorstep, with the episode unfolding in parallel subplots.

“Crocodile” is an exact fit for Black Mirror’s oft-used setup we talked about at the beginning, and the episode smartly delivers an ending that relies on a throwaway moment. Directed by John Hillcoat (Triple Nine, Lawless), it also benefits from Riseborough’s taut acting, which requires her to deliver a stern character who’s slowly spiralling out of control on the inside, leading to one crazed action after another.

The season finale, “Black Museum”, is a different kind of thriller, though it’s definitely not for the faint-hearted. It takes place at a crime museum located in the middle-of-nowhere USA, where the proprietor Rolo Haynes (Douglas Hodge) gives a tour and regales a young British woman played by Letitia Wright (Ready Player One), who’s waiting for her electric car to be charged outside. Partly based on a story called Pain Addict by Penn Jillette, the magician, comedian and author part of Penn & Teller, “Black Museum” operates in a similar fashion to “White Christmas” in that it has three stories in one.

All three stories connect back to Haynes, a former researcher who pioneered the use of beta technologies, such as a device that allows a doctor to feel a patient’s pain and help diagnose them faster, the ability to transfer someone’s consciousness if they were dying, and creating a living hologram of someone that could be made to do anything. Each of these technologies have their own gigantic problems, and “Black Museum” does well to explore addiction, social control, agency, digital rights, and even white supremacy.

That leaves “Metalhead”, the first-ever Black Mirror episode fully in black and white, which follows a woman (Maxine Peake) being chased by a killer robot dog. Imagine a more compact, evil version of Boston Dynamics’ four-legged bot. Directed by David Slade (Hannibal, American Gods), it takes place in a post-apocalyptic version of the Scottish Highlands, though the nature of humanity’s collapse and the birth of these menacing dogs is never explained properly.

“Metalhead” is unlike the rest of season four in both visuals and treatment, as Peake is the only major character throughout the episode. Everyone else who appears on screen is already dead, dies in two minutes, or isn’t human. Given the robot has no face, the episode lives and dies with Peake’s performance as the protagonist, as well as smart direction from Slade. And unlike “Hang the DJ”, “Metalhead” is edited to be 40 minutes, so it doesn’t overstay its welcome. 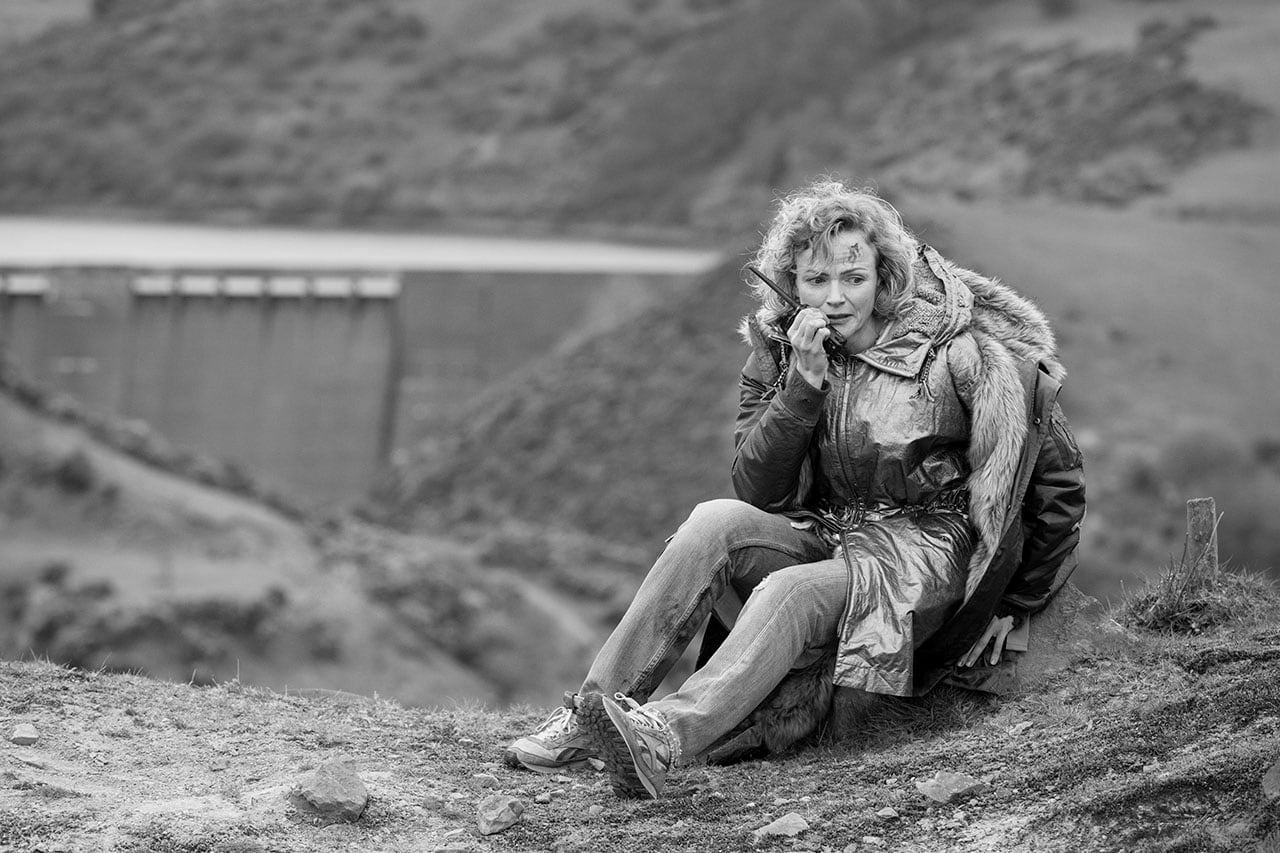 Despite the show’s rise in popularity since its arrival on Netflix last year, there’s a lack of star power in Black Mirror’s latest season. Part of the reason for the overwhelming reception and success of “San Junipero” were the performance chops of Gugu Mbatha-Raw and Mackenzie Davis, just as Bryce Dallas-Howard was important for “Nosedive”, and Kelly Macdonald was stellar in “Hated in the Nation”. Season 4 is much lighter in that regard, with the biggest acting name – Jodie Foster – behind the camera.

Brooker also continues to push the notion that all his episodes exist in the same universe, with mentions, acknowledging nods, and visual gags for other season 4 episodes and even past seasons itself. These don't affect the plot in any way, which is good since anyone who hasn't seen previous seasons or wishes to watch the new season in their own randomised order won't be affected, but they do add fun bits for Black Mirror devotees.

The fourth season of Brooker’s show – which adds six more stories to the existing canon of thirteen – revisits some familiar themes in a new approach, while expanding the topics it tackles in frightening new ways. Though some hour-long episodes feel longer than necessary, others that even cross the 60-minute mark have enough material for their runtime. And when everything clicks in place, Black Mirror is still one of the smartest shows around, giving us a prescient look at our inevitable future if we act before we think.

All six episodes of Black Mirror season 4 will release December 29 on Netflix worldwide.