The most frequent complaint for Marvel's biggest movies has been a lack of stakes. For all the hell unleashed by Loki (Tom Hiddleston) and his Chitauri army in The Avengers, Ultron and his army of robot clones in Age of Ultron, or the Avengers’ internal dispute that was at the centre of Captain America: Civil War, our heroes have more or less come out unharmed at the other end. Characters who seemingly died have been brought back in the same film, be it Nick Fury in The Winter Soldier, Groot in Guardians of the Galaxy, or Loki in Thor: The Dark World. The trouble with all that is when audiences know the characters are being kept away from any serious consequences, there’s no real gravitas in the danger posed by the villains.

Anthony and Joe Russo, the directing duo of Avengers: Infinity War – in addition to Civil War and The Winter Soldier previously – know this better than anyone. And because this new mega team-up is the beginning of the end for the current generation of Marvel superheroes, and because the film has dozens of characters, it can do away with some and still have plenty to go around. That helps generate stakes and makes Infinity War different from any other Marvel film. Moreover, the film clearly establishes early on, that Thanos (Josh Brolin) is extraordinary powerful, and his four minions – his adoptive children like Gamora (Zoe Saldana) and Nebula (Karen Gillan) were – are quite capable on their own. That ensures the villains are taken seriously, and that there's a heft to them.

At the same time, it’s amazing that the film, written by Christopher Markus and Stephen McFeely – they also penned The Winter Soldier and Civil War – has a handle on every character and makes sure their idiosyncrasies, mannerisms, and behaviours get a glimpse, which provides a lot of humour within its otherwise heavy self-serious narrative. It’s fun to see Peter Quill's (Chris Pratt) insecurity rub up against Thor’s (Chris Hemsworth) hyper-masculinity, the collision of egos between Tony Stark (Robert Downey Jr.) and Doctor Strange (Benedict Cumberbatch), Cap's (Chris Evans) inability to understand humour, or even the clash between Bruce Banner and Hulk (Mark Ruffalo).

In addition to the delight of seeing various characters who've never met each other rub off on one another, talk shop, and exchange banter, it's also staggering to see how much Marvel's universe has grown when it's all brought together on a single canvas. The directors and the writers deserve praise for not making Infinity War feel rushed, as it has plenty of quiet meaningful moments for its characters, especially for Vision (Paul Bettany) and Scarlet Witch (Elizabeth Olsen), Quill and Gamora, and Stark. This isn’t true for most of the others, such as Cap and Black Panther (Chadwick Boseman), but that Infinity War can craft some genuine heart-breaking moments in such a massive get-together is a marvel.

Avengers: Infinity War begins where Thor: Ragnarok’s post-credits stinger left off, with Thanos’ ship intercepting the Asgardians. Infinity War uses Thanos as its viewpoint, as he goes after the Infinity Stones one by one. His goal is to collect all six, with which he could then wipe out half the universe with a snap of his fingers. Earth is important because two of the powerful, glowing ingots are here. One’s in the care and protection of Doctor Strange, while the other is embedded in Vision’s forehead, essentially keeping him alive. As they try to stop him, the film divides up the heroes: Thor ends up with the Guardians momentarily; Iron Man, Strange, and Spider-Man end up together; and the rest secure Vision in Wakanda. 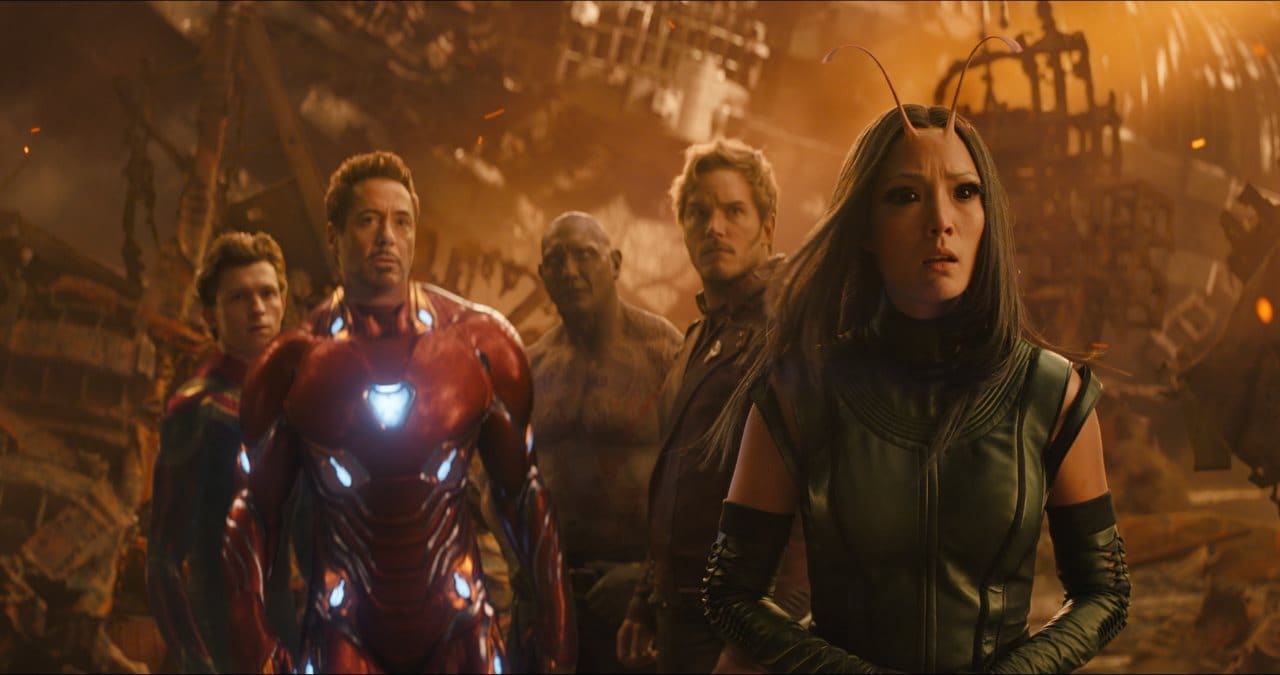 Everyone, except Ant-Man and Hawkeye, is involved into the universe-spanning conflict. To not let the scale overpower it, Infinity War is smart about a few things. Early on, by anchoring the camera on the same height as our human heroes, it lets us feel the impact and power of things. Again and again, it forces the character emotionally closest to the character-at-risk to make a crucial decision, which deepens and rewards the audience’s investment. And it presents a twisted and half-compelling argument of Thanos’ solution to overpopulation in the Universe, egged on by what he saw on his home planet, Titan. That he’s revealed to be a more layered villain than what’s been presented in the post-credits scenes is a surprise, and his CGI-driven looks have been toned down, which also helps matters.

Better yet, Infinity War can fuse that with a constant sprinkling of levity, letting the goofier characters mesh alongside the more straightforward ones, though its villains never get that treatment as Rian Johnson did with Star Wars: The Last Jedi. Like it, Infinity War goes to some dark places, but then pushes further: there are no punching-the-air moments in the film’s final third. Most films on this scale get to be dark for a while, and then end in a climactic battle where heroes win the day. But since Infinity War will be followed by Avengers 4, it can essentially go to much darker places. The heroes are never on the winning side when it comes to Thanos.

It’s also why the Infinity War can deliver such a gut punch of an end. At the premiere in India, it left the theatre entirely silent during the credits. But the end is also deliberately unfinished, because despite what the directors say, the film feels like the first half of a two-parter. The true impact of Infinity War will only be felt once Avengers 4 rolls around, and to what extent it reverses the events that unfold in the final moments of this film. Given how important some heroes are financially to Disney-Marvel, how far it goes, and a throwaway hint to a solution, it seems likely that much of it won’t be permanent. 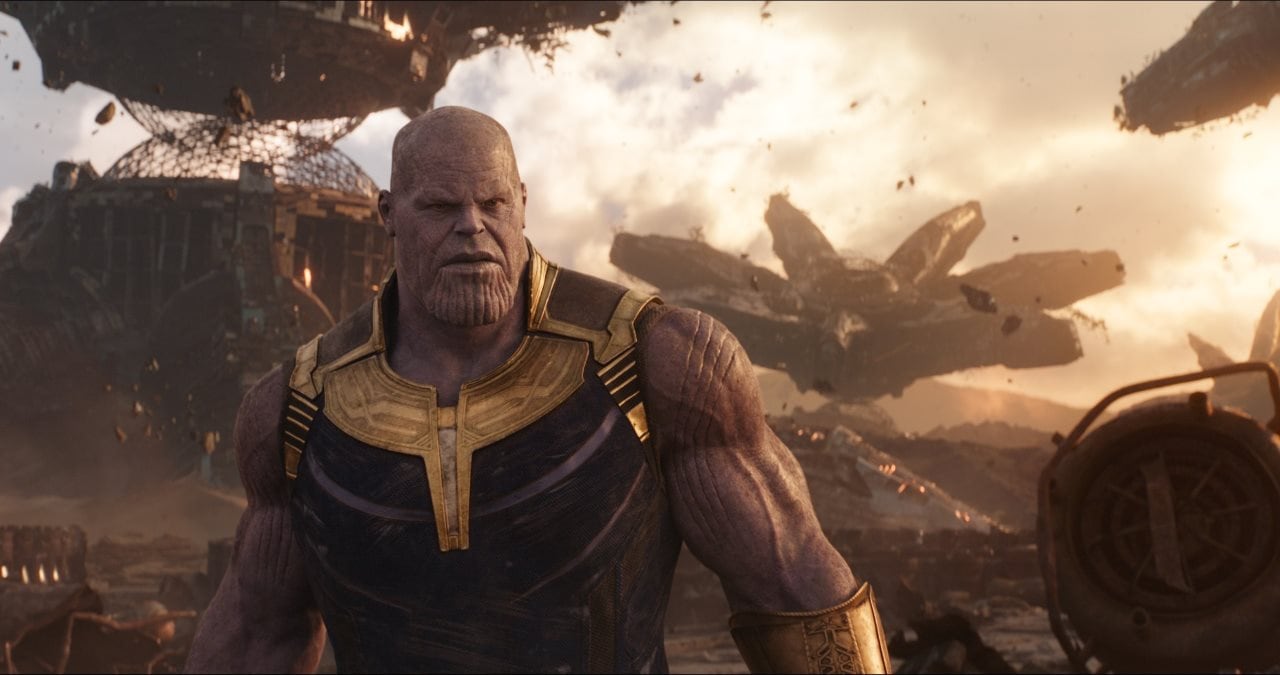 But moment to moment, Infinity War is an exhilarating and shocking ride. When you've so many characters, you also have so many powers and abilities to deal with. Infinity War has a few action set-pieces that involve everyone chipping in with their ideas, especially a showdown with Thanos on his home planet. Those provide the cool comic-book moments fans are eager for, in addition to multiple surprise entrances that garnered the biggest roars at the premiere screening. The action does become a tad generic elsewhere, and there are some problems with visual effects (blue screen work, to be precise) which can be distracting and noticeable especially in IMAX.

And while every character gets a heroic moment, they don’t have equal screen time. It’s not hard to imagine more prominence for Black Panther if Marvel knew about its record-breaking success beforehand. Those are minor concerns in what is otherwise a competent and enjoyable chapter, which remarkably checks most boxes: it's sombre and thoughtful at times, has plenty of laughs and epic moments, and neatly brings together its large ensemble while telling a cohesive story. Best of all, it has what Marvel seemed scared of for a decade: stakes. What follows in 2019 can hopefully live up to that.

Avengers: Infinity War is out April 27 in India and around the world. There’s one post-credits scene, stay in your seat till the end.