Artemis Fowl Movie Review: Next Harry Potter? Get Out of Here

Rudderless and unfaithful, it has no magic of its own.

Ferdia Shaw in and as Artemis Fowl

In 2001, amidst the burgeoning success of JK Rowling's Harry Potter books and with the first movie adaptation on the horizon, Irish author Eoin Colfer unveiled his own young adult fantasy novel in Artemis Fowl. Like Harry Potter, it features a secret magical world that most humans don't know about. Like Harry Potter, its magical creatures maintain their shrouded existence by erasing human memories as and when necessary. But unlike Harry Potter, its titular protagonist is not only a human but has no desire to be a hero. Described as a “little James Bond villain” by the author, Artemis Fowl is a self-confessed criminal mastermind who evolves into an anti-hero and a more sympathetic character over the course of the eight books.

Except that doesn't lend itself easily to the Disney brand. Predictably and unfortunately, Artemis Fowl — directed by Kenneth Branagh (Thor), off a script by Conor McPherson (The Eclipse) and Hamish McColl (Johnny English Reborn) — throws that starting point out of the window. Artemis is still a 12-year-old prodigy, but he hasn't participated in any criminal activities. And that's not the extent of the changes. Artemis Fowl borrows and fuses elements from at least the first three books — the 2001 original, 2002's Arctic Incident, and 2003's Eternity Code — featuring a kidnapping, a resurrection, and the introduction of an archenemy. That makes the Disney+ film unnecessarily convoluted. As a result of which, it feels rushed and is ultimately all over the place.

That also applies to Artemis Fowl's tonal command. Though it's based on a tongue-in-cheek book, Branagh never properly commits to that approach on screen. Most of its silly jokes are borderline slapstick, and it's got the right ingredients in other places too, but Artemis Fowl seems afraid to embrace what it ought to be. It's almost as if Branagh is repeating the mistakes he made with introducing Thor, and you can't help but wonder what the Thor: Ragnarok variant of Artemis Fowl — directed by someone with the sensibilities of Taika Waititi — would have looked like. But as it stands, Artemis Fowl is a rudderless and unfaithful adaptation of a beloved series, one that's been dumped on streaming after being repeatedly delayed.

Artemis Fowl opens by setting up its young protagonist (debutant Ferdia Shaw), who excels at school but also gets in trouble for his lack of respect towards others. There's trouble at home too, with a dead mother (not so in the books) and absent father Artemis Fowl Sr. (Colin Farrell). Thankfully, Artemis has his home, Ireland, described as “the most magical place of all”. Artemis Fowl feels like a love letter to Ireland in the beginning, but the idea is quickly forgotten and never revisited. Soon after, Artemis Sr. is captured during one of his missions — the family's criminal business from the books is turned into a more routine save-the-world operation — and Artemis is tasked by an unseen villain to find and deliver a MacGuffin of sorts in three days.

As he starts to dig with the help of his butler and bodyguard Domovoi Butler (Nonso Anozie, from Game of Thrones), Artemis discovers his father's ties to a magical world. That acts as the gateway to introduce Holly Short (debutante Lara McDonnell), an elven recon officer and Artemis' obvious future love interest, and her 800-year-old boss Commander Root (Judi Dench). Both live in the fairy city of Haven, which lies beneath our feet and is more futuristic than the human one above it. But the world of Artemis Fowl lacks its own identity. Think Harry Potter meets Star Trek, with a mix of elves, goblins, dwarves, and centaurs roaming around in sleek spaceships. There's also a dash of Men in Black in the black suits and sunglasses, and the fairy weapons.

Sadly, the visuals aren't the only generic and rehashed thing in Artemis Fowl. Its unseen villain's plan is as old as time: become all-powerful, wipe out all humans, and take over the world. And by making Artemis plainer than he is in the books, the Disney+ film is robbed of what set apart Colfer's work in the first place. As such, Artemis seems to be the protagonist just because he's human and a boy. Holly is the real heart of the story and deserved to be at the centre of Artemis Fowl. If you're going to make several major changes, this ought to have been one of them. It shouldn't matter what the movie is called. Artemis Fowl also fails to establish their relationship properly, as it goes from full animosity to genuine connection within a few seconds. 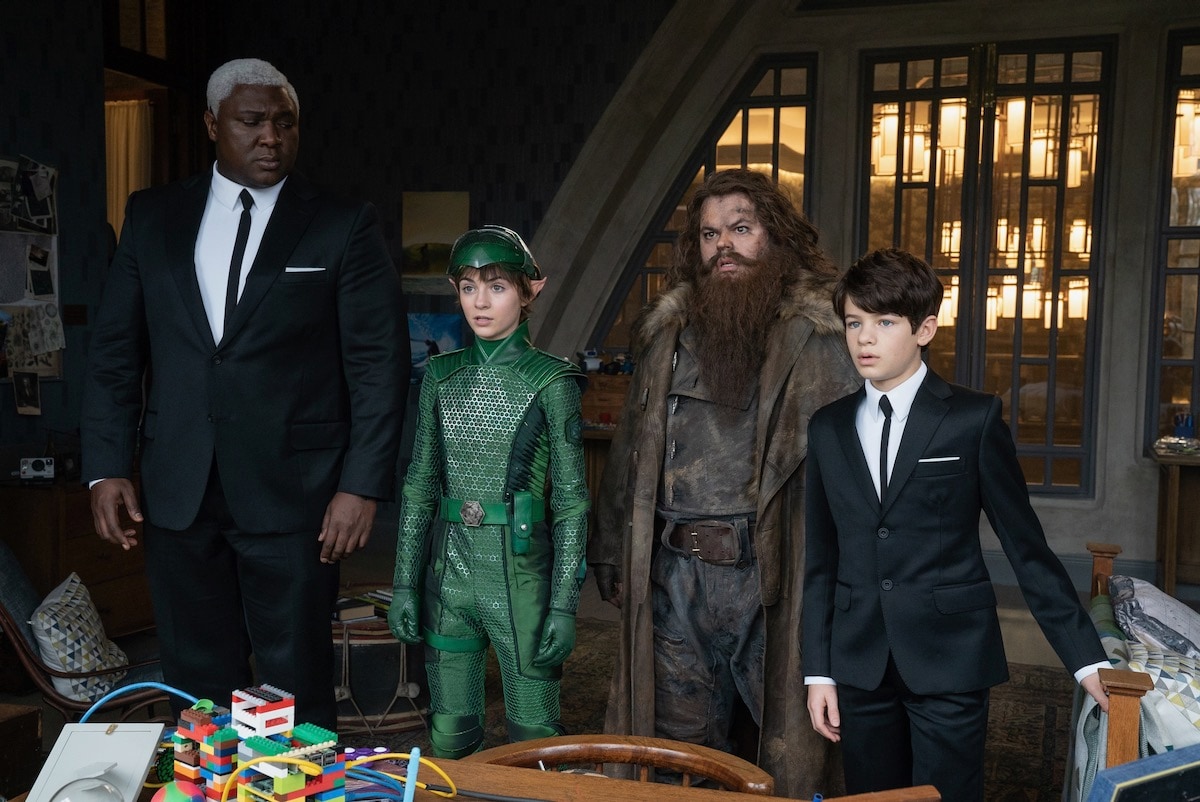 It's the biggest unearned part of Artemis Fowl, but it's not the only one. The father-son Artemis dynamic is as thin as paper. Less than a minute into an attempted heart-to-heart, Artemis says: “What I really want is to believe in you.” The line emerges out of nowhere, with little emotional build-up. When Artemis Sr. takes off on his mission, he recites an “Irish blessing” to Artemis, but it feels entirely out of place. It later turns out to be a clue shortly after, which indicates why it was forced in earlier. And towards the end, there's a gratuitous shot of Artemis heroically walking through wreckage after he declares himself as a criminal mastermind. But we haven't seen him do much honestly. The film makes Artemis say it because that's what he says in the book.

The only enjoyable parts of Artemis Fowl are Josh Gad and the time freeze. Gad (2017's Beauty and the Beast) plays dwarven expert thief Mulch Diggums, and serves as narrator. He is monstrously enjoyable in his role and the only self-aware voice in a movie otherwise too sincere for its own good. And Gad's narration lends a bit of humour to Artemis Fowl, which is made up of drab scenes for the most part. Dench's grumpy Root — you can imagine she would be cursing all the time — could've helped Gad too, were Disney's family-friendly approach not holding the movie back. As for the time freeze, a fairy device that does what it says, it's behind the most visually dazzling part of Artemis Fowl, though it's also meaningless because of the lack of stakes.

A movie adaptation of the Artemis Fowl series had been in the works since the first book launched in 2001. While Harry Potter minted billions at the box office, Artemis Fowl ran into hurdle after hurdle, and languished in development hell. It's finally made it to screen — albeit on Disney+ rather than cinemas, due to the pandemic — as a wannabe-cool fantasy sci-fi action movie that liberally borrows from others that came before it. But it's unable to recreate that magic, and it doesn't have any magic of its own.

Artemis Fowl is out June 12 on Disney+ Hotstar and Disney+, wherever available.

Further reading: Artemis Fowl, Disney, Disney Plus, Disney Plus Hotstar, Harry Potter, Eoin Colfer, Kenneth Branagh
Akhil Arora Email Akhil Akhil Arora covers entertainment for Gadgets 360, interviewing stars such as Christian Bale and Anurag Kashyap, covering series premieres, product and service launches across the globe, and looking at American blockbusters and Indian dramas from a global socio-political and feminist perspective. As a Rotten Tomatoes-certified film critic, Akhil has reviewed over 150 movies and TV shows in over half a decade at Gadgets 360. When he is not completely caught up with new film and TV releases, Akhil ...More
Quantum 'Fifth State of Matter' Observed in Space for First Time
Scientists Press Mammal 'Snooze Button' to Understand Hibernation

product Artemis Fowl movie review: the long-delayed adaptation of Eoin Colfer’s books is a death knell for Disney’s wish to have the next Harry Potter. Artemis Fowl release date is June 12 on Disney+ Hotstar.

Artemis Fowl Movie Review: Next Harry Potter? Get Out of Here
Comment