Aquaman Is Full of Ocean Wonder, but Also Endless Exposition

Jason Momoa as Arthur, Amber Heard as Mera in Aquaman

Comic book movies are a dime a dozen these days, but director James Wan has a lot on his side with Aquaman. Thanks to its unique underwater setting that involves giant talking crustaceans and massive luminescent seahorses wearing battle armour, there are hitherto-unseen visuals at play in the new DC film. The sunken kingdom of Atlantis offers a chance to construct a world based on the designs of elements found only in the oceans. But it's almost as if Wan & Co. were scared there might never be a second chapter and hence tried to cram every facet of the Atlantean world and the Aquaman comic lore into this one. Owing to that, Aquaman runs 2 hours and 22 minutes — and feels a lot longer — as it squeezes in half a dozen stories and landscapes, all of which require an explanation of their own.

Some of the best parts of Aquaman can be found in the last half hour. These involve a sequence with ghastly marine creatures that make great use of Wan's experience and gifts with the horror genre — his credits include The Conjuring and its sequel — and the big CGI fight towards the end that's almost necessary for every superhero movie is special because of its very nature, in that it's set underwater for the most part and includes combatants, vessels and weapons that take after the varied, awe-inspiring shapes and forms of species found in the seas. But Aquaman takes so long to get there, and charts such a boring exposition-driven course that many in the audience would have already lost interest by the time those roll around.

We begin in 1985 on the north-eastern edge of the US, as an older unseen Arthur (Jason Momoa) — already known to the audience as Aquaman from last year's major let-down team-up Justice League — narrates the love story of his parents: his human father Thomas (Temuera Morrison), a lighthouse keeper, who finds his Atlantean mother Atlanna (Nicole Kidman), Queen of Atlantis, washed up ashore one night. Their half-human, half-Atlantean baby is rejected by the underwater kingdom, which forces Atlanna to return to Atlantis and abandon her family to protect them. Arthur grows up on the surface and turns into a reluctant protector as the bulked-up Momoa, using his size, invincibility, and mother's trident to keep any and all threats at bay.

But that's hardly a tiny bit of the overall exposition in Aquaman. The film also has to introduce Atlantis, its history as a glorious, technologically-advanced kingdom ahead of other humans — it's slightly reminiscent of Wakanda from Black Panther — and how it fell to the ocean floor and divided into seven disparate kingdoms. Then it must also explain how Atlantean bodies function, the current political situation and power players — that's where Arthur's pure-Atlantean, half-brother Orm (Patrick Wilson) comes in, who wants to wage war on the surface-dwellers for polluting the oceans and mass hunting — and set up the main quest for Arthur, plus side-characters and subplots that briefly interact, expand its world or are meant to set up future conflicts for possible sequels. There's simply too much of it.

It doesn't help that the two bad guys in Aquaman, Orm and a mercenary named David (Yahya Abdul-Mateen II) — whose turn into the bug-eyed helmet-wearing Black Manta is strongly hinted at in the early running — are uninteresting, dour, and clunkily sketched out. For a film that relies on Orm's racism and bigotry towards Arthur, and needs David's revenge path to feel earned given how he's set up as the next big villain in a mid-credits scene, it's criminal how little care the Aquaman writing team of David Leslie Johnson-McGoldrick (The Conjuring 2) and Will Beall (Gangster Squad) take of introductions and character moments, which are just forced into scenes rather than being organically sewn in.

That self-seriousness stands tonally in contrast with the cheesy lines that are delivered by the same villains — they seem to be addressing the audience as they declare their alter ego personalities out loud in an over-the-top fashion — the “cool dude” one-liners given to Momoa, or the slo-mo heroic shots that make you wonder if Aquaman is being sincere or flirting with being a Deadpool-style parody. It's part fan-service, part Marvel imitation, and part fantasy fulfilment, which strikes at the heart of its intended target audience. The mismatch also extends to the film's visuals at times, with the over-elaborate Atlantean exosuits not only feeling comically out of place but also lacking any Atlantean touch to them. 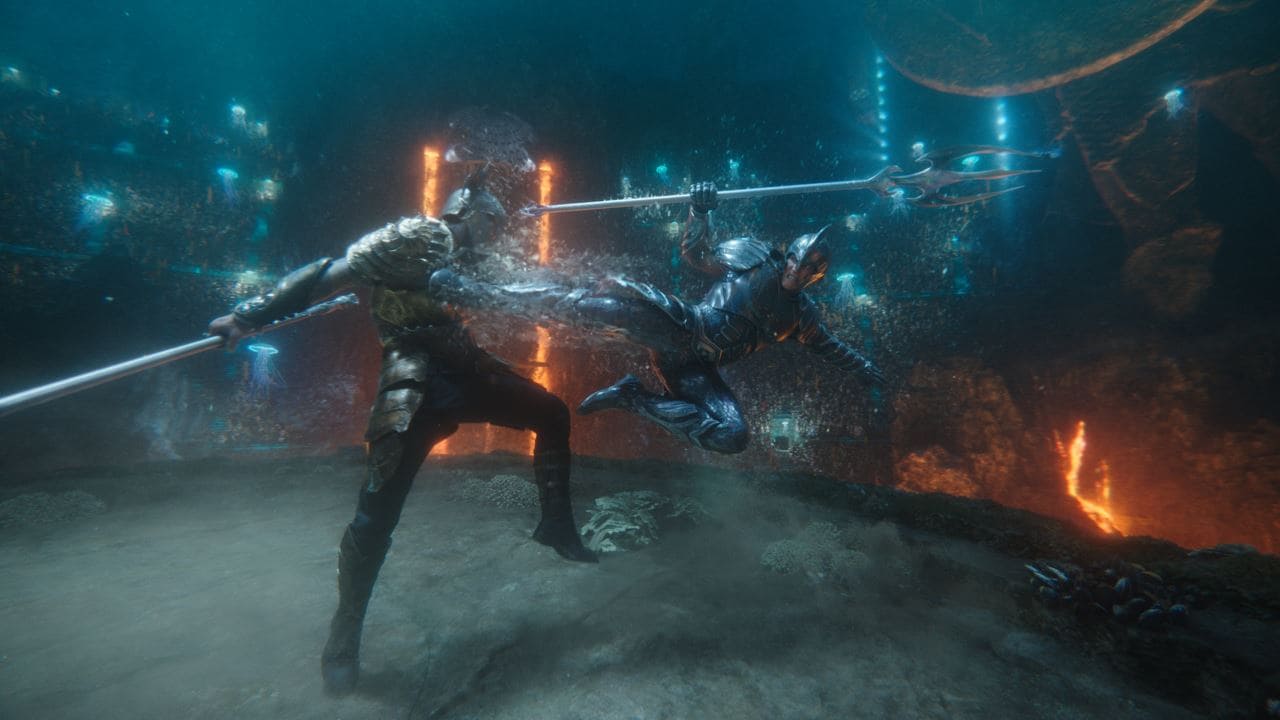 Wan and his cinematographer Don Burgess (Spider-Man) bring a fast-moving fluidity to staging and camera-work on Aquaman, one that makes heavy use of virtual cameras, and scene transitions to blend two separate shots. It makes the film feel like a video game at times — additionally, there's a startling inclusion of AR-style trading cards at one point — as the camera routinely spins around characters, moves in lockstep with weapons, and takes full advantage of its surroundings. Since there's usually no solid ground to speak of underwater, the audience can't track movement along a fixed axis, which allows for a 360-degree rotation that might otherwise induce headaches.

But that can also present a problem for the action unfolding on screen, since the extent of spin, twirl and rapid movement makes it tough to follow the design and structure of a sequence. And there's always an element of artificiality to it, since virtual cameras break how humans perceive the world, which was also a problem with Luc Besson's visually-dazzling yet otherwise empty sci-fi Valerian and the City of a Thousand Planets last year. Action in Aquaman also suffers from that old DC problem of having near-invincible superheroes, who don't get hurt no matter what you throw at them. There are no stakes to what is unfolding most of the time, which is made more unmemorable by Arthur's talents of hitting really hard or flinging heavy objects with a lot of power.

Aquaman is briefly saved by the Indiana Jones-like quest — Wan has previously called it Raiders of the Lost Ark meets Romancing the Stone — undertaken by Arthur and his Atlantean love interest, Mera (Amber Heard), who is betrothed to Orm at the start of the film. The film's central thread revolves around the search for a lost, mythic trident supposedly owned by the first king of Atlantis, which takes Arthur and Mera down to Atlantis, across to the Sahara Desert, and then to Italy's Sicily province. Aquaman is much better off when it stays with the two — Momoa and Heard's banter and chemistry provide the only laughs, though it has its own cringeworthy moments — instead of constantly ping-pong-ing between several threads that keep introducing new factions and backstories. 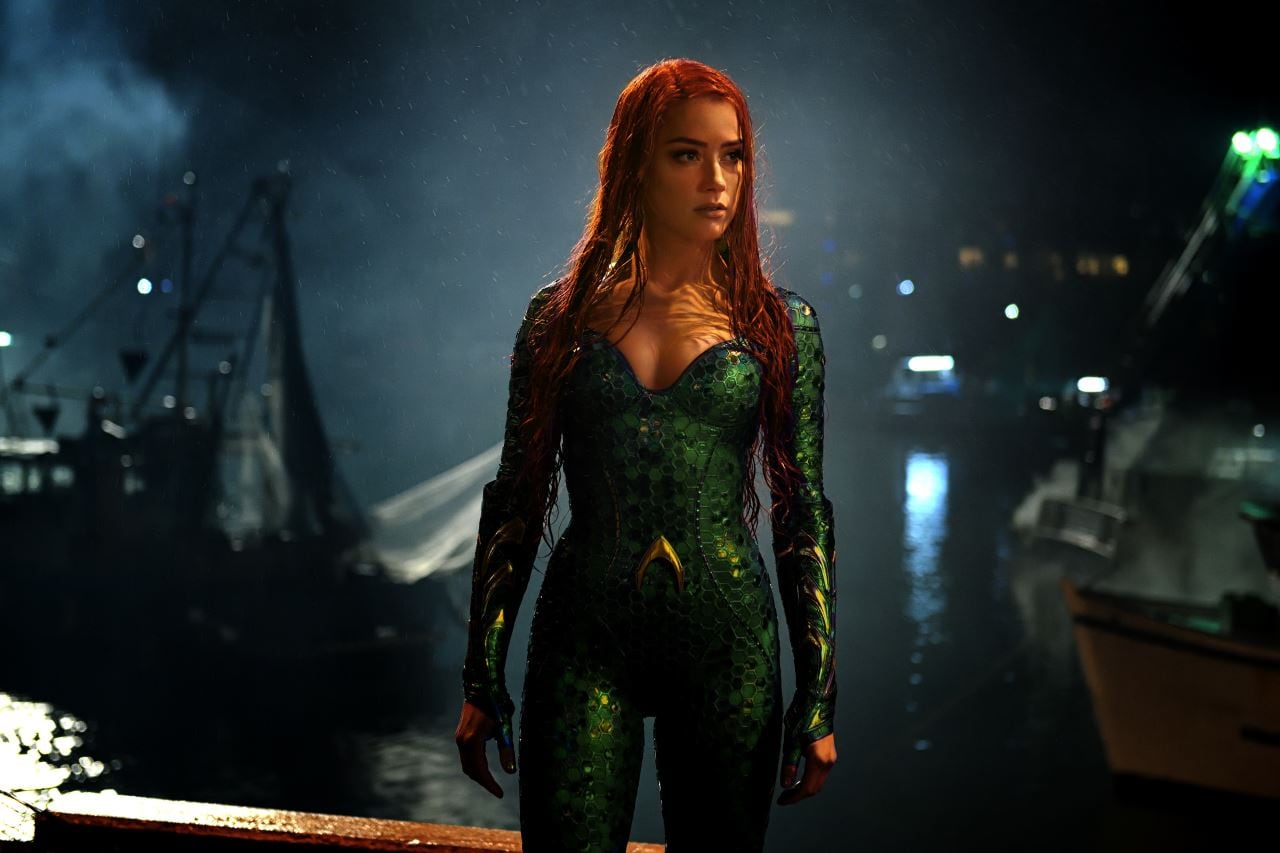 It's a shame then that Mera isn't better developed, given she can hold her own against threats — in fact, her hydro-kinesis powers not only make for better visuals but are also more relatable, fantastical and interesting — and has a lot more smarts than Aquaman himself, who concedes he's a bit of a “blunt instrument” and tends to sign up for things without really knowing what he's getting into or thinking it through. In that sense, Arthur is just like Thor except his stance on the throne is completely opposite, in that he actively doesn't covet it and only challenges Orm because he's trying to save his people.

And though it has some of those deflating moments that made Thor: Ragnarok such a critical and commercial success last year, Aquaman is simply too over-stuffed and over-long. The dynamic between its male and female leads, and the unique visual style of its underwater universe are overshadowed by the excesses around it, leaving behind a film that's as muddled as our oceans today. Aquaman is a lot better than the garbage put out by Warner Bros.-DC over the past few years — excluding Wonder Woman — that has led to reshuffling on flagship properties such as Superman and Batman, but that was always going to be an easy bar to clear.

It's funny that a character that was a running joke on Entourage is now somehow on more stable footing than his much better known superhero counterparts.

Further reading: Aquaman, DC Comics, Warner Bros, James Wan, Jason Momoa, Amber Heard
Akhil Arora Email Akhil
Akhil Arora covers entertainment for Gadgets 360, interviewing stars such as Christian Bale and Anurag Kashyap, covering series premieres, product and service launches across the globe, and looking at American blockbusters and Indian dramas from a global socio-political and feminist perspective. As a Rotten Tomatoes-certified film critic, Akhil has reviewed over 150 movies and TV shows in over half a decade at Gadgets 360. When he is not completely caught up with new film and TV releases, Akhil ...More
Qualcomm Asks Chinese Courts to Ban iPhone XS, iPhone XR Sales
YouTube, Under Pressure for Problem Content, Takes Down 58 Million Videos in Quarter