Gillian Anderson as Media in a still from American Gods

After hitting pause on the main plot last week to explore Laura’s bloody and fascinating backstory, American Gods returned to those threads, and dove headlong into it with the fifth episode, “Lemon Scented You”, which set up the stage for the slowly brewing war between the Old and the New Gods. It also changed how Neil Gaiman had designed events in the book, with a sense of urgency to how events are unfolding.

Note: spoilers below for the fifth episode of American Gods.

We picked up where the two previous episodes had left off, and finally got the anticipated conversation between Shadow and Laura Moon. Even though Shadow was shocked to see his dead wife sitting in his motel room – he throws a pillow at her just to see if she’s real – he’s more concerned with her adultery than the miracle of her being alive. “That’s a pretty significant thing for us to discuss too. And to appreciate,” Laura remarks, and cheekily adds, “I think maybe we should take a moment and do that.” Shadow, though, has witnessed a lot of strange things in the week prior to that, and her rising from the dead is just another one of those things for him now.

Laura then comes clear on how the Robbie fling happened. She knew that her statement - that she'd wait for Shadow - had “the potential of being a lie, but there was a version of events where it wouldn’t be a lie”. Except it did turn out to be a lie, thanks to the wait (13 months), Robbie’s presence, the death of her cat, and wine. There’s a clear contrast between the two characters’ manner of talking and reacting. While Emily Browning’s Laura projects a calm, nonchalant image, Ricky Whittle’s Shadow is tense, hurt, and struggling to make sense of the situation.

After Shadow gets cigarettes for Laura and returns to the room, he finds her in the bathtub, who’s giving herself a warm bath so she wouldn’t be cold to the touch, she says, slyly adding: “In the event you were thinking of touching me. I don’t want you kissing cold lips.” Laura is openly flirting with him, and hoping she can simply return to where they left off when she was alive. But it’s obvious Shadow is in a different place mentally; first, he tells her that he had a feeling she was going to die, and then says he’s not her puppy anymore. 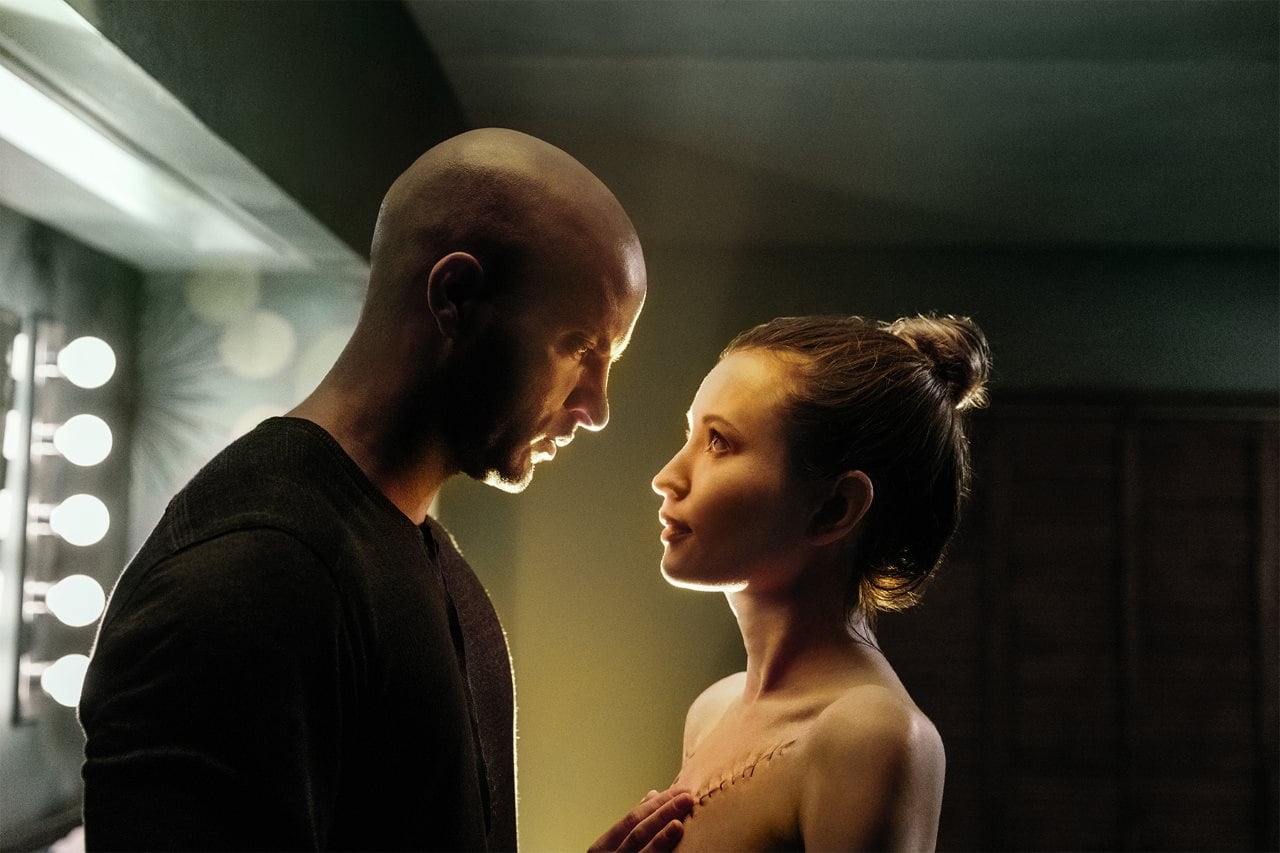 Ricky Whittle as Shadow, and Emily Browning as Laura in a still from American Gods
Photo Credit: Jan Thijs/Starz

Between that, though, there’s a touching moment. As Laura gets out of the bathtub and they share a brief kiss, the light that pulses through and around Shadow in Laura’s eyes travels into her and lights up her heart (excuse the pun), with it seeming to beat and pump for a second. “I felt something. I felt like, live alive,” Laura says. Before they can properly finish their talk, there’s a knock on the door. It’s Wednesday with an invitation for “five, six drinks”, and Shadow’s mind is clearly elsewhere. Their conversation is also rudely interrupted by the arrival of multiple police cars, who haul the two off to the station for the Chicago bank robbery.

Elsewhere, there’s the return of Technical Boy (from the first episode), who’s put in his virtual contraption by Media. Inside the virtual limo, he meets Media (Gillian Anderson) dressed as David Bowie’s alter ego Ziggy Stardust. After lecturing Technical Boy, Media throws in a reference to the infamous Orson Welles’ radio performance of HG Wells’ The War of the Worlds, announcing the attack of the Martians.

Meanwhile, at the police station, Shadow and Wednesday have been placed in separate interrogation boxes. While Wednesday tries the old, confused man image at first, and Shadow just keeps repeating the word ‘lawyer’, the latter’s tune changes after the female detective tells him how they were tipped off about them via a fax machine that hasn’t worked “since fax machines”, from the same company that helped catch Osama bin Laden.

It serves to set up their “extravagant” enemies, as does Media’s second appearance after Wednesday and Shadow are put in the same box to discuss matters. This time, she assumes the guise of Marilyn Monroe, throwing references to her death from accidental overdose, her relationship with President Kennedy, and the use of Technicolor. From the camera angles to the chosen dress, American Gods is selling her quintessential sex appeal, and how she's using it to win Shadow and Wednesday over. 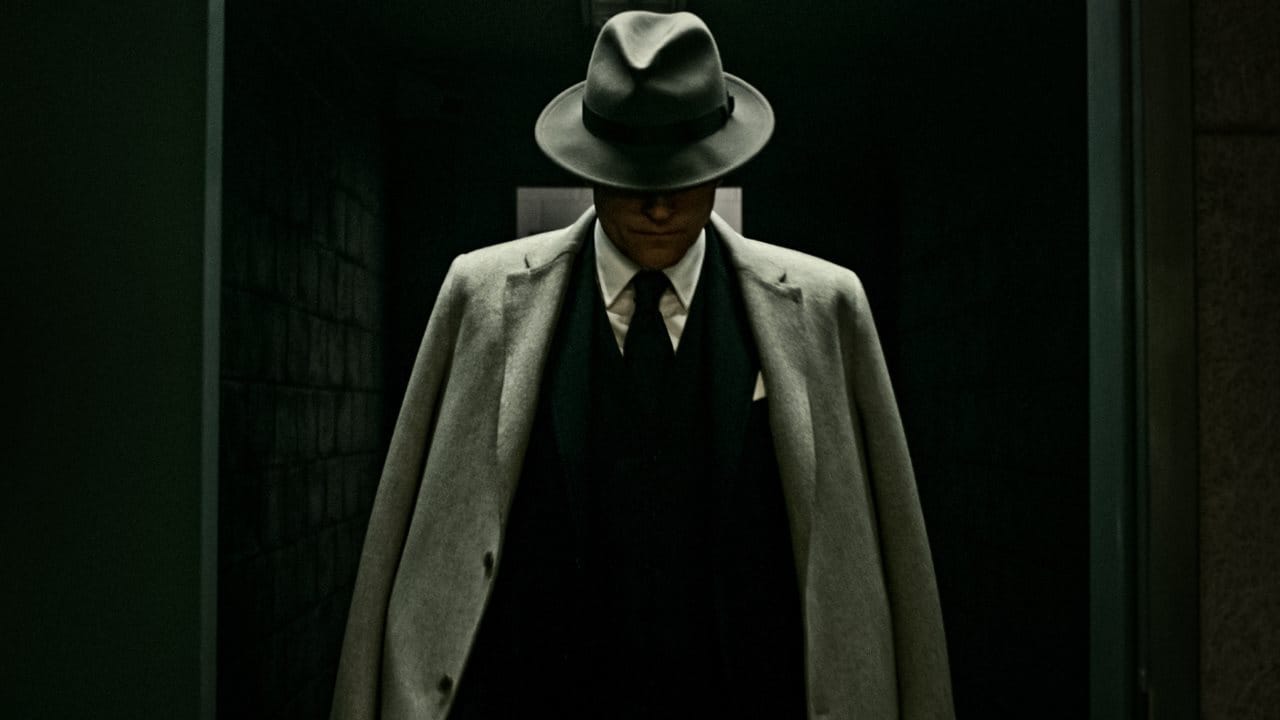 Her entry is only a prelude to what builds up to the show’s big bad, Mr. World (Crispin Glover). Dressed as a member of the elite from the 70s, he offers a small apology to Wednesday for not having seen him for so long, and then introduces himself to Shadow. “I know people. I know everything about all of them”, he says, and then starts listing things about his life most people wouldn’t know, including a CGI rendition of what Shadow’s face looks like when he masturbates.

Back at the motel, Laura is visited by Mad Sweeney who’s still on the hunt for his lucky coin. After his verbal and physical threats (we’ve already seen what dead Laura is capable of) fail to yield results, Laura gets a few answers out of him about Mr. Wednesday, and how Sweeney met Shadow, before telling him that he’ll have never his coin back. Sweeney then lifts her and tries to drown her in the bathtub. Can you even drown someone who is already dead? We don’t find out, though, since the cops come barging through the door and take Sweeney away.

At the station, Mr. World brings in Technical Boy to deliver his apology to Wednesday and Shadow in person, and then lays down an offer. Wednesday questions if they’re offering a truce, to which Mr. World replies that a truce would imply they were ever at war. Think of it as a merger, he adds, borrowing words from Media. The latter then turns the room’s walls into giant screens, showing how they’d upgrade Wednesday’s brand: an Odin missile guiding satellite. 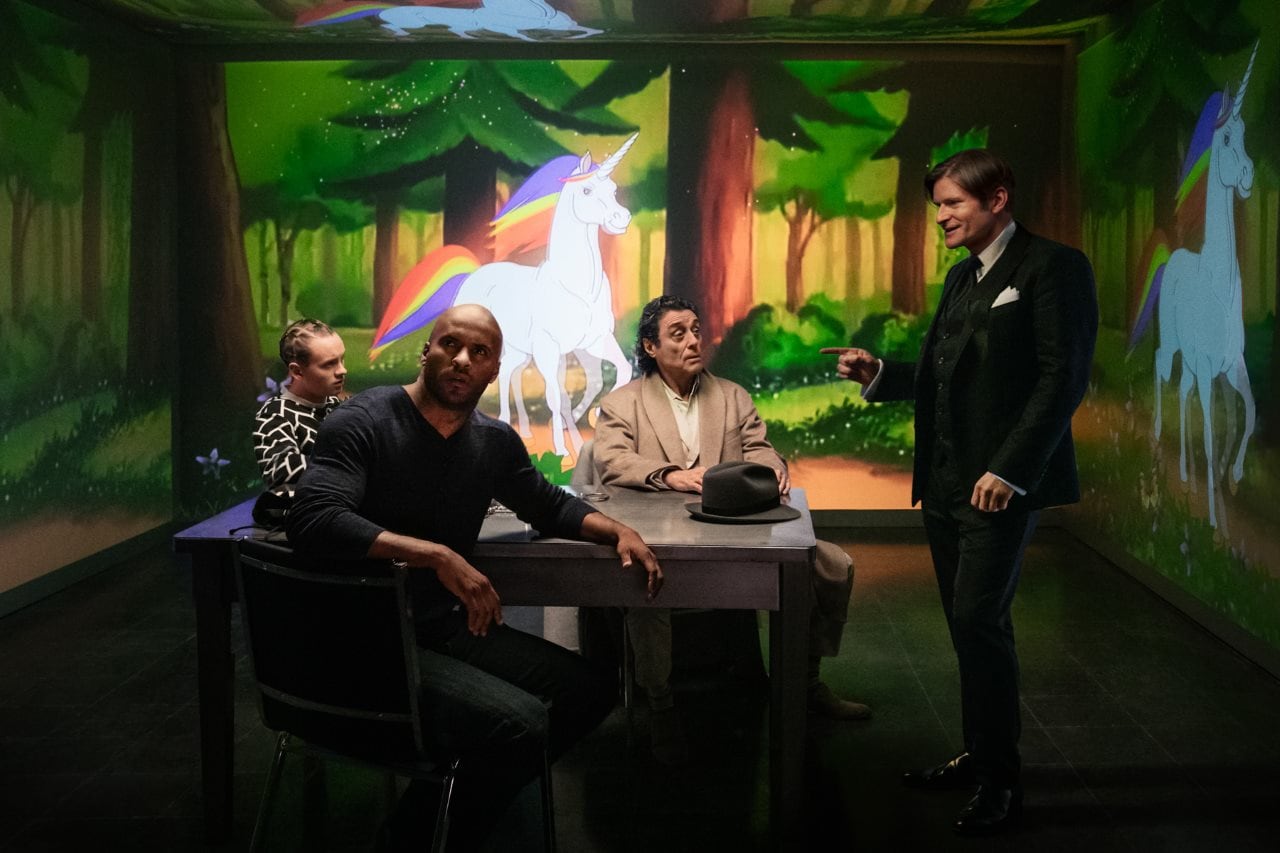 It’ll be launched over North Korea, and grant him the sacrifice of 24.5 million poor souls. It’ll likely lead to many more eventually, which in turn will make Wednesday more powerful than ever, since people look to Gods in their most desperate moments. It also connects neatly into the episode’s opening “Coming to America” prologue, which explored the tale of Nunyunnini. When the priestess Atsula failed to deliver food for her people with her sacrifice, the Native Americans killed everyone and took the children into their tribe. And since the kids hadn’t really grown up with a strong belief in Nunyunnini, the woolly mammoth-headed God disappeared into oblivion.

Wednesday rejects the offer, though. Technical Boy is furious, and wants Mr. World to finish him if he won’t reply in the positive. There’s respect for Wednesday in Mr. World's eyes, and he reprimands the young god. “F– respect,” Technical Boy says, but his misstep costs him two of his front teeth with Media blowing a kiss. The trio leave Wednesday and Shadow as they found them, who make their way through the police station to find a bloody mess.

Unable to go out the front with a car approaching, the two exit from the back, but not before the creepy tree (from Shadow’s nightmare in the premiere) tries to kill him. Though we see an eye pop out in the wood, American Gods is keeping us in the dark as to what it is, for now. Between the involvement of the police and the show of power from the New Gods, it’s going to take a lot of effort for the travelling pair to hide from the latter’s all-seeing eyes.