Netflix's Altered Carbon Is a Bloody Show, Where Immortality Has Killed Humanity

"What if we could live forever?" As a concept, immortality has fascinated mankind through the ages, with everything from religion to science pondering over the idea of what it would do to humans. If we could be freed from ageing and short life spans, would we be more beneficial to society? Altered Carbon, Netflix's new extravagant sci-fi series – arriving February 2 – from Laeta Kalogridis (the screenwriter of Shutter Island and Terminator Genisys) and based on Richard K. Morgan's 2002 first novel in a trilogy, argues the most cynical of perspectives.

In its world, immortality has been achieved by storing human consciousness – your personality, memories and the rest – on "cortical stacks", which are placed at the base of your skull. Upon death, these can be removed and transferred into new bodies, now called sleeves, and you can pick up your life where you left it. The procedure is quite expensive, and only the very rich can afford to keep on living like this. It has allowed them to live for hundreds of years, some amassing massive fortunes, and believing themselves to be superior to everyone else, like Gods.

These individuals are called Meths, a reference to the Biblical figure Methuselah, who lived close to a thousand years. Laurens Bancroft (James Purefoy) is one among them; he's one of the richest people on Earth, which is now just one of many settled worlds. Bancroft is convinced his last sleeve was murdered, so he hires Takeshi Kovacs to solve the case. But Kovacs has been dead for 250 years, which means his stack has been "on ice" since his death. Kovacs is brought back to life on Bancroft's orders, and put in a new body (Joel Kinnaman).

Bancroft chooses Kovacs because he was an "Envoy" in his lifetime, a person with remarkable perception and intuition skills, trained in mental techniques that allowed him to jump into new sleeves and acclimatise faster than most people. This helped Envoys to serve in interstellar military units, and help the Protectorate – an evolved United Nations body that oversees all the settled worlds – keep peace across the universe. But Kovacs is also a former terrorist, who was part of a failed war to end stacking, against the rich and powerful.

And now, he's been "respun" - as people call coming back to life in the world of Altered Carbon - by one of these same Meths. Kovacs of course has no interest in solving Bancroft's murder at first, but with a pardon and a big paycheck on the table, he comes to accept. He starts to attract attention immediately, first from a Bay Area police officer called Kristin Ortega (Martha Higareda), who has history with his new sleeve.

She was originally assigned the Bancroft case, and her failure to figure it out causes friction with Kovacs, who doesn't take kindly to her intrusion. Ortega operates by her own rules in the police force, doesn't let anyone or anything get in her way, and she's a much more interesting character than Kovacs in the early run. The same can't be said of Altered Carbon's supporting female roster, including Bancroft's wife Miriam (Kristin Lehman), who has also lived hundreds of years – the character was written as a femme fatale in the book, and continues in that limited trope during the show – and Reileen Kawahara (Dichen Lachman), Kovacs' sister, whom he grew up with and worked alongside during the failed revolution.

There's also a legendary Envoy called Quellcrist Falconer (Renée Elise Goldsberry), who trained Kovacs and gave him the values that became an integral part of his character. She shows up in visions throughout the show and serves as an internal compass for Kovacs, who is deeply affected and pained by her absence. Also in the supporting cast are Poe (Chris Conner), a centuries-old, highly evolved artificial intelligence that runs a luxury hotel, and Vernon Elliot (Ato Essandoh), an ex-Protectorate Tactical Marine whose wife was imprisoned and whose daughter was killed.

Kalogridis has chosen to be faithful for the novel for the most part, and that means the Netflix series is a hardboiled neo-noir detective show that's more about the unravelling plot, and tons and tons of action. Though Kovacs has been 'respun' to solve Bancroft's murder, Bancroft himself isn't that central to the show, and appears less and less as it moves forward. Other events expand the scope of the story, with the death of Elliot's daughter and Ortega's ex-boyfriend being framed, connected to Kovacs' investigation.

Unfortunately, neither the plot nor the action stay coherent for too long. The storyline keeps packing in event after event, subjecting people to repeated acts of violence (which in turn increases the action), but it's unable to get you to care for its characters, nor make much sense of what's going on. You'll be desensitised a few episodes in, and what makes it worse is that most of the action scenes are too much of the same thing. There is little ingenuity or any attempt to freshen up what is mindless bloodlust. Altered Carbon says its world is unforgiving and brutal, but what does a show achieve by numbing its audience? The characters are also not allowed to have fun at any moment, making it a deadly serious show that can be emotionally draining in the standard Netflix binge-watch method.

Kovacs is also not the most engaging protagonist. His original life makes him a very interesting figure – the flashbacks of his childhood and Falconer's teachings serve to highlight that – but in this new one, his incessant shouts of "I don't care about anyone" get annoying too quickly. The character doesn't feel like an active figure, and he seems to just sulk from one moment into the next. Sure, noir anti-heroes are not supposed to be likeable, but relatable is an important quality for a protagonist, and it's a struggle to feel with Kovacs, even when he's being put under unbelievable torture. And surely if you transport someone 250 years into the future, there's to be some expected fish-out-of-water moments? He's an Envoy and all that, but that's a big time-gap nonetheless. 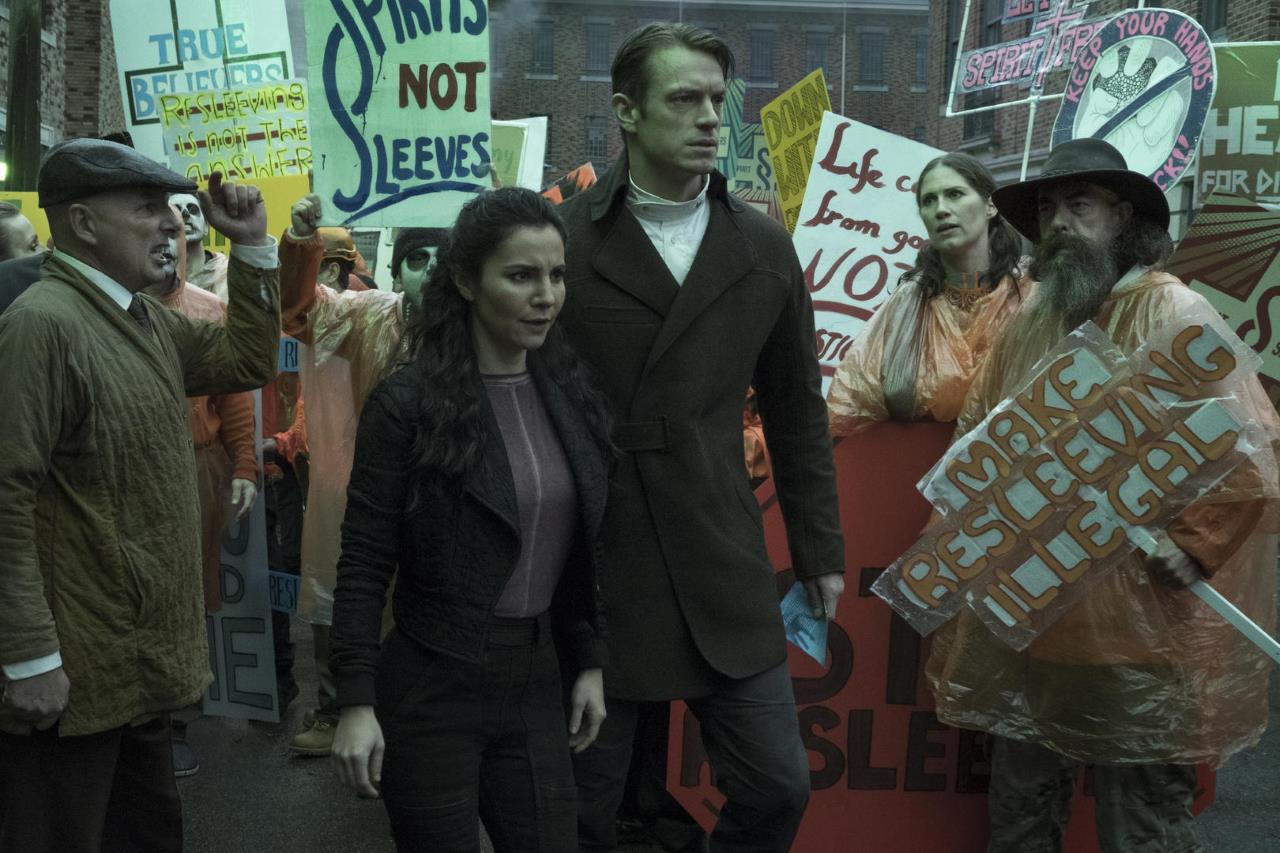 It's the female lead, Ortega, who forms the heart of the show, giving Altered Carbon respite from the despicableness of others. Her incessant need to find answers makes her a much better character to both watch and follow, and Higareda brings a vulnerability to the role that makes her more relatable as well. In fact, there's an argument to be made for basing the show on Ortega rather than Kovacs, though that wouldn't change the dour proceedings around it. Her presence in a corrupt police department, which has been crippled by the Meths' abuse of wealth and rendered justice ineffective, also fits better with the overarching themes of the show.

Those themes and any attempt to comment on them are drowned amidst the copious amounts of violence, though. Even the essence of Altered Carbon, the physical and philosophical quandaries surrounding immortality, are rarely touched upon. The Netflix series is more than happy to be a visually opulent and grimy cyberpunk in parts, depending on what it's showcasing: the homes of the rich, who literally live above the clouds, or the commoners who reside on street level. Morgan invoked rain splattering over neon-lit walls a lot in his work, and the show continues that, seeming like Blade Runner meets Neill Blomkamp's Elysium.

Altered Carbon is a messy adaptation of Morgan's critically-acclaimed novel, and some of that is down to a failure to understand how a hardboiled neo-noir detective novel translates well on screen. Though Kalogridis does well to introduce us to the new concepts and ideas in early episodes, the show loses its grip on matters midway through the 10-episode season. It stumbles from scene to scene unable to bring together its various parts, and has nothing of value to say. Altered Carbon has an expensive sleeve – Netflix reportedly spent $6-7 million per episode – but the stack is missing.

Further reading: Netflix, Altered Carbon
Akhil Arora Email Akhil Akhil Arora covers entertainment for Gadgets 360, interviewing stars such as Christian Bale and Anurag Kashyap, covering series premieres, product and service launches across the globe, and looking at American blockbusters and Indian dramas from a global socio-political and feminist perspective. As a Rotten Tomatoes-certified film critic, Akhil has reviewed over 150 movies and TV shows in over half a decade at Gadgets 360. When he is not completely caught up with new film and TV releases, Akhil ...More
Twitter's Bookmarks Feature Spotted in Android Beta App
Google Announces Patent Agreement With Tencent Amid China Push

Netflix's Altered Carbon Is a Bloody Show, Where Immortality Has Killed Humanity
Comment