Aladdin Movie Review: A Serviceable, Extravagant Remake but Nothing More

Far from a whole new world.

Mena Massoud as Aladdin, and Will Smith as the Genie in the Disney remake

Ever since Disney announced a live-action remake of its 1992 animated musical hit Aladdin, the film has been mired in controversy and criticism, right from its casting choices — Princess Jasmine is played by Naomi Scott, a British actress of Indian descent — to the uncanny-valley effect of Will Smith in the Genie's CGI-crafted blue avatar in the trailers. While there's no getting away from the latter, though Aladdin does its best to keep Smith in his human form for narrative reasons, Disney hand-waved away the former by stating that Jasmine's late mother would be an outsider — in the film, she's said to be the fictional kingdom of Shariabad, an ally of Agrabah — and that its fictional Arabian setting was at the centre of the ancient Silk Road, and hence an amalgamation of Middle Eastern and South Asian cultures.

That's a handy way to cover up for Disney's inability to find a single Middle Eastern actress to do justice to Jasmine's beefed-up part on Aladdin, where she is more vocal about her desire to be the first female ruler and has one new middling song written by the Oscar-winning La La Land duo of Benj Pasek and Justin Paul. (She was supposed to have a second that would have been a duet, but it was cut from the film.) And for what it's worth, Aladdin extends that argument on screen from a visual standpoint, with the palace of Agrabah and the Princess' dresses borrowing heavily from South Asia, in addition to an infusion of a Bollywood flavour into her dances. But that is also precisely the problem for Aladdin, in that its cultural exploration begins and ends with the production department.

Hollywood setting its films in a different world, in this case an Arabian fantasy, has always been a goldmine for cultural appropriation and insensitivity. For all the nostalgic love and praise reserved for the animated original, Aladdin popularised negative stereotypes and featured a highly controversial lyric. But that was 27 years ago. You would expect a film made today to be more self-aware. Unfortunately, Aladdin doesn't make any meaningful effort to depict the Middle Eastern way of life. Though a few characters are shown to be wearing skullcaps often worn by Muslims, anything that resembles Islam is conveniently left out from the film. There aren't even any Muslim platitudes here, which were used extensively in the original text that Aladdin is based on.

It's not as if the use of a traditional greeting or a region-specific word such as Shehzadi, Urdu for ‘Princess', would suddenly make Aladdin a richer film. Not that it would have occurred to the film's all-white writing duo — Guy Ritchie (Sherlock Holmes), also director, and John August (Big Fish) — who couldn't be bothered to use the female royal title of Sultana when Jasmine discusses her ambitions, instead of the male version, Sultan, that is used by her unnamed father (Navid Negahban). Of course, if Aladdin was really interested in the nuances of its fictional Arabian setting, it would have the sense to bake Scott's Indian heritage into the narrative — say, by portraying her as an immigrant — and do more than just hint at the cultural mix of the kingdom.

As it is though, the new Aladdin is a bland love story, peppered with visual and aural extravaganza, which charts a plot that is pretty much beat to beat from the animated original, aside from a few minor tweaks and surprises. When we first meet Aladdin (Mena Massoud), he is a kind-hearted thief living on the streets of Agrabah, who saves an in-disguise Jasmine from a displeased street vendor with his quick-handedness and parkour abilities. It's immediately clear that the two are falling for each other, especially after he pays her a secret visit in the palace. But their courtship is cut short after Aladdin is captured by the palace guards loyal to Jafar (Marwan Kenzari), the villainous Grand Vizier of Agrabah who is plotting to overthrow the Sultan, and is taken to the desert to retrieve a magic lamp.

Inside the Cave of Wonders, Aladdin predictably meets the Genie (Smith), who launches into a song-and-dance sequence — a new riff on the popular “Friend Like Me” — after he finds out that Aladdin doesn't have a clue what blue-coloured, cloud-shaped creatures like himself are capable of. For the first half-hour, Aladdin coasts along as a charming ride that features Aladdin's rather-helpful pet monkey Abu (voiced by Frank Welker), Jafar's parrot Iago (Alan Tudyk) that says the most obvious things, and Jasmine's Bengal tiger Rajah (Welker), which keeps being mistaken for a cat by everyone and is essentially set decoration in the film. But the Genie's introduction brings a much-needed zest to Aladdin, with Smith imbuing the role with panache and joy. 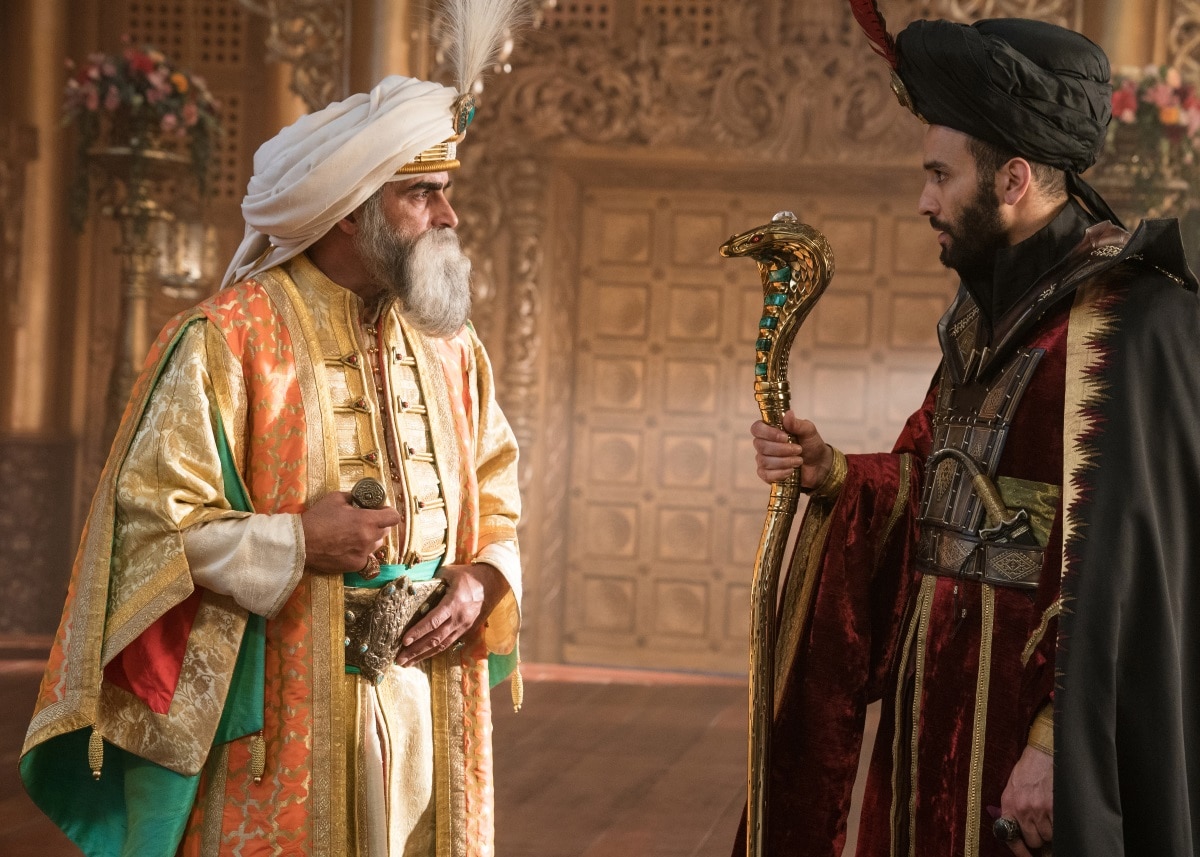 Naturally, it's a fool's errand to compare Smith's take on the role to the late Robin Williams' in the animated original, given the differences in their background — scripted comedy vs improv — and the material and the medium he has to work with here. But it doesn't help that Smith repeats dialogues and lyrics verbatim at times, which is bound to cause déjà vus for a subset of the audience. And for all of today's technological prowess, live-action feels stifling and artificial as opposed to animation when it comes to letting the Genie run riot, with the musical set-pieces unable to capture the same magic that the 1992 original is known for. That said, Smith is the reason Aladdin is mostly enjoyable during its middle third, with none of Scott, Massoud, Negahban, and Kenzari given enough to work with or able to generate a spark.

Largely speaking, the problem lies with the writing. Scott may have a bigger presence in Aladdin but she still feels shackled by a traditional romance. A smarter film would have disrupted that narrative by giving her more agency, say in seeing what Jasmine would do with the magic lamp. For a studio that is slowly embracing the problems espoused by fairy tales — see Frozen — it's a shame that progressive streak isn't carrying on. Though Massoud is convincing as a “street rat” out of his depth posing as royalty in Agrabah, the script doesn't do him any favours with the unexplained character turns he's meant to deal with. And the roles of the Sultan and Jafar are stoic and hence do not afford much room for the actors to display their potential. (Watch Legion season 2 to see what Negahban is capable of.)

Entertainment, like sport, can be a great way of building bridges that helps resolve differences and unites cultures. Aladdin shouldn't have to bear that burden but it does have that responsibility, and the potential, if it had chosen to wield it. As arguably the most popular tale from the collection One Thousand and One Nights — the Disney version is a mix of the folk tale and elements from the 1940 British film The Thief of Bagdad — Aladdin has cultural cachet around the world. It's huge in India too, where the first Aladdin adaptation was made over 90 years ago. Were Disney interested in something other than a cynical cash-grab, that entertains children with music and dance for a couple of hours and later hopefully sells some merchandise, it could have done well to hire writers who have a deeper respect for Middle Eastern cultures.

Aladdin is out now in cinemas in India and other parts of the world.

Further reading: Aladdin, Disney, Will Smith
Akhil Arora Email Akhil
Akhil Arora covers entertainment for Gadgets 360, interviewing stars such as Christian Bale and Anurag Kashyap, covering series premieres, product and service launches across the globe, and looking at American blockbusters and Indian dramas from a global socio-political and feminist perspective. As a Rotten Tomatoes-certified film critic, Akhil has reviewed over 150 movies and TV shows in over half a decade at Gadgets 360. When he is not completely caught up with new film and TV releases, Akhil ...More
Google Now Lets Users Order Food via Search, Maps, Assistant
Qualcomm Leans on Appeals, Trump Help to Reverse US FTC Order

product Starring Mena Massoud, Naomi Scott, and Will Smith, Disney’s 2019 live-action remake of Aladdin follows the plot of the original movie beat for beat, while adding nothing new from a cultural standpoint.