Lemony Snicket's A Series of Unfortunate Events, a new family thriller based on a series of books, is very particular about how it is intended to be seen by its audiences: a chilling adventure full of terrible events that befall the three Baudelaire children, which viewers should avoid at all costs. It's fitting that the opening song, delivered by Neil Patrick Harris, playing the role of evil, scheming, yet at times oblivious to his own faults Count Olaf, is aptly titled Look Away, and finds him crooning in a fourth-wall breaking fashion, "The show will wreck your evening, your whole life, and your day."

It's an ingenious setup to entice the audience, and the show happily winks at tangential happenings too, such as how long-form storytelling trumps movies – a dig at 2004's A Series of Unfortunate Events film with Jim Carrey – and even pointing out the comfort involved in staying home, which is a sure-fire nod towards Netflix.

Even the narrator, Lemony Snicket - the pen name of the books' author Daniel Handler - played here by Patrick Warburton, continually emphasises (and apologises for) the tragedies that we shall be treated to. Appearing in various scenes – out of the corner of the frame or from underground, Warburton’s Snicket routinely informs us of how things are going from bad to worse for the Baudelaires, the real motives of characters, and even sometimes what’s about to happen. The presenter effect can wear thin sometimes, and come across as a cheap way to dump all the exposition on the audience's heads, but when it works – in one beautiful case where he explains dramatic irony with the use of dramatic irony – it’s rather fun to take in.

At the core of the show are the three aforementioned children, the Baudelaires, as everyone is only too happy to refer them as. There's the eldest Violet (Malina Weissman), whose resourceful and ingenuity with tools is a remarkable gift, and her steadfastness to be unperturbed by obstacles worth applauding. The middle child, only slightly younger, is Klaus (Louis Hynes), a boy with a voracious appetite for reading and grasping anything that you throw at him, even subjects that may put off many an adult, such as nuptial law. That leaves the infant Sunny (Presley Smith) with extra-strong teeth, who might seem more as a prop to dial up the adorable meter and physical humour counter, but ends up being a delight on occasions. 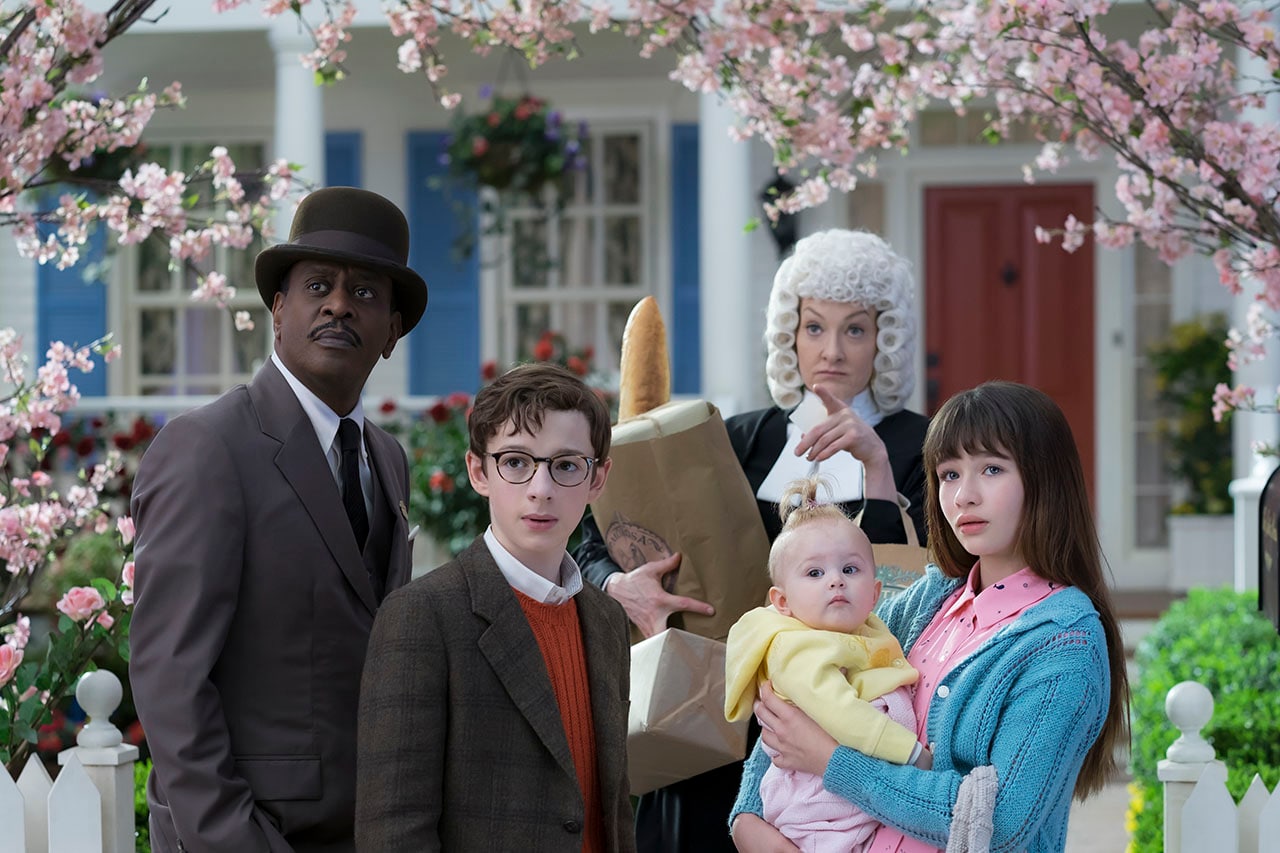 The show’s setup goes like this: The Baudelaire children are enjoying a day at the beach under grey skies. You might think that odd, but it’s perfect for them as a gloomy day means they get the entire beach to themselves. It also sets the tone for the rest of the episodes, one in which our young characters find something to relish despite the poor circumstances. The three then indulge in a bit of stone skipping, one they have customised to suit their fancy: Sunny helps create a flat stone out of a rock, Klaus provides the right angle (not 90-degree, but the other right) for the throw, and Violet retrieves the stone after the throw with the help of a home-made device.

The happy time is cut short by the arrival of a perpetually-coughing man, Mr. Arthur Poe (K. Todd Freeman), who informs them that their parents have perished in a house fire. Poe is the banker in charge of the Baudelaire estate, and hence the man responsible for their guardianship. With the eldest of the three – Violet, aged 14 – still years away from becoming an adult, they must be housed with a relative that can take care of them. Enter Count Olaf (Harris), who hatches a plan the moment he learns of the accident – to take control of the Baudelaire fortune, by hook or by crook.

That sets in motion a series of unfortunate events, to borrow from the words of Lemony Snicket. The show has an otherworldly feel going for it, inspired what it seems from the world-building values of Tim Burton (Edward Scissorhands), mixed with the aesthetic of the films made by Wes Anderson (The Grand Budapest Hotel). To go with that flow, it’s even got a bunch of eccentric characters – from Joan Cusack playing a caring, friendly career woman Justice Strauss, who never had a family of her own; Aasif Mandvi as Dr Montgomery Montgomery, fondly known as Uncle Monty, a herpetologist whose full name is the made the butt of repeated jokes; and Harris’ Count Olaf, who relentlessly chases the Baudelaires with the help of his theatre troupe, a bunch of oddballs themselves. The show even makes a running joke out of the adults failing to recognise people in disguises, see through the scheming, or missing out completely on words, though this plot device does start to wear thin after a point. 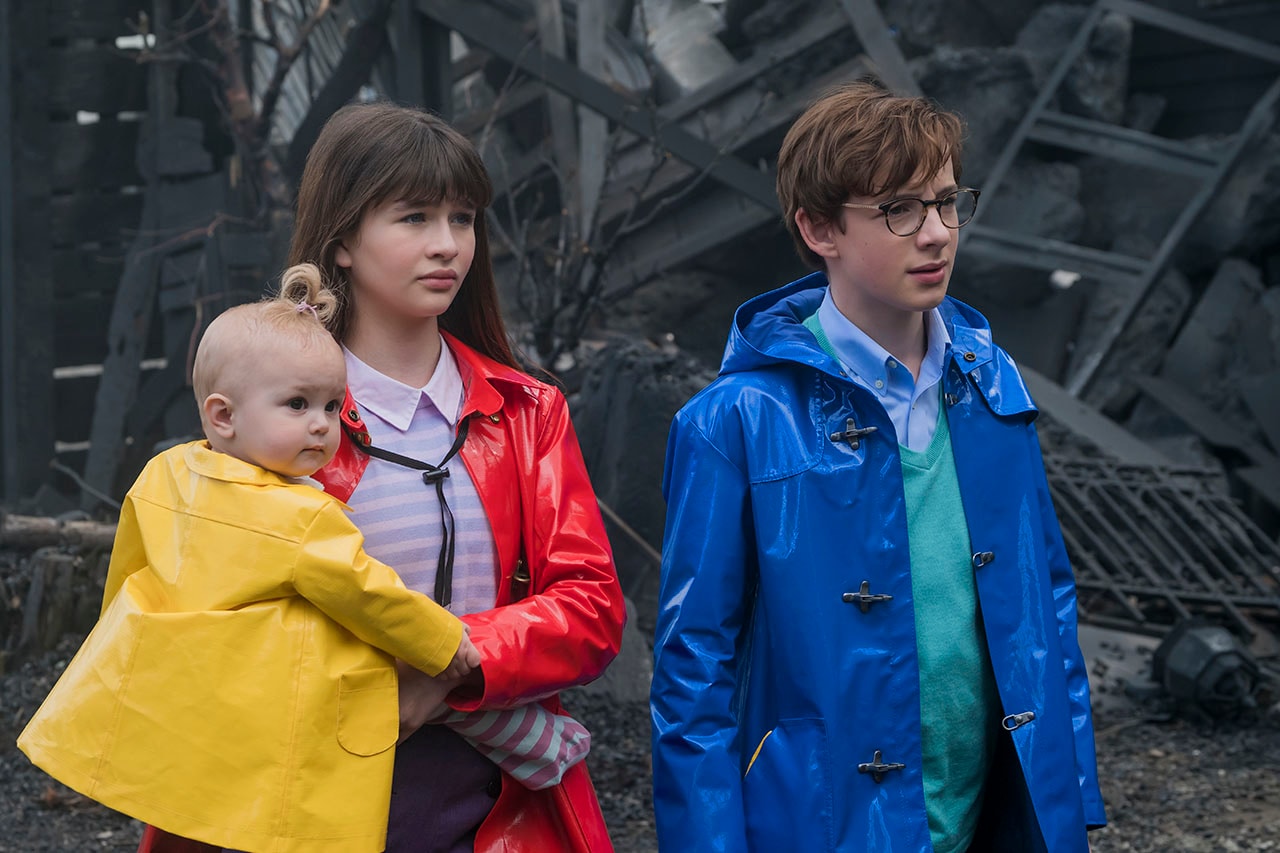 As for the child actors, both Weissman and Hynes are watchable in the mannerisms they are allowed to display, and cleverly balance the sophistication of their upbringing with a charm, innocence and spirit that children possess. While most of the adult characters pull off the roles they are given, the toughest task falls to Harris, who must navigate and balance the evilness of his character while sprinkling a dose of goofiness to fit the show’s tone. It’s a task that Harris only barely manages, through a combination of costumes, accents, song and dance numbers, and a weak grasp of language concepts – the latter of which lights up in a two-part debate over the difference between ‘figuratively’ and ‘literally’.

Handler (credited on the show as an executive producer) seems to have a knack for such topics – books are after all a great way of enriching one’s vocabulary, especially for children – and the show continues that tradition nicely. Many a time, the adults in A Series of Unfortunate Events will explain the meaning of a word, only for either of Violet or Klaus to retort with ‘we know what it means’. That works on two levels, as it not only displays the well-read minds of the Baudelaire children, but also helps young readers build their vocabulary, without talking down to them.

But that’s hardly the only lesson for children in the new Netflix series, co-written by Handler himself, and partly directed by Barry Sonnenfeld (The Addams Family films). Whenever the Baudelaires find themselves stuck in a new unfortunate situation that everyone else seems to be ignorant of, they take things into their own hands, again and again. Through the use of hard logic, reasoning, and calculated deductions, Violet and Klaus offer up their findings in a sound fashion to the oblivious adults. They’re also never afraid to get their hands dirty, although it’s book knowledge that usually comes to their rescue.

Also, unlike the adults, they don't get frustrated or angry at the situation, and instead approach their miseries and the general buffoonery around them with kindness, respect and curiosity, no matter what new hell is thrown at them. This message for children is one of the best features of A Series of Unfortunate Events, and what makes it a fortunately timely addition to our culture.

The entire first season of Lemony Snicket’s A Series of Unfortunate Events, worth eight episodes in total, will be available on the streaming service Netflix Friday, January 13.

Further reading: A Series of Unfortunate Events, Netflix
Akhil Arora Email Akhil
Akhil Arora covers entertainment for Gadgets 360, interviewing stars such as Christian Bale and Anurag Kashyap, covering series premieres, product and service launches across the globe, and looking at American blockbusters and Indian dramas from a global socio-political and feminist perspective. As a Rotten Tomatoes-certified film critic, Akhil has reviewed over 150 movies and TV shows in over half a decade at Gadgets 360. When he is not completely caught up with new film and TV releases, Akhil ...More
Nintendo Switch Pre-Order Date Announced; Price, Release Date Revealed
HTC U Ultra, U Play With Sense Companion Launched: Release Date and Specifications