Rogue One: A Star Wars Story Is the Franchise's Guardians of the Galaxy

Rogue One: A Star Wars Story (releasing this weekend in India and around the world) is a small movie set around a single commando mission - a far cry from the generations spanning saga told in the main entries of the franchise. So it's kind of ironic that there might well be more pressure for the film to succeed than any other in the series.

As a mainline sequel, there was little to no doubt that Star Wars: Episode VII, The Force Awakens, would be a big hit. It didn't hurt that the movie was really enjoyable, even if it was in many ways a paint-by-numbers retread of the original series. The fact is that the filmmakers played it really safe, and beyond picking up story beats from the original movie, also filled it up with all the familiar characters.

Leia Organa plays an important part in Episode VII, while Han Solo and Chewbacca are prominently featured through a large part of the film. Admiral Ackbar shows up, and so do C3PO and R2D2. The might be overshadowed by BB8 here, but these old droids are shown prominently to keep the nostalgia flag flying. The primary antagonist of the movie, Kylo Ren, also has a connection to our protagonists, and the entire movie is about finding Luke Skywalker. 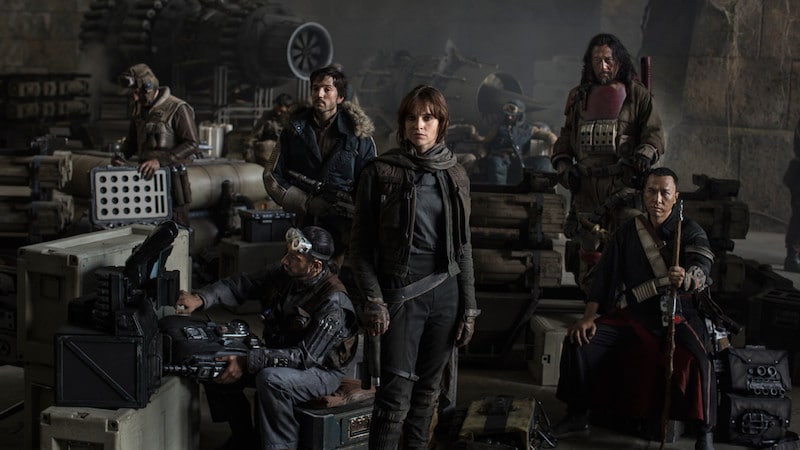 On the other hand, although some familiar faces are making their way to Rogue One as well, for the most part we will be treated to an all new cast. The last time we saw so many unfamiliar faces was in The Phantom Menace, and we all know how that turned out.

(Also see: Who Is the Worst Star Wars Movie Character? It's Not Jar Jar Binks)

Though it's pretty much inevitable that Rogue One will have an amazing opening weekend at the box office, it doesn't come with the built-in guarantee of billions associated with the release of Force Awakens. Unfortunately for the movie, it's also the first of the Star Wars Story spinoffs. The work on these spinoffs will happen in parallel to the main franchise, so that one Star Wars movie can be released each year, without having to rush the development of either set of films. But Rogue One has to prove whether the idea has merit or not.

The last time we saw this kind of pressure on a movie that was related to a money-printing franchise, it was Guardians of the Galaxy. The movie put together a number of disparate characters that no one had really heard of, some of whom were genuinely weird. Rocket Raccoon and Groot might have been played by famous actors - Bradley Cooper and Vin Diesel, respectively - but on-screen, they're a rabid rodent and a (barely) talking tree. This was the movie where everyone expected the Marvel juggernaut to finally stumble, and instead it delivered one of the best films in the Cinematic Universe. Disney (which owns Marvel), is in the same kind of place again, as it has to deliver a hit out of a movie that has none of the advantages that the other titles in the lineup were blessed with.

If it can pull this off, then we've got a full lineup of Star Wars Story movies to look out for over the coming years - but if Disney stumbles with this movie, it could end up tempering expectations, and putting the focus more on just the main-line movies. Whether that's a good thing or bad is up for debate.

Trailers are looking very promising, but we'll know by the end of this week whether this movie will end up being the equivalent of Guardians of the Galaxy, or if it will go the way of Suicide Squad, a damp squib that even fans struggle to defend.

Further reading: Star Wars, Rogue One, Death Star, Guardians of the Galaxy, Suicide Squad, Disney, Marvel, Expanded Universe
Gopal Sathe Email Gopal Gopal Sathe is the Editor of Gadgets 360. He has covered technology for 15 years. He has written about data use and privacy, and its use in politics. He has also written extensively about the latest devices, video games, and startups in India. Write to gopal@ndtv.com or get in touch on Twitter through his handle @gopalsathe with tips. More
Moto M India Launch Set for Today: How to Watch Live Stream
Apple Said to Be in Talks to Invest $1 Billion in SoftBank's $100 Billion Tech Fund

Rogue One: A Star Wars Story Is the Franchise's Guardians of the Galaxy
Comment