How Legion Redefined the Look of Superhero TV

With a post-credits scene that delivered a doozy of a cliff-hanger, the FX superhero drama Legion – loosely based on the X-Men comic book character created by Chris Claremont and Bill Sienkiewicz – disappeared off our screens for the time being. The season finale continued the practices and trends imbued by its creator and showrunner, Noah Hawley, an Emmy winner for his captivating work with crime drama anthology Fargo.

Over the course of eight episodes, Legion – following a powerful mutant called David Haller (Dan Stevens) – has given us some extraordinary visual flourishes, thanks to Hawley’s vision. It has reinvigorated the superhero genre – tired due to the sheer abundance of content that gets regularly churned out by half a dozen studios – while pushing the envelope on what was thought to be possible on limited TV-style budgets. At the same time, its insistence (again part of Hawley’s vision) for the narrative to proceed at a glacial pace, or even meander, has worked like a double-edged blade.

Ultimately that has resulted in an uneven show – one that holds you while you’re watching it, but doesn’t necessarily leave you with the desired pay-off. When Legion started airing back in February it held promise of something much more, keeping audience bedazzled, almost as if in a trance. As the layers were slowly peeled away, and then followed up by a giant expository sequence midway through the seventh episode, it became clear that the core plot didn’t have that same pizzazz.

But owing to its daring creative mind, Legion is still one of the freshest entries on television in some time, as Hawley and his crew bring out all the possible film-making tools that are available for use.

Note: Spoilers follow, about certain plot points from the season.

Top of that list is the show’s nearly-enchanting use of colour to paint the story. By bathing scenes entirely in one shade, it not only sets a mood and makes it other-worldly, but uses it to enhance the story being told in the first place. In other places, Legion makes things visually arresting by either placing dominant colours, such as a blood red table, against monochromatic backgrounds; or using bright pastel colours (for clothes) against otherwise dark and gloomy backgrounds. 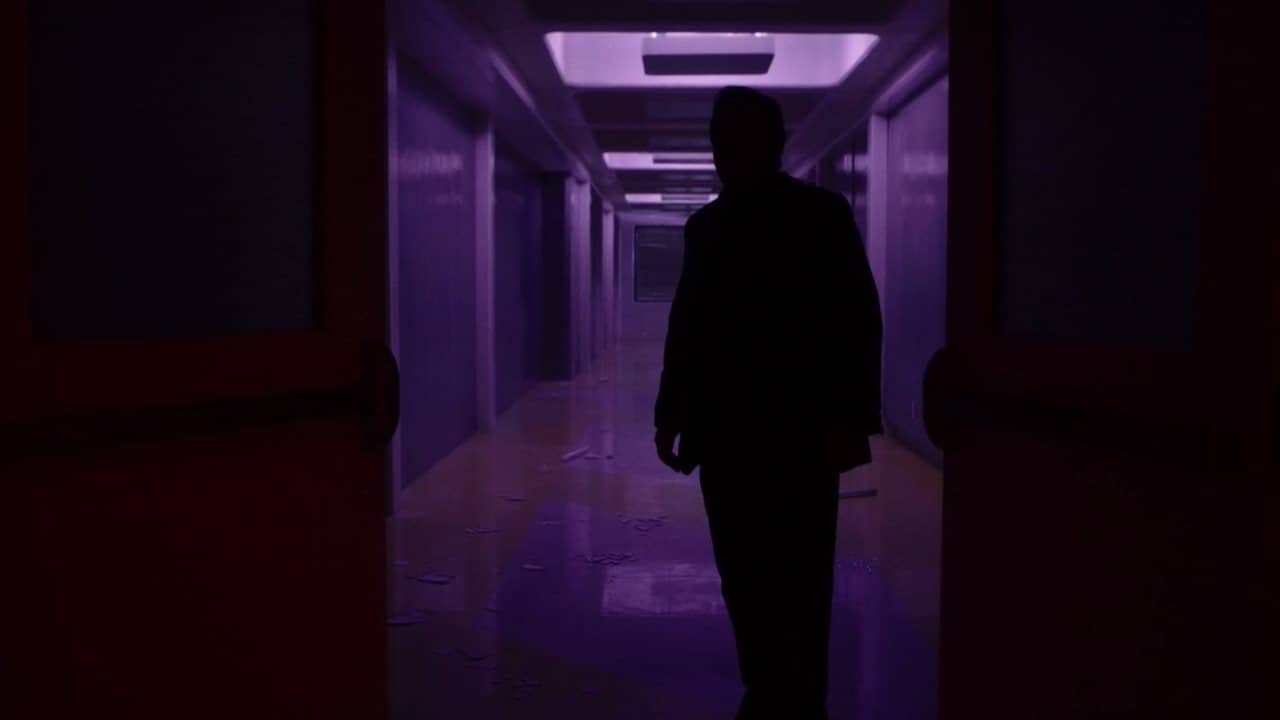 The tactic is partially borrowed from its source material – comic books, in general – where a good colourist can make or break how readers perceive things. With film-making, the burden isn’t that heavy, since it’s down to the performance of the actors for the most part. But intelligent production and costume design, in combination with camera-work, can tell a story without even saying anything - something Legion does quite a bit of, and well.

As an example, after Lenny/ Shadow King (Aubrey Plaza) attaches itself to Oliver Bird (Jemaine Clement) at the end of the finale, Plaza's outfit shreds its despondent image that was symptomatic of David’s psyche, which had become increasingly antagonistic with Lenny’s parasitic nature over time. Instead, it takes after Bird’s own image – that of a free-spirited and exuberant man – and borrows straight from the swinging sixties, replete with a hot pink lipstick.

Another aspect of film-making that Hawley loves to experiment with, is cinematography. From varying lenses, perspective change, composition, to shot length, Legion tweaks and plays with every possible angle. Throughout its first season, the show tends to make use of super-wide lenses to bring a sense of surrealism and eeriness to scenes. In some places the camera is thrust into people’s faces or objects in the environment; in others, the wide lens brings in a lot more of the surrounding room.

Whatever the case, Legion has a love for symmetrical compositions, which are separated using – you guessed it – colour. This could depict the difference in emotional state between two characters, or who they are as people. In one scene, David and Syd (Rachel Keller) are positioned on either side of an L-shaped wall (see below), with orange and blue hues signifying that barrier. 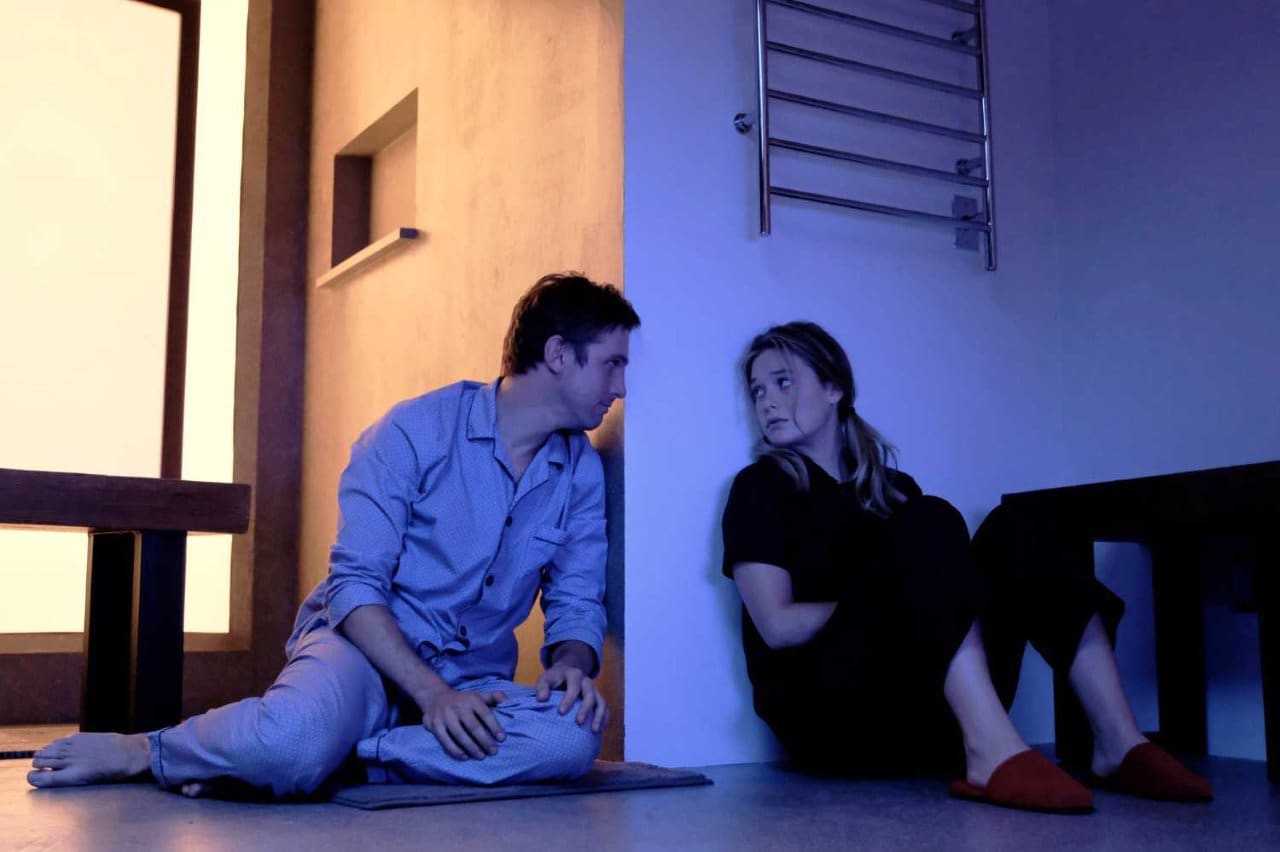 There’s also a lot of Steadicam operation, and a tendency to elongate the shot, using both traditional means, and VFX-enabled ones. It holds you in the moment, and lets it flow from beat to beat. That goes in hand with the forced perspective changes, such as the body-swapping experience between David and Syd in the pilot episode, where the camera turns upside down to disorient the audience, as are the characters.

Of course, it’s not just the camera-work that sets Legion apart from what came before. A lot of the show takes place inside David’s head, and Hawley makes use of this abstract world, so to speak, to double down on that surrealism. By creating visually absurd compositions, such as several tablet-sized screens attached to poles and set in the grass; using blinding lights to create a sense of immersion; or inserting facets that stand out, such as a Bollywood dance number set to Serge Gainsbourg’s Pauvre Lola, or a silent film segment with inter-titles, the FX series makes odd, the new normal.

Elevating all of that is the show’s editing. In defining a unique style for Legion, Hawley seems to have prioritised it over substance, and has ended up creating more of an experience. The story moves in a non-linear fashion, and continuously plays with structure. The idea is to not let it “feel like TV as we know it”, the showrunner told Deadline in an interview.

That’s clear in the way it keeps inter-cutting without warning between the present and memories, even involving the astral plane in later episodes. For Hawley, the eight-hour first season was meant to convey a coherent story, so he revisits certain motifs over and over, either presenting them as is, in a dreamy state, or like a clouded memory.

To do so, the show relies on a variety of techniques, including lens distortion after the fact; playing with speed – slowing down action shots, speeding up elsewhere; creating double exposures, or extended cross-fades; and extensive use of sound manipulation – volume, echo, and distortion – to convey the craziness inside David’s mind. Even with its background score, Legion is constantly shifting ground, from the melancholic piano notes on Radiohead’s The Daily Mail, an EDM-inspired version of the timeless instrumental piece Maurice Ravel’s Boléro, to Pink Floyd’s pensive Breathe, from The Dark Side of the Moon.

The thing is, these tools exist for everyone. But no other TV show before Legion, outside the realm of animation, has cobbled all of it together for sheer appeal. In Hawley’s hands, Legion is an aesthetically indulgent cocktail of everything under the sun, that keeps away from turning into a jumbled mess, but rather presents itself as a fascinating fever dream, inspired by numerous horror pieces of past decades.

Now that it’s firmly established itself as the leader in that sense, hopefully the next season will go deeper with its characters, as Hawley promises. Then, Legion can truly position itself as a great show, and not just a mind-bending trip.

Legion is available to stream via FXNow, or Hulu; and for purchase via Amazon Video, iTunes, Microsoft Store, or YouTube.

Further reading: Legion, Marvel, FX, X Men
Akhil Arora Email Akhil
Akhil Arora covers entertainment for Gadgets 360, interviewing stars such as Christian Bale and Anurag Kashyap, covering series premieres, product and service launches across the globe, and looking at American blockbusters and Indian dramas from a global socio-political and feminist perspective. As a Rotten Tomatoes-certified film critic, Akhil has reviewed over 150 movies and TV shows in over half a decade at Gadgets 360. When he is not completely caught up with new film and TV releases, Akhil ...More
Android Wear 2.0 Rollout Delayed Due to Bug, Google Reveals
NPCI Launches In-Store UPI Payment Facility With Reliance Retail

How Legion Redefined the Look of Superhero TV
Comment