What Makes Christmas-Themed Movies So Popular, All Over the World?

It can be easy to classify Christmas movies as rom-coms, but for some, the genres stand apart.

Christmas movies are an enduring tradition even in India, but what makes this genre of films so popular? We might brush away fairy tales as we get older, but return to Christmas movies year after year. India doesn't boast of a variety of original Christmas-themed content, but that doesn't stop viewers from flocking to OTT platforms or re-runs on television to watch these movies. Is escapism what pulls viewers to these ‘holiday' movies, or is there more to it?

The easy-to-follow plotlines, familiar ups and down, mistletoe awkwardness, snow-covered trenchcoats, and characters that feel relatable (even though our lives couldn't be more different) invite me to spend hours watching them on a screen, year after year. Christmas-themed movies and reality here couldn't be more different; Christmas in my city means a stroll in Bandra's lit lanes or staring at overly decorated Christmas trees in malls, for those who don't have an overt connection to the festival. Yet, these movies are comforting and the equivalent to holding a hot chai on a cold night.

Perhaps because, like every good MBA-holding marketing strategist would tell you, it's important to appeal to emotions. And the makers of Christmas movies have cracked the formula of doing this right. What makes these movies so universal? Probably the fact that they're less about Christmas and religion, and more about warmth, love, and sharing; the very feelings we hold dearest to us and spend a significant amount of our lives chasing.

The themes of kindness, giving, love, and family overshadow everything else in the Christmas movies, even the enormous Christmas trees that feature in every movie. No characters in these films are beyond redemption, and love finds a way to everyone, even knights from the 14th century who have time travelled to 2019 — in The Knight Before Christmas.

It can be easy to classify Christmas movies as rom-coms, but for some, the genres stand apart. “They are different from rom-coms in the way that Christmas is the driving force of these movie, for me everything else feels secondary,” said Manya Sinha, a 22-year-old student from Chandigarh. 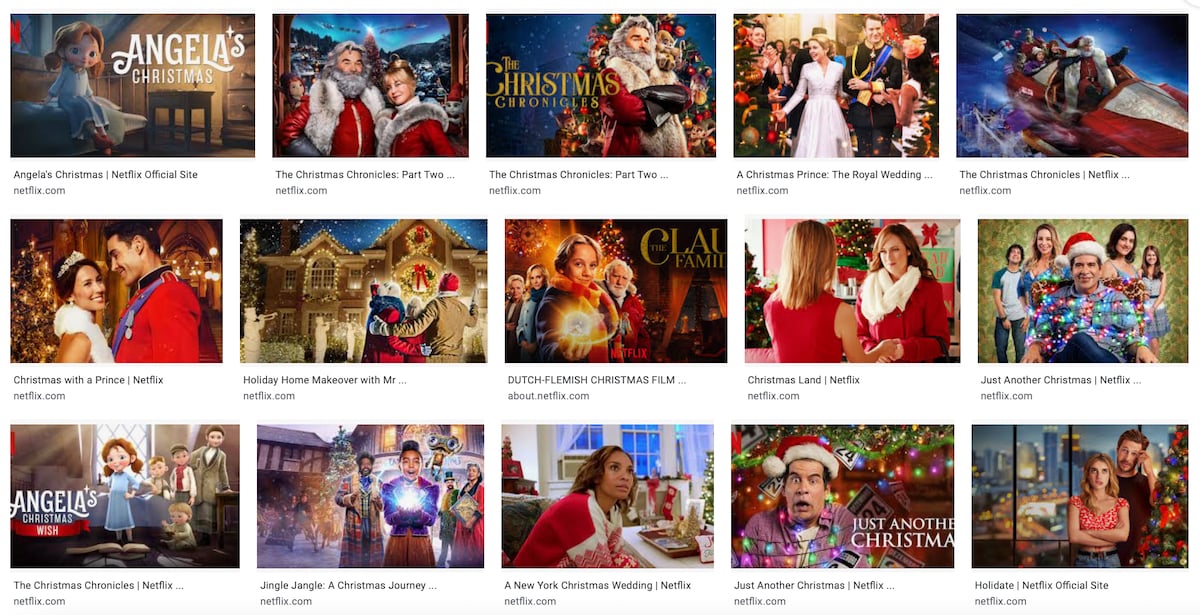 Searching for Christmas on Netflix can be overwhelming
Photo Credit: Screenshot

"The gifts, the gaiety, the lights, the carols, and the fact that most of them are set during winter nights – everything about the movies feels so warm. Christmas isn't big in my family so I like to vicariously live the festival through the characters in the movies," Sinha added.

Researcher S. Brent Plate argues in his research paper on Religion and Film and subsequently in a Business Insider article that it is not just escapism that makes these movies so popular; they also offer a glimpse into a world as it could be.

If there is has ever been a time to believe in a better world, it is now. Perhaps that's why I have found myself flocking to rom-coms more than ever, in the past few months. It's nice to get lost in a world away from my own, but it's even nicer to re-visit a familiar world, where I know the characters and can safely anticipate the ups and the downs. And while escapism may not be the sole factor for Christmas movies, it certainly is one that can't be ignored. Who doesn't need a respite from the news, especially in 2020?

For some, Christmas-themed movies are about representation. 22-year-old journalist Shauna James watches these movies, clichéd as they might be, with a passion. They portray a part of her childhood she believes most cinema in India ignores. "The movies are westernised but still more relatable to me than Diwali-centric movies. We don't have any mainstream Christmas movies in India, which is sad."

James relates to the Christmas traditions reflected in the movies – putting up the tree, the Christmas Eve excitement, and of course, opening presents the next day. The movies are also a source of nostalgia for childhood, for her – she's watched the likes of Home Alone with her extended family, people who share the same lived experience about Christmas as she does.

What used to be watching re-runs of Home Alone on the TV, a Christmas potlock at school where we'd all inevitably snack on only the chips, and decorating the tree, has evolved to watching trashy Christmas movies with my best friend on Netflix Party, a budget Secret Santa, and a lot of plum cake

But it's not about relatability for all viewers – or even a strong attachment for the festival. “They're not relatable – but they're fun, they're rom-coms, and sure shot feel-good movies. These movies compensate, a bit, for the fact that there's a lack of Christmas holiday festivities in my life,” said Ashna Babani, a dietitian based in Mumbai.

Christmas-themed moves are so strongly associated with Hallmark that they are often referred to as Hallmark movies. According to a report by The New York Times last year, Hallmark channels increased their annual Christmas movie count by 20 percent since 2017, while Netflix doubled its count in the same time. A quick search on Netflix will prove the same, and you don't even have to spell ‘Christmas' right. Besides the 45 odd Christmas-themed titles popping up after the search, Netflix also suggests users to explore titles related to ‘Holiday Favourites', 'Romantic Christmas Movies', 'Feel-Good Christmas Movies', 'Christmas Children and Family Movies', and more.

The streaming platform, in fact, has a Holiday Movie Universe – an interconnecting world of original Christmas-themed films linked to each other. The streaming service explained, with a detailed graphic, how the movies connect with each other, "without creating a Netflix Holiday Movie Universe paradox." It began when producers wanted to show a movie within 2018's The Holiday Calendar, and chose Christmas Inheritance (2017). Not only do the characters watch each other on TV in different Netflix movies, they also have connections to Aldovia, the setting for 'A Christmas Prince' movies, which also features in 'The Knight Before Christmas' and is close to Belgravia, the land in 'The Princess Switch'.

The lines between these movies are admittedly blurry – and not just because of their connections to Aldovia or Vanessa Hudgens. There are so many similar films exploring the same themes in different robes, it can take a few seconds to recall the main plot. I may not remember major ways in which 'A Christmas Prince' and 'The Princess Switch' differed, but I do remember that the warmth they left me with – even if just for a few minutes. Thankfully, the titles are good indicator of what exactly the movie is about.

That Christmas is a lucrative market everyone wants a piece of is hardly a surprise. Besides the usual merchandise, one Christmas movie in the US (where else?) stood out with its marketing. Karen Schaler brought her holiday movie and novel Christmas Camp to life by hosting a camp at luxurious resort in Scottsdale, Arizona that promised holiday themed activities. Starting at $259 (roughly Rs. 19,100) a night, it was advertised as a ‘Christmas Camp for grown-ups,' by Schaler, who also wrote the more popular movie ‘A Christmas Prince.'

Christmas-themed movies are the ideal example of feel-good movies. Away from the twists and seriousness of other genres, these movies are an oasis of endorphins. There used to be a film festival in California to honour feel-good, happy movies. The Feel Good Film Festival (FGFF), also known as the Sunflower Film Festival, took place annually in Hollywood from 2008 to 2012. It showcased feature films, screenplays, short films, and movies by students that have positive themes and happy endings. The FGFF even had yellow carpet entrances!

Like a lot of other content, sometimes you end up remembering the state of mind you were in when you watched the movie, and how it made you feel, more than the plot. Currently studying fashion in London, 23-year-old Shweta Sunny recalls watching Malayalam Christmas movies on television with her family post-lunch on Christmas day. “It's that sense of belongingness and how the movies bring it all together,” she said.

Christmas in Mumbai — or any other city in India — may differ from Paris or New York, but we learn to adapt and tweak what we learn through Christmas movies and folk tales, to formulate our own traditions. What used to be watching re-runs of Home Alone on the TV, a Christmas potlock at school where we'd all inevitably snack on only the chips, and decorating the tree, has evolved to watching trashy Christmas movies (Holidate, I'm looking at you) with my best friend on Netflix Party, a budget Secret Santa, and a lot of plum cake, for me. Traditions evolve, and sometimes, our ways of watching movies evolve with them.

Further reading: Christmas movies, Christmas, Netflix, Amazon, Holiday Season
Tanishka Sodhi Email Tanishka Tanishka Sodhi is a sub-editor at Gadgets 360. As a journalist, she has covered education, culture, and media and mental health. She is interested in the intersection of technology and culture, and its impact on everyday lives. Tanishka is a staunch advocate of gender equality, and the correct use of commas. You can get in touch with her via Twitter at @tanishka_s2 or drop a mail at tanishkas@ndtv.com. More
How to Port Your Existing Mobile Number to Vi (Vodafone Idea)
The Book of Boba Fett Series Announced, to Premiere December 2021 on Disney+

What Makes Christmas-Themed Movies So Popular, All Over the World?
Comment