BoJack Horseman, Rick and Morty, and the Rise of Pensive Animated Comedies

Midway through the penultimate episode of BoJack Horseman’s third season, the drunk worn-out coked-up eponymous protagonist laments: “Why can’t life be like it was on Horsin’ Around? All our issues conveniently settled in 22 hilarious minutes.” Voiced by Will Arnett – Gob Bluth in cult hit Arrested Development, and the voice of Batman in The Lego Movie universe – the character is referring to the popular show-in-a-show sitcom that catapulted him into stardom, but is now his only legacy.

It might have given him enough riches to last a lifetime, alongside dollops of admiration and attention wherever he went. But for BoJack, that outward sense of accomplishment is just another way of escaping from his issues, all of which are centred around himself. It’s why he prefers watching reruns of his decades-old show while drunk and/ or high out of his mind. For an animated comedy set in a world where anthropomorphic animals and humans live beside each other, and that deals with the people, culture, and zaniness of Hollywood, it’s a dark place to go to.

Raphael Bob-Waksberg, the creator of BoJack Horseman, has only further leaned into that poignant as the show has progressed. BoJack didn’t start out as great, with the first season a rickety ride as the writers failed to plumb enough comedy out of their oddball characters – BoJack’s agent Princess Carolyn is a pink Persian cat, and his rival (and his ghostwriter’s then-boyfriend) Mr. Peanutbutter is a yellow Labrador Retriever – relying too often on background jokes and one-liners about the animals.

That changed in season two, as the show found the balance of having fun with its anthropomorphic cast and the seriousness of being “real” with some moments. BoJack wasn’t just an animated comedy anymore, as it braved the depths of BoJack’s depression, Diane’s quest to make something of herself, Carolyn trying to move forward without BoJack, or Todd coming to grips with his sexuality during season three. And it’s set to continue during the upcoming fourth season – available Friday, September 8 on Netflix globally – as the show looks more inward with all its characters.

A trailer for the fourth season of BoJack Horseman, available September 8 on Netflix

A common theme for its heavy storylines has been the search for meaning in life, which is why BoJack’s setting in the shiny and glamorous Hollywoo(d) provides a perfect contrast to act as a mirror. “The stories we tell, particularly the internal story: how we define ourselves to ourselves,” Bob-Waksberg told Complex, “and who we think we are versus who we want to be.”

At the same time, he added, family is a big theme for the new season, which will pick up on the various threads from the previous year. It's not alone in tackling these themes either. Another cartoon whose premise is hugely zany – a super-genius acerbic scientist Rick who lives with his daughter and her dysfunctional family, and takes his insecure grandson Morty on inter-dimensional adventures – has also never been afraid to tackle sadness, self-loathing, and low self-esteem: Rick and Morty. The show is currently in the middle of its third season, and will resume after a break on September 10 (on Adult Swim in the US) and September 17 (on Netflix elsewhere).

Created by Dan Harmon (Community) and Justin Roiland, who voices both the titular characters, Rick and Morty regularly cloaks its attempts at wading into the scary emotional unknown by introducing the wackiest, silliest, and strangest cosmic ideas: be it Morty fathering a child with an alien sex robot, Jerry and Beth attending couples therapy on an alien planet, or Rick turning himself into a pickle to avoid family therapy. By doing so, it’s able to approach sincere topics without submerging its imagery in sombre colours, or having its characters brood over like today’s superheroes.

It’s also why Rick and Morty – and BoJack Horseman, as well – wouldn’t work as a live-action piece; forget the insane budget estimations for such over-the-top sci-fi fare, it’s the friendliness of cartoon drawings, talking animals and bright pop colours (not to mention the endless visual gags in both) that helps sell the shows as inviting, and not dreary. That doesn’t make the realisations any lesser, though.

Both like to deal with our place in the universe – Rick and Morty is more overt with its endless dimensions, and hence limitless copies of its characters; while BoJack’s bender in the aforementioned season 3 episode ends with him at the Planetarium in Griffith Observatory – and their shared love of subversive and upending tropes tends to leave the characters in psychological distress (rather than moments of shared joy) more often than not. It’s also why they both have fourth-wall breaking moments. 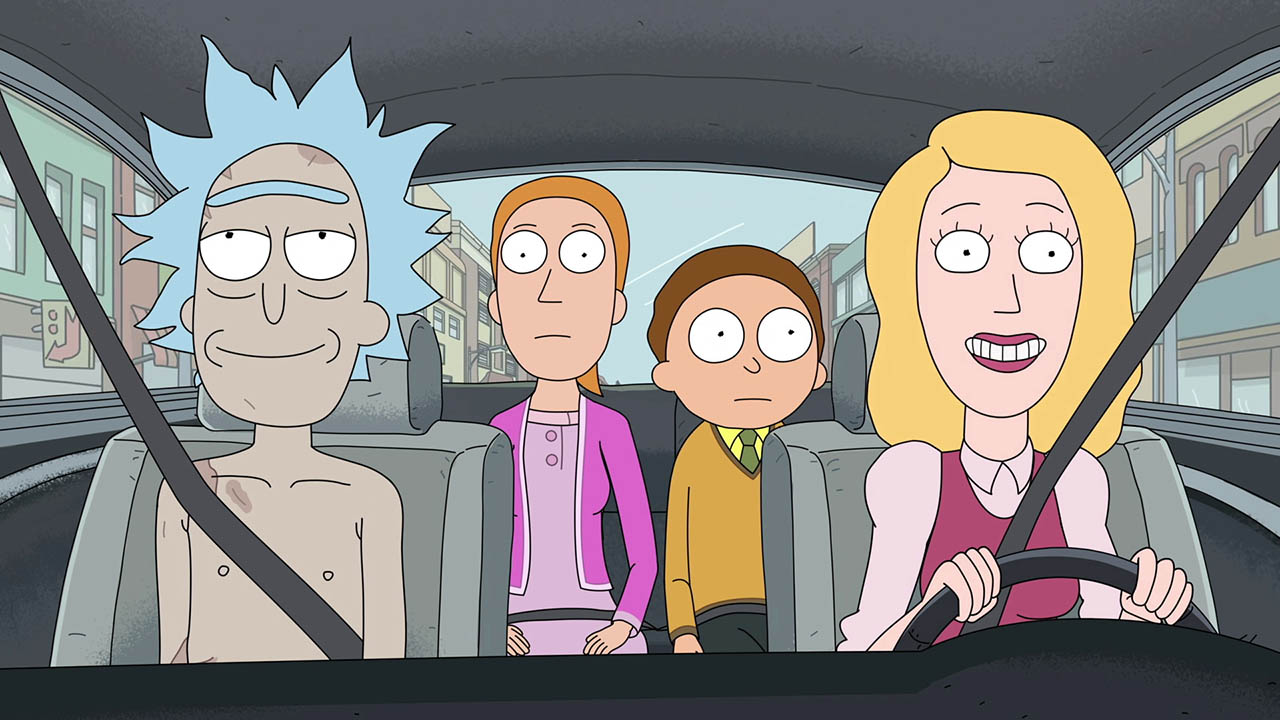 (L-R) Rick, Summer, Morty, and Beth in a still from Rick and Morty season 3

Rick and BoJack are destructive heroes, and in their quest to attach meaning to their lives, they pull everyone around themselves into their vortex. Morty is his favourite tool, no doubt, because he’s the most gullible of all. The ongoing third season of Rick and Morty is dealing with the fallout of Jerry and Beth’s divorce, and how it’s impacting the people involved. While some of it came from tensions brewing between the couple since years, it’s clear that Rick’s damaging tendencies have played a part.

BoJack, on the other hand, has already sent every personal relationship through hell. To enable his own self-loathing, he has indulged and fuelled the negative and self-harming ways of those closest to him, be it Todd’s video game obsession to keep him from leaving, wedging himself into agent and old flame Carolyn’s life to keep her from finding satisfaction, using his father figure status with Horsin’ Around child-star Sarah Lynn for emotional manipulation, or finding excuses to remain in Diane’s life.

That’s not to say the hearts of these characters are completely black. Both Rick and BoJack have a softer inside that they’re unwilling to show for the most part, but it bubbles up in the concern they display at times. For Rick, it’s mostly his secret love for Morty, and it’s Todd for BoJack, even as their intentions usually tend to be self-serving than outward-looking.

Of course, the two shows have their differences as well, owing to their setting. From the start, BoJack has been a critique of Hollywood culture in general, which turned into a season-long Oscars shenanigan last year, as the writers took aim at the self-importance attached to the ceremony. On the other hand, Rick and Morty has always been more interested in topping its previous absurdist cosmic adventure with an even more absurd one.

But ultimately, they share a lot with each other, and in doing so present two terrific arguments for how animated comedies – no longer beholden to the 24-episode weekly structure, and freed from ratings with the rise of Internet subcultures and streaming services – are offering and catering to adult viewers that crave more than the traditional clichéd fare. They will never have the popularity of say, a Friends or The Big Bang Theory, but their nihilistic outlook allows them to hit powerful beats in an unflinching manner.

Further reading: BoJack Horseman, Rick and Morty, Netflix, Adult Swim
Akhil Arora Email Akhil Akhil identifies himself as a stickler for detail and accuracy, and strongly believes that robots will one day take over most human jobs. In his free time, you will find Akhil beating the computer at EA Sports FIFA or streaming new highly-rated TV series. More
Android One Is Anything But Dead, Google Reaffirms With Xiaomi Mi A1

BoJack Horseman, Rick and Morty, and the Rise of Pensive Animated Comedies
Comment