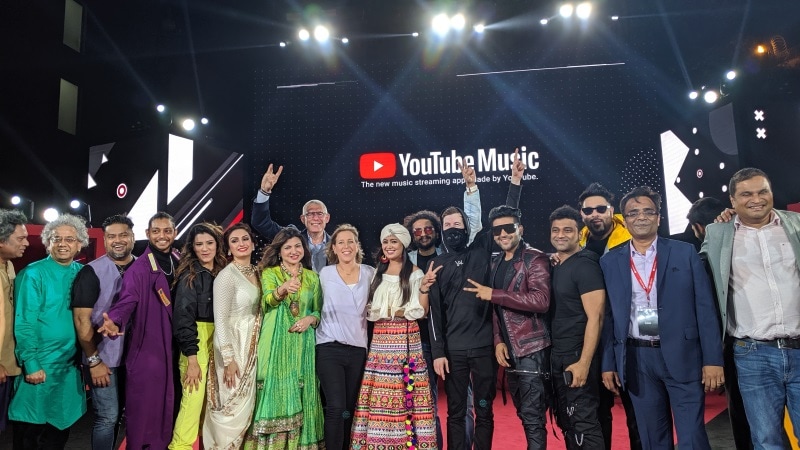 YouTube Music clocked 3 million downloads within the first week of its launch in India, the music streaming service announced Monday in Mumbai, as it brought out a parade of star artists from across the country to celebrate its arrival and early success. The likes of Aastha Gill, Akriti Kakar, Alka Yagnik, Anirudh Ravichander, Badshah, Bianca Gomes, Clinton Cerejo, Devi Sri Prasad, Guru Randhawa, Harshdeep Kaur, Jonita Gandhi, Sonu Kakkar, and Taufiq Qureshi performed on stage, with the evening concluded by Norwegian DJ Alan Walker. All the artists (predictably) congratulated YouTube Music for its launch in India and some, like Yagnik, said that it's exactly “what we needed as artists”.

“This year, YouTube is celebrating 11 amazing years in India,” YouTube CEO Susan Wojcicki said on stage Monday. “We're proud of the extraordinary growth across the platform, especially with music. Our tremendous scale and reach is why many talented artists and creators across India come to YouTube to share their voice with the world. It's why we're seeing Indian artists connect with fans from Delhi to Los Angeles and everywhere in between.”

YouTube's global head of music, Lyor Cohen, brought up how eight music videos from Indian artists now have over 500 million views, compared to zero a year ago, and the oft-cited fact that Indian musicians have been dominating the site's global top songs chart for several months now. That came to a head in the first week of March, when the top three spots all went to Indian artists: Alka Yagnik, Neha Kakkar, and Kumar Sanu. At the time of writing, the first two are still commanding the respective rankings, while Sanu is down to eighth position. The current global top-10 also includes Arijit Singh (9th) and Udit Narayan (10th).

“Week to week in 2019, an average one-fifth of the entries on the Global Top Songs chart featured Indian artists,” Cohen added in a prepared statement. “We want to champion artists, give back to the industry, and work to better help artists, and labels meet their priorities. Most importantly, our teams are constantly working to strengthen our platform so artists can shine. We are incredibly excited to partner with Indian artists and labels to grow faster and go further.”

Though YouTube champions itself as a boost to the music industry, the world's biggest video platform is internationally known for being the lowest paying service for artists, according to Digital Music News. It reportedly pays $0.00074 (about Rs. 0.051) per stream, a far cry from industry leaders in Napster ($0.019, or about Rs. 1.32) and Jay Z-owned Tidal ($0.0125, or about Rs. 0.87). Both Napster and Tidal are not available in India.

With Spotify making its entrance at the tail end of February, YouTube Music is the last big player to enter India's nascent music streaming market. It's more affordable at Rs. 99 per month for individuals and has a family plan — Rs. 149 per month, for up to six members — unlike Spotify. And its arrival likely acted as the catalyst for Apple Music to slash its rates across the board in India, matching it on both those accounts. Moreover, most Indians have some form of listening history on YouTube, thanks to the ad-supported nature of the service.

But YouTube Music is “designed to be a paid experience”, the VP of product management, Adam Smith, told members of the press on Monday. Though you can use it for free, even basic features such as background listening — available on the ad-supported tiers of Spotify, JioSaavn, and others — are behind a paywall on YouTube Music. That makes the new service a more direct competitor with the paid-only Apple Music, since it's essentially unusable if you don't opt to pay for it. Paid subscriptions notably form just one percent of the music market in India.

And why should Indians pay for YouTube Music over the existing music streaming services? For one, the strength of the catalogue, Smith stressed. That's not really a boast you hear in the music business given everyone has the same tens of millions of songs on their platform — unless you're Spotify in India and are being held hostage by Warner Music — but Smith noted that YouTube Music additionally has remixes, covers, live performances, and music videos, of course. It's drawing off YouTube, after all.

Better yet, YouTube Music is powered by the smarts of its parent company, Google. That means it can make use of machine learning and the Knowledge Graph when you're trying to look up a song but don't remember the artist, the album, the song name or even the lyrics. Type in “that hipster song with the whistling” and you'll be redirected to Swedish indie outfit Peter Bjorn and John's 2006 song “Young Folks”. Put in “Starbucks lovers” and the top result is Taylor Swift's 2014 hit “Blank Space”, where the lyric “long list of ex-lovers” has been frequently misheard as the other thing.

In addition to the local playlists curated by the YouTube team, the app also offers music recommendations based on your Google account settings. If you've location history turned on, YouTube Music will suggest playlists depending on where you are — be it home, office, the gym — what time it is, and what you're doing, such as commuting. It will then try to predict your mood and show relevant shelves, such as party music for Friday night or relaxing beats for an evening downer.