Wimbledon, IBM Use Watson AI to Help Fans Get More From Matches 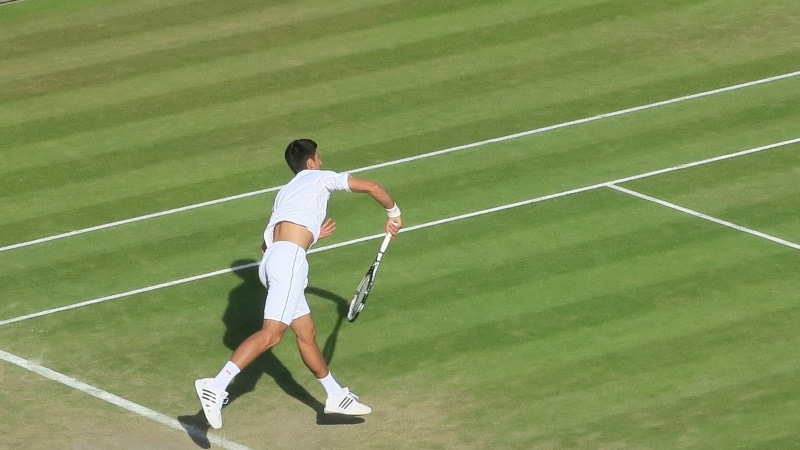 The Wimbledon tennis tournament, which starts Monday, will use IBM's artificial intelligence agent Watson to help direct fans to the most exciting matches, automatically generate video highlight reels and guide guests through the grounds of the All England Lawn Tennis Club.

A voice-activated digital assistant called "Fred," named after British tennis great Fred Perry, will help those attending Wimbledon find their way around. Visitors can ask Fred for directions to the nearest strawberry stand, how to buy a Wimbledon towel or who is playing right now on Centre Court. Fred will also help visitors find other activities - such as the children's play area - they might want to check out while at the Club. The assistant is powered by Watson's natural language processing ability.

Another IBM technology will help fans find matches that are likely to be the most exciting to watch by analyzing player statistics. IBM and AELTC have jointly developed a new metric called competitive margin, which is the differential between the opposing players' ratios of forced to unforced errors. If there is little margin between them, the match is likely to be a close-fought contest. The new technologies were unveiled by IBM and AELTC on Tuesday.

Watson and International Business Machine Corp.'s $18 billion (roughly Rs. 1,16,068 crores) "cognitive computing'' group are a rare bright spot at the company, which has faced a years-long slump in sales and earnings. New York-based IBM is counting on the unit as its long-term growth driver. IBM has called Watson a connector across all its services and software and has announced a large number of deals to build out Watson-related projects.

IBM has sponsored Wimbledon since 1990 and in recent years has used Wimbledon as a test bed for new uses of Watson.The systems on display at AELTC, called SlamTracker with Cognitive Keys to the Match, will also give fans insights into the game, highlighting what kinds of tactics each player is likely to use against that particular opponent. It will also predict, at any given moment, which player is most likely to prevail based on the state of the game and their past performance.

"What we are trying to do is surface things in a more digestible way for the fans," Sam Seddon, IBM's Wimbledon Client and Programme Executive, said. "We are trying to lift up the insights and say this is important, and if you are interested in which way this match is going to go, focus on this point."

Alexandra Willis, head of communications, content and digital for AELTC, said Wimbledon is trying to "move beyond data and statistics actually into stories and this idea of making it more applicable, approachable to more people."

IBM will also be using artificial intelligence to automatically compile highlight reels for matches taking place on six of Wimbledon's courts. This system will look at everything from the importance of a point to the game's outcome, the noise of the crowd reacting to that point, the volume and sentiment of social media posts and even facial analysis of the players themselves, to determine the best portions of video to include in a highlight reel for that game.

Willis said the technology will be able to put together highlight videos in less than 30 minutes - compared to 45 minutes to an hour for the human editors the Club has used previously - and that this will free up valuable staff time to spend on other critical tasks.

To provoke social media discussion among fans, Seddon said Watson would make "some quite provocative" statements on the theme of what traits are most important for a Wimbledon champion. The statements will be based on Watson's analysis of 53.7 million Wimbledon tennis data points since 1990 and an analysis of more than 11 million words of press coverage of the tournament going back to 1995.

Using this data, Watson analysed players across six broad factors - passion, performance under pressure, serve effectiveness, stamina, how well the player either adapted their normal playing style to an opponent or was able to force an opponent to conform to their tactics, and the ability to return serves. It will then use these factors to make an argument about which factors are most important, which AELTC and IBM hope will prompt vigorous debate on social media channels, the two organizations said.

Mick Desmond, commercial and media director for AELTC, said that the club was pursuing these digital strategies ultimately to grow the tournament's audience, particularly online and in new markets like China.

For its part, Seddon said that IBM tries to take technologies it pioneers at Wimbledon and bring them to a wider group of business customers. Some of the insights from previous years, into which videos attract the most attention from Wimbledon fans, for instance, fed into work IBM later did for AMC Networks International to help predict which television programs will get the highest ratings, Seddon said.

AELTC's use of Watson is just part of a host of new technologies it is pioneering at this year's tournament, including 360 degree video and augmented reality from the practice courts. Fans watching practice matches will be able to point their phones at players on the court and get insights into who they are, their past performance and why they might be interesting to keep an eye on.

Facebook Says It Deletes 66,000 Hateful Posts Per Week
Selling Your Old Phone Online? You May Have to Register for GST