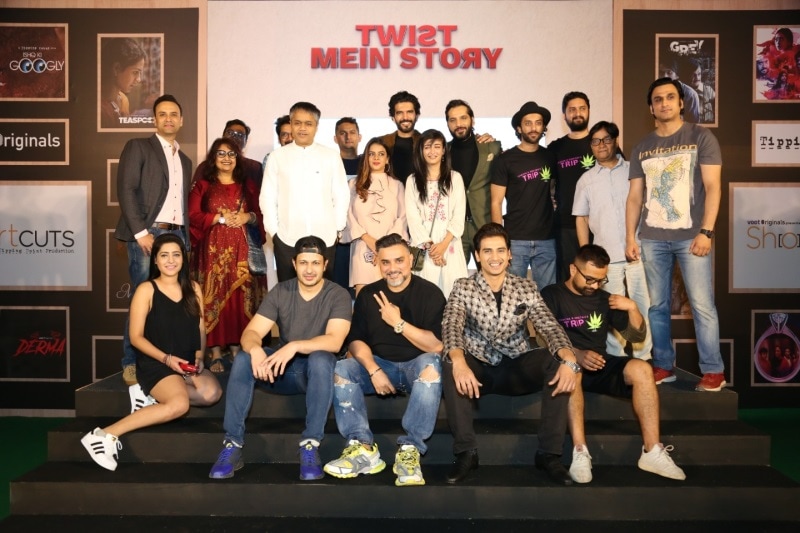 The cast and crew of several Voot Originals Shortcuts

Viacom 18-owned Voot has announced its foray into original short films with new label ‘Shortcuts', which will launch in February with 12 shorts produced by its in-house digital-focused studio Tipping Point. The likes of Kirti Kulhari (Four More Shots Please!), Shiv Pandit (Selection Day), Barun Sobti (Tanhaiyan), Mona Singh (Jassi Jaissi Koi Nahin), and Akshara Haasan (Shamitabh) will be featured in these short films, which have been directed by Debatma Mandal (Stories by Rabindranath Tagore) and Vikas Chandra (Chacha Vidhayak Hain Hamare) among others. The first five of these ‘Voot Originals Presents Shortcuts' will release February 8, followed by four more next week on February 15, and the remaining three on February 22. They will be available for free on the ad-supported streaming service.

‘Voot Originals Presents Shortcuts' will kick off with Sobti-starrer Derma and Pandit, Haasan-starrer Joy Ride alongside Ishq Ki Googly, Bauma, and Chacha and Cheetah's Trip this Friday, February 8, 2019. Glitch, Grey, Aun, and Teaspoon will release next Friday, February 15, 2019 on Voot, and rounded up by the women-centric Maya directed by Chandra, On the Road, and Red Velvet on Friday, February 22, 2019. Viacom 18 is promising “an array of intense and off-beat thriller dramas, […] spread across multiple genres of drama, adventure and mystery with varied plots set across India”.

For Voot, Shortcuts will be its first expansion into the original films territory, which was dominated by streaming services such as Netflix, ZEE5, Eros Now, and Viu in 2018 in India, releasing over 20 short and feature-length movies between themselves.

“At Voot, we have been focused on providing high decibel engagement and an immersive content experience to our users,” Akash Banerji, Viacom 18 Digital Ventures' head of marketing and partnerships, said in a prepared statement. “Voot Original Shortcuts, produced by Tipping Point, allows us to leverage synergies and add to the content diversity of Voot. We are sure that the distinctive narrative and unique storytelling is sure to intrigue audiences and gather significant interest.”

“The purpose of Tipping Point is to tell edgy, provocative stories and narratives missed out in the mainstream,” Ajit Andhare, Viacom18 Studios COO, said. “These are targeted for personal consumption on a mobile or a tablet. Our maiden production for Voot in the form of 12 exciting short films seeks to make a big impact amongst digital viewers with this eclectic bunch of stories.”

Launched in May last year, Viacom 18 Studios' digital brand Tipping Point is also producing original series for Voot, including an anthology series called X-Ray from director Srijit Mukherji (Begum Jaan), which is based on Satyajit Ray's short stories in a contemporary setting, and crime drama Jamtara, set in a small town that's the “epicentre of all phishing crimes” in India, from National Award-winning director Soumendra Padhi.

Here's the complete list of the 12 new Voot Shortcuts:

Derma — “The story of a man whose life turns upside down after he gets a tattoo made by a mystical man in the mountains. The intriguing saga is a unique take on the circle of Karma.”

Joy Ride — “A road trip that takes Raunak amid the wilderness on an unusual road trip, ignoring the perils of a menacing folktale as challenged by his friend. What follows is an extraordinary tale of the unforeseen.” Haasan and Pandit star alongside Taher Shabbir (Fan).

Ishq Ki Googly — “A story of a husband who plans to murder the illicit lover of his wife, but things go bizarrely out of plan, thereby compelling him to play this game of love.”

Bouma (Bengali) — “Set in the heart of Kolkata, Bouma is the story of a middle-aged couple in the 1960s, living their mundane lives. A nagging husband is diagnosed with cancer and the wife agrees to donate his organs to his scientist friend after he dies. What she does with her husband's still-conscious head after death culminates to a climax, which is both funny and dark.”

Chacha and Cheetah's Trip will “take the protagonists on an adventure of a lifetime. It is a story of two marijuana enthusiasts who after smoking the mythical and legendary windmill joint take an unusual trip.”

Grey — “A unique take on a murder, investigation between an autistic man and an inane cop.”

Aun A(u)n Usual Day — “Aun details the problem faced by a photographer against a tribal man who lacks wisdom due to the dearth of human interaction.”

Teaspoon — “Series of incidents become ingredients for a Molotov cocktail that leads to a disturbing end.”

Kirti Kulhari Is One of the Leading Ladies in 'Four More Shots Please!', a Show With an All-Women Crew

Kirti Kulhari, who stars in Maya, at an event for Voot Originals Shortcuts

Maya — “The story of a young independent working woman living in Mumbai with her mother, who suffers from incontinence.”

On the Road — “A story with unusual coincidences happening on a night drive of Aravind on the way home.”

Red Velvet — “What happens when unusual incidents take place at a household when a ten-year-old boy enters home.”