Spock, Pike, and Number One to be part of Short Treks. 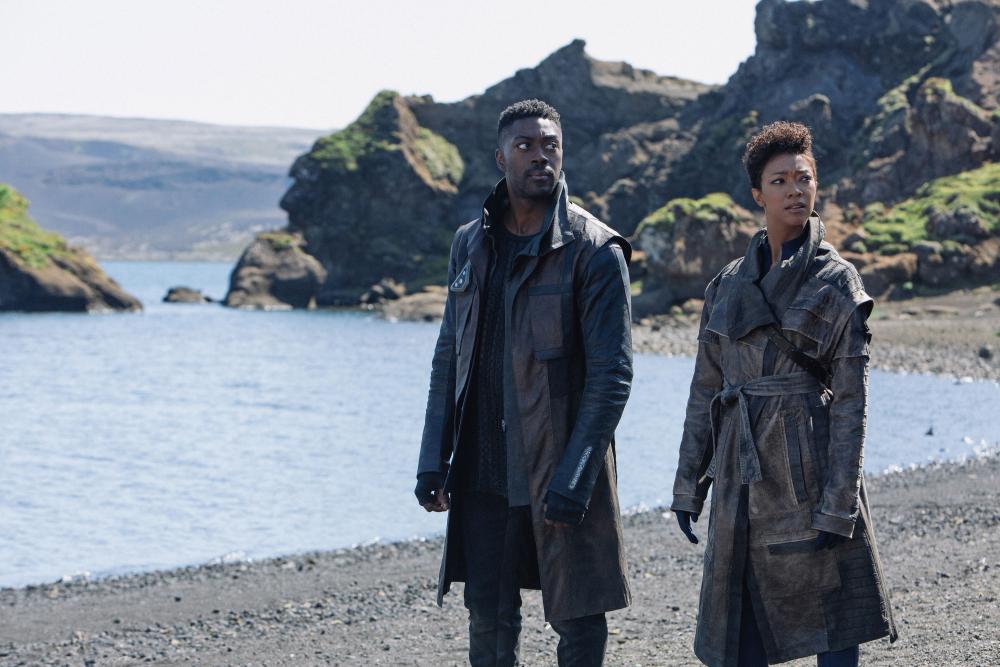 At San Diego Comic-Con 2019, Star Trek TV chief Alex Kurtzman announced that David Ajala (Supergirl, Nightflyers) was a new cast addition to Star Trek: Discovery season 3 as Cleveland “Book” Booker. Additionally, there will be six new episodes in the short-form series Star Trek: Short Treks, some of which will feature Spock (Ethan Peck), Captain Christopher Pike (Anson Mount), and Number One (Rebecca Romijn). Two Short Treks episodes will be animated, and one will serve as the teaser for the upcoming Star Trek: Picard, which brings back Sir Patrick Stewart as the title character.

In its Comic-Con announcement, CBS All Access described Book (Ajala) as “smart and capable, [who] has natural charisma and a devil-may-care attitude that tends to get him into trouble as often as it gets him out.” To accompany his casting, CBS All Access released several new photos from Star Trek: Discovery season 3, featuring Ajala and Sonequa Martin-Green's characters. No release date or teaser trailer was unveiled for Star Trek: Discovery season 3, which began production only earlier this month in Iceland.

Season 3 will be set 1,000 years into the future, Kurtzman revealed at the Comic-Con panel. “There will be things you recognise,” he added. “Things you don't recognise. Part of the fun of it is we get to honour canon, but shake it up a bit. […] I want to assure you all that it's still Star Trek. It will always be Star Trek the way Roddenberry wanted it.”

“We go to the deepest level in season 3 because we're in this new place all together,” said Martin-Green, who plays the lead character Michael Burnham. “We have to figure out where we are and who we are. [...] There's this sense of brewing fire, passion, and heart. We're really excited about the next stage and the path that we're foraging. [...] In addition to the cinematic part, there's also this magic of being connected to canon like we've never been before.”

As for Star Trek: Short Treks, Spock, Pike, and Number One will be part of some episodes since they couldn't be taken to the future (of season 3) for canon reasons. Kurtzman toyed with the Comic-Con crowd and asked if they should get their own spin-off show. As the crowd (naturally) cheered loudly, Kurtzman replied: “Okay, we'll think about it.”

Three new Short Treks will be set on the USS Enterprise. The titles for all six Star Trek: Short Treks are “Ask Not,” “Q&A,” “The Trouble with Edward,” “The Girl Who Made the Stars,” “Ephaim and Dot,” and “Children of Mars.”

It's unclear if CBS All Access and Netflix will handle Short Treks distribution better than they did last time around, when all four episodes were abruptly dumped in the “Trailers & More” section of Star Trek: Discovery on Netflix on the same day as season 2 premiere.