PewDiePie released a video on Sunday calling for end to the movement. 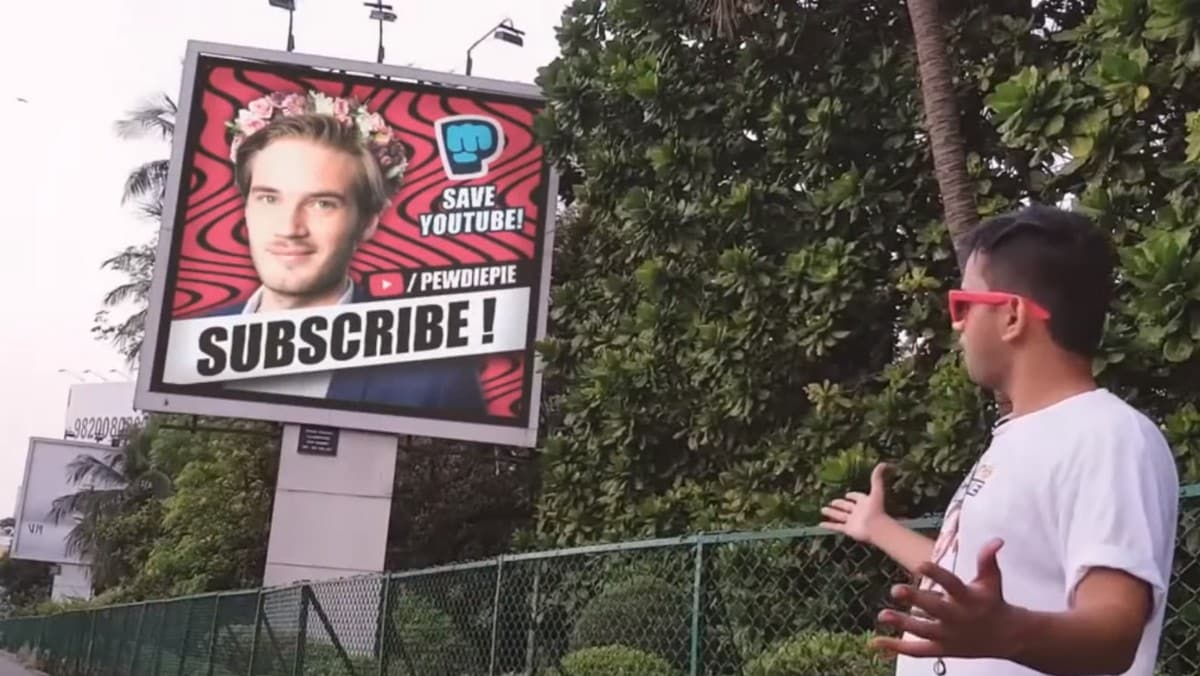 On the day a gunman killed 50 people at two mosques in the worst terrorist attack in New Zealand history, the shooter also ushered PewDiePie, one of YouTube's biggest stars, onto an unwanted stage: The terrorist invoked his name.

"Remember lads, Subscribe to PewDiePie," the shooter said during a live stream of the mass shooting last month.

The shooter was referring to a grass roots movement among PewDiePie's fans to keep his YouTube channel in the No. 1 slot as an Indian channel threatened his top status. PewDiePie, whose real name is Felix Kjellberg and who has courted controversies involving racism in the past, immediately distanced himself from the terrorist, saying in a since-deleted tweet that he felt "absolutely sickened having my name uttered by this person."

But until Sunday, he had otherwise remained silent about the entire episode, and about how the worldwide "Subscribe to PewDiePie" fan movement had in some cases been hijacked by those seeking to spread hate.

On Sunday, he released a YouTube video calling for an end to the "subscribe" movement and addressing the New Zealand shooting for the first time on his channel. His message comes just after the accused San Diego synagogue shooter, John Earnest, apparently published a manifesto online in which he also referenced PewDiePie.

"To have my name associated with something so unspeakably vile has affected me in more ways than I might have shown," the 29-year-old Swedish YouTuber said of the New Zealand attacker. "I just didn't want to address it right away, and I didn't want to give the terrorist any more attention. I didn't want to make it about me. Because I don't think it has anything to do with me. To put it plainly, I didn't want hate to win.

"It's clear to me now," he added, "the 'Subscribe to PewDiePie' movement should have ended then."

With more than 95 million subscribers, Kjellberg long held claim to the title of YouTube's most popular channel until recently. But as he promoted an anti-Semitic YouTube channel, produced videos that cracked dark jokes about anti-Semitism and Nazis and once yelled the n-word while playing a video game, critics raised alarms about his influence on the young and impressionable.

The "Subscribe to PewDiePie" movement evoked some of those same concerns - culminating, of course, with its invocation during the Christchurch massacre.

The grass roots effort started harmlessly enough last year, with viral videos and pranks all seeking to promote the channel as the Indian channel T-Series encroached on PewDiePie's subscriber count. Before long it turned into a full-fledged, worldwide publicity battle for the title. A fellow YouTuber, Mr. Beast, bought billboard ads and radio and television spots to relentlessly promote PewDiePie. A cheerleader squad performed a routine carrying "Subscribe to PewDiePie" signs. People wore "Subscribe to PewDiePie" T-shirts and posted fliers advertising his channel on telephone poles.

But then it started to go awry.

"Something I learned - and hopefully it's something you can understand - is when you have 90 million people riled up about something, you're bound to get a few degenerates," Kjellberg said Sunday.

First, there were the hackers. Some of them hacked printers, managing to spew "Subscribe to PewDiePie" messaging worldwide. Others hacked the Wall Street Journal, publishing a mock apology to PewDiePie, which the newspaper immediately deleted.

Then there were the vandals. In March, a week before the New Zealand shooting, "Subscribe to PewDiePie" appeared scrawled three times on a World War II memorial in Brooklyn.

"Just so disgusting, so disappointing to have my name and community dragged into that," Kjellberg said Sunday. "I addressed it on Twitter. I disavowed it. We saw that it got removed and donated to the park. I hoped that was going to be it."

But it wasn't, of course.

Two weeks after the New Zealand terrorist invoked his name, Kjellberg uploaded a mock music video targeting T-Series that India's high court found so offensive that it ordered it blocked within the country. The video was one of two "diss tracks" that Kjellberg created during the battle with T-Series over YouTube's top slot. An Indian judge said a quick perusal of the videos revealed "repeated comments made which are abusive, vulgar and also racist in nature."

On Sunday, Kjellberg said the videos were just "made in fun, ironic jest," but also expressed regret, saying it's "clearly not fun anymore" and has "clearly gone too far." He said he would comply with the court order.

"This negative rhetoric is something I don't agree with at all," he said, "and I want that to stop, and to make it perfectly clear: No, I'm not racist. I don't support any form of racist comments or hate towards anyone."

Kjellberg came under fire in 2017 after the Wall Street Journal reported on nine inflammatory videos that, with a combined 23 million views, contained content seen as insensitive, racist and anti-Semitic. In one, two men laughed as they held a sign that said, "Death to all Jews." In another, a man dressed as Jesus said, "Hitler did absolutely nothing wrong," and in another Kjellberg threw out the "Sieg Heil" Nazi salute during a mock video. A neo-Nazi website, The Daily Stormer, endorsed his videos. Whether Kjellberg intended to be racist or was kidding, they wrote, "The effect is the same; it normalizes Nazism, and marginalizes our enemies," as the New York Times reported.

Disney, which owned a firm that operated Kjellberg's business, severed ties with Kjellberg over the videos the Journal unearthed. YouTube pulled a reality show series in which Kjellberg starred, TechCrunch reported.

At the time, Kjellberg disavowed hate groups in a statement as well.

"I think it's important to say something and I want to make one thing clear: I am in no way supporting any kind of hateful attitudes," he said in a statement posted to his Tumblr account in February 2017. "I make videos for my audience. I think of the content that I create as entertainment, and not a place for any serious political commentary. I know my audience understand that and that is why they come to my channel. Though this was not my intention, I understand that these jokes were ultimately offensive."

On Sunday, Kjellberg rejected the idea that the "Subscribe to PewDiePie" movement had anything to do with politics, race or nationality, and said he hoped that gaining more followers will stop being simply about "beating another channel."

"I think what we've accomplished is so much more than that," he said.