Some global interest in Parasite was there even before the 2020 Oscars.

Parasite, the South Korean black comedy movie that won the Best Picture at the 2020 Oscars last week, has seen a sudden jump in global search interest on Google shortly after taking over the golden statuette. The search giant on Wednesday revealed that on the day of the Oscars, the number of people searching for the term “Parasite” grew 857 percent and that interest had continued since. In the weeks after the awards, the title became the most-searched film worldwide, the company said in a blog post.

There was already some global interest in Parasite even before the 2020 Oscars -- thanks to the story that was a tragicomedy thriller about two very different families. Google said in the blog post that in the week before the awards ceremony, the film was the third-most-searched Best Picture nominee on its search engine, behind 1917 and Jojo Rabbit. But the interest hit new levels on the day of the Oscars and following the announcement of winners last week. 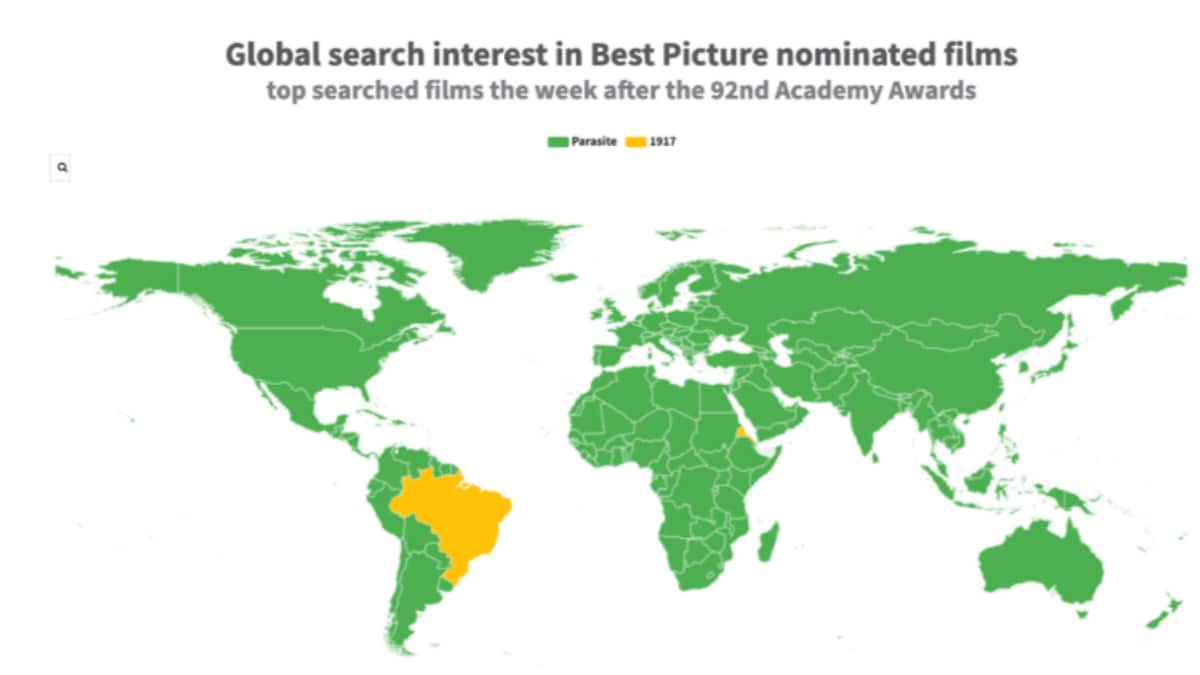 “Interest in Korean cinema has been growing steadily over the past decade—but the success of ‘Parasite' has sent people scrambling to find out more. Related searches for ‘Korea' and ‘film' have increased by more than 47 percent in the past month and reached their highest peak for 12 months in the week after the Oscars,” noted Eunah Lee, Communications and Public Affairs Manager, Korea, Google, in the blog post.

Alongside showing interest towards Korean films, Google users are found to have started searching about Parasite director Bong Joon-ho, who was awarded the Best Director at the 92nd Academy Awards. Search interest for Ho increased by over 2,000 percent on the day of awards. A similar growth pattern was seen with Korean-language searches for Martin Scorsese. Importantly, that was after Ho quoted one of his lines (“the most personal is the most creative”).

Most queries were related to Ho himself, though the fifth-most asked question on Google was “who is Bong Joon-ho's translator?” the company said.

Parasite featured the Korean noodle dish ram-don (aka Jjapa Guri). This has also attracted some interest on Google. Particularly, the company has found that searches for “ram-don recipe” have been grown by more than 400 percent globally. Searches for “Asian supermarket” are also up more than 350 percent -- making sense since the film featured some supermarket scenes. Denmark, the United States, Canada, Singapore and Australia were amongst the countries searching the most for Asian supermarket queries.

Notably, Parasite is the first wholly non-English language film to win the Best Picture at the Academy Awards. This is unlike The Last Emperor (1988) and Slumdog Millionaire (2009) that had most of the dialogue in languages other than English but were not wholly non-English titles.

The Oscars win hasn't only resulted in Google search wave but also impacted the overall box office collection of Parasite. The film has already surpassed the mark of $204 million (roughly Rs. 1,457 crores) of ticket sales worldwide. Moreover, various theatres across India are playing Parasite, though the film was originally released in South Korea in May last year.