Netflix is not letting people sign up for its service via its app for iPhone and iPad. The Netflix iOS app also isn’t allowing people to log in with accounts where the subscription has lapsed and no credit or debit cards are linked to the Netflix account, Gadgets 360 has discovered. This means there is currently no way for users of iOS devices to pay for Netflix via the payment method saved on their Apple ID, unless they signed up to do so in the past.

We tried to sign up for a new Netflix account on five different iPhone and iPad units but were faced with a login screen, with the sign-up option absent. As you can see below, the only other available choices are a forgot password option and the help section, which contains links to some frequently asked questions and the option to reach out to Netflix customer service. 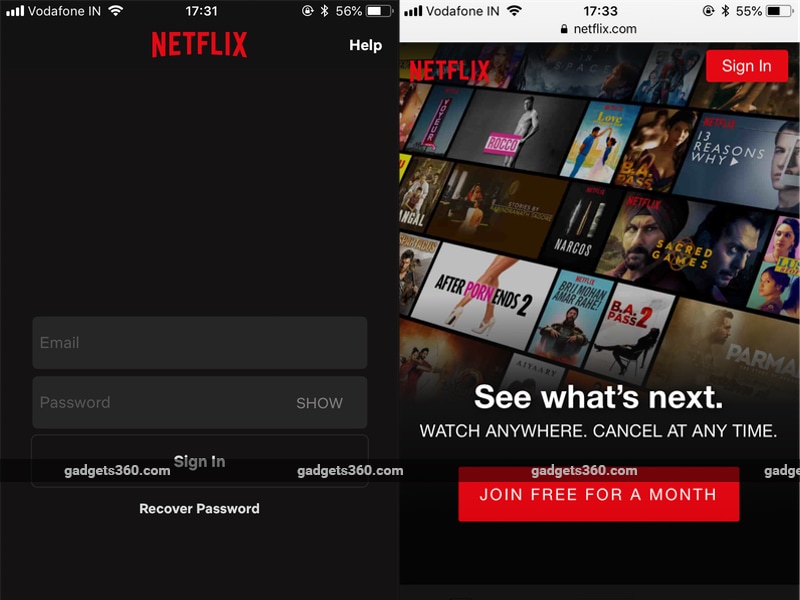 We also tried to log in with an existing Netflix account that doesn’t have an ongoing subscription and payment info stored, and were asked to complete sign-up outside the iOS app. Netflix asks for a credit or debit card when you sign up on the website, which would then exclude you from getting onto iTunes billing. That was confirmed by logging into an existing Netflix account with an ongoing subscription and trying to change our payment details, with the iOS app throwing us off to the website in Safari.

We reached out to a Netflix customer support representative who assured us that iTunes billing is available in India but was unable to figure out why the sign-up option was unavailable and why the app wouldn’t let us log in with an existing Netflix account that doesn’t have an ongoing subscription and payment details stored.

Gadgets 360 also reached out to Netflix for comment on why the sign-up option isn't available in the Netflix iOS app, why existing Netflix users who don't have an active subscription and payment info can't log in through the iOS app, and whether iTunes billing is on its way out.

A Netflix spokesperson responded to say, "We are constantly innovating and testing new signup approaches on different platforms to better understand what our members like. Based on what we learn, we work to improve the Netflix experience for members everywhere."

Back in May, Netflix removed Google Play billing support for new and returning customers, with only those who were already on it able to continue using it. It’s possible that Netflix is taking a similar step with iOS as well, given both Apple and Google charge developers 30 percent for the first year of a subscription, and 15 percent after that.

Netflix was choosing to absorb that revenue hit, but it’s possible it has now changed its mind, just as Spotify did. Of course, developers can choose to offset the subscription cost to customers: Spotify used to do so before it stopped iTunes billing, and Saavn still charges a premium to those signing up via its iOS app. The 30 percent cut is also why Amazon-owned Comixology doesn’t allow you to buy comics or its unlimited subscription from within the app.

Further reading: Netflix, iOS, iPhone, iPad
Akhil Arora Email Akhil Akhil Arora covers entertainment for Gadgets 360, interviewing stars such as Christian Bale and Anurag Kashyap, covering series premieres, product and service launches across the globe, and looking at American blockbusters and Indian dramas from a global socio-political and feminist perspective. As a Rotten Tomatoes-certified film critic, Akhil has reviewed over 150 movies and TV shows in over half a decade at Gadgets 360. When he is not completely caught up with new film and TV releases, Akhil ...More
Paytm Mall Eyes $10 Billion in Annual Gross Sales By March 2019
Samsung India to Launch New Galaxy A Model With 6GB RAM in August: Report