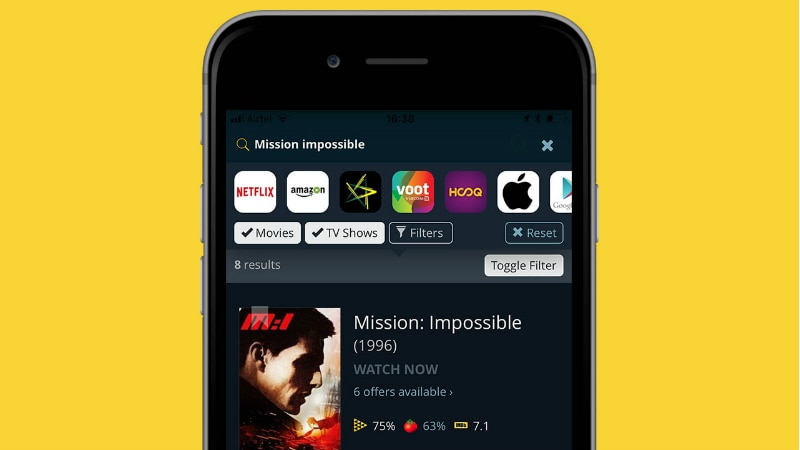 Counterpoint Research has released its December figures for the Indian OTT video streaming market. As per their estimates, the OTT video streaming market in India is currently valued at $280 million (roughly Rs. 1,788 crores) and has about 100 million subscribers. Counterpoint Research estimates a 35 percent year-over-year (YoY) increase in the market that is dominated by Hotstar.

The list comprises two hybrid revenue models (Hotstar and Sony LIV), two subscription revenue models (Prime Video and Netflix), and one advertisement-based player ( Voot). The report also reveals that the Indians still largely prefer free or ad-supported streaming platforms. For instance, only about 2-3 percent of the total subscriber base actually pays for services on Hotstar while about 6 percent of the subscriber base of Netflix utilises the paid subscription - the rest take advantage of the 'free first month' offer. Amazon Prime Video, on the other hand, has a 100 percent paid subscription base, owing to its 'less than $1' (roughly Rs. 64) monthly subscription cost. Notably, this figure was arrived at by dividing the Rs. 499 annual cost by 12, but, the annual Prime subscription has since been revised to Rs. 999 - making it roughly Rs. 83 a month, or over $1. Netflix has the highest subscription cost with a minimum plan of Rs. 500 per month.

The report notes that all the players in the list offer varied kinds of content. While Netflix is focused on a premium audience that prefers global content, Hotstar has a mix of local and global content to cater to different demographics. Additionally, players like Sony LIV and Voot majorly offer local content, a lot of which is sourced from their TV content partners.

Counterpoint Research attributes accelerated user growth to the growing availability of high speed 4G networks in the country. With over 130 million plus smartphones getting Internet access, video consumption on mobiles is expected to grow significantly over the next few years.