Free HD / UHD access and up to four screens at a lower price. 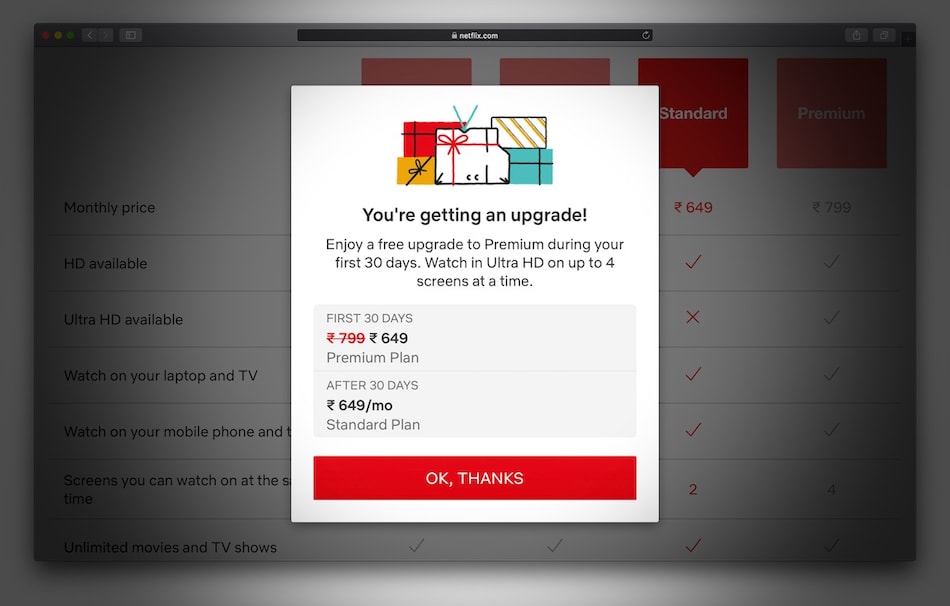 Netflix is offering free one-tier upgrades to a more expensive plan for the first 30 days of your subscription, in what is another new promo by the world's biggest subscription-based streaming service. The offer is only available to new Netflix members, and is applicable to the Rs. 499 “Basic” and Rs. 649 “Standard” Netflix plans. That means if you pick “Basic”, you'll be upgraded to “Standard” for the first 30 days at no additional cost. And if you pick “Standard”, you'll get a month of “Premium”, which otherwise costs Rs. 799 per month.

At the end of the 30-day free upgrade, Netflix will ask members if they wish to stay on the higher plan. From there on, you'll need to pay the usual cost — Rs. 649 for “Standard” or Rs. 799 for “Premium”. If they chose not to pay extra, you'll be demoted to the plan that you originally chose. By giving members a taste of the additional features one tier up, Netflix is hoping to entice users to pay more going forward.

In a statement to Gadgets 360, a Netflix spokesperson said: “We're looking at different marketing promotions in India to attract new members and give them a great Netflix experience.”

Netflix has previously tested free plan upgrades in other markets, and it's currently running the offer in countries outside of India as well. Gadgets 360 has asked Netflix for specifics and we will update if we hear back.