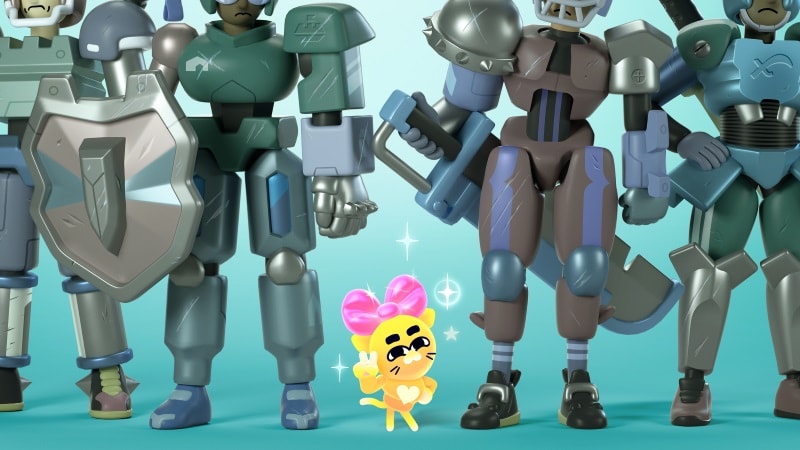 Netflix has announced a new interactive show for kids called Battle Kitty, from Matt Layzell (Sanjay and Craig). Set in “a futuristic-medieval world”, the show is about a “small, fluffy, no ordinary kitty” who “rocks a fierce pink bow” and has “super-strength, monster battling intuition, and amazing accessories”. As with its previous interactive shows for children, audiences will be able to make choices during Battle Kitty, and “navigate their own adventures as they unlock new paths and layers”. Battle Kitty traces its origins to The Adventures of Kitty & Orc on Layzell's Instagram page. Netflix didn't provide a release date.

In a prepared statement, Layzell said: “Netflix has given me the incredible opportunity to help change how young people see themselves. Like Kitty, an aspirational underdog with a big spirit of determination, I want kids who feel small to realize instead that they can stand strong, have friends, and go on to do amazing things.”

“Battle Kitty is a mirror reflection of Matt himself — an inspiring, surprising, and incredibly fun show that is infused at every turn with huge amounts of both humour and heart,” Melissa Cobb, vice president of kids & family at Netflix, said. “This series pushes the boundaries of storytelling in entirely new directions thanks to Matt's innovative interactive format, which will allow kids to engage in an expansive universe together with the most lovable new underdog, Battle Kitty.”

For Netflix, Battle Kitty is the second new interactive announcement in the same week after You vs. Wild, the eight-episode adventure series starring survival expert Bear Grylls. Netflix promised that it would double down on interactive content after the success of Black Mirror: Bandersnatch, and it's already pushing forward on that claim.

After coming through the ranks on Cartoon Network's The Amazing World of Gumball, Layzell made his mark with Nickelodeon's Sanjay and Craig, on which he served as writer, storyboard director, and supervising director across episodes. Layzell has also worked on Cartoon Network's Apple and Onion, and Netflix's Pinky Malinky. Battle Kitty will be his first time as showrunner and executive producer.

At an event in Los Angeles on Tuesday, Netflix gave journalists a peek at another interactive show for kids currently in the making, from Pinky Malinky co-creators Rikke Asbjoern and Chris Garbutt, but it wouldn't name the show or even say whether it was a series or a special. The show is about a cat and a dog who wake up one morning to find that all humans are gone. They then set out to find their human. Viewers will be able to choose between the cat or dog as they follow their adventures.