He made fun of their editing skills and told them to prepare for more “Disney facts”. 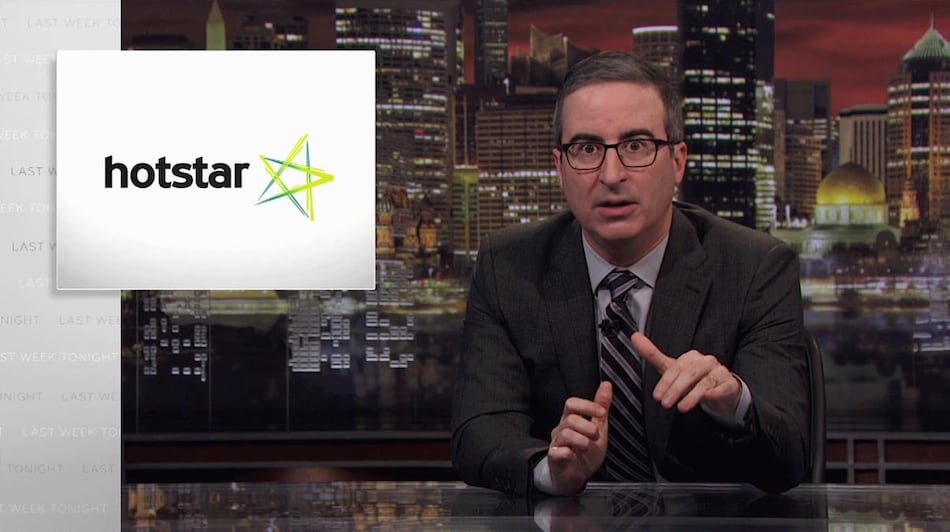 A couple of weeks after Hotstar decided to nuke the Last Week Tonight episode critical of Prime Minister Narendra Modi, host John Oliver has addressed — and blasted — the Disney-owned streaming service's self-censorship ways on the latest episode of HBO's Emmy-winning news satire talk show. Oliver noted that Hotstar has “quietly been doing it for a while now”, having removed several Disney references in the past from multiple episodes. Gadgets 360 first reported on this back in November. Oliver then joked that Hotstar's censoring is pointless since he's the voice of the hornbill Zazu from the new live-action The Lion King — a Disney movie — and promised to slide in more Disney jokes from now on.

On the fourth episode of Last Week Tonight season 7, which aired March 8 in the US — it'll be available March 10 on Hotstar in India, possibly with more self-censorship — Oliver touched upon the response to his PM Modi episode in the opening segment. (Only the main story segment is made available on YouTube.)

He brought in clips from Arnab Goswami's programme, the news anchor who Oliver described as a “die-hard Modi supporter”. On his show, Goswami called Oliver “ignoramus” and “third-rate TV host”, and said he had “embarrassed” himself. Oliver retorted that he's “beyond the capacity of shame”, pointing out the insane things he's done for the show, including the gawky photo of himself used to promote season 7.

“The interesting thing about [Goswami] scolding me is that [PM Modi] episode didn't actually air in India,” Oliver then added, switching gears. “There's no evidence that the Indian government made them do that. At best, we can tell that Hotstar just decided to self-censor, which is still not good. And what's worse is, it's apparently not even the first time that they have censored us. We've discovered that they've quietly been doing it for a while now, but not for the reason that you might expect.”

Oliver then played clips from two previous Last Week Tonight episodes — season 6, episode 30 about the US Census, and season 6, episode 25 about China's one-child policy — wherein Hotstar had cut out references to Disney that it didn't like. Oliver made fun of Hotstar's terrible editing skills by mimicking it and simultaneously sarcastically noting how it “fits so seamlessly into the familiar rhythms and consistent visual style of this television show.”

Oliver added that Hotstar seems “extra-sensitive about Disney references” — his jokes involved Mickey Mouse and Donald Duck — and concluded: “Let me say this to Hotstar right now. If you think you have to remove anything that reflects poorly on Disney from this show, I have some bad news for you, my friends: I am f—ing Zazu right here. Everything that comes out of this beak is a Disney fact.”