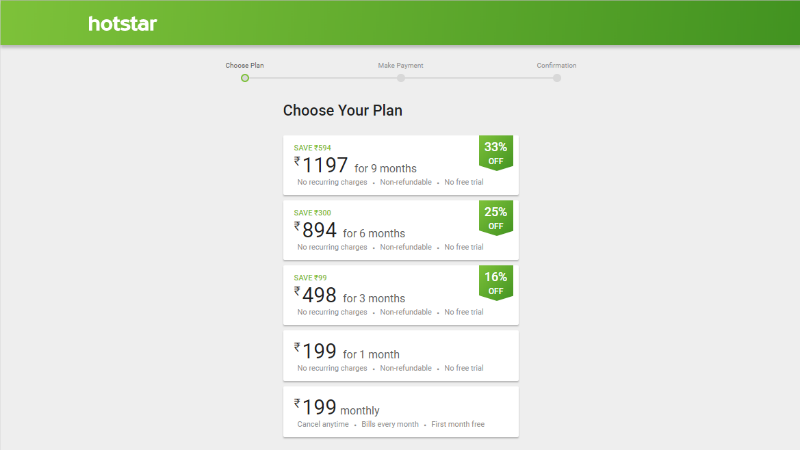 Hotstar is offering long-term plans at value-for-money rates in a bid to get more subscribers on board. The Star India-owned video streaming platform has three new plans, with commitment of at least 3 months, under which users will get the service at a lower than its regular charges. So instead of Rs. 199 per month, consumers can use Hotstar at an effective tariff of Rs. 133, but with a commitment of 9 months. Hotstar competes against the video-on-demand platforms such as Netflix, Amazon Prime Video, Hooq, etc., in India.

Indians Consume the Most Online Video Content in APAC: Akamai

With the Rs. 199 plan with recurring billing, a new user is given a 30-day free trial. However, the three new Hotstar plans do not have the free trial provision, and are non-refundable. The whole sum - Rs. 498, Rs. 894 or Rs. 1,197 - needs to paid in full at the time of subscribing. These plans are not recurring, and so will not be renewed at the same prices when the validity expires. Existing users of Hotstar will need to cancel the ongoing subscription and then select one of the new long-term plans in order to avail the savings.

While indeed priced lower than the standard tariffs, it is still roughly double of the discount Hotstar gave in October, when it offered a 12-month subscription for Rs. 696.

WeChat Plans to Resurrect Tipping Button After Agreement With Apple