As what could be part of a bigger ploy for the Disney-owned streaming service.

Hotstar has introduced a new “Kids” button to its website that filters age-appropriate content, bringing a form of parental control for the first time to India's leading streaming service. (It's not available on any of the Hotstar apps, at the time of writing.) Unlike the likes of Netflix and Amazon Prime Video, Hotstar has never had an age restriction feature, nor has it shown any interest in building a dedicated app, as with YouTube Kids and Voot Kids. Though the yellow-coloured logo suggests the Disney-owned streaming service might be working on a “Hotstar Kids” app. Gadgets 360 has reached out to Hotstar for comment.

With the family-friendly Disney+ poised to enter India in March — Hotstar will be rebranded as Disney+ Hotstar — having taken control of Star India last year as part of its $71.3 billion acquisition of Fox's film and TV assets, this is as good a time as any to launch a kids-friendly section. A bunch of Disney titles, from the classic The Lion King and Aladdin to Pixar hits such as the Toy Story trilogy and Finding Nemo, are available on Hotstar. Propelled by the strength of the Disney back catalogue, the launch of Disney+ will no doubt bring in more kids' content to Hotstar. But there's no sight of any originals as yet.

Children's entertainment is a huge market globally, especially India, where the first video to hit a billion views on YouTube — still the leading platform locally, since it's completely free — was a nursery rhymes compilation. The video came from ChuChu TV, which has claimed that it wants to be “the next Disney”, and has amassed nearly 40 million subscribers and over 23 billion views on creating content just for kids up to the age of seven. Amongst streaming services in India, Viacom18-owned Voot was the first major player to launch a dedicated app with the aforementioned Voot Kids.

The “Kids” mode on Hotstar signals the first step in what could be a broader push. 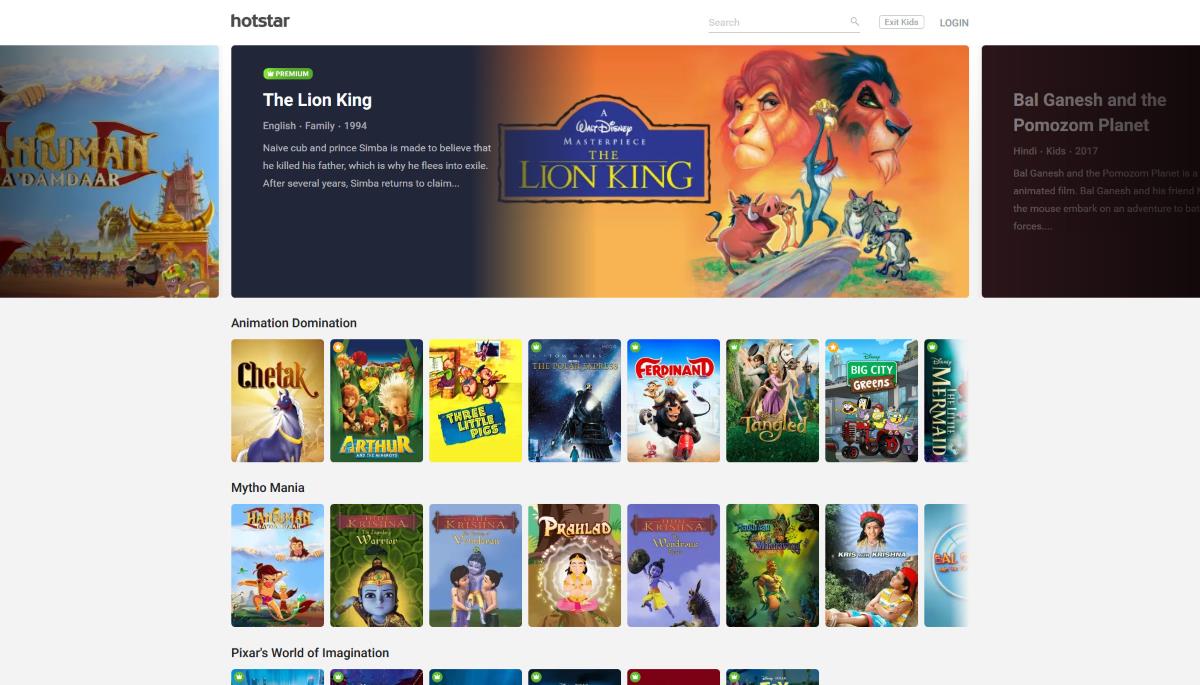 What happens once you click the “Kids” button on Hotstar
Photo Credit: Hotstar

Further reading: Hotstar, Hotstar Kids, Disney, Disney Plus, Disney Plus Hotstar, Star India
Akhil Arora Email Akhil Akhil Arora covers entertainment for Gadgets 360, interviewing stars such as Christian Bale and Anurag Kashyap, covering series premieres, product and service launches across the globe, and looking at American blockbusters and Indian dramas from a global socio-political and feminist perspective. As a Rotten Tomatoes-certified film critic, Akhil has reviewed over 150 movies and TV shows in over half a decade at Gadgets 360. When he is not completely caught up with new film and TV releases, Akhil ...More
Vivo Z6 5G With Snapdragon 765G SoC, Quad Rear Camera Setup Launching Later This Month
EU Proposes Rules for Artificial Intelligence to Limit Risks