Dolby Vision is on its way, with HDR10 the only supported HDR format as yet.

Disney+ Hotstar has begun rolling out support for 4K UHD (ultra-high-definition) resolution and HDR (high-dynamic-range) video, with select few Disney+ originals — including the likes of the Star Wars series The Mandalorian and the Willem Dafoe-starrer Togo — now available in 4K and/or HDR. Look for “4K UHD” and “HDR” icons below the title description, as in the picture above, to discover 4K HDR content on Disney+ Hotstar. Gadgets 360 spotted 4K HDR support on Android TV and Apple TV, and we've reached out to Disney+ Hotstar for comment on whether 4K HDR will be available on Fire TV and other smart TVs, and HDR will be available on Android and iOS.

4K has been in internal testing at Disney+ Hotstar for a couple of months, with the official Twitter handle saying as much to user queries. It's unclear if that included HDR as well. Either way, Disney+ Hotstar has expanded 4K HDR beta testing to the wild now. For the geeks amongst you, the only HDR format being supported at the time of writing is HDR10, according to our tests. That said, Disney+ Hotstar will have support for Dolby Vision as well, with Dolby president and CEO Kevin Yeaman saying as much in the company's quarterly earnings call earlier this week. 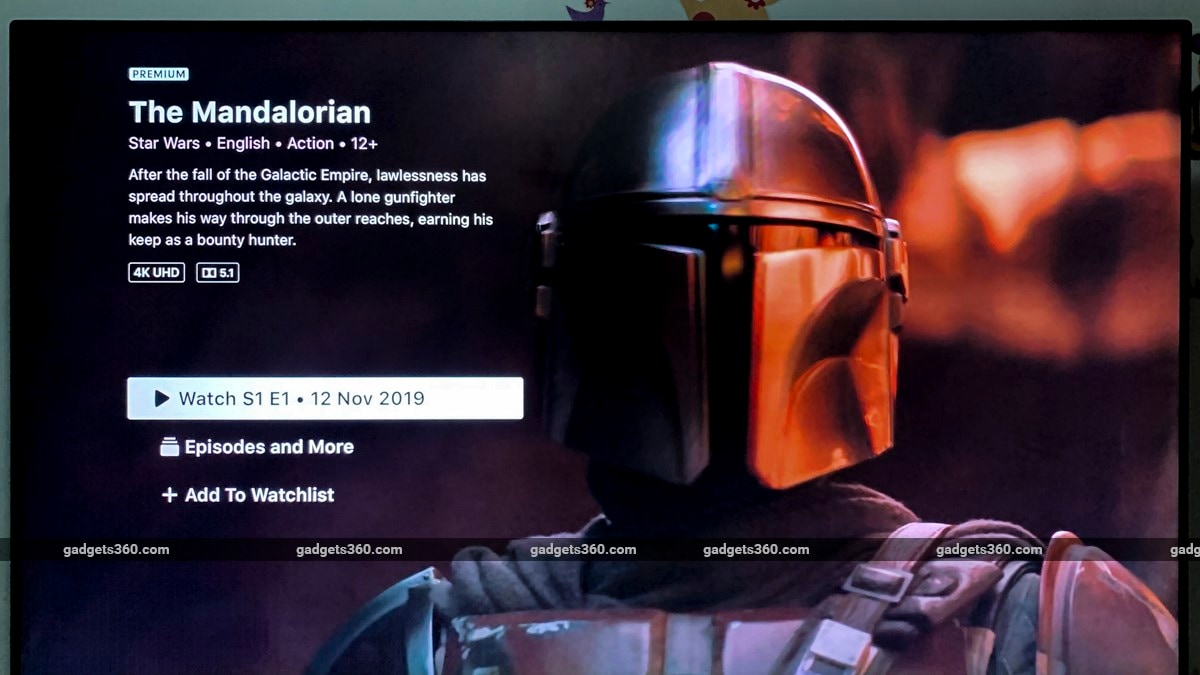 The Mandalorian, only in 4K, on the Disney+ Hotstar Apple TV app
Photo Credit: Harpreet Singh/Gadgets 360

Additionally, Disney+ Hotstar is going with a slow rollout for 4K HDR, given not all Disney+ originals are available in upgraded resolution and dynamic range as yet. While Togo is being offered in both 4K and HDR, The Mandalorian is only displaying 4K for now. For what it's worth, a slow rollout is in line with past practices, including the Disney+ Hotstar app and Dolby Digital 5.1 surround sound. Expect the list of 4K HDR titles to grow over time, as was the case with surround sound, support for which has grown to a couple of hundred Disney+ titles — and Android TV — since its initial launch in April.

With the arrival of 4K HDR, Disney+ Hotstar continues its push to become more technologically capable and align itself with the times. But problematically, it's still massively restricted. Surround sound support has yet to expand beyond Disney+ originals, and you can bet the same will go for 4K HDR support too. More importantly, Disney+ Hotstar has yet to expand surround sound support beyond TV, a frustration given the likes of Netflix offer it on computers too. Netflix also offers HDR on phones and computers, and hopefully, Disney+ Hotstar will strive to do that as well.

For now, this is a good start. Now maybe Disney+ Hotstar can work on 60fps support for live sports.

Further reading: Disney Plus Hotstar, 4K, HDR, Dolby Vision, Star India, Disney India, The Mandalorian, Togo, HDR10
Akhil Arora Email Akhil
Akhil Arora covers entertainment for Gadgets 360, interviewing stars such as Christian Bale and Anurag Kashyap, covering series premieres, product and service launches across the globe, and looking at American blockbusters and Indian dramas from a global socio-political and feminist perspective. As a Rotten Tomatoes-certified film critic, Akhil has reviewed over 150 movies and TV shows in over half a decade at Gadgets 360. When he is not completely caught up with new film and TV releases, Akhil ...More
Google Assistant Getting ‘Family Bell’ Alarms, Enhanced Broadcast Feature
Government Said to Widen Chinese App Ban to Include More From Xiaomi, Baidu